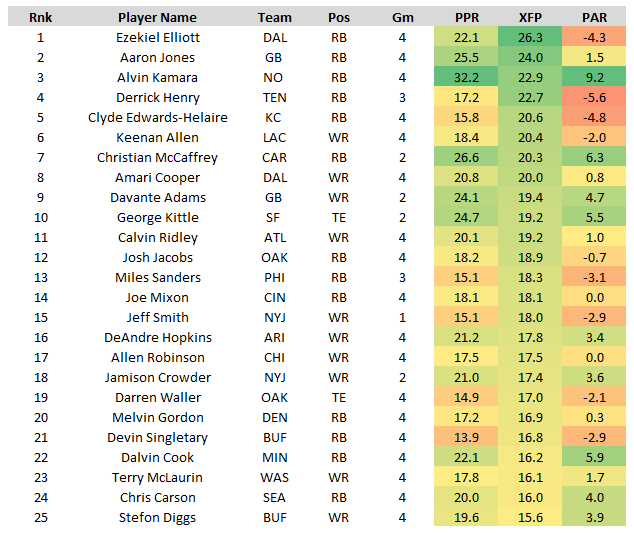 For the 4th consecutive week in a row, Green remains our top regression candidate – now falling a whopping 33.9 fantasy points behind his expectation – but he’s far less enticing now than he might have a few weeks ago. Through the first two weeks of the season, Green led all WRs in XFP per game (21.0). Over the last two weeks, he ranks just 60th (8.9). Coinciding with that dip in volume for Green was an increase in volume for Tyler Boyd and Tee Higgins, who rank 8th (16.6) and 12th (15.1), respectively, in XFP per game over the same span.

Even after the last two weeks, Green still ranks 3rd in air yards per game (119.6), but he ranks just 106th in receiving yards per game (29.8). That’s uhhhh…. Not good. Earlier in the season, it was easy to make excuses for Green: “Well, the volume is there. He didn’t practice much in the offseason, so rapport with Joe Burrow will take time to develop. He’s a little rusty.” Even Week 4’s dud could be explained away, facing shadow coverage from Darius Slay. But it might be time to stop making excuses for Green, and turn our attention instead to Tyler Boyd and Tee Higgins who are now seeing good usage, and are producing on that good volume.

Elliott is seeing unreal usage. Usage comparable only to the best seasons from Christian McCaffrey, LaDainian Tomlinson, Le’Veon Bell, and Marshall Faulk. Through the first four weeks, Elliott has finished 7th, 1st, 1st, and 4th among RBs in XFP. He leads all players in XFP per game (26.3), ranks first among RBs in snap% (88.7), and is averaging 17.5 carries and 7.5 targets per game.

Elliott is a true bell cow – as evident by the 88.7% snap share and 7.5 targets per game – and as such will not be game script-dependent like a Kenyan Drake (16.8 carries, 1.3 targets per game), he’ll still be productive in losses but he will still be much better off in games with positive game script. (Unless you’re as capable of a receiver as Christian McCaffrey or Austin Ekeler, it is better for a bell cow to play behind positive game script. Over the past three seasons, winning teams average 26.6 fantasy points per game at the RB position. Losing teams average 20.8.)

All this to say Elliott has been disadvantaged by negative game script thus far, with Dallas leading on just 2% of their offensive plays. Their defense may be apocalyptically bad, but it’s still bound to regress. He’s also gotten a little unlucky in the touchdown department, totaling just three rushing touchdowns vs. an expectation of 5.5. That’s also bound to regress. And this would be a great week for it, favored by 9.5 points against a Giants team that ranks dead-last in points scored per game (11.8).

The key takeaway is this – Elliott is easily now one of the most valuable assets in fantasy, maybe the most valuable asset in fantasy. And we haven’t yet seen him reach his true potential in an offense that ranks 2nd in net yards per drive (41.6) and 1st in plays per game (77.2). He’s my top regression candidate to target in DFS this week, and my top regression candidate to target in season-long via trades.

Everything we just said about Elliott is almost equally valid for Sanders. He ranks 9th in XFP per game (18.3) but just 21st in FPG (15.1). He ranks 4th in Snap% (77.8%) and 5th in target share (16.1%), averaging 17.0 carries and 6.3 targets per game. Like Elliott, he’s a true bell cow, but is being a bit disadvantaged by game script – Philadelphia has led by a field goal or more on just 9% of their plays since his return. Unlike Elliott, his true potential is also being held in check by a wholly inept offense. Only one team has seen fewer red zone drives than Philadelphia’s 10. The regression is coming, but not this week – it’s been 22 months since Pittsburgh last allowed a 100-yard game to an opposing RB. If he flops again, like I suspect he will, Sunday night will be a great time to send out a trade offer.

Historically-speaking, Henry has been far more a workhorse than a bell cow, ranking highly in carries per game, but often leaving the field in negative game script and on obvious passing downs. But that hasn’t been the case this season, with Henry playing on 75%, 71%, and 75% of the team’s snaps. Even so, he’s still not doing much as a receiver, totaling just 26 receiving yards through three games. So, even if Darrynton Evans carves out a role as the team’s scatback, it might not hurt his numbers too much. But he’s going to be very game script-dependent regardless.

So, he is a regression candidate, but maybe not this week, as the Titans are likely to be without 9 starters in a tough matchup against the Bills.

Smith-Schuster’s concerns are two-fold: 1) His production has been a great deal better than his volume implies (+7.5), suggesting a looming regression to the mean. 2) His volume really hasn’t been great. In fact, had Diontae Johnson not suffered a concussion early in their last game, I wonder how much we’d be talking about Smith-Schuster. He ranks just 61st among WRs in XFP per game (9.5), while Johnson posted totals of 17.0 in Week 1, 20.3 in Week 2, and then 4.5 after exiting on the team’s first drive in the second quarter. However, reader beware -- you should know my biases.

There are only 3 running backs earning at least 90% of their team’s carries and at least 10% of their team’s targets: Ezekiel Elliott, Christian McCaffrey, and James Robinson, who ranks 9th in FPG (19.2). Robinson’s usage is very good, but it’s not as great as these numbers might imply – he ranks 20th in XFP per game (13.6), and fellow Jaguars RB Chris Thompson has run more routes on the season (76 vs. 62). However, usage tilted even more towards Robinson’s favor last week, running 27 routes to Thompson’s 13. Although he is a top regression candidate by PAR (+5.5), he’s not a sell-high – public sentiment is still lower on him than where I’d have him (high-end RB2).

For DFS this week, one of two things will happen – 1) Robinson and his 15.0 carries per game (94% carry share) will smash against Houston’s wimpy run defense, which ranks 3rd-worst in YPC allowed (5.38) and worst in rushing FPG allowed per game to opposing RBs (25.3). 2) They’ll get behind early as Vegas seems to imply they might (6.5-point underdogs), capping his upside and leaving him on the bench for about 30-50% of the team’s plays.

In one episode of Hard Knocks, QB Justin Herbert pulled Allen aside and said, “My job is to get you the ball. I’m your assistant. Think of it that way.” And he’s been quite the assistant – Allen now leads all receivers in target share (37%), XFP market share (28.1%), and XFP per game (19.1). Coming off of a tough matchup against the Buccaneers, he gets the Saints this week, who might again be without top CBs Marshon Lattimore and Janoris Jenkins.

Kittle led the league in XFP in Week 4, which maybe wasn’t so surprising given who the starter was. When Jimmy Garoppolo starts, Kittle sees high-end TE1 volume. When Nick Mullens starts, Kittle sees Michael Thomas-esque usage. Still, in a brutal year for the TE position, he could remain one of the most valuable assets in fantasy, even following Garoppolo’s inevitable return.

Don’t look now, but Davis ranks 2nd among RBs and 3rd among all players in XFP per game (23.3) since McCaffrey suffered an injury in Week 2. Over this span, he’s averaging 73% of the snaps, 14.5 carries, 7.5 targets, 3.0 opportunities inside the 10-yard-line, and 19.0 fantasy points per game. With Reggie Bonnafon out for Week 5 (9.6 XFP in Week 4), and Trenton Cannon the only other RB on the active roster, look for even better volume this week. As a (probably) league-average talent we should continue to see around league-average efficiency, but he should continue to put up mid-to-low-end RB1 numbers so long as he continues to see McCaffrey-type usage.

- It seems unlikely Zack Moss sits out again this week, but know that whenever he does miss time, Devin Singletary is likely to draw top-5 usage. Over the last two weeks, Singletary averaged 20.5 XFP per game (3rd most), on the back of an 89% snap share (most).

- Jerick McKinnon has similarly benefited from injuries (to Raheem Mostert and Tevin Coleman) – in Week 4, McKinnon led all RBs in Snap% (92%) and ranked 6th in XFP (21.2). - Similarly, although David Montgomery totaled just 13.4 XFP in Week 4 (with Tarik Cohen out), he ranked 3rd in Snap% (85%), earning 10 carries and 6 targets in a game Chicago trailed throughout.

- Similarly (again), Ronald Jones was a true bell cow following injuries to RBs Leonard Fournette, LeSean McCoy, and Kenjon Barner. In Week 4, he led all RBs in XFP (26.1), with a whopping 20 carries and 9 targets.

- Allen Robinson has ranked top-6 in XFP in back-to-back games. Interestingly, those two games came against two of the three best defenses against opposing WRs. His Week 5 matchup (Tampa Bay) ranks about average. - As we predicted would happen, Joe Mixon smashed in Week 4, playing behind a great deal of positive game script, but his usage was even better than expected. He earned 83% of the snaps (4th-most on the weeks), earning 25 carries and 6 targets on 25 routes. Giovani Bernard, meanwhile, had just 2 carries and 0 targets on just 5 routes. Mixon now ranks 10th in both XFP per game (17.9) and FPG (17.7). 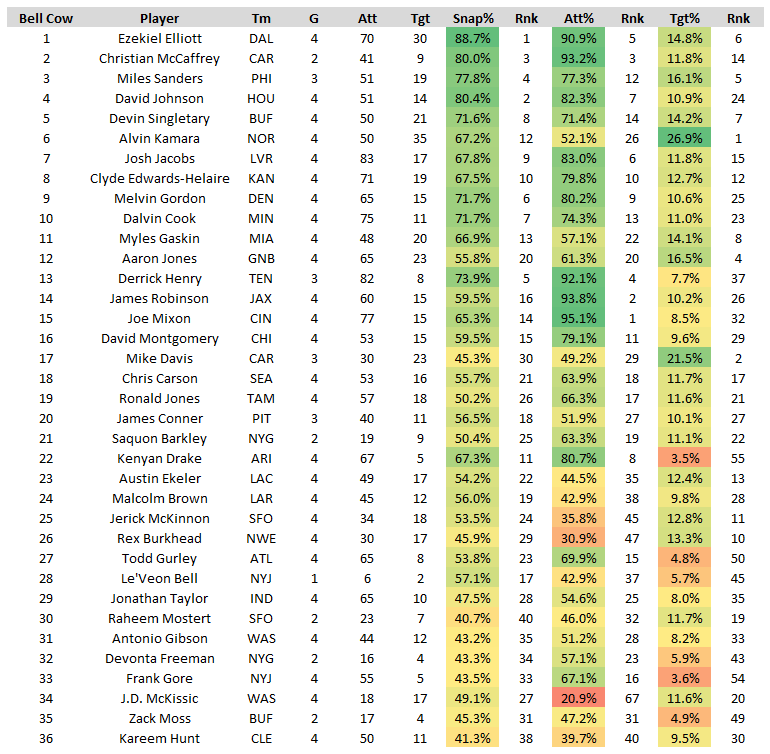