Welcome to the Fantasy Points Generator!

The Fantasy Points Generator (FPG) is a fantasy football tool that uses intelligence and analytics to make optimal recommendations for each of your picks to maximize your startup/keeper draft.

The Fantasy Points Generator has been developed specifically to be your own Fantasy Points expert as your companion while you draft! The Fantasy Points Generator (FPG) is constantly updated with the latest Fantasy Points projections and Average Draft Position (ADP) data to smartly and dynamically recommend the best players for your team in real time, so you can build both the best and most efficiently drafted roster in your league. The tool knows both which players to target and when to target them, so you don't give up too many points at another position to reach for that sleeper you really like. Additionally, if you want the FPG to focus on specific positions for its recommendations, it gives you that ability! The FPG is currently set up to handle both snake and third-round reversal drafts, with the ability to adjust to the number of teams, roster spots, and FLEX positions your league has. It has multiple preset scoring systems to closely replicate your league's settings, as well. Oh, and while the FPG is designed mainly to be used in conjunction with your live draft, it also has the ability to mock draft, so you can prepare for your upcoming draft by making selections against an algorithm that's also making optimal decisions based on Fantasy Points projections and ADP. Prepare to #ScoreMore Fantasy Points.

We've worked hard to make a draft tool that is EASY to use, and we can explain the whole process on these three introductory pages. For more info and insight on using the tool, check out our YouTube page for a tutorial video.

The tool as it's been described so far is already a very advanced fantasy football draft program that uses various algorithms and analytics to maximize your draft, but there are more features which make this tool totally bad-ass!

Show Only Upside / Target / League Winner - With this feature, you can always have us by your side when looking to be aggressive on upside players, wanting to see only the players that we recommend targeting at their ADP, or even the players we have dubbed as "League Winners." League winners are flagged by our logo, players we're targeting will show a small target icon, and players we think have upside to out-produce our projections are marked with an arrow up.

Advanced Analytics - And here is perhaps the most valuable feature of the software for power users. At any time during the draft, click the "Advanced Analytics" tab on the upper left side of the page. On this page, you will see the best 3 picks for the round listed by position. In addition, it will show you the expected best player available to you in the next three rounds at each position if you wait on taking a player at that position with your current pick. You can really understand which players or positions you should take now and which players or positions you can bypass based on the next best players available to you in the next 1-3 rounds. 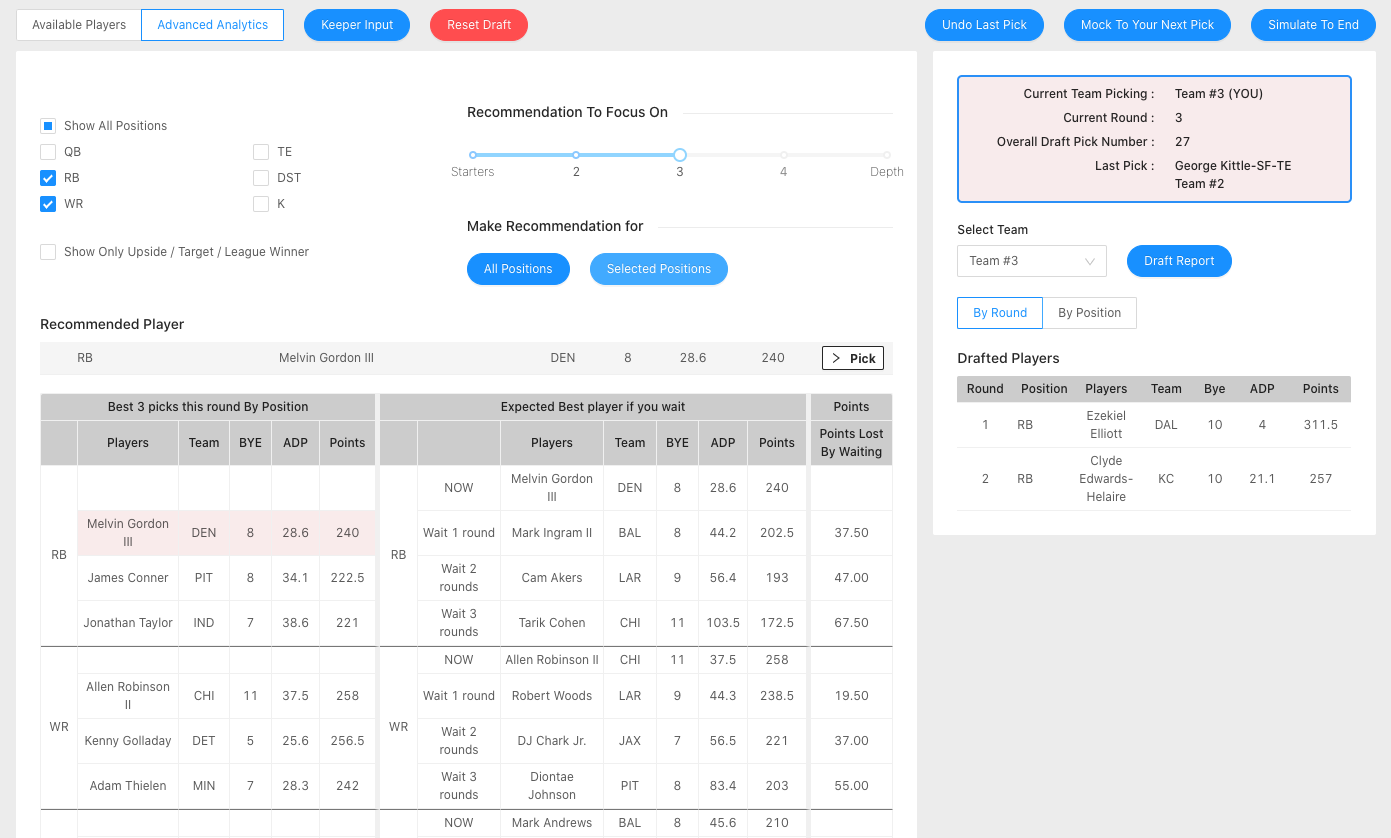 Finally, the tool will even let you know how many points you are likely losing out on by passing on a certain player or position. For example, if you lose 25 points by waiting a round to draft a specific RB, but only 2 points for waiting for a WR, then you can see that the RB makes more sense in the current round. The tool actually predicts forward 6 rounds (weighting the next 2-3 rounds higher) when figuring out the best pick. But we only show 3 rounds for the end-user to make it easier to understand. It's important to note this is PREDICTED points lost. If there was an unusual run on QBs in the first round, the actual points lost would be higher for QB than predicted and lower for other positions.

For more information, check out our Q & A with the tool's designer, Clark Bundy of Bellwether Analytics.

Q: Hey Clark! Can you give our subscribers a brief overview of your background and what you mainly do for a living?

Hi John! I'm the founder and partner of an analytics and strategy consulting firm called Bellwether Analytics. I've spent 20+ years in strategy consulting. Most of my work is in the life sciences industry, helping companies solve complex business problems and improve strategic decision-making. I'm a data nerd, but what we really focus on is taking complex analytics and making it easy for anyone to understand and use. In other words, I want people to utilize the power of data without needing a graduate degree in analytics! When it comes to fantasy sports, I started to get really involved about fifteen years ago - with so much information out there, it's a place where analytics can make a huge difference, but it's also a place where it has to be easy to use - when you have 30-60 seconds to make a draft pick, you can't take time to plow through a complicated spreadsheet!

Q: So your background is in data and analytics, and you have a passion for fantasy sports, but why do you think working with us as opposed to another company is right for you?

Working with Fantasy Points is a no-brainer. Analytic tools are only useful if the data being fed into it is high quality, and you guys are the best in the business when it comes to the football and fantasy knowledge side of things. Without top-notch data, you just end up with "garbage in, garbage out." That's why I'm so excited to work with Fantasy Points. When we combine the Fantasy Points team's football knowledge with the analytics in this tool, you get the best of both worlds.

Q: I'm sure you've seen comparable tools out there, but what makes the FPG tool different and/or better than the other products in the industry?

There are three areas where this tool is best-in-class:

Ease of use: We designed this to be super easy to set up and use. It's easy to find players, adjust scoring systems, get recommendations, and see the impact of alternate strategies. This is crucial when seconds count to make your picks!

The analytics running behind it: I'll discuss it more below, but the tool takes many factors into account when making its recommendations, and this combination of factors leads to great recommendations. And yet, at the same time, the tool allows you to use qualitative information, such as the Fantasy Points League Winners and Players to Target, to find that ideal player for your team at any point in the draft.

We like saying the tool is like having the Fantasy Points team in the room with you when you draft - that really was the goal when we designed it.

Q: Do you think there's a lot of value in the tool in terms of practicing drafting against the software? Can practicing make you a better drafter?

Yes, definitely. It will help you try out different strategies and see how your teams pan out. For example, you could draft once just using the "Make Recommendation" button alone to build a team, then compare to building a team making selections on your own. You can even try mocking out drafts from different draft slots to see if there's a preferred draft slot for your league type and rules.

Q: You have seen our introductory text that explains this tool in detail, but for advanced users and data nuts like yourself, can you give us your "Geeked up" overview of what this tool is?

Sure - I would suggest anyone read the introductory text first, because that is really all you need to know, but for those interested, here's a bit more info on the tool's overview. While we could talk about the ease of use, ability to use different scoring systems, and other areas, I suspect the "data nuts" are most interested in how the "make recommendation" button arrives at it's recommendation. While this gets very complex, at a high level, the way the tool thinks is it:

It does all this in just one second's time, so you don't have to worry while "on the clock". If you want a glimpse into how the "make recommendation" button works in real time, take a look at the advanced analytics page. It shows you a bit of the data, including the expected players available in the next three rounds.

One comment we get - sometimes the recommendations may seem "wrong" to an experienced fantasy player. For example, you may see that it recommends a QB in the second round, if his projections are way ahead of other QBs (ahem, Patrick Mahomes). While that is the "correct" pick if you have a bunch of average fantasy players (where you'll be able to find a bunch of huge values at RB and WR in later rounds), you may know you're in a league with several sharks. In that case, you may want to turn off QBs for your second round recommendation - if you do that, it'll make recommendations based on the other remaining positions.

The way we put it is this - just blindly using the "make recommendation" button will give you a really good team. But if you combine that with knowledge from the rest of the Fantasy Points site, you'll have a great team!

Q: As the lead developer and a fantasy veteran, how would you use this tool for your drafts?

Then, on draft day, in the early rounds, I will almost exclusively use the "make recommendation" button. There are places where I would go off the recommendation (for example, the tool doesn't incorporate bye weeks or real-life NFL teams yet), but I would need a good reason to not pick the recommended player.

In the later rounds, and I suggest all players do this, I would turn on the "Show only upside/target/League Winners" option - I love to load up on the players the Fantasy Points team has identified as targets later in the draft. If just one or two of those guys I take a flier on in the 10th-17th rounds explode, I'll win my league.

Q: Any other thoughts or closing statements, Clark?

I'm really excited to hear from people who use the tool! Feel free to reach out at bellwetheranalytics.com or email us at [email protected] And if you work in an industry that's looking to incorporate analytics and analytical tools to improve your strategy, please reach out to me - I live for this stuff and would love to chat!

Thanks for your input and insight!

P.S.: We plan on using Clark to develop 2-3 other comparable tools, such as a DFS optimizer and an Auction Draft tool (that one definitely in 2021, though).

We Want Your Feedback

We are excited to release our Fantasy Points Generator Draft Tool and want your feedback! Providing us with accurate information regarding your use of and experience with the FPG will help us fix bugs, make tweaks, and optimize the user experience. We appreciate any and all information you can provide us with, so we can improve upon this tool and help our subscribers maximize their draft potential. Please note that we may reach out to you for further questions after you submit the form.