In yesterday’s article we revisited an important concept in fantasy football, something known as the Konami Code – a borderline cheat code for drafting fantasy quarterbacks, applicable only to the league’s most prolific running quarterbacks. Today, we’ll be looking at all quarterbacks who might qualify (roughly 5.5 rushing attempts per game) in 2021, and which ones are worth prioritizing come draft day. 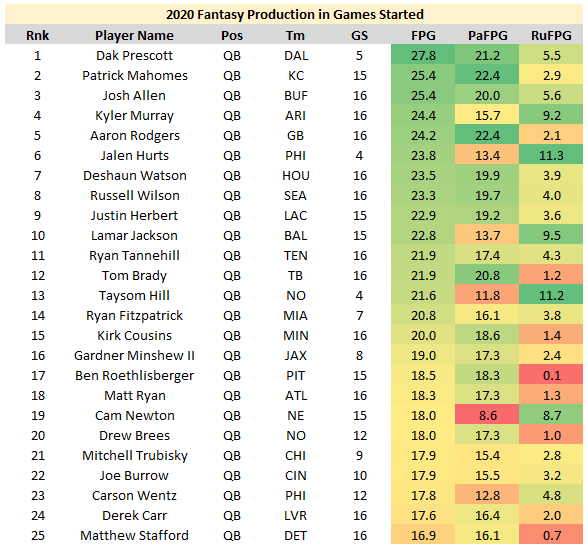 Jackson took a step back in 2020, finishing 9th in FPG (22.2) but I'm bullish on a rebound in 2021. Baltimore rarely needed to keep their foot on the gas last year, leading the league in point differential (+165) and by a sizable margin (+20 more than the next-closest team). And the passing game should be far more potent this year, following the arrivals of Sammy Watkins and Rashod Bateman. That’s notable because while Jackson’s rushing production remained largely unchanged (10.8 rushing FPG vs. 9.5), he did see a steep dropoff in passing FPG (17.1 vs. 13.1).

While Jackson is the all-time Konami Code GOAT, Kyler Murray really might not be too far behind.

Murray ranked fifth in total FPG last season (23.7), and averaged 9.3 FPG on the ground which ranks sixth-most by any QB in any season since 1975. But his numbers look even more impressive if we adjust for a shoulder injury suffered in Week 9. Murray averaged 30.1 FPG and 12.8 rushing FPG from Weeks 1-9, but only 18.8 FPG and 5.7 rushing FPG following that injury. For perspective, both early-season marks would be NFL records, besting Jackson’s 27.7 FPG and 10.8 rushing FPG, both set in 2019.

What happened here? Is this just random variance or an overdue regression to the mean? Or, was HC Kliff Kingsbury playing it safe with his banged up QB? (Murray went from averaging 7.0 rushing attempts per game to 4.6 following the injury.) I’m not entirely sure, but clearly Murray has massive upside should he remain healthy.

Last season, Jackson gave you just 60% of Patrick Mahomes’ passing production. And Mahomes gave you just 30% of Jackson’s rushing production. But Josh Allen was 90% Mahomes as a passer (20.0 FPG) and 50% Jackson as a runner (5.6 FPG). In other words, he led the position in fantasy points scored with 405.7 (the fourth-most by any QB all-time), averaging 25.4 FPG.

While Allen has made leaps and bounds as a passer (9.2 passing FPG as a rookie to 12.2 in 2019 to 20.0 last year), he has somewhat regressed as a runner, averaging 5.6 rushing FPG last year as opposed to 7.7 over his first two seasons. Still, it’s good to know he has Jackson levels of rushing upside if he needs it (9.9 rushing fantasy points per start as a rookie). And that might be important this year, as a massive regression as a passer feels inevitable (his 6.5% TD rate doesn't seem at all sustainable) like it was for Jackson last year. Still, even with a regression baked in, we have Allen ranked behind only Mahomes in our projections.

In 2021 redraft leagues, my QB targets are (in order, and currently at cost): Jalen Hurts, Jameis Winston/Taysom Hill paired, Trey Lance, and then Matthew Stafford. With Hurts, I’m getting major “Lamar Jackson 2019” vibes, who you may remember was my No. 1 must-draft player that entire offseason and who I bet to win MVP multiple times throughout the summer. While Hurts has zero shot at winning MVP, I could see him being something of a fantasy MVP. 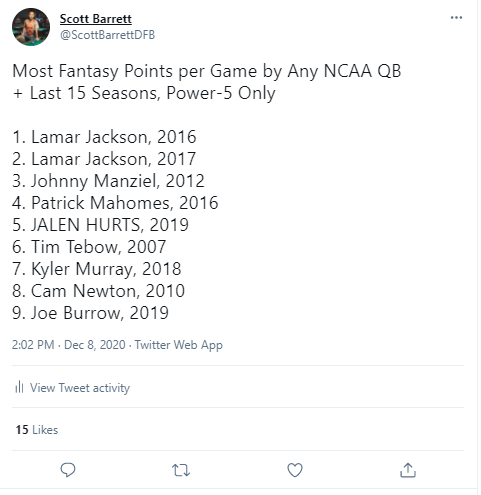 And like Lamar Jackson and Kyler Murray, Hurts was hyper-productive in college as well. He averaged 101.6 rushing YPG and 18.7 rushing FPG in his final season of college. That's significantly better than Murray (76.5, 12.8) and better than any recent QB minus Jackson (135.2, 21.8).

There will be a brand-new offense in Philadelphia, which could be a concern, but Hurts will also have a full offseason taking first-team reps as a starter. And the team added Heisman Trophy winner DeVonta Smith in Round 1. That should help. Due to a massive amount of injuries, Philadelphia's three most-targeted receivers last year were Greg Ward, Zach Ertz, and Travis Fulgham.

If I can’t get Hurts, I like stacking Jameis Winston (ADP: QB27) and Taysom Hill (QB32) for cheap. Current odds imply there’s about a 60% chance Winston starts Week 1 versus a 40% chance for Hill. I think those odds are fair.

Winston ranked 7th in fantasy points per start in 2019 (21.0) and 10th in 2018 (20.5). It’s hard to imagine the hyper-aggressive Winston won’t be able to find success in a Sean Payton offense. And it’s even possible he could be an improvement on a 41-year-old noodle-armed Drew Brees.

And if Hill does become the starter, I expect an improvement on these numbers. This is his first offseason training and practicing exclusively at QB, and he would have the offense more tailored to his skillset. Lamar Jackson wasn’t set up for success as a rookie, not really fitting into an offense designed for Joe Flacco. He then exploded as a sophomore in an offense designed for him to succeed. I can envision something similar for Hill if he outplays Winston in training camp.

As I alluded to earlier, Trey Lance is one of my favorite targets in redraft leagues. And even though, yes, Lance is no guarantee to start in Week 1 (though that may be what HC Kyle Shanahan is rooting for.) Still, I have a hard time imagining Lance isn’t the team’s full-time starter by at least mid-season. And, further, I have a hard time imagining he doesn’t put up top-12 numbers on a per-game-basis once he does inevitably take over. 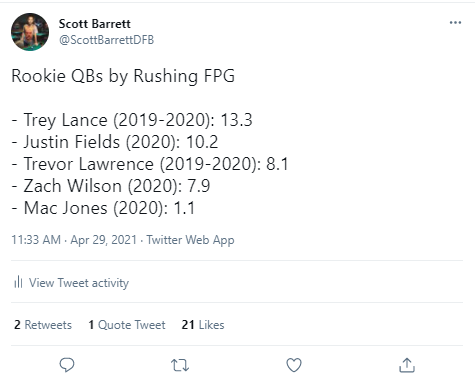 First off, Lance has massive Konami Code-upside. He averaged 13.3 rushing FPG over his last two seasons at North Dakota State — that was significantly more than any other rookie QB, and was also more than what Kyler Murray put up in his Heisman season at Oklahoma (12.8 rushing FPG).

Second, he landed in a dream scenario, coached by Shanahan and surrounded with an elite receiving corps. Since 2018, Russell Wilson averages 7.8 yards per pass attempt. That’s less than both Nick Mullens (7.9) and Jimmy Garoppolo (8.2, behind only Deshaun Watson and Patrick Mahomes) over the same span. Brandon Aiyuk averaged 9.9 yards after the catch per reception during his career at Arizona State. That ranks best by any Power-5 WR since at least 2014. Deebo Samuel leads all WRs by the same stat since entering the NFL (9.8). And George Kittle leads all TEs since entering the NFL (7.9). Essentially, Lance is so well set up (playing alongside all of these YAC superstars) that he could average a 7.8 YPA on a 4.3 aDOT. Add in the rushing floor and he has legitimate league-winning upside.

Through four NFL seasons, Deshaun Watson has finished sixth (23.1), second (21.4), fifth (20.7), and first in FPG (24.1). Watson is certainly on the Konami Code spectrum, averaging 3.9, 5.6, 5.3, and 5.6 rushing FPG over those four seasons. Interestingly, he hit a career-high in FPG last year (and led the league in passing yards), despite a career-low rushing FPG average alongside a career-worst supporting cast.

Obviously, there’s no question Watson is one of the best fantasy QBs in the game. The much bigger question is “does he even play this year?” And, right now, that’s a question none of us have an answer to.

Russell Wilson hit a career-high in FPG last year (22.5), but in a banner year for QB scoring, he ranked just 8th overall, his seventh top-12 season in 9 years. Wilson isn't quite a Konami Code QB, but he's on the spectrum. He averaged 7.6 rushing FPG in 2014 and eclipsed 4.5 rushing FPG two other times. And last year averaged 4.0.

The bigger question with Wilson is whether or not HC Pete Carroll will “let him cook” (more so as a passer than a runner). Wilson has ranked top-5 in fantasy points per dropback in six of nine seasons, but outside of the top-20 QBs in dropbacks per game in six of nine seasons as well. Through his first eight games of the season, Wilson totaled 236.1 fantasy points (29.5 FPG) which is the second-most by any QB through his first 8 games of a season all-time. Uncoincidentally, over this span, Seattle ranked as the league’s most pass-heavy team over expectation (+9.2%). Throughout the remainder of the season, that dropped dramatically (+1.0%), as did Wilson’s FPG average (17.1 FPG).