With so many quality starting options at quarterback in fantasy, SuperFlex and 2-QB leagues are rightfully gaining popularity. In standard, 12-team redraft leagues where we have to play just one quarterback -- there are plenty of options available on the waiver wire every week. SuperFlex leagues not only help solve the scarcity problem at QB but it also adds another layer of strategy to your league.

Since we have to start two QBs in SuperFlex, it changes the way you have to draft considerably. In most 2-QB drafts, the 12th quarterback is usually off of the board by the 5th round. Because quarterbacks go way earlier, it pushes running backs and wide receivers way down the board and opens up potential pockets of massive values -- especially in a year like this where WR is incredibly deep.

SuperFlex leagues are a lot of fun but present a totally different challenge. How many QBs should you draft? Should you spend up or wait? Can you still go with a late-round QB strategy?

There are a few ways to attack 2-QB leagues. Let’s go through the advantages and disadvantages of each strategy:

Going with two top-10 QBs in the first four rounds has a few advantages. Let’s say you’re picking 10th overall and have a chance at taking Kyler Murray, Russell Wilson, Dak Prescott, and Deshaun Watson with your first and second picks. The pairing of Wilson-Prescott, for example, is absolutely going to give you one of the highest floors and ceilings at your 2 QB slots in the league. There is certainly something to be said for the safety of this strategy -- you’re basically locking in 30-35 points in every week -- and you don’t have to worry about the position for the rest of the draft. Going with any pairing of two top-8 studs in a SuperFlex league is sort of like spending up on Travis Kelce or George Kittle in standard redraft leagues. Sure, there is an obvious opportunity cost to the strategy (worse RB/WR depth) but you do secure a positional advantage over your opponents.

I took the lower-end variation of this strategy in the Scott Fish Bowl -- which is a massive tournament that is SuperFlex and uses TE premium scoring (1.5 PPR points). Christian McCaffrey was the no-brainer 1.01, but I then followed CMC with Austin Ekeler in the second, Matt Ryan in the third, and Josh Allen (an unreal value) in the fourth.

The late-round QB strategy will always work in standard 1-QB redraft leagues simply because there are so many great weekly options and QB scoring is replaceable, outside of the true elites like Lamar Jackson and Patrick Mahomes. However, because QBs get pushed up the board in SuperFlex -- all of your favorite targets from rounds 10-12 in normal redraft leagues move into the 4th-6th rounds in 2-QB leagues. Depending on the draft room, QB runs can get wild in the mid-rounds of SuperFlex leagues and you do not want to get caught at the end of one.

Predicting how your draft will go and knowing what sort of strategies your leaguemates might do is always tougher in 2-QB leagues but there are certainly pockets of QB value to be had in the mid-rounds. Even though you’ve missed out on all of the stud QBs, you just spent the first four rounds hammer RBs and WRs while the rest of your league likely each took at least one QB in this span. A mid-round pairing of Jared Goff-Jimmy Garoppolo isn’t sexy, but it’ll certainly be good enough if your first 4-5 picks all give you a leg up over your league at running back and wide receiver. If you do with a mid-round pairing, it’ll likely be good enough to not warrant taking a third QB as long as your QBs don’t have the same bye.

3. One stud in the first three rounds, then stream your QB2

This is my favorite strategy in SuperFlex leagues because you get the best of both worlds. And it’s the easiest to plan for. For example, if you’re picking third overall and don’t want to pay up at QB for Mahomes or Jackson, you’re much better off taking the top-3 running back in the first round, going RB/WR in the second, and getting your QB1 (likely Josh Allen/Matt Ryan/Carson Wentz) in the early third round. Ryan and Wentz have both finished as weekly top-12 (QB1) scorers in over 60% of their games over the last two years and offer underrated floors while Allen has averaged 20.2 fantasy points per game across his last 22 starts (including postseason). After you get your QB1, you can then wait and take two options in the later rounds and then mix and match your QB2 every week based on the matchup. Gardner Minshew and Teddy Bridgewater are the perfect late-round QB2 targets in SuperFlex.

This isn’t for the faint of heart, but in a year where there are 35 draftable options at the position (including Tua Tagovailoa and Justin Herbert you can go with a YOLO late-round strategy if you play your cards right. This strategy really only works if it’s a 10-team league or a league with a lot of starting spots (like 2 RB, 3 WR, 2 FLEX), but it can be an extremely effective contrarian strategy. While the rest of your league hammers QBs in the first 6-7 rounds, you load up at every other position and try to secure advantages at running back, wide receiver, and tight end.

I recently tried the YOLO strategy in a mock draft hosted by BallBlast and 4for4’s Kate Magdziuk. Picking 8th overall, I started my draft by taking 6 non-QBs (Mixon-Sanders-Robinson-Evans-McLaurin-Ertz) before securing my first QB (Ben Roethlisberger) in the 7th round. Frankly, even though I took my QB1 later than everyone else, I could have taken this strategy even further to the extreme and faded Big Ben in the seventh because my other 3 QBs are the true YOLO strategy in action: Jimmy Garoppolo (10th round), Dwayne Haskins (12th), Tyrod Taylor (18th). Now, this strategy can be extremely fragile and leave you with Nick Foles as your QB1 if you don’t play the board just right. But, QB and WR are both deeper than ever if you want to give yourself a different roster build and plenty of starting options. The only downside to the YOLO strategy is that you have to take at least 3 (maybe 4) QBs for it to work. You want options at QB if you fade the position for the first 6-8 rounds and if you play in a league with only 15-16 roster spots, being forced to carry four QBs may get a little tough to manage through the bye weeks.

Shallow leagues are probably the best format for the mid-round pair or YOLO strategies. Fewer teams = more depth at all positions and it makes the expensive early-round QB options a little bit less attractive because there are more options. With only 20 QBs starting each week, the difference in scoring between a pairing of Patrick Mahomes-Daniel Jones and a mid-round or YOLO pair is 5-10 fantasy points per game and can be made up by hammering RB/WR depth.

In 12-teamers, you should always try to get at least one stud in the first three rounds. I will never be a fan of drafting quarterbacks early in any league regardless of the starting roster spots or settings because of how deep the position is but it’d be pretty hard not to draft Mahomes or Jackson if they slip to 5th-7th overall after the first four elite RBs (McCaffrey, Elliott, Barkley, Kamara) are gone. Unless you can get a great value on one of the top-5 QBs, I’d target the back-end of the QB1 tier (Allen, Wentz, Ryan) aggressively and then either pinpoint one mid-round value (like Goff, Garoppolo, Tannehill) or take two late-rounders.

Deep SuperFlex leagues may be the only formats where it makes sense to take Mahomes or Jackson at 2nd or 3rd overall after McCaffrey is off of the board. Since 28 QBs are going to start every week across your league, the difference between having the No. 1 quarterback in fantasy points per game and the No. 15 QB in FPG as your QB1 is massive. For that reason, the YOLO QB strategy is not advisable in 14-teamers. 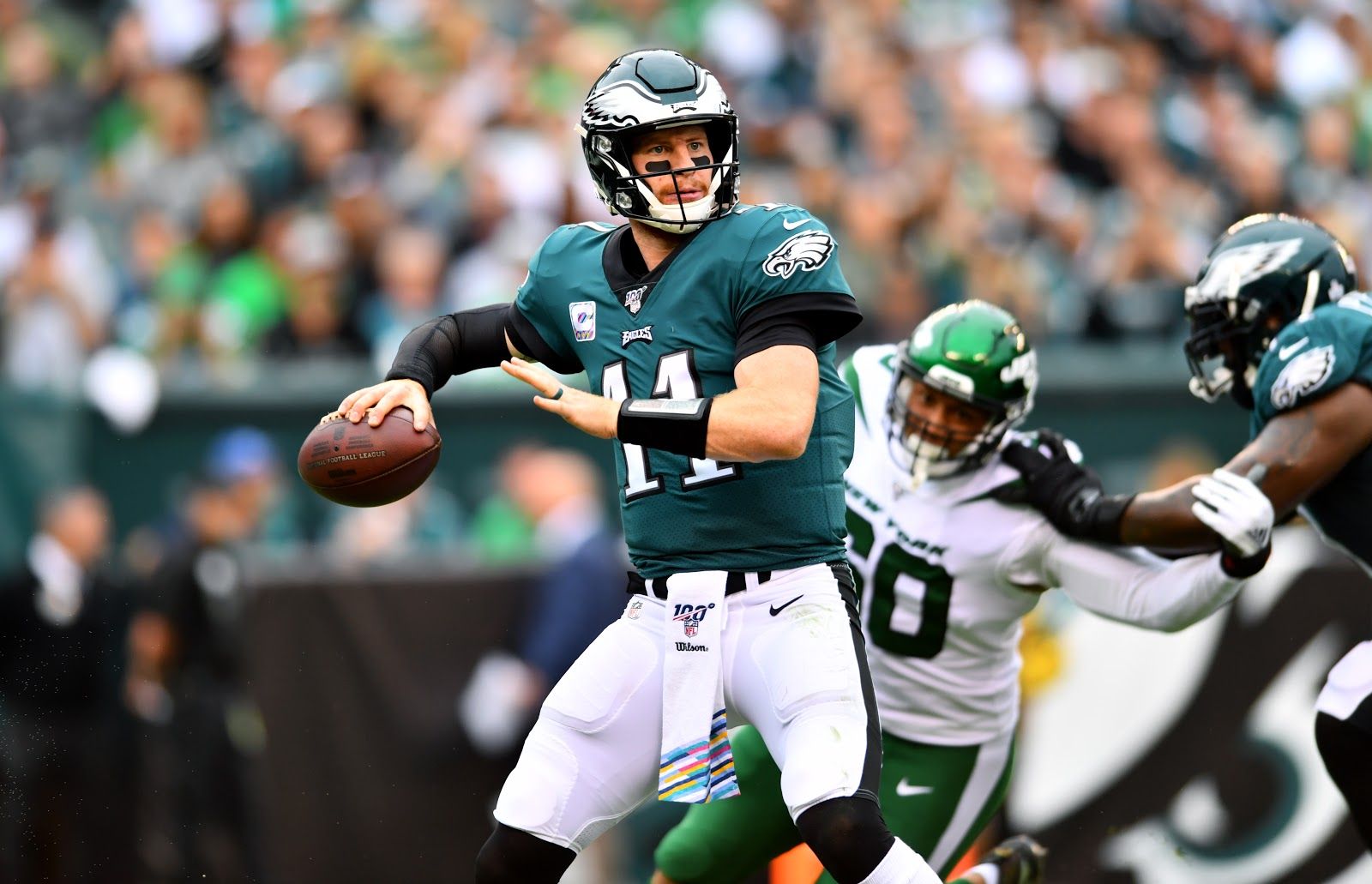 According to Scott’s adjusted strength of schedule metrics, a Wentz-Garopplo pairing makes a ton of sense. Wentz has the easiest slate of 2020 opponents according to SoS while Garoppolo’s schedule looks particularly nice when it matters most, too. Jimmy GQ has the 4th-easiest schedule in Week 1-4 and 2nd-easiest schedule in Week 14-16 during the fantasy playoffs. Meanwhile, adding an elite separator in Jalen Reagor and getting DeSean Jackson back healthy may be all Wentz needs to truly hit his ceiling. Over the last two combined years, only Mahomes (73%) and Jackson (73%) have finished as top-12 weekly finishers more often than Wentz (67%).

Allen has the worst schedule in the NFL according to both DFB’s adjusted SoS metrics and Warren Sharp’s schedule analysis, but I’d argue that it sort of doesn’t matter because the reason we’re drafting Allen has nothing to do with his passing efficiency. It’s all about rushing. Allen has added at least 4.5 fantasy points with his legs in 17 of his last 22 starts and has scored 8 or more points on the ground 12 times in this span. To perhaps somewhat off-set Allen’s bad schedule, I’d look to pair Allen with either Big Ben or Joe Burrow Roethlisberger has the third-easiest slate of 2020 opponents and as I outlined in my best-ball notebook, the Steelers are going to throw a ton if he’s healthy.

Burrow just looks like a massive value in general if you can get him anywhere close to his QB28 average draft position (according to Fantasy Football Calculator). I’d bet Burrow’s true ADP in sharper leagues is closer to QB20, but he’s still an excellent value regardless. Cincinnati faces the 7th-easiest slate of 2020 opponents, they should have to throw a ton because their defense stinks, and Burrow has sneaky rushing upside. Burrow has excellent pocket awareness and it’s a big part of the reason he scrambled for 20 or more yards in 10-of-15 starts last year.