Hello, and welcome to the Week 3 Expected Fantasy Points (XFP) Report. If you’re unfamiliar with XFP, I’ll get to that in a little bit.

But basically, every week we’re going to be telling you which players are seeing the best volume for fantasy, as measured by XFP. (You can find that on the site here, along with a number of other awesome stats like air yards, end zone targets, etc.). Each week, we’ll be telling you who the best buy-low and sell-high candidates are, as measured by Points Above Replacement (PAR), or the differential between actual- and expected fantasy points. This is an especially effective approach in DFS, where players are typically priced by production rather than volume, though PAR will regress to the mean. And we’re also going to be telling you who the best volume-per-dollar DFS plays are.

Expected touchdowns (XTD), same thing. RBs score from the one-yard line on 54% of their attempts. RBs score from the 17-yard line only 3.6% of the time. So why ever use “red zone carries,” which treats both carries the same, as a fantasy stat? I have no idea. Why doesn’t everyone point to XFP in their fantasy research? I have no idea. Once you have XFP and XTD you can contrast that with a player’s actual fantasy points or actual touchdown total to tell you how efficient a player has been (PAR). This is especially useful in highlighting regression candidates, buy-low targets, and mispriced players for DFS.

Through two weeks of action, here are the top-25 players in expected fantasy points (XFP) per game: 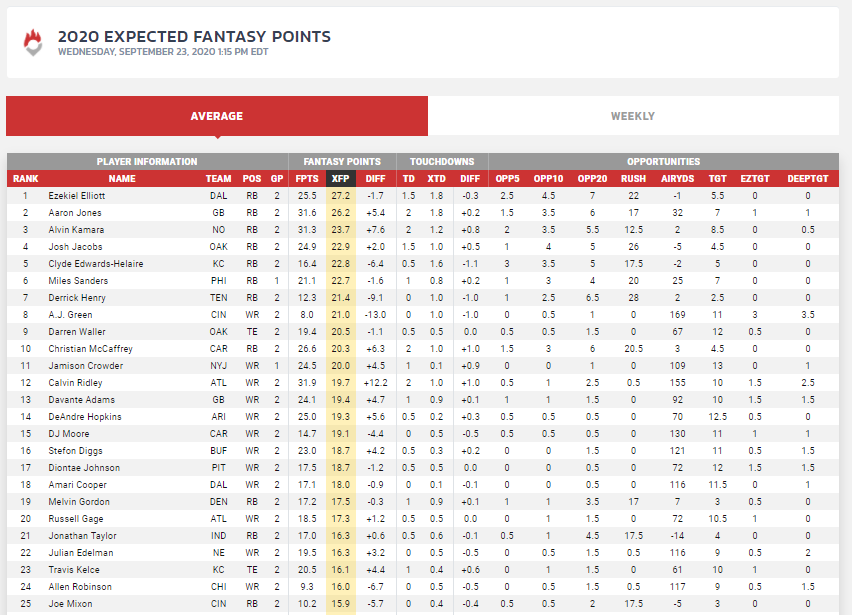 Green is looking like one of the most obvious buy-low candidates of all time. His production has been poor, but his volume has been excellent – actually the best at the position. Through two weeks, he ranks fourth in targets (22), first in air yards (338), first in end zone targets (6), first in deep targets (7), first in XTD per game (1.0), and first in XFP per game (21.0). And yet, he ranks dead-last in PAR per game (-13.0).

What’s causing this? At age 32, following multiple injuries, is Green simply past his prime? Maybe. I think it's more likely that he’s just rusty. We can count on one hand the number of times he’s put in a full practice in pads since Zac Taylor took over as head coach. QB rapport is something that needs to develop over time. The only question is, do we buy-low now or wait until after this week’s tough matchup against Darius Slay?

Another terrific buy-low candidate is Henry, who ranks 7th in XFP per game (21.4) but only 28th in fantasy points per game (12.3). He leads all RBs in carries by 12 (56) and ranks 4th in snaps (105). He totals 2 expected touchdowns, but has yet to find the end zone. He ranks last among all RBs in PAR per game (-9.1), after posting an all-time great positive differential last season. But like with Green, is this the week he goes off? Or do we wait another week?

Tennessee is favored, but only by 1.5 points. Henry has long been one of the most game script-sensitive RBs in fantasy football, averaging +9.6 more FPG in wins than losses since the start of the 2018 season. He’s seeing a lot of snaps, but still isn’t seeing much work in the passing game. And Darrynton Evans could come back this week to carve out a role as the team’s scatback, relegating Henry back to the bench when trailing or in obvious passing situations.

The issue is, his 9.0 targets per game (from Mitchell Trubisky) are probably worth a bit less than Julio Jones’ 8.5 targets per game from Matt Ryan. Should we buy low now, waiting for the inevitable Trubisky benching? I’m bearish. Trubisky has long been one of the league’s least-accurate QBs, but we can say the same thing for Nick Foles. Even so, this week’s matchup is near-ideal, as Wes Huber outlined here, so he’s someone you’ll want exposure to in DFS this week.

Edwards-Helaire ranks 2nd-worst in PAR per game, but that’s due entirely to the fact that he failed to score on 6 opportunities inside the 5-yard-line in Week 1. His goal-line efficiency will regress to the mean, but the main takeaway should be the good volume he’s seen thus far. He ranks top-12 in Snap% (65%), Rush% (76%), Target% (12.7%), carries per game (17.5), and targets per game (5.0). Among all RBs he ranks 4th in XFP per game (22.8). On the league’s most potent offense, I promise you that’s going to carry over into fantasy production in a big way.

Mixon, like Henry, is another game script-dependent buy-low candidate. He’ll see better days ahead, but just know what you’re getting – a RB who will be far more productive in wins than losses. And on this Bengals team, with their dreadful defense, there’s probably going to be a lot more of the latter than the former. In the 2nd-half of games this year, Mixon outsnaps scatback Giovani Bernard only 41 to 35. Even so, he ranks 11th among all RBs in XFP per game (15.9).

Thomas might not be an elite talent. Maybe he’s not even an above-average talent. And it’s hard to think his QB is doing him any favors, but he is seeing terrific usage. He ranks 2nd among all TEs in Route% (91%), 2nd in targets (8.5), and 3rd in XFP per game (15.7). That said, he totals just 63 yards on 17 targets, and his lone score came on a busted coverage in Week 1. Although he flopped last week in a dream matchup (against Arizona), this week’s matchup might be even better – Cleveland has given up a league-high 50.8 fantasy points to TEs through two weeks. 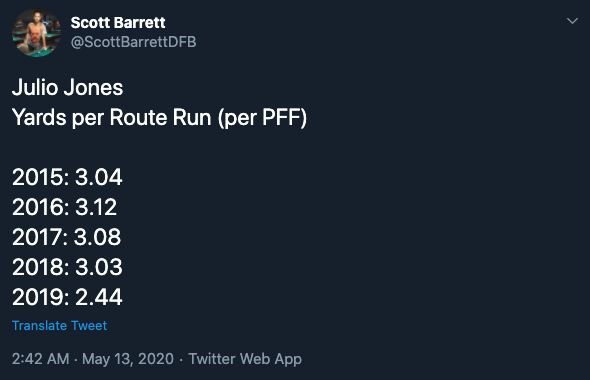 Of course, that’s also what everyone else already thinks. Gage was hyped up all offseason by Greg Cosell on our livestreams, and then couldn’t stop gushing about “smooth as silk” Ridley last week. And yet, no one this past offseason talked about Jones’ YPRR decline last year (see above). Or how Ridley actually totaled more fantasy points than Jones prior to his season-ending injury.

While I do think Jones will re-establish himself as the alpha, don’t be surprised if Ridley isn’t too far behind. QB Matt Ryan might already trust him more around the end zone – Ridley leads all receivers in XTD (2.1). And, with Atlanta’s defense providing zero favors, don’t be surprised to see Ryan again lead the league in completions, and for all three of Atlanta’s receivers to remain fantasy-relevant.

“Given Metcalf’s overall traits profile, is it unreasonable to ask whether he can develop into a Julio Jones kind of receiver with more experience and more fully dimensional utilization?” -- Greg Cosell (June 2020)

Metcalf is due for a massive regression (+16.8), but at the same time, is that really where our focus should lie? And not that he looks like a total stud--tagging Stephon Gilmore for 85 yards and a score in Week 2--while Seattle leans more pass-heavy than we ever thought possible? And, like with what we were saying about Allen Robinson, Metcalf’s 104.0 air yards per game (17th-most) from Russell Wilson is probably a great deal more valuable than Robinson’s 117.0 air yards per game (8th-most) from Trubisky. A Seattle WR has accounted for 3 of the top-10 fantasy points per target seasons since 2015, while no other team ranks in the top-10 more than once.

Similarly, McLaurin looks like a regression candidate, but maybe the top takeaway is that he still looks freaking awesome. On middling volume (17 targets) in brutal matchups (Darius Slay and then Patrick Peterson), he’s totaled 12 catches for 186 yards and a score. Unfortunately, that tough cornerback draw continues for a few more weeks, getting the Browns, the Ravens, and the Rams in his next three games.

Following Week 2 injuries to Christian McCaffrey and Saquon Barkley, Elliott is looking far and away the most valuable player in fantasy. He’s seeing absurd usage, leading all players in XFP per game (27.2) while also leading all running backs in snap% (90%). On this potent Dallas Cowboys offense, he has to be the favorite to lead the league in touchdowns. And that’s a big takeaway here, look for even bigger days ahead – Prescott isn’t going to score three rushing touchdowns often.

One of our most-hyped players of the offseason, is seeing exactly the sort of volume we dreamed for him. Through two games, he ranks 6th in XFP (18.7 per game), 1st in targets (24), and 2nd in end zone targets (3). Compare that to JuJu Smith-Schuster – 10.8 XFP per game, 14 targets, and 2 end zone targets. I wouldn’t be shocked to see this continue, and for Johnson to finish with more fantasy points by the end of the season. But, of course I wouldn’t. 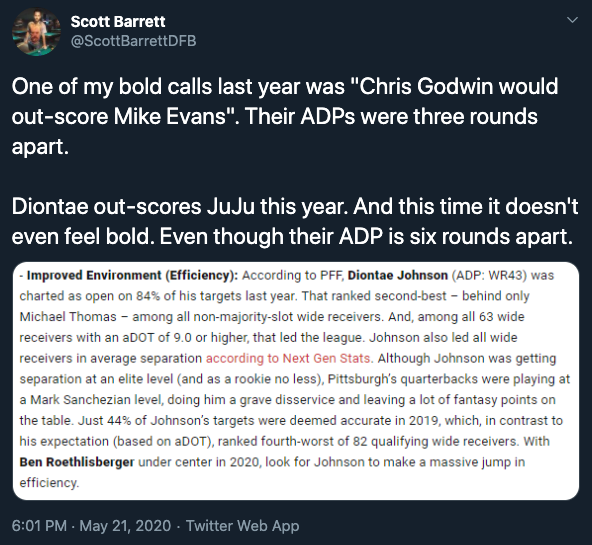 Although maybe still not at 100%, Sanders saw terrific usage in his Week 2 debut, totaling 20 carries and 7 targets, worth 22.7 XFP (4th-most among RBs on the week). Without Barkley for the remainder of the season, and without McCaffrey for at least a large chunk, Sanders is looking like a potential league-winning bell cow. What does that mean? Like Elliott, and unlike Henry and Mixon (and Nick Chubb), he shouldn’t ever be too game script-sensitive. When leading, Philadelphia will lean heavily on Sanders via the run. When trailing, Philadelphia will lean heavily on Sanders through the air. Remember, in PPR leagues, targets are worth 2.73 times as much as a carry.

- RB Antonio Gibson saw his Snap% jump to 65% in Week 2. He handled 13 of 20 carries and all 20 of the team’s routes out of the backfield (2 targets). Through two games, he’s forced 9 missed tackles on 25 touches, while all other Washington RBs have forced just 4 on 30 touches. Look for Gibson to see even more work moving forward, and especially as pass-catcher. He’s seen 4 targets thus far, but played WR at Memphis last season.

- In Week 2, Austin Ekeler out-snapped RB Joshua Kelley just 44 to 41. Kelley saw more carries (23 to 16), more opportunities inside the 10-yard-line (2 to 0), and was only barely out-targeted by Ekeler (4 to 3). It's early, and Justin Jackson was hurt, but this sort of good usage is comparable to how Los Angeles split work between Melvin Gordon and Ekeler late last year.

- In just the 4th quarter, after Christian McCaffrey suffered a high-ankle sprain, RB Mike Davis played 100% of the snaps, catching 7 of 7 targets for 70 yards.

- With Drew Lock out 3-5 weeks, QB Jeff Driskel is the likely starter for the immediate future (though Blake Bortles also could win the job). He averages – this can’t be right… *double-checks work* – 20.3 FPG over the past two seasons (4 games), averaging 39.0 rushing yards per game over this span. He’ll be a hot commodity in DFS this week. 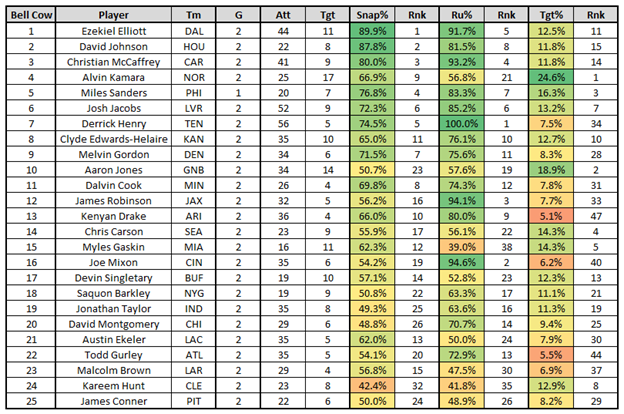