If you haven’t read my Running Back or Wide Receiver version of this article, it might be best to start there.

For rankings and projections, I left it to the professionals here at Fantasy Points. My work merely complements theirs. I also understand fantasy players want some guidance on the chance of injury and volatility of physical health. Enter this pseudo-scientific attempt at quantifying players’ injury risk. Ultimately, the goal is to compile master “volatility” tiers. For now, the focus is on the top 30 veteran tight ends going into 2020.

The methodology to score the injury risk of tight ends is identical to calculations for wide receivers. As mentioned, injury “prediction” is a fool’s errand, especially in football, as just 2.3% of games are injury-free. However, there are basic orthopedic principles and medical statistics that help to estimate the physical health and performance volatility in NFL wide receivers:

A player’s volatility can be thought of in two branches: athleticism and injury risk. The first branch is best reflected by age since there’s a decline in athleticism every year after a certain point. To reflect the aging process, each player was assigned 0.25 points for every year they were over the age of 26 (26 is the average age of top fantasy tight ends). Additionally, every player received a score of 1 for the three most common injuries of the position (ankle/hamstring/concussion) so the baseline score of every player is 3. To further quantify each players’ risk, recurrence data from the medical research on NFL players was utilized if available (recurrence is defined as the percentage of receivers who sustain an injury more than once in a career). If a recurrence rate wasn’t available in the medical literature, it was calculated manually using the injury reports from 2016-2019. For example, ACL recurrence is 18% and is represented by 0.18 in the volatility score, an ankle sprain recurs at 10% and is represented by 0.10 in the score, etc. If a player had a history of a hamstring injury they were assigned 0.34 to represent the 34% recurrence rate. Similarly, players were assigned 0.20 if the hamstring injury was within the last calendar year. To represent the fact that every injury is not created equally, the “clinical judgment” section was used to adjust for any discrepancy that might not truly represent a player’s volatility. This is similar to the idea of raw projections vs. rankings, but is the most subjective portion of the process.

To make the process more clear, consider Rob Gronkowski as an example:

The final score represents each player’s physical volatility score due to previous injury and overall athleticism. Although not perfect, last year players with a high score are Evan Engram and Eric Ebron. Players with a low score in 2019 are Dallas Goedert, Gerald Everett, and Darren Waller, among several others. There were many more players in the “Green Light” tier who did finish 2019 with minimal injury issues, which represents the fact that the previous injury is the most important factor to reasonably project a player’s future health and availability. Tight ends differ from running backs in that they are injured more frequently, so overall volatility is naturally higher. It’s important to understand that even though pass catchers are injured more often, it doesn’t mean they necessarily miss games more frequently.

There are obviously several weaknesses to this methodology; but if nothing else, it walks users through how I think of players relative to each other and why. The tiers are split into the traditional “green light,” “yellow light,” and “red light” analogy with a description for each tier. Lastly, keep in mind that the lower a player is in a tier, the more physically volatile he is. For example, even though they’re both in the Green Light Tier, Hunter Henry is more volatile than Ian Thomas. 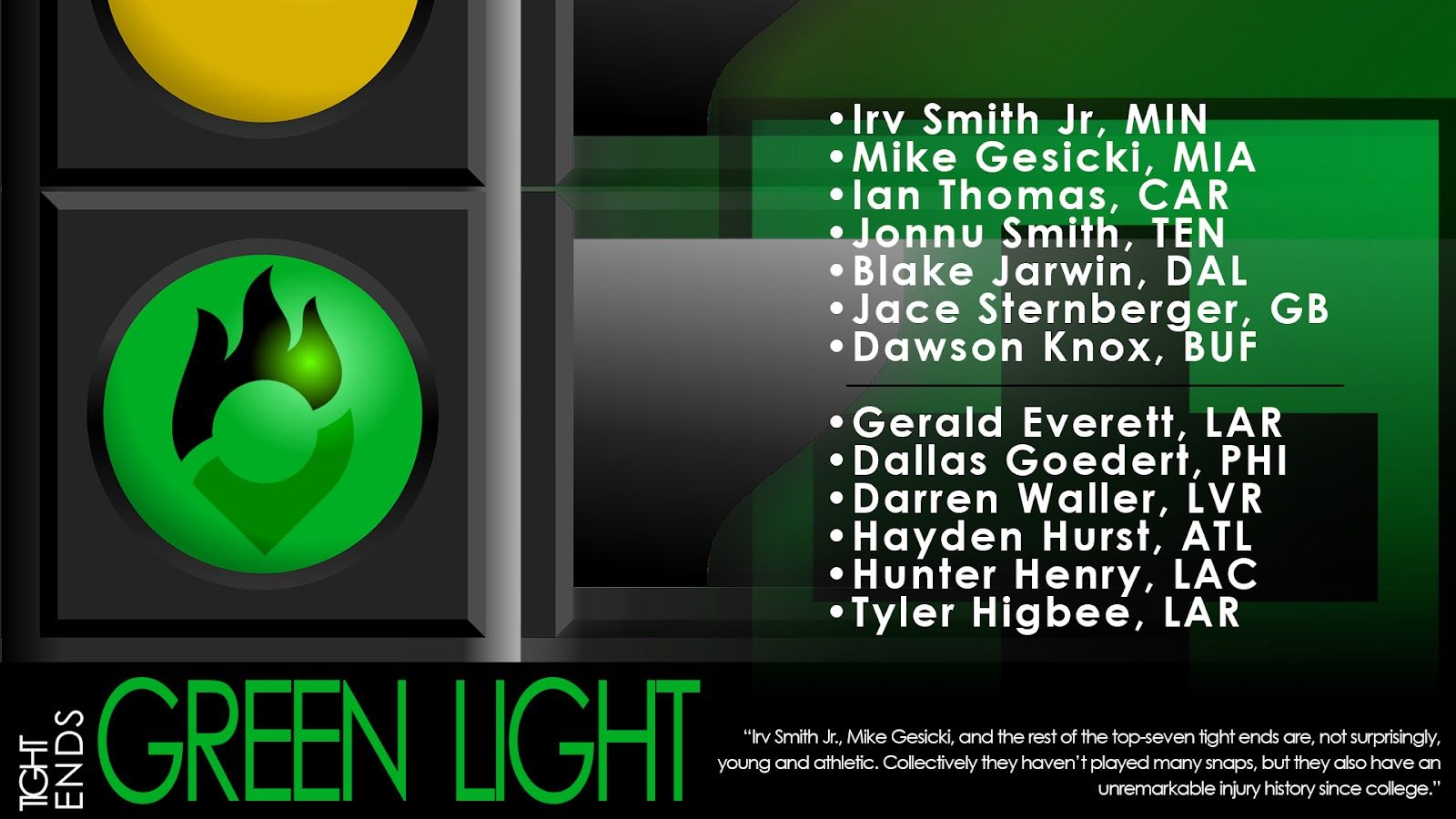 Irv Smith Jr., Mike Gesicki, and the rest of the top-seven tight ends are, not surprisingly, young and athletic. Collectively they haven’t played many snaps, but they also have an unremarkable injury history since college. Although non-contact injuries and concussions are a risk, they’re volatility kings headed into 2020.

The green light tier break begins with Gerald Everett who recently had a wrist injury and a knee injury that lingered. A bounce-back candidate in this crew is Hayden Hurst who, in 2019, was only a year removed from a stress fracture in his foot. These foot and ankle injuries are notorious for holding players back athletically. At the end of the green light tier you’ll find Hunter Henry, who has had a history of knee injuries (an ACL tear and a tibial plateau fracture). These are relevant injuries because they increase the risk of osteoarthritis seeing as they damage the inside of the joint. Still, Henry is a solid option at tight end in 2020 with minimal physical concerns. 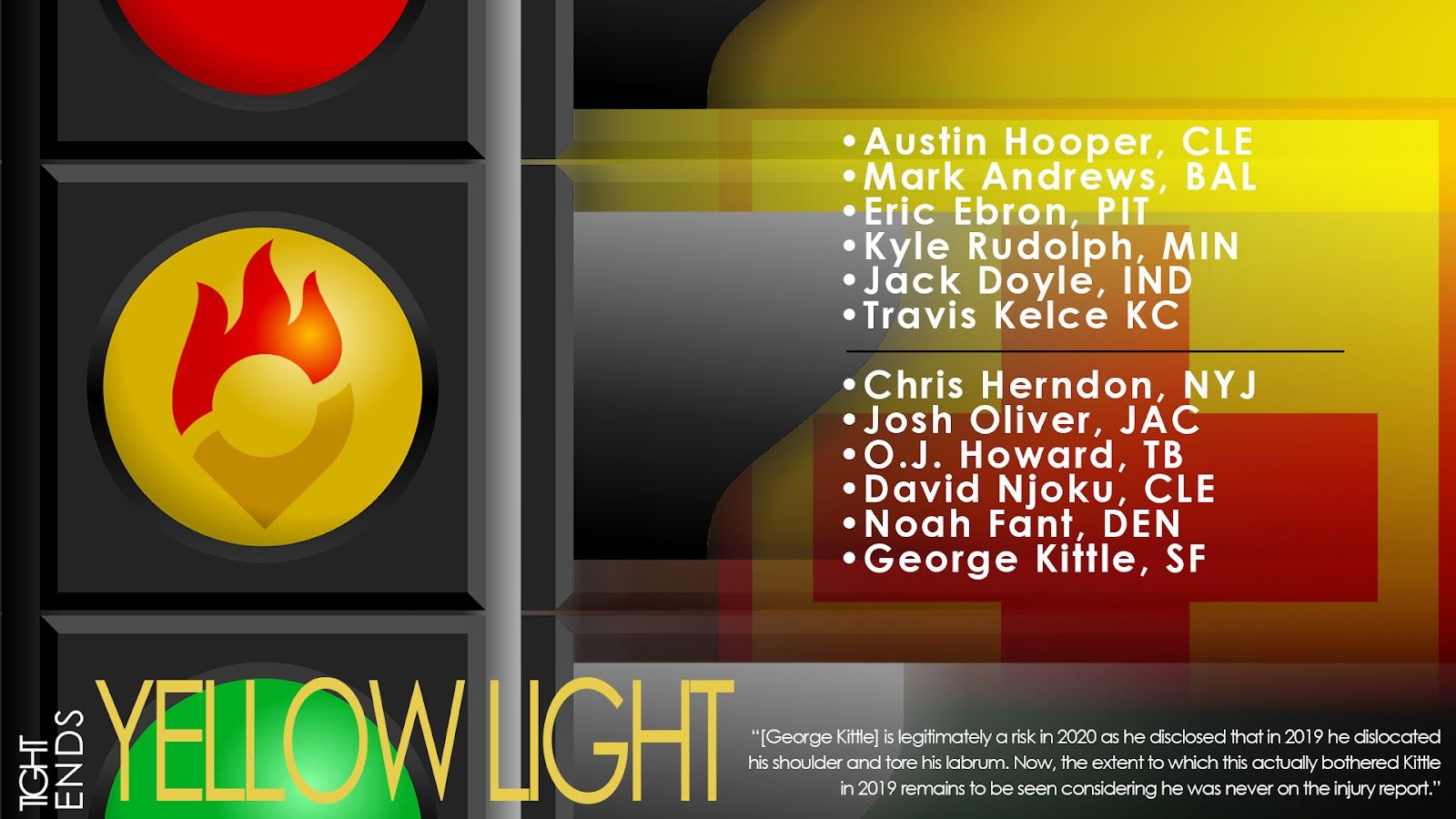 This is where the volatility truly begins at the tight end position. For example, Mark Andrews has a history of foot issues, which can become problematic for a man who is six feet and 5 inches tall and 260 pounds. Next up is Travis Kelce who has a history of concussions, is 30 years old, and has had surgical procedures of his knee, shoulder, and ankle. Not to mention Austin Hooper who has a history of significant MCL sprains. Additionally. Eric Ebron is coming off of a major ankle surgery after suffering from several sprains over the last several years. Will the surgery help?

The yellow light tier break occurs with Chris Herndon, who was placed on the IR in 2019 due to a significant hamstring injury. Not only is re-injury a possibility, but it’s fair to question Herndon’s own commitment to his body as he violated the league’s substance abuse policy back in 2018. This is not an indictment on Chris Herndon and his character-- it’s simply a question to ponder. Next up is George Kittle, who is legitimately a risk in 2020 as he disclosed that in 2019 he dislocated his shoulder and tore his labrum. Now, the extent to which this actually bothered Kittle in 2019 remains to be seen considering he was never on the injury report. Nevertheless, taking Kittle at his word that the shoulder is at risk for dislocation, the numbers are the same for Dalvin Cook (42%-55% chance re-dislocation without surgery). It’s also notable that Kittle allegedly played through an ankle fracture in 2019. The only reason he remains out of the Red Light tier is because 1) it’s well documented that Kittle is quite literally insane and plays through pain/discomfort, and 2) he’s so athletic that as long as a shoulder re-injury doesn’t lead to the nine-month-long recovery, he’s shown he can play through pain and still be productive.

For the record, this type of behavior, although admirable, should not be applauded. 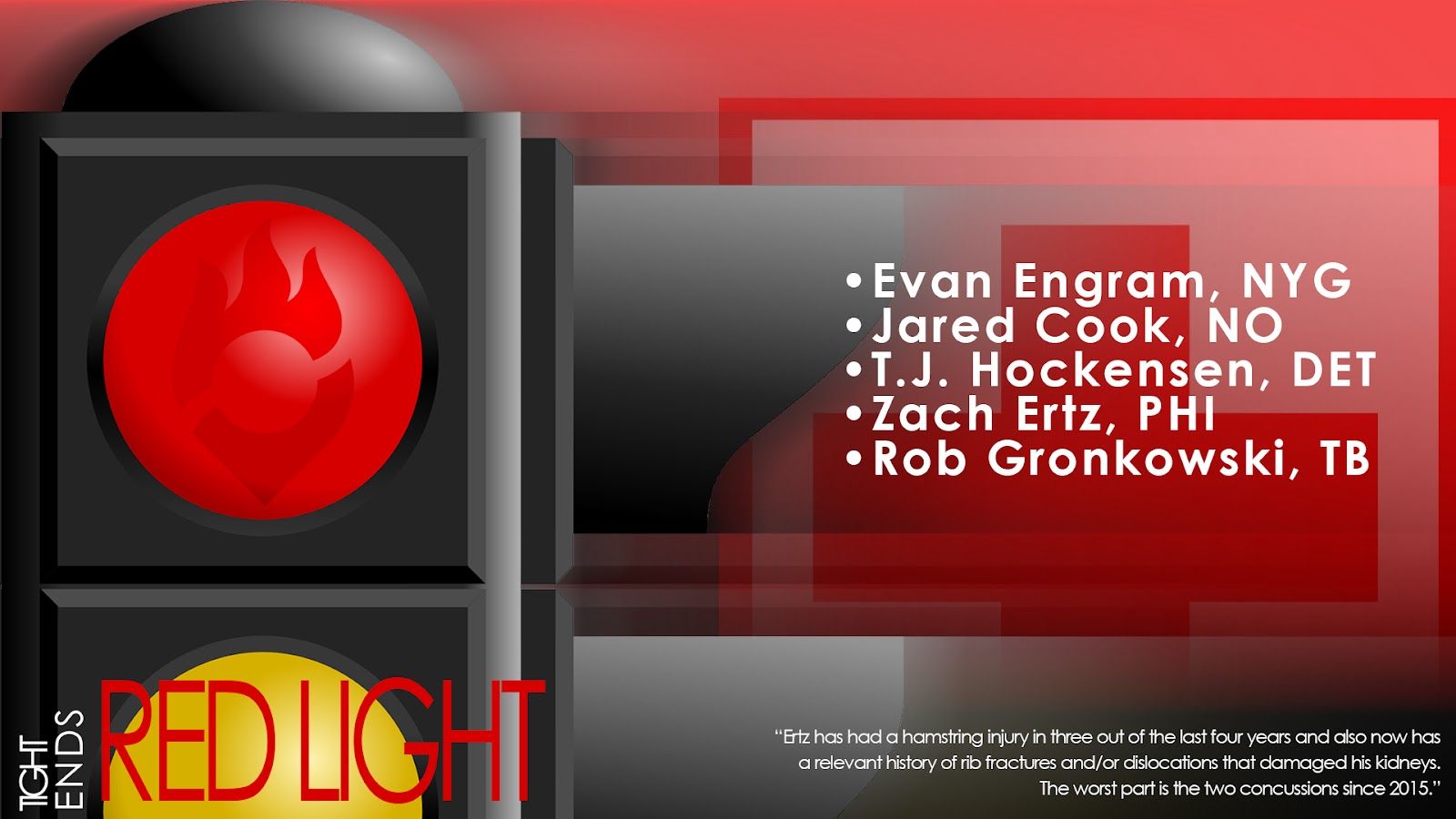 This tier literally speaks for itself as three of the five players who reside here already have an injury profile of their own. Read about Gronk, T.J. Hockensen, and Evan Engram here, here, and here.

As for Jared Cook and Zach Ertz, they have their own set of problems, as Cook is already 33 years old and an anomaly in terms of physical athleticism. Throw in a concussion history and his volatility is as high as it has been in years. Ertz has had a hamstring injury in three out of the last four years and also now has a relevant history of rib fractures and/or dislocations that damaged his kidneys. The worst part is the two concussions since 2015. Ertz is extremely productive, but it’s hard to deny the injury mileage he’s racked up. This Red Light tier is teeming with potential -- but be aware of their respective situations.

As was the case for receivers and backs, the Green Light Tier is full of young players with minimal concerns and a non-remarkable history of injuries. The Yellow Light Tier is full of players with a significant history of injuries that could knock them out of games in 2020, but they still have the potential to show off some durability. Lastly, the Red Light Tier has five players who, because of age or significant injuries, are the classic prototypes of boom-or-bust for the 2020 season.