There’s 7:43 left in Super Bowl LIII. The score is deadlocked at 3, and the Patriots are on the move against the Rams defense. On 2nd-and-3, Tom Brady tosses the ball 33 yards downfield perfectly, splitting the two defenders covering Rob Gronkowski, who makes the catch diving to the ground. The next play, Sony Michel runs untouched into the endzone for the only touchdown of the game, proving to be the decisive score in a generally boring Super Bowl. The Patriots win their sixth Super Bowl ring, which was Gronkowski’s third.

Several hours (and probably many beers) later, Gronkowski is in agony and unable to sleep.

“I’m at the after party … I sit down and I’m just chillin’ the rest of the night until 3:00 AM,” Gronkowski would later say in an interview with Sports Illustrated. “I tried to go to bed. I slept for five minutes that night. I couldn’t even think. I was in tears in my bed after a Super Bowl victory. It didn’t make that much sense to me.”

To put it simply, Gronkowski had an extremely painful quad contusion. For reference, you and I get bruises — NFL players get contusions. Contusions are bruises that extend through fat, muscle, and, at times, reach the bone itself. The crazy part about this contusion story is that it’s a blip on the radar compared to his extensive injury history. Now that Gronkowski officially announced his return to the NFL, that blip becomes magnified. But what does it mean for his health?

Whether or not the time Gronk took off from football will reduce his injury risk is complex due to factors such as tissue healing times, his acute:chronic workload ratio and the chronic issues he now likely faces. First, it’s important to note that time really can heal all wounds. Basic biology dictates that any semi-healthy human tissue, if treated with rehab and general exercise, will heal within 12-18 months. So the contusions, muscle strains, and general aches and pains from playing football every week are not currently a factor. There’s no long-term remedy for his specific wear and tear — only temporary pain relief.

Make no mistake, his return to the NFL coinciding with the new CBA that has loosened restrictions on cannabis use and testing is likely not lost on Gronk. Next, his workload ratio over the last four weeks and over the previous one week is taken and calculated with a fancy formula. If that ratio is greater than 1.5, his risk of muscular strains and non-contact injuries spikes. This concept can theoretically be spread out over much longer and can also affect him through training camp. Conversely, if Gronk has developed even mild joint pain and stiffness associated with osteoarthritis (OA … more on that in a bit), that’s only going to progress as the season moves forward. Even so, there’s much to be said about the mental and the psychological aspect of playing a professional sport. The piece that should not go overlooked is how he may have used the time off to grow in that respect. In fact, research shows that long standing pain and poor mental health go hand in hand. If Gronk found coping strategies and is a better mental state moving forward, I don’t give a damn how many catches he has in 2020. I’m simply happy for the man.

The sheer number of Gronk’s surgeries — not just injuries — is startling. This is due to the recurrence risk and increased likelihood of early onset osteoarthritis (OA) for each affected joint. Now, arthritis is overused in the everyday vernacular between medical professionals and patients. The language can scare patients who are unaware OA frequently affects people who don’t ever feel symptoms. However, given Gronk’s specific medical history, it would be intellectually dishonest to ignore his risk: 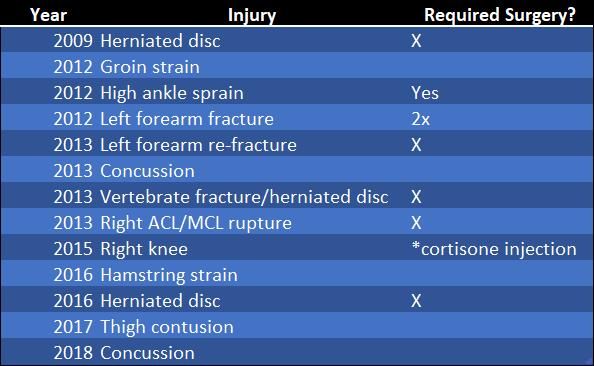 None of these injuries are good, but a few are more noteworthy such as his two documented (emphasis on the word documented) concussions as recently as January of 2018. After all, no time in the world restores brain damage. The next place this article can go is the 2015 pain injection to the same knee affected by an ACL tear. In fact, aside from the back (we’ll get to that) his right knee is the body region most at risk for OA. All things considered, the primary concern should be Rob Gronkowski’s recurrent disc herniations and the risk for OA.

From 2012-2018, Gronk missed 14 games due to recurrent disc herniations. In 2016, he was placed on Injured Reserve for the final 11 games of the season for this exact reason. As recently as 2018, he missed three games due to his back flaring up.

Below is a chart of Gronk’s final three seasons as a Patriot in which he missed almost 50% of games due to injuries in general: 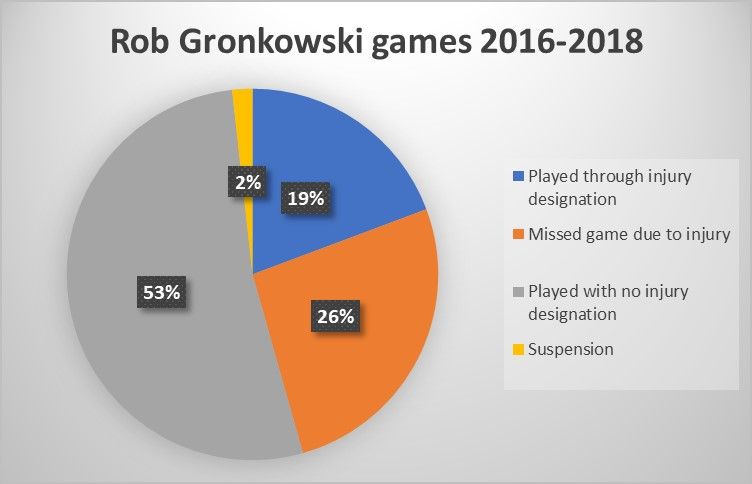 The original back injury and surgery occurred while he was in college after herniating a disc in his low back. Herniated discs are also highly correlated with “degenerative disc disease” which is a scary way to say “aging on the inside.” Discs sit in between each vertebra all the way down the spine,and are thick to provide stability and cushion to the bony joints of the spine. When damaged, they “bulge” and place pressure on adjacent nerve roots. If severe, this can cause significant pain, numbness and tingling down the leg/foot, complete loss of sensation, and prevent movement of the legs. This is because the nerves that control these functions have been effectively “knocked off line’” at the source. Imagine water flowing through a hose; now, imagine a kink in the same hose. The water stops flowing due to the pressure. This is a non-perfect way to describe how disc injuries can affect the body. To relieve this pressure, Gronk has now had three surgeries in which the surgeon makes an incision into his back and “cleans up” the protruding disc. It’s as pleasant as it sounds. And once a person has a disc herniation, he or she is much more likely to have another … and another, as is the case for Gronk. To pile it on even more, low back muscle spasms are much more likely with these kinds of injuries and surgeries as well.

Conversely, disc herniations and “degenerative disc disease” are common conditions in people with no symptoms at all. In fact, this study of 3,110 37% of people the age of 20 were asymptomatic but showed evidence of “disc degeneration.” This next study also found that 85% of individuals with a disc herniation and symptoms resolve in 8-12 weeks. All in all, it’s a fairly non-severe condition most of the time, for the large majority of people who do not play a violent sport at the professional level. Even then, this study on 137 NFL players found “excellent” performance-based outcomes following surgery to repair lumbar injuries that Gronk has had. They also found no negative effects on career longevity. The flip side? The two primary predictors of success in elite athletes according to this study are:

The second factor for success is obviously not in Gronkowski’s favor as he’s had several back surgeries affecting multiple levels of his back. Even the motivational factor is a volatile one as Gronk has shown that the physical pain can and does outweigh the passion to play. Unfortunately given his history, he’s one big hit away from being reminded of why he retired in the first place. Science tells us that he will need to find a way to keep on keepin’ on during the grueling NFL season.

That last point leads perfectly into the next idea to consider: workload management. Could Gronk play an entire season? Absolutely. However, it’s likely this world exists on a limited snap count, reduced workload and minimal work between the 20 yard lines. Ultimately, the medical staff will play a big role in his workload management. This possibility cannot be ignored.

Gronk’s extensive list of injuries and surgeries put him in the high risk category to re-injure all of those same body parts and/or develop OA after suffering a big hit. Furthermore, if he can avoid another debilitating disc herniation and finish an NFL season, it will likely come at the expense of the production we’ve grown accustomed to seeing out of him. In the end, when removing the name-brand that Gronk inherently brings, fantasy players are left staring at a medically complex tight end who, over the last five seasons not including 2017, has seen a stepwise decrease in fantasy production.

Nevertheless, hope can be drawn from the fact that Gronk is a once-in-a-generation athletic specimen the size of a polar bear whose primary talent outside of party rockin’ is catching a football from Tom Brady.

In that same interview Gronk to Sports Illustrated in August of 2019, another line jumped out.

Anyone who has struggled with mental health or is close to somebody who has knows how powerful that statement is. A negative mental state encapsulates a person’s entire state of existence and desecrates experiences that should be joyful. Experiences like catching a dime from the greatest quarterback to ever play and effectively lock up a third Super Bowl ring.

So above all else, Gronk is a human with living breathing emotion and if he brought himself back from the depths he describes, then any touchdown he catches in 2020 is a bonus.

If you or someone you know is struggling with mental health, please go here.