There's definitely some scoring upside in this game between these two top-10 offenses in pace, but we’re in a bit of a holding pattern with so many key players possibly returning from injury. As Joe points out below, the Bears offense has more scoring upside with Andy Dalton under center and him getting another start here will help the shootout appeal. Barring a surprise, the Cardinals will have Kyler Murray and DeAndre Hopkins back here and this is a spot for them to get back rolling as the Bears allowed 38 (vs. Buccaneers), 33 (vs. 49ers), and 29 (vs. Steelers) in their three previous games before facing Tyler Huntley and Jared Goff in their last two.

Overall, this is the third-fastest game in adjusted combined pace and I’d be more confident in this game lighting up the scoreboard if Dalton does indeed start, but this is still not a good spot for the Bears offensively. The Cardinals have held their opponents to 20 or fewer points in 8-of-11 games with the only three teams able to break out being the Vikings (33 points in Week 2), Packers (24 points in Week 8), and Panthers (34 points in Week 10).

It sounds as though both Kyler Murray and DeAndre Hopkins will suit up in Week 13. The two have taken quite the hiatus from action, last taking the field on October 28th. For a team with playoff aspirations, Murray and Hopkins should feel very fortunate that they still sit atop the NFC South despite missing the month of November with soft tissue strains. At the very least, the presence of Nuk will improve the matchups for his receiver teammates. As a left perimeter devotee, Hopkins will see coverage from Jaylon Johnson — the best the Bears have on the outside — on virtually every one of his routes. With normal nickelback Duke Shelley placed on IR, 2019 sixth-rounder Xavier Crawford stepped into his shoes last week. He may have had a solid game against the Lions, but he’s going to have his hands full with Christian Kirk this week.

The expectation from the Cardinals is that Kyler Murray (ankle) and DeAndre Hopkins (hamstring) will play this week for the first time since Week 8 — the Cardinals managed to go 2-1 with Colt McCoy at QB and then had their bye week, which is why Kliff Kingsbury clearly has his agent angling for a new deal from the Cardinals.

The ink had barely dried on Lincoln Riley’s contract at USC when Kingsbury’s name was floated as a potential replacement at Oklahoma.

Oklahoma has targeted Cardinals’ HC Kliff Kingsbury as one of the potential replacements for Lincoln Riley, league sources tell ESPN.

Kingsbury has one year remaining on his contract after this season.

You think that last little detail got in there by accident? I’d expect a Kliff extension in Arizona soon. Anyway, Kliff is calling both Murray and Hopkins game-time decisions, but at least this is an early-slate game.

Kliff Kingsbury said both QB Kyler Murray and WR DeAndre Hopkins will be game-time decisions against the Bears.

Those with Murray and/or Hopkins will likely have no choice but to start them this week, and the other pass-catcher I actually feel best about with the Cardinals is TE Zach Ertz, especially given the state of the TE position overall. Since arriving in Arizona in Week 7, Ertz is tied with Mark Andrews as the overall TE3, behind only Travis Kelce and Pat Freiermuth.

Our Scott Barrett things this is a matchup for both teams to showcase their run games with James Conner and David Montgomery, and I’d agree. From the XFP Report:

“The raw volume, and certainly the production, has been somewhat lacking. But David Montgomery is no doubt a high end bell cow. He’s played on at least 80% of his team’s snaps in 5 of his last 5 healthy games, handling 86% of the backfield XFP over this span. For perspective, only Najee Harris has a snap share over 80%, and he’s also the only RB with a backfield XFP% over 80%. Still, he ranks just 27th in XFP/G (12.3) and only 28th in FPG (12.6).

Conner will remain a bell cow this week — Chase Edmonds (ankle) won’t be back until Week 14.

And because of that, Scott thinks it’s a great spot for Conner again. Here he is from Start/Sit:

This week’s matchup looks somewhere between neutral and above-average. The Cardinals are favored by 8.0-points, and Chicago ranks 10th-worst in YPC allowed (4.43) and 11th-worst in rushing FPG allowed (14.1) to opposing RBs. Chicago also ranks top-7 in schedule-adjusted FPG allowed to opposing RBs, but somewhere between bottom-10 and bottom-15 over the last 6 weeks (depending on whether or not you want to strip out last week’s game due to the D’Andre Swift injury).

The return of Kyler Murray should be a net positive as well. The threat of vultured touchdowns is much less of a concern now, due to Murray’s ailing ankle, and should in any case be offset by improved gamescript, more sustained drives, more red zone drives, etc. He’s a fringe-RB1 this week.”

From a passing-game standpoint, it’s impossible to ignore that the Bears’ offense has been better with Andy Dalton at the helm. It’s simply a fact. Blame whoever you want for it, but it is factual. Here are some tables from SIS, with Dalton on field and off: 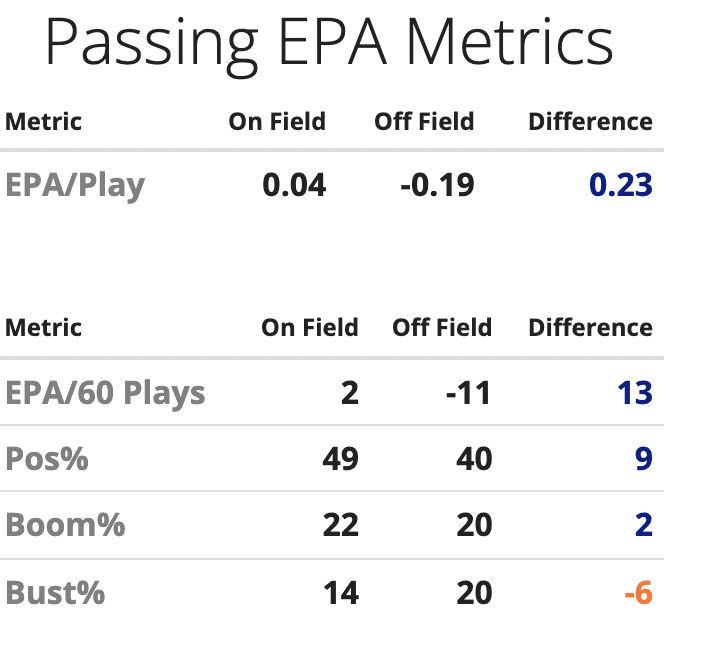 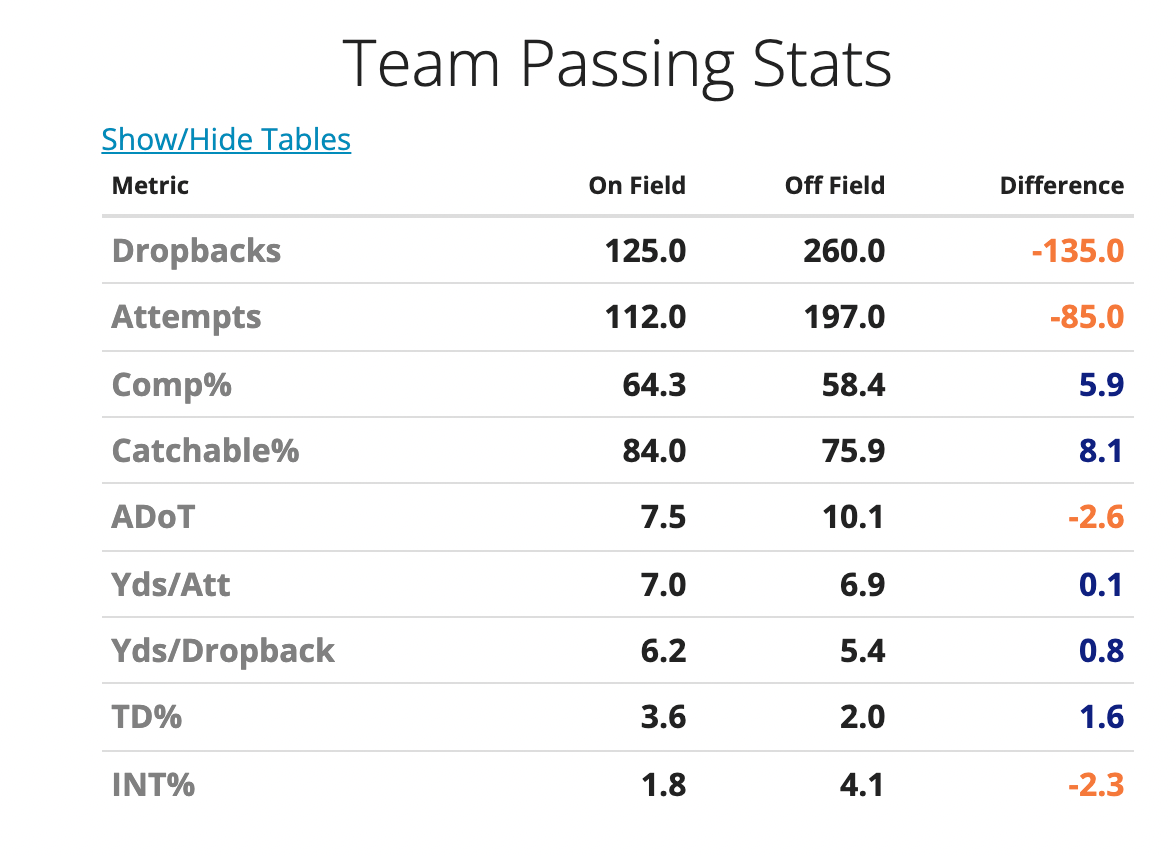 With the exception of aDOT, which isn’t necessarily a “quality” stat but more of a descriptive one, the Bears’ passing game has been better with Dalton in literally every single category than it has been with Justin Fields. So if I have Darnell Mooney or Cole Kmet in my lineup, I want Dalton at QB this week over Fields (ribs). Wish granted.

Over the last two weeks, 24 of Dalton’s 62 passes — a whopping 39% — have been directed at Mooney. That number could stay that high if Allen Robinson (hamstring - doubtful) can’t play.