Hello, and welcome to the Week 11 XFP Report. If you’re unfamiliar with XFP, I’ll get to that in a little bit.

Through 10 weeks of action, here are the top-25 players in expected fantasy points (XFP) per game: 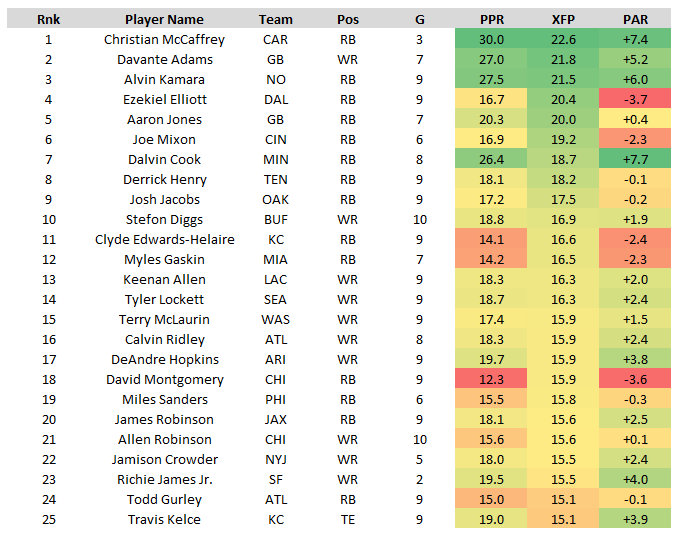 Here’s something I didn’t see coming: J.D. McKissic leads all players in XFP over the last two weeks (51.8), earning +12.1 more than the next-closest RB (Dalvin Cook).

From Weeks 1-8, McKissic averaged only 9.2 XFP per game, with a season-high of just 13.5 in Week 6. In Week 9, McKissic totaled 22.0 XFP, which ranked 2nd-most among RBs, scoring 17.2 fantasy points on 3 carries and 14 targets. In Week 10, McKissic led all players in XFP, totaling 29.8. He scored 17.9 fantasy points on 8 carries and 15 targets. Over the last two weeks, he’s seen a whopping 47 snaps lined up at WR, which is absurd for a RB. And he is seeing phenomenal target-quality (for a RB), with one of his targets last week traveling 23 yards through the air.

This is no doubt troubling for Antonio Gibson owners, though he was productive in Week 10. He scored 22.5 fantasy points, but on just a lowly 14.8-point expectation, earning 13 carries and 4 targets. McKissic more than doubled Gibson’s XFP average over the last two weeks (25.9 to 12.4), while also out-snapping him 99 to 55. On third downs, McKissic out-snaps Gibson 104 to 11.

Smith is under center again in Week 11, but expected game script is more in Gibson’s favor. Washington is favored this week (-2.0), and for just the second time all year. This time against a Bengals defense that ranks 2nd-worst in YPC allowed (5.21). Still, based on the volume McKissic has been getting (granted, in mostly negative game script) it’s not obvious to me that Gibson is the better play this week. And in fact, both are likely strong DFS values, with Gibson priced at $5,800 and McKissic at $5,200 on DraftKings.

Antonio Brown totaled 19.0 XFP in Week 10, which ranked 20th among WRs. He scored 13.6 fantasy points on 8 targets, but could have scored an additional 12.2-points, had Tom Brady not missed him (overthrow) on this play. Chris Godwin totaled just 9.8 XFP on 6 targets but ended his day with 15.2 fantasy points. 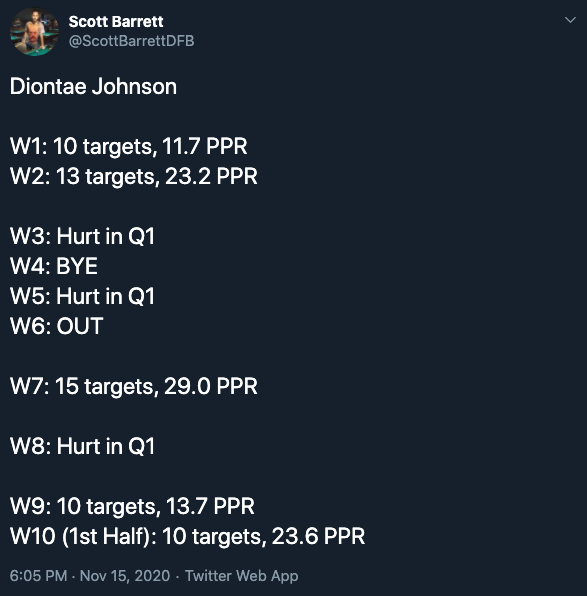 Diontae Johnson only does 1 of 2 things: either he gets hurt in the 1st Quarter, or he sees double-digit targets and goes off.

What did Johnson do in Week 11? He didn’t get hurt in the 1st Quarter, and, well, you know the rules… 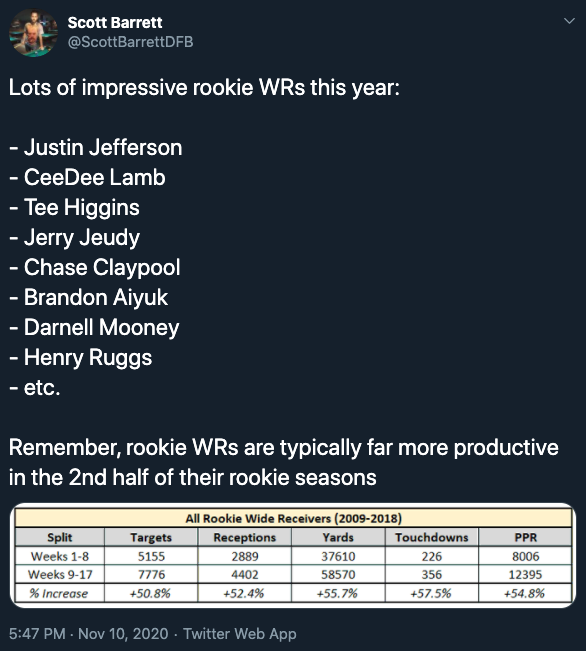 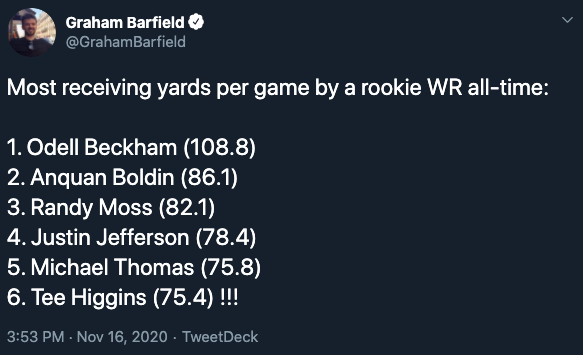 (On if the way RB D’Andre Swift was utilized on Sunday, was how he envisioned using him when Swift was drafted):

Darrell Bevell (11/17/2020): “Yeah, I think it’s kind of been a process for him. Coming in – he wasn’t able to get as many reps as we hoped that he would have at the start of training camp with some of the things that he was working through. So, I feel like we’ve got him up to speed. He’s in a good spot and then showed up in the game. He did a great job with the run game. We were able to get him involved in the pass game as well. As you watched the games prior, I think you can kind of see some of the things that were coming and how we were using him. He stepped up.”

Lockett was DFS chalk in Week 10. He flopped, scoring just 11.6 fantasy points, but the volume was good. He ranked 10th in XFP (16.1), 13th in targets (9), and 2nd in air yards (149). What went wrong? He might have been hurt. Apparently, he came out of the game with “a bit of a knee sprain” and was dealing with a bit of discomfort and swelling on Monday. Lockett played through a “severe” lower leg injury last year and his production suffered considerably for a number of weeks.

- Kalen Ballage totaled 21.0 XFP in Week 10, which ranked 3rd-most among RBs. That represented 80% of Los Angeles’ backfield XFP, with Joshua Kelley getting the other 4.7. Austin Ekeler, Justin Jackson, and Troymaine Pope will be back sooner rather than later, but, yeah… Wild. Kelley can safely be dropped in all formats. 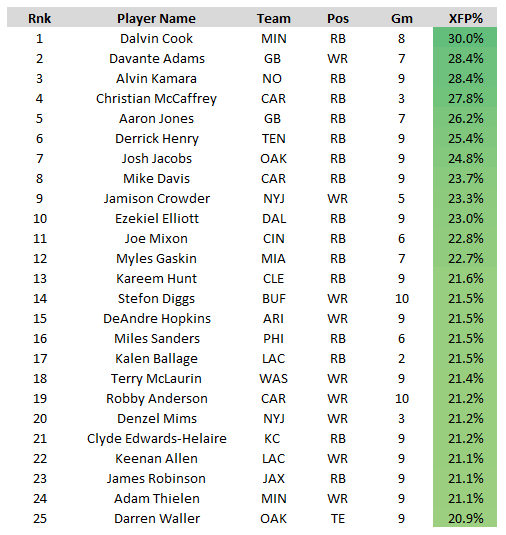