Hello, and welcome to the Week 10 XFP Report. If you’re unfamiliar with XFP, I’ll get to that in a little bit.

Through 9 weeks of action, here are the top-25 players in expected fantasy points (XFP) per game: 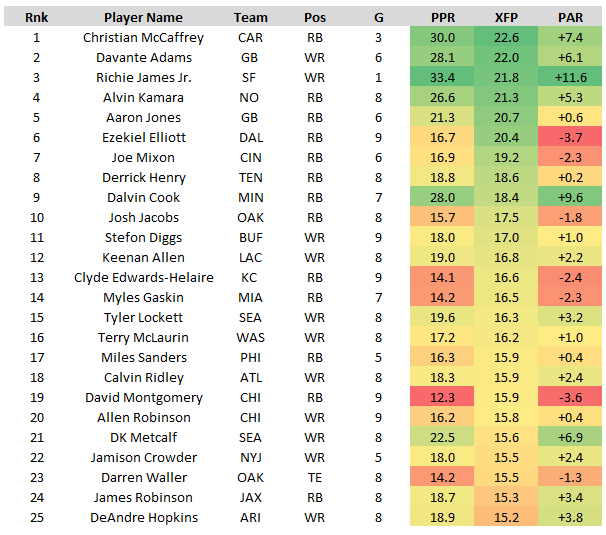 After much touting and much anticipation, the breakout game finally came for Jeudy in Week 9. He scored 25.5 fantasy points on a 25.6-point expectation (2nd-most on the week). In total, he turned 14 targets, 172 air yards, 3 deep targets, and 1 end zone target into 7 catches for 125 yards and a score. 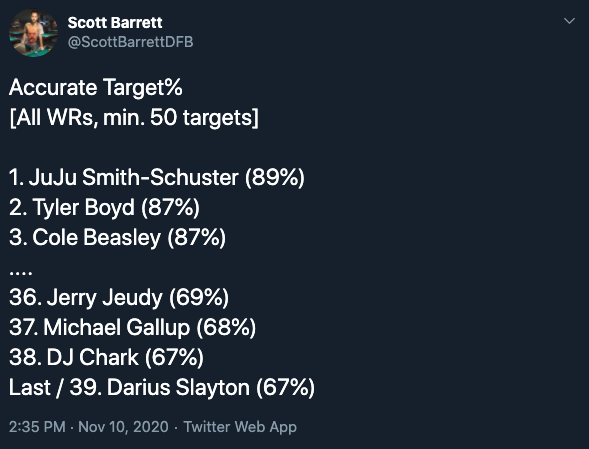 As is often the case for rookie WRs, I’m expecting a big second-half from Jeudy – much bigger than his first half. He’ll unfortunately continue to be hamstrung by poor QB accuracy all year, but I do expect his talent to rise above it for the most part.

DJ Chark and Darius Slayton have similar problems. Chark ranks 15th in XFP per game (14.4) but just 26th in FPG (14.4). Slayton ranks 28th (12.3) and 47th (11.1). While Daniel Jones will be an issue for Slayton all year, it was very encouraging to see Jake Luton key in on Chark and try to push the ball down the field. (Gardner Minshew seemed to play a bit more conservative while also preferring to spread the ball around a bit more.) Chark’s 19.3 XFP in Week 9 ranked 9th-most on the week. He scored 27.6 fantasy points on 12 targets, 169 air yards, and a season-high 4 deep targets.

Edmonds scored just 11.8 fantasy points on 28 touches and 96% of the snaps in Week 9. Or, for more clarity, 11.8 fantasy points on a 16.8-point expectation. He saw 25 carries and 3 targets, but 0 opportunities inside the 10-yard-line. This was always the concern for Edmonds – we knew he’d see a true bell cow workload, but his touchdown expectation wasn’t nearly as high as it is for most bell cows, with Kyler Murray often vulturing rushing work near the end zone. Still, this was just about the worst-possible outcome, and one of the lowest XFP outputs you’ll find from a 28-touch game. If Kenyan Drake sits out again, he’ll rightfully be pretty chalky ($6,300 on DraftKings) in Week 10 against the Bills.

Some sort of regression seems inevitable, but, man… Based on these numbers, and with Aaron Rodgers looking the best we’ve seen him since 2016, he still feels mispriced by at least $1,000 on DraftKings. Expect him to be mighty chalky this week despite the $9,000 price-tag.

Over the past two weeks, Cook leads all players in FPG (43.9, by +12.0) but ranks just behind Davante Adams in XFP per game (24.2). Yes, that means he’s outscored his expectation by a whopping 39.3 fantasy points (19.7 per game) over this span. Cook is one of the best and most efficient RBs in the NFL, and he just faced Detroit and Green Bay, who are giving up the most- and 2nd-most FPG to opposing RBs, but this is really absurd. He leads all players in PAR (+67.0), followed by DK Metcalf (+55.2), Tyreek Hill (+42.3), and Alvin Kamara (+42.0). Expect a slight regression to the mean as his schedule toughens, but also expect him to finish top-5 in PAR, just like he did last season.

Hill led all players in XFP in Week 9, totaling 34.4, which was also the 2nd-most by any player this season. He turned 18 targets, 231 air yards (2nd-most by any player this season), 1 rushing attempt, 3 end zone targets, 3 deep targets, and 2 opportunities inside the 10-yard-line into 33.1 fantasy points. Believe it or not, this was just his first 100-yard-game in nearly a year. Still, he’s scored 9 times in as many games, and ranks 4th in FPG (19.6). He *only* ranks 14th in XFP per game (14.9) and is one of our top TD regression candidates – out-scoring his TD expectation by 5.2, which ranks 2nd-most – but that’s long been the case with Hill, so I wouldn’t read too much into it. Basically, he’s a hyper-efficient freak of nature, and his “mean” is a good deal higher than the mean of a perfectly average WR.

Per Ian Rapoport on Sunday morning, “The Panthers are expected to have RBs Christian McCaffrey and Mike Davis rotate series to keep them both fresh.”

Mooney flopped in Week 9 (9.3 fantasy points), but his volume was excellent. He scored a season-high 20.6 XFP (8th-most on the week), earning 11 targets, 137 air yards, 3 end zone targets, and 4 deep targets. His volume continues to trend in the right direction, averaging 15.0 XFP over his last 3 games. If over a full season that would rank 13th-most. Efficiency has been poor, but that’s been true for every Chicago receiver.

Soon after proclaiming the triumphant return of the demigod known as “Gronk”, Gronkowski posted his worst game of the season, scoring just 1.2 fantasy points on a 13.8-point expectation. Still, his volume was good in a Week 9 where everything that could go wrong did go wrong for the Buccaneers. Since Week 6, he ranks 5th in FPG (13.0) and 4th in XFP per game (13.9).

Some other TEs of note:

Over the same span, TJ Hockenson ranks 2nd in FPG (13.8) and 2nd in XFP per game (15.3). He’s finally seen an uptick in target volume (recording 18 targets over his last 2 games), but is going to continue to be highly touchdown-dependent. He ranks 46th among all players in targets (49) but ranks 1st in targets inside the 5-yard line (6) and 2nd in end zone targets (9). He ranks behind only Mike Evans in XTD per target (0.11).

Jimmy Graham has been far more fantasy-viable than the fantasy community has given him credit for. He’s seen at least 5 targets in 7 straight games, averaging 6.7 per game. He ranks 7th in XFP per game (11.2) and 10th in FPG (10.6). He ranks closely behind Hockenson in XTD per target (0.085), and he averages just 33.6 YPG, so he’s probably even more touchdown-dependent than Hockenson. And rookie TE Cole Kmet has been eating into his route share in recent weeks, capping him at about 66%, though he started off the season averaging around 77%.

- James Robinson saw his snap share jump from 61% to 90% in Week 7 with Chris Thompson out. With Thompson back in Week 9, after their bye, his snap share was somewhere comfortably in between (73%). Robinson saw 25 of 26 carries and 2 of 6 targets out of the backfield. Keep in mind, this was in a game Jacksonville trailed throughout (better suited towards Thompson’s skillset as the scatback). If Robinson still isn’t quite a true game script-proof bell cow, he’s at least very close.

- Cincinnati comes off their Week 9 bye with a healthy Joe Mixon who missed Weeks 7 and 8 due to injury. Don’t forget, across Weeks 4-6 (with mixed game script), he averaged 71% of the snaps along with 22.6 XFP, 22.3 carries, and 5.7 targets per game. For clarity, 22.6 XFP per game was good enough to lead all RBs over this span. Don’t sleep on him in DFS this week, despite the brutal matchup (@ Pittsburgh).

- With San Francisco’s receiving corps in shambles, and in his first start of the season, Richie James posted a monster game in Week 9. He scored 33.4 fantasy points on a 21.8-point expectation. In total, he turned 13 targets, 132 air yards, and 3 deep targets into 9 catches, 184 yards, and one touchdown. With Brandon Aiyuk and maybe Deebo Samuel back in Week 10, don’t expect a repeat performance, but still, this is at least worth noting.

- Similarly, Jakobi Meyers had himself a big breakout game in Week 9. He totaled 23.2 XFP (4th-most among WRs), turning 14 targets and 172 air yards into 28.9 fantasy points. I’m not too bullish we see a game like this from him again, but he might be worth a speculative add in deeper leagues.

- Preston Williams saw 5 targets on just 8 routes, hauling in 4 for 60 yards and a score before leaving the game early due to a foot sprain. He might have been a slate-buster had he stayed healthy. 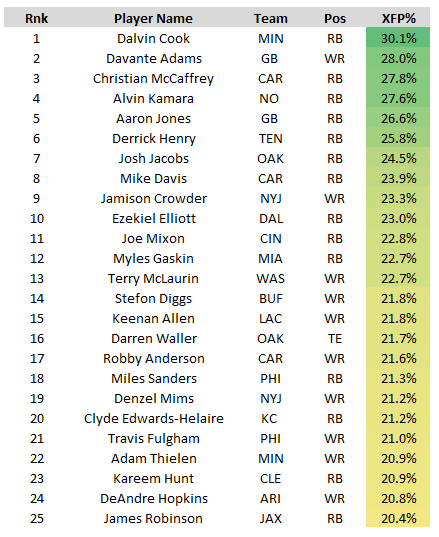