That’s what I’ll be doing in this article, using both resources to help me highlight the top main slate DFS Value Plays in any given week. Here’s Week 11:

Note: This is just the first-pass publish of the DFS SuperModel. The SuperModel and our projections will continue to update throughout the remainder of the week.

Unfortunately, Swift is still in the concussion protocol and is in danger of sitting out against the Panthers. Even if he plays, he’s already missed multiple days of practice, and that’s never good. If he sits, pivot to Adrian Peterson at minimum price on DraftKings ($4,000). If he plays, don’t be shocked if he sees a reduced workload this week, and the SuperModel was a little too bullish, unable to account for this important variable.

According to our projections, Herbert is the top QB value this week, providing 3.34X value on DraftKings and 2.67X value on FanDuel. Here’s what we had to say about him in Start/Sit:

Since Week 4 (his 3rd career start), Herbert averages 26.3 FPG, which ranks 2nd-best among QBs, behind only Kyler Murray. He’s reached 40 pass attempts in 3 of his last 4 games, and averages 6.0 rushing FPG over this span. All of this, meanwhile, has been accomplished in spite of the league’s 4th-toughest QB schedule to-date, worth about -1.0 FPG off of his per-game average. This week, he gets a top-5 matchup, and his best matchup since he torched the Jaguars to the tune of 38.5 fantasy points in Week 7. The Jets are giving up the 4th-most FPG to opposing QBs (22.4), while also ranking bottom-5 in opposing passer rating (103.8) and passing fantasy points allowed per pass attempt (0.632). He’s an easy must-start top-5 QB this week.

Harris is PFF’s 5th-highest-graded rusher (83.9), averaging 5.54 YPC, and hitting 100 yards rushing in 3 of 6 games. The volume hasn’t totally been there, as he’s averaging just 14.2 carries and 0.3 targets per game, but this is a great week for career-highs in every stat. New England is favored by 2.5 points, and the Texans rank worst in YPC allowed (5.53) and worst in rushing FPG allowed (22.8) to opposing RBs. He’s a total non-factor in the passing game, and has earned just 66% of the team’s carries and 60% of the carries inside the 10-yard-line since Week 7, so he is risky, but he’s also a top value. Per our projections, he’s actually the top-overall value at the RB position, returning 3.19X value on DraftKings and 2.58X on FanDuel.

Pittman – a Fantasy Points-favorite – finally had the breakout game we’ve long awaited, torching the Titans in Week 10, catching 7 of 8 targets for 101 yards. The week prior, in his 3rd career start, he caught only 4 of 7 targets for 56 yards (in a tough matchup against the Ravens), but earned high-praise from Greg Cosell for how good he looked on tape. According to our projections, he’s your top WR value on FanDuel (2.11X) and your No. 3 WR value (3.13X) on DraftKings this week.

Jaire Alexander is banged up, though he should play this week. Still, he’s unlikely to shadow, which means Pittman gets a neutral matchup against a Packers defense that is surrendering the 17th-most FPG to opposing outside WRs (21.3). He’s by no means a lock, but he is a strong value, priced at just $4,500 (DK) and $5,500 (FD).

According to the SuperModel, Johnson ranks 1st on FanDuel (+959) and 2nd on DraftKings (+789) in terms of value. Here’s what we had to say about him in the XFP Report: 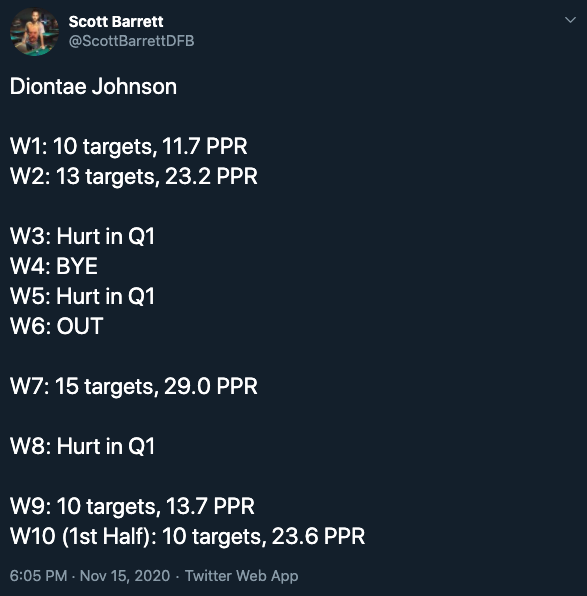 Diontae Johnson only does 1 of 2 things: either he gets hurt in the 1st Quarter, or he sees double-digit targets and goes off.

What did Johnson do in Week 11? He didn’t get hurt in the 1st Quarter, and, well, you know the rules…

Johnson is no-doubt severely mispriced and there’s a good chance he’s about $1,300 cheaper now than where he ends the season, but he also might have the toughest matchup of Pittsburgh’s 3 WRs. According to Wes Huber, there’s a chance Sidney Jones shadows. Among all starting CBs (this week), Jones ranks 7th-best in PFF Grade (75.5), while C.J. Henderson – Jacksonville’s other outside CB – ranks 47th (57.9), and Tre Hendon – the slot CB – ranks 74th (48.2). Still, Jones ranks 2nd-worst of 84-qualifying CBs in yards allowed per snap in coverage (2.14), so I’m not too worried.

Jacksonville is giving up the 9th-most FPG to opposing slot WRs (7th-most fantasy points allowed per target) and the 12th-most FPG to opposing outside WRs (7th-most fantasy points allowed per target). They’re giving up the 10th-most schedule-adjusted FPG to opposing WR1s and the 7th-most to opposing WR3s. Really, this is a great matchup for all of Pittsburgh’s WRs, all are great values, and all are firmly in play. Per the SuperModel, Johnson leads all WRs in value on FanDuel (+959), but Smith-Schuster ranks 2nd (+953), and Claypool ranks 3rd (+913).

It can be easily argued that McLaurin’s had the league’s toughest CB draw to-date. Shadow coverage from Darius Slay (Week 1), Patrick Peterson (Week 2), James Bradberry (Weeks 6 & 9), Trevon Diggs (Week 7), and Desmond Trufant (Week 10). His 3 non-shadow games came against the league’s toughest, 2nd-toughest, and 15th-toughest defenses against opposing outside WRs. It’s also even easier to argue that McLaurin’s been the most disadvantaged WR by poor QB play. And still, he averages 17.2 FPG (11th-most) on 9.6 targets per game (6th-most). The good news is, this matchup appears soft – the Bengals are giving up the 4th-most FPG (27.4) and the 2nd-most fantasy points per target (2.24) to opposing outside WRs, which is where McLaurin runs 75% of his routes. Better yet, Alex Smith may be a big improvement on Kyle Allen and Dwayne Haskins. McLaurin averages 8.5 targets, 105.0 yards, and 21.4 FPG over the last two weeks with Smith under center.

If Teddy Bridgewater sits out, all bets are off. But as it stands, Anderson is popping as our No. 4 WR value on FanDuel (behind the 3 Pittsburgh WRs) as per the SuperModel (+659).

Anderson ranks 9th in targets per game (8.8), 13th in XFP per game (14.5), and 10th in YPG (77.2). He’s gotten a little unlucky in the touchdown department, failing to find the end zone in each of his last 9 games, but is due for a regression in that regard. And has offered a sky-high floor in spite of that bad luck. He’s glaringly mispriced as just the 22nd-highest-priced WR on FanDuel, and the matchup is soft. We’re projecting Desmond Trufant to shadow D.J. Moore, leaving Anderson on Amani Oruwariye, who we’ve been targeting in DFS all year.

Conley has seen 8 targets in back-to-back games, 1 off of D.J. Chark’s team-high 19 targets, totaling 11 catches for 95 yards over this stretch. Laviska Shenault is likely to sit out again, though, all bets are off if he plays. The Steelers are probably a neutral matchup, giving up the 22nd-most FPG and the 6th-most fantasy points per target (2.02) to opposing outside WRs. But, really, the argument is simple – he shouldn’t be minimum priced and he is on DraftKings ($3,000).

Goedert is our top TE value on DraftKings per the SuperModel, and a top-2 value overall (+932).

He remains a top play for all of the reasons he was a top play last week, though he failed to pay off. He ended last season hitting double-digit fantasy points in 8 of the last 10 games, averaging 6.9 targets and 12.4 FPG. Prior to injury, he averaged 8.5 targets and 15.6 FPG. Keep in mind, this was with Zach Ertz on the field. He’s struggled recently while dealing with injury, but he’s run a route on 79% of Carson Wentz’s dropbacks over his last two games. He gets a top-6 matchup this week, after a bottom-6 matchup last week – the Browns are giving up the 6th-most schedule-adjusted FPG to opposing TEs (+2.6).

Truthfully, I’m not so sure why he flopped last week. But he certainly shouldn’t be only $3,800, and he does offer sky-high upside with Ertz still out.

Andrews is popping as a top-5 value on DraftKings per the SuperModel (+834), though he’s still slightly behind Goedert. Here’s what I had to say about him in Start/Sit:

Andrews saw season-highs in routes run (33), targets (9), catches (7), and receiving yards (61) in Week 10. It’s no coincidence that this was also a game in which Nick Boyle left early with a gruesome knee injury. He’s now out for the year, opening a pathway for Andrews to finally see a full-time workload – he’s played on just 65% of the team’s snaps thus far. He also gets a premier matchup against a Titans defense that is giving up the 4th-most schedule-adjusted FPG to opposing TEs (+2.7). Start him with confidence as an easy top-3 TE this week.