Hello, and welcome to the Week 9 XFP Report. If you’re unfamiliar with XFP, I’ll get to that in a little bit. 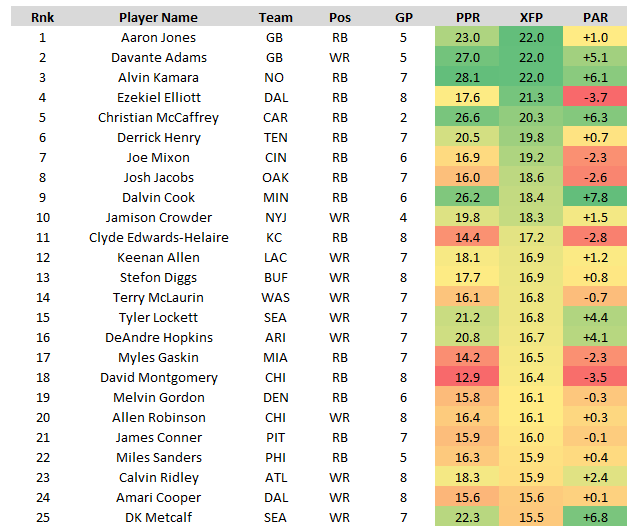 Still, Alvin Kamara is the more valuable fantasy asset. He only barely trails in XFP (21.97), and laps the field in FPG (28.1, +5.1 more than Jones). I would typically argue a PAR of +6.1 is unsustainable, but Kamara has long posted unsustainably great PAR numbers throughout his career, so I’m not too worried. The bigger concern is the looming return of Michael Thomas. When Thomas is out, Kamara sees Christian McCaffrey-esque usage and produces at a rate which only Christian McCaffrey can compare. With Thomas on the field, Kamara does tend to see a dropoff in passing game volume. Still, he’s an easy bet to finish top-3 at the position.

On paper, Montgomery is a glaring buy-low candidate, but maybe only on paper. Since Week 5, Montgomery is averaging 19.8 XFP per game (4th-most) along with 98% of the backfield XFP (most). However, he’s been massively inefficient on that good volume, averaging just 14.3 FPG over that span (21st). This includes just 13.7 fantasy points against Carolina (4th-worst in FPG allowed to RBs) in Week 6.

He’s had a neutral to slightly-above-average strength of schedule thus far, but he has the position’s 2nd-softest schedule throughout the remainder of the season – 6 of his remaining 8 games come against teams ranking bottom-10 in schedule-adjusted FPG allowed to opposing RBs. Is he a glaring regression candidate or is he a regression trap? Good question! I think he’s going to regress positively, but I’m not convinced he’ll be able to consistently return the production his RB1-esque volume implies.

Adjusting for the fact that Allen played in only one quarter in Week 5, Allen is averaging 20.2 XFP, 22.7 FPG, 102.7 air yards, and 13.0 targets per four quarters since Justin Herbert took over in Week 2. Even more ludicrously, he’s been targeted on 34% of Herbert’s throws over this span. That’s elite high-end WR1 volume and production. Look for another big game this week against a Raiders slot funnel defense that is allowing the 7th-most FPG to slot WRs but the 4th-fewest FPG to outside WRs.

In Week 8, with Chris Carson (out), Carlos Hyde (out), and Travis Homer (limited) all banged up, Dallas played on 53 of 67 snaps (79%), earning 18 of 20 carries and 5 of 6 targets. In total, he scored 22.8 fantasy points (3rd-most) on 25.3 XFP (3rd-most), earning 99% of the backfield XFP (2nd-most) and 28% of the team’s XFP (5th-most). We’ve seen this before – depleted backfields creating massive opportunities for 2nd-, 3rd-, and even 4th-string RBs. RB is the most volume-dependent position in fantasy, and also perhaps the most easily replaceable from a real-NFL standpoint.

So, similarly, if Aaron Jones, Jamaal Williams, and A.J. Dillon all sit out this week, don’t be surprised if Tyler Ervin or Dexter Williams posts a big game. Over the last two weeks, with Jones out, Williams averaged 19.5 XFP (2nd-most), commanding 80% of his team’s backfield XFP.

But what I didn’t expect was poor efficiency (-2.6 PAR). Especially after Jacobs put together an all-time great rookie season by a number of metrics I’ve found to be most meaningful (missed tackles forced per touch, Elusive Rating, etc.). Jacobs has fallen 18.5 fantasy points shy of his expectation, after out-scoring his expectation by 21.5 fantasy points last year. Look for that number to positively regress as the season progresses.

We were enamored with Jeudy during the draft process, but he’s been pretty disappointing to own in fantasy this year. In April, Greg Cosell called Jeudy the “top wide receiver prospect in the class” comparing him to both Odell Beckham Jr. and Antonio Brown. I talked to two tape experts off the record over the past 5 days. Here’s what they had to say (paraphrased) about Jeudy:

Expert 1: “Bro, this is the same Jerry Jeudy from college. He’s getting open on every single play. He looks amazing. But I have no idea why he’s not getting the ball.”

Well, lo and behold, Drew Lock finally decided to look Jeudy’s way in Week 8. He totaled 17.1 XFP (10th-most), on 10 targets, 154 air yards, and 4 deep targets. He only scored 11.3 fantasy points, but, again, this sort of volume is encouraging – he averaged just 7.3 across his previous three games. I’m optimistic he turns things around in the second-half.

Through the first 4 weeks of the season, Gaskin averaged 14.1 XFP per game, commanding a 53% XFP share of Miami’s backfield. Over the next 4 weeks (with Jordan Howard ruled a health-scratch in each game), Gaskin averaged 19.7 XFP per game with a 77% share of the team’s backfield XFP. For perspective, that’s the difference between ranking 21st-and 6th-best at the position. He wasn’t super-efficient on that good volume (-2.3) but was good enough to be ranked as a fringe RB1 each week. Unfortunately, he’ll be sidelined for the next 3 games with a sprained MCL. Expect Matt Breida to handle most of the work while he sits out.

Landry saw terrific usage in Week 8, earning 21.4 XFP (4th-most) along with a 39% share of the team’s total XFP (2nd-most). Perhaps we should have seen this coming in Cleveland’s first game without Odell Beckham Jr., but he still wasn’t very productive on that good volume (9.2 fantasy points on 11 targets). Nor has he seen good volume in any other game thus far. He averages just 10.9 XFP per game (44th) and 9.4 FPG (62nd), and appears to still be hampered by a lingering hip injury. 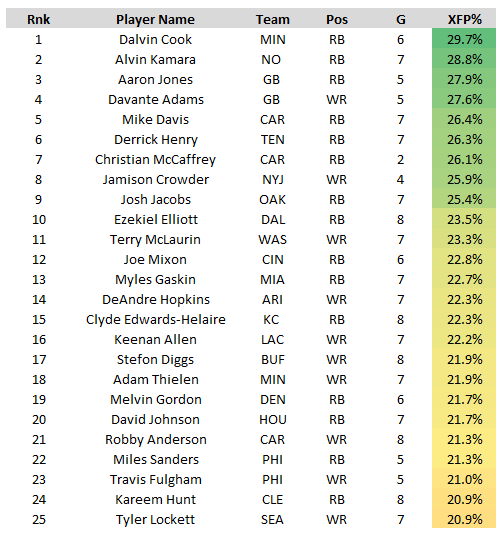