Selecting a QB near the turn of the first and second round of next year’s 2022 single-QB fantasy football draft will be an analytically sound data-driven decision. You heard it here first.

I’m announcing this take now to allow the remainder of the 2021 NFL season to provide validation. Even so, I am ready to be shunned, castigated and excommunicated by the old school fantasy traditionalists. But someone needs to be the Copernicus when new data is available. So bring on the Twitter ratios, cry laughs and clown emojis. I want it all. Just remember where you heard this first because sooner or later this will all be common knowledge.

Extraordinary claims require extraordinary evidence, so let’s get right to it. There are a few major considerations I’ll dive into to make my case:

You might be well versed in this concept by now, but if not, Michael Liu did a great job this past January encapsulating the research on it including Rich’s original article and additional work by Fantasy Points’ very own Scott Barrett.

[THREAD]: How important is it to have a #KonamiCode QB for fantasy?

It is more important than ever. Once a rare resource, it's now a basic necessity if you want to be competitive at the position.

The chart below shows % Konami in the top 12 PPG QBs by year. Let's dig in... pic.twitter.com/gJojHacPEu

One of the graphics Michael uses shows the percentage of rushing fantasy points coming from the top-12 scoring QBs each year – including a huge spike starting in 2019 and growing in 2020. I took a look at the 6-week sample size so far for 2021 and the near 20% rushing point share of top-12 QBs seems to be the new normal in today’s game.

But the Konami Code idea has been around for a while and until now, no one has suggested you should take a QB as early as the Round 1 turn. Why now? Well, historically it was very hard to tell which QBs would turn out prior to the season. Cam Newton was the best QB in 2015 before falling off the map in 2016. Aaron Rodgers led all QBs in 2016 before also fading in 2017, all the while Cam yo-yoed his way back into the top-5. And Russell Wilson’s top-performing 2017 season was encored by a subpar QB8 in 2018. The same logic is much of the reason why kickers and DST’s are draft day afterthoughts – they are complete rolls of the dice whether you use a high capital pick or not.

But now we have the following data since the surge in Konami usage in 2019 that supports such a claim:

The 2019 surge – as illustrated in Michael Liu’s thread – seems to have changed the game entirely in terms of year-over-year QB predictability. I correlated each major fantasy position’s relationship between ADP and end of season production for the 2020 season – the season immediately following the 2019 Konami spike.

The graph below shows the relationship between 2020 ADP and 2020 end-of-season position rank (by WAR) for all major fantasy positions. Starting by grouping the top-five drafted players at each position (left-most on x-axis), the corresponding point on each line reveals the correlation between WAR for only those five players. As you continue moving right along the x-axis, the same rule is applied for the top-six players at each position, top-seven, etc: 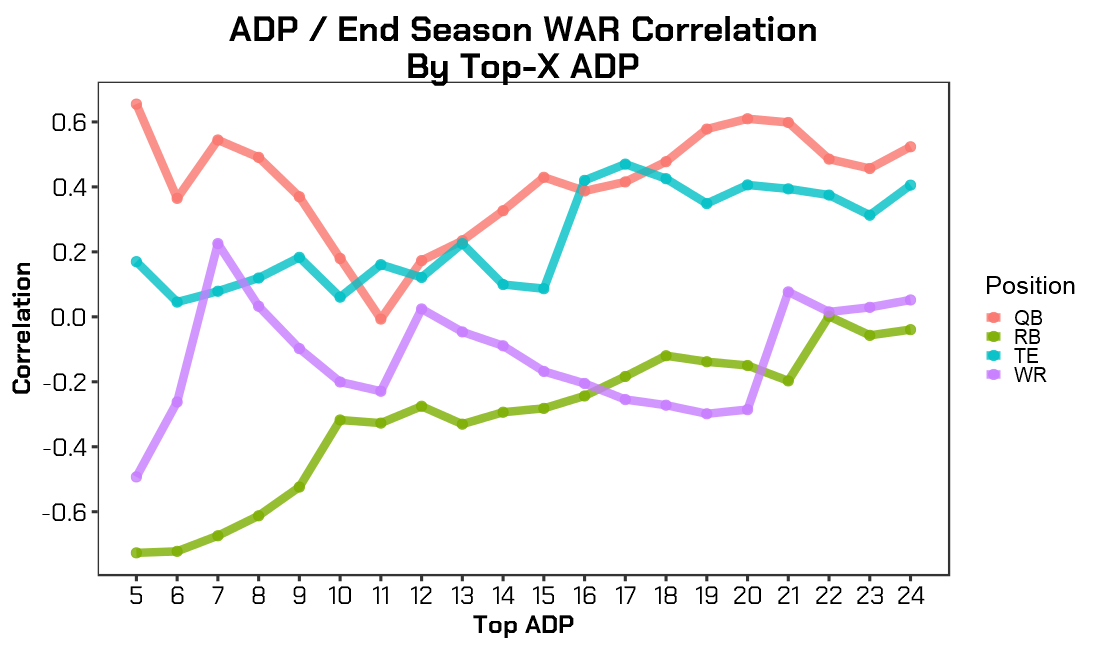 There is no mistake which position was the most predictable for not only the most important (top-5 by ADP), but consistently across the top-24: QB. Tom Brady and Jalen Hurts explain the drastic dip in correlation between ADP8 and 11 as they have drastically overachieved their ADP, but there will always be a few surprises like this in real-world data. 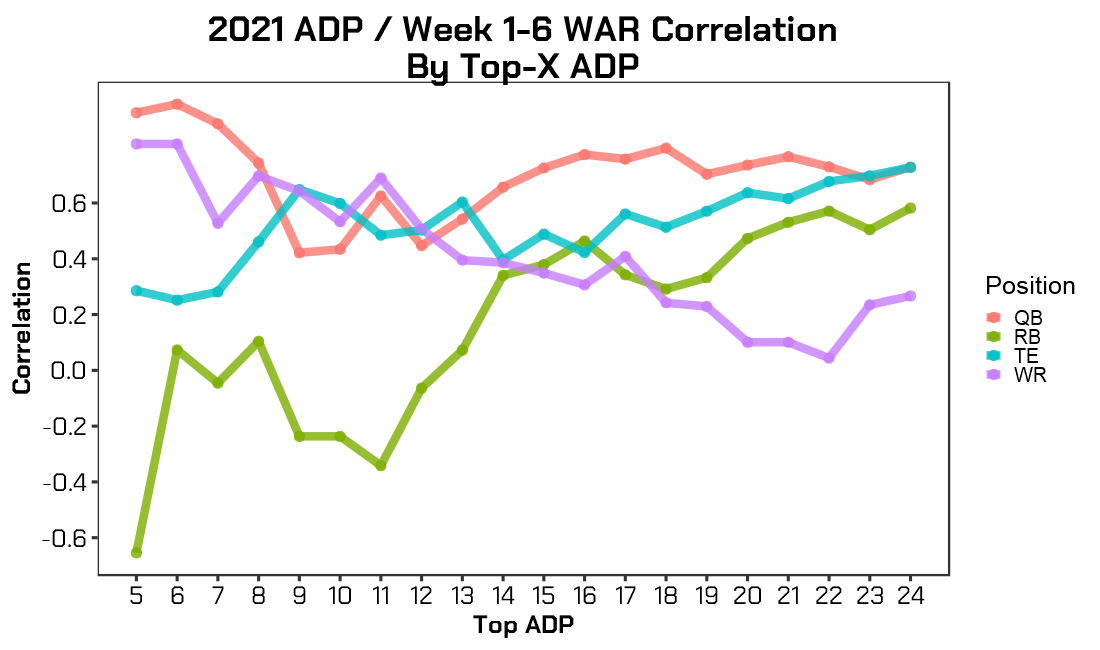 Overall, the subtle differences don’t detract from the similarity to the 2020 graph. The QB position is now the most predictable as evidenced by ADP / WAR correlation. While there is a pile-up between QB, WR, and TE between ADP-8 and ADP-12, QB remains the most predictable position where it matters most: for the top-5 in ADP.

Sticking with just the top-5 ADP: the graph below shows the progression of QB predictability of season success by ADP since 2015 (as far back as my ADP goes). 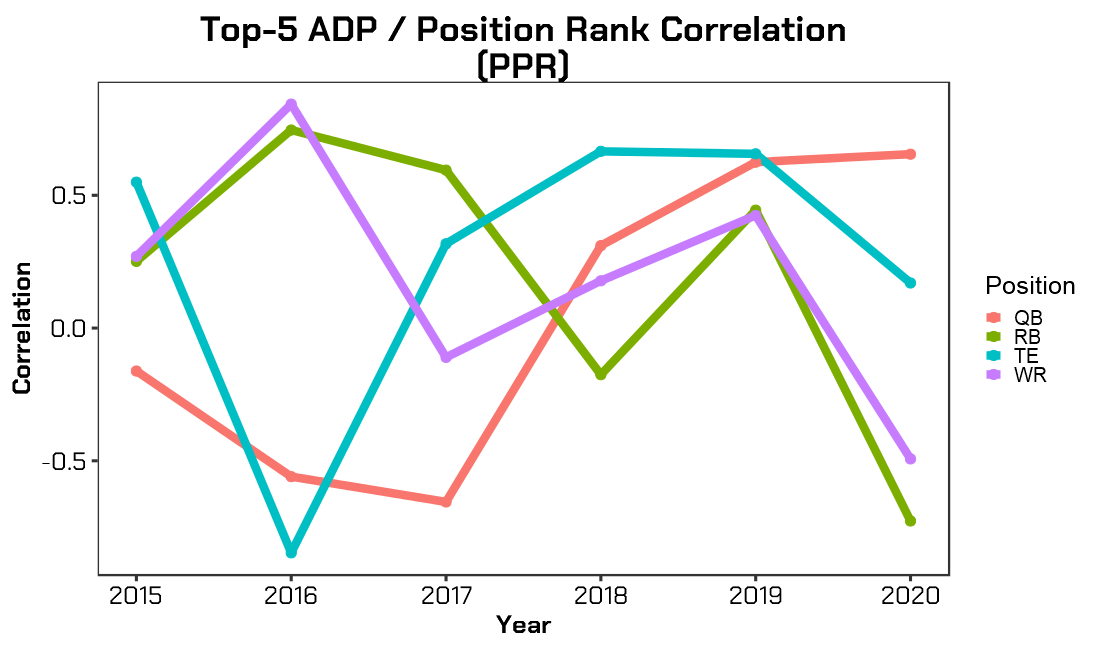 Focusing on the red QB line, you can see QB was significantly less predictable than any other position for top-5 selections from 2015 through 2017. Aside from a clear outlier year for TE, QB was a total crapshoot comparatively. This graph justifies the old-school strategy of waiting on QB while also providing clear support that times have drastically changed.

We now have confidence in two out of the three considerations I laid forth. First, Konami-style QB usage in the NFL is here to stay for the immediate future after spiking considerably in 2019. Second, likely because of this surge in Konami-style usage, the top-performing QBs from the prior year can predict (by way of ADP) production the following year better than any other position.

This leaves one major consideration left to present. It’s great that we have confidence that the Konami QB era has settled in 5th gear and is ready to coast. It’s also great to have confidence in year-over-year predictability. But that doesn’t mean the production is worthy of a Round 1 valuation in fantasy drafts. We now turn to the metric that can identify the exact draft selection any player ends up being worth to fill in the final gap: Wins above replacement.

For those new to WAR, you can read the nitty-gritty methodology here. The connection WAR has here is its ability to reveal what selection top-drafted QBs were worth. Below are the full-2020 season results along with the 2021 Weeks 1-6 results: 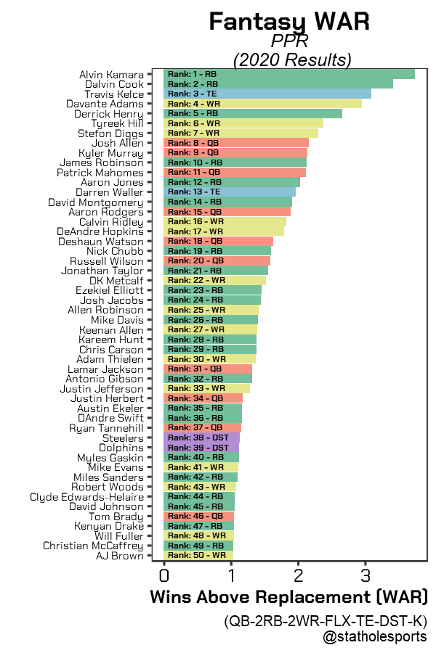 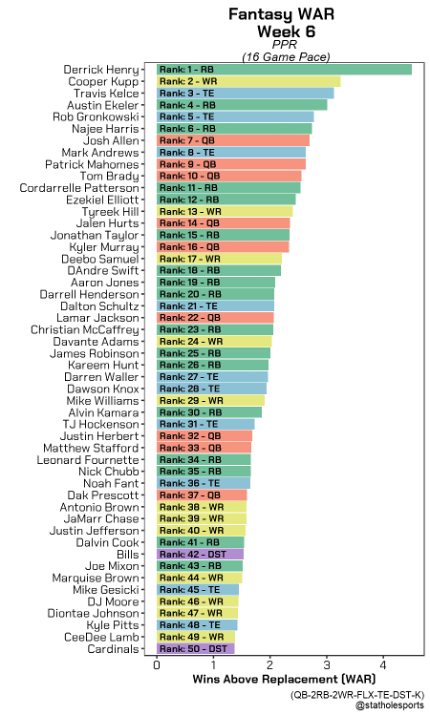 The year-over-year trend is apparent for the QB position. The top performers are finding their way into the latter half of Round 1 worthiness for conventional single-QB formats. Of the top-three performers in 2020 (Allen, Mahomes, Murray), Murray has been the least productive in 2021 and still holds a middle Round 2 value (rank 16).

Prefer tables and conditional formatting? I got you. Here’s a table honing in just the top-12 drafted QBs of 2021 in order of ADP: 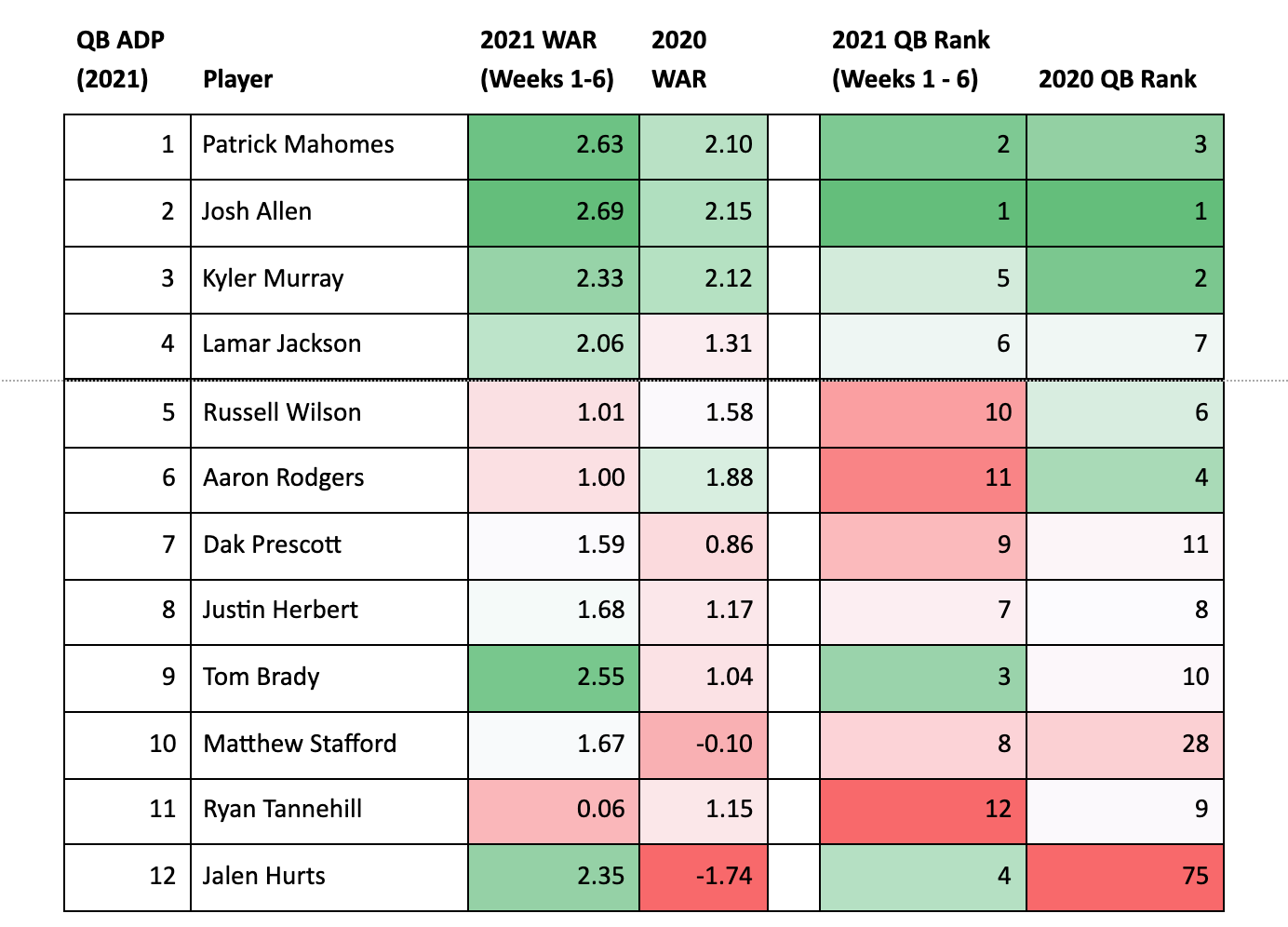 You still might be skeptical about taking a QB as early as Round 1 in 2022. That’s why I writing this article now. I have enough confidence in the data, and will follow-up with results for weeks 7-17 (end of fantasy season) to see if the correlations and WAR rankings remain consistent. For the nerds out there, this will act as my out of sample set in this pseudo-model approach.

But here’s the thing. Even if weeks 7-17 remain consistent, there’s still gamesmanship to account for. If a crystal ball told an NFL GM that Tom Brady was going to be drafted with the 199th pick and would become an all-time legend, it would be pretty dumb to draft Brady in the first round. May as well wait until Round 5. A similar thing might be true here for fantasy QBs. Mahomes was ADP 18 in 2021, Josh Allen was 29, and Kyler Murray was 40. If ranks fall similarly in 2022 for the top-3 in ADP, you might still get more value out of taking the QB2 or 3 despite expecting less than the QB1. But that’s an article for a different day.

For now, pay attention to how the top-ADP QBs perform rest of season after you hit me with your clown emojis and memes. Get ready to change the way you think about QB on draft day. Get ready to consider a QB after the major RBs, and Travis Kelce are gone by late Round 1. The new era of fantasy QB is here. Just remember the clown who told you first.