A good place to start when preparing for players to target in your 2022 fantasy football draft is to see how they did in 2021. Pretty genius tip, I know. But comparing a player’s ADP to how they performed the year prior hasn’t exactly been a clean endeavor in the past. Thanks to fantasy footballwins above replacement (WAR), the game has changed. It’s now possible to reference the exact selection in fantasy drafts any player ended up worth being taken and using this information as a tool to supply player valuations for the upcoming 2022 draft.

Of course, team environments change from year to year — whether it’s a QB losing a stud WR (Patrick Mahomes, Aaron Rodgers), or a player changing teams (Amari Cooper, Tyreek Hill, Davante Adams). That makes referencing last year’s production less valuable. For this article, I’m going to focus on players with team environments that are at least relatively similar to 2021 – with a couple exceptions of players that should be in better if not the same team environment.

Focusing your draft on value picks shouldn’t be the primary focus of your draft. You should be targeting high-upside league winners. But knowing where value exists can help you plan to fill in the gaps once you’ve selected your breadwinners. In fact, some of those breadwinners will appear here as well. Successfully filling your team’s gaps with value could be the difference from compiling a playoff pretender and a championship contender. Below are 37 players in the top-100 ADP by FantasyPros who are being drafted later than the WAR rank they earned in 2021. Many names on this list include those with environmental changes that make such “values” on paper fool’s gold (Tyreek Hill, Aaron Rodgers without Adams, DeAndre Hopkins suspended, etc.), but the goal here is to identify some names to keep an eye on as your draft approaches. 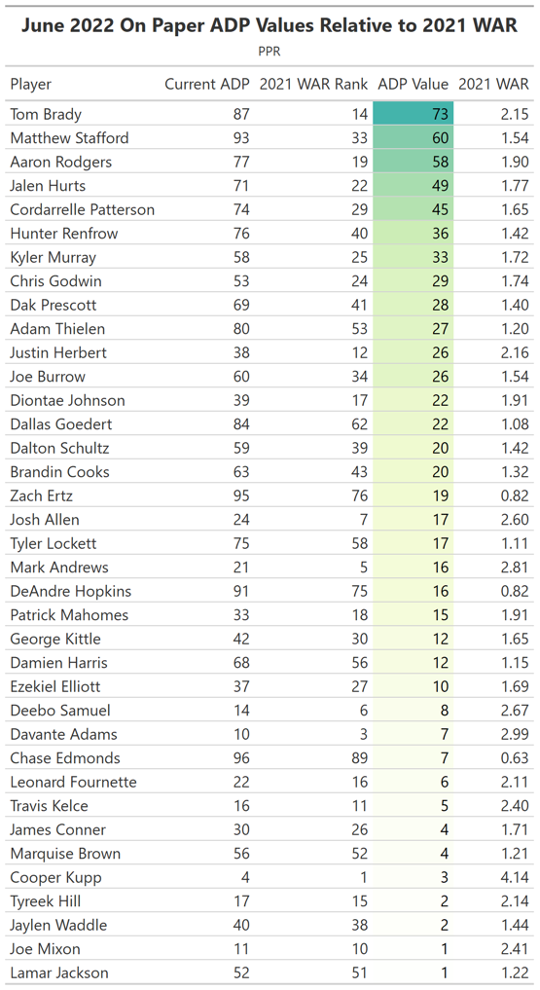 Many names on the top of this list scream “FRAUD.” Rodgers lost the league’s best WR, Cordarrelle Patterson is now labeled as an RB, Hunter Renfrow now has to compete with the league’s best WR, Kyler Murray lost his best WR for half the season, etc. But many of these names are on much more sturdy ground. I hand-selected my top-10 values worthy of your consideration and you can refer to the list above to consider your own. Let’s get to it.

As required by law, every fantasy football value article published in the last five years must reference Cooks. Taking this guy in fantasy is like investing in a six-month CD. You are guaranteed to come out ahead — but just a little bit. While Round 6 is the time to shoot for high-upside hopefuls, taking Cooks is still a fair zig to everyone else’s zag. With about two rounds of value, maybe it’s not that bad to just have a rock solid, bring your lunch pail kind of guy sitting in your flex spot. And who knows, maybe something can spark in 2022 with Davis Mills emerging as a viable competent NFL starting quarterback.

Adam Thielen is a great value target for teams looking to use top draft capital on RBs / QBs and/or TE. But fantasy drafters aren’t the only ones setting their gaze on potential overall #1 WR Justin Jefferson. NFL defensive coordinators are too. Thielen is giving you over two full rounds of ADP value relative to his 2021 WAR. Looking back at 2021, I can understand how he’s sort of been forgotten. Jefferson aside, Thielen finished 2021 with the following output:

But asScott Barrett detailed “prior to an ankle injury suffered in Week 13… Thielen has been a WR1 for five straight seasons when healthy.” Let recency bias work for you this year as you consider scooping up Thielen after going big early on RB, TE or QB.

Dalton Schultz is a dependable tight end option with a star quarterback in a high-octane offense. Can’t ask for much more than that from a TE going in Round 5. And with Amari Cooper out of the picture, there’s reason to believe there will be an increase in targets coming his way. Sure, not as many as CeeDee Lamb, but Schultz is still going to eat, especially in the red zone.

The most dependable fantasy TE in the history of this game is once again being drafted too late. The safety he provides to the most crap-shoot of positions along with league-winning upside can help put early Round-2 drafters in the league driver’s seat. The only significant difference Kelce’s 2022 figures to be vs 2021 is that Tyreek Hill is gone. Whatever production JuJu Smith-Schuster or Marquez Valdes-Scantling is able to offer will not match the target share of Hill. Kelce is full steam ahead in 2022 and has proven year-after-year to be the most reliable fantasy selection in the history of this game.

Stafford hit the ground running in his 2021 rookie season after spending 12 years in the minors. The chemistry he developed with Cooper Kupp is unlike anything I’ve ever seen and 2022 only looks improved with Allen Robinson escaping captivity in Chicago to offer Stafford a second WR1 option. Going off the board at 87, Stafford is returning 5 full rounds of value at his ADP — second-most only to…

Mr. Bionic defies age every year and, after spending a solid month with his family this off-season and then unretiring, it seems he’s never been more motivated to get back on the field. Russell Gage is no Antonio Brown, but he’s probably one of the best third-option wide receivers in the NFL. I don’t see the Buccaneers to be in much different shape offensively than last year. Brady should have no problem rewarding mid-round QB drafters in 2022, even if his total pass attempts regress a bit from an insane 2021.

Early this offseason, I made the case that Allen was worthy of a Round 1 selection in 2022 fantasy drafts. However, I didn’t say you’d have to actually draft him there. But at ADP 24 I think he’s a legit target for #1 overall selectors to pair with Jonathan Taylor. And if Mark Andrews somehow slips to you at #25 just tell your league to pack it up for the year. Speaking of which…

JJ Zachariason developed one of the best fantasy football predictive indicators I’ve ever heard prior to the 2021 season relating to tight ends. Breakout tight ends drafted in later rounds tend to come from teams with good QBs and no standout WR. That was basically the situation for Andrews in 2021 and he went from serviceable to the No. 1-overall TE. Well, not much has changed in Baltimore heading into 2022. Travis Kelce is rightfully being drafted ahead of Andrews in 2022 but the value at the back end of Round 2 is going to give drafters with a top-5 selection a great start to their draft party.

Herbert at the end of Round 3/early Round 4 is highway robbery. Honestly the only worry I have about 2022 vs 2021 for the Chargers is that their defense will be too much improved. Herbert will be in the mix for the overall #1 QB and having a couple stud RBs or an RB and top-TE under your belt before you click “select” on Herbert in late Round 3 should have you queuing up all the spicy memes for the group chat.

You probably weren’t expecting so many QBs on this list but that’s exactly why you needed to read it. I’m more than OK being an “Early-Round QB” guy, and as much as I love the other QBs on this list, the value and upside Hurts offers is unlike anyone on the market. Of course, Hurts’ team situation isn’t the same as 2021 – IT’S BETTER! AJ Brown comes to town to give Jalen a real #1 option to pair with his Konami prowess. Remember, Hurts was a sixth-round draft selection who played at a Round 2 value last year without Brown. I can’t imagine this ADP doesn’t correct, but as it stands now, despite how much I love Josh Allen and Justin Herbert, this is the best deal on the current market. Stockpiling other positions and saving a 5th to make sure you land Jalen might be the absolute way to go.