Hello, and welcome to the Week 4 XFP Report. If you’re unfamiliar with XFP, I’ll get to that in a little bit. 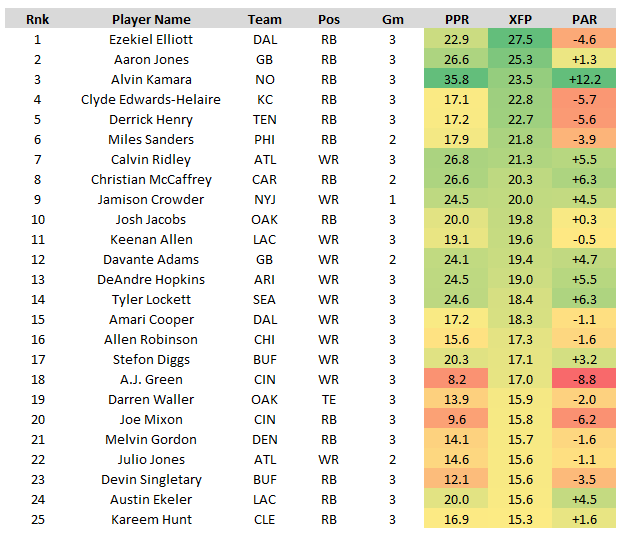 Green ranks 10th in XFP per game (17.0) and 69th in fantasy points per game (8.2). He ranks second in air yards (384), seventh in targets (28), first in end zone targets (6), third in deep targets (7), and fourth in XTD (1.95). From a volume-perspective, Green’s Week 3 was actually a little better than I anticipated. Earning 6 targets (after 9 in Week 1 and 13 in Week 2), and catching 5 for 36 yards, despite spending the near-entirety of his day shadowed by Darius Slay. I said last week, “Green feels like a terrific buy-low candidate, but you’re probably better off buying after his tough Week 3 matchup.” I still think that’s true. His volume has been terrific, and his efficiency will improve as he shakes off the rust, gets back in football shape, and works to develop better rapport with QB Joe Burrow. But at the same time, rookie WR Tee Higgins was tremendous in Week 3, turning 9 targets into 21.0 fantasy points. It’s possible Higgins is going to continue to eat into Green’s volume, but I’m still optimistic he turns things around.

Key Stat: Throughout his career, Mixon averages 17.0 FPG in victories and 12.2 FPG in losses.

Mixon’s usage has been about what we should have expected given gamescript -- Cincinnati has spent only 19% of their plays leading thus far. With Giovani Bernard stealing 34% of the snaps and out-targeting Mixon 15 to 9, Mixon is still more workhorse than bell cow. Meaning, he’ll continue to be much more productive in victories than losses. But he’s also due for a pretty serious regression, even if gamescript doesn’t improve. The usage he’s seeing -- 17.3 carries per game and 3.0 targets per game (with nearly all of the team’s near-end zone work) is good volume, worth 15.8 XFP per game (9th-most among RBs). He’s a terrific buy-low candidate (we know he’s far more talented than his -6.2-point differential implies), and perhaps this is the perfect get-right spot, favored by 3.5-points against the Jaguars.

Among TEs, Thomas ranks second in XFP per game (14.3), 4th in routes run (105), 2nd in targets (24), 3rd in end zone targets (3), and just 21st in fantasy points per game (9.1). I think it’s time we call it. After flopping in back-to-back dream matchups, Thomas is not so much a regression candidate to target, but a sub-mediocre talent and player to avoid.

Similarly, on-paper, Engram looks like a great buy-low candidate, ranking 12th in XFP per game (10.5) and… yikes… 28th in fantasy points per game (6.9). Like with Thomas, I don’t really see myself buying the dip. Injury Expert Edwin Porras warned us not to target Engram in 2020, coming off of Lisfranc surgery. He told us in May, “Lisfranc injuries reduce NFL offensive players’ on-field production by an average of 21% in the first season following surgery.”

Smith-Schuster’s concerns are two-fold: 1) His production has been a great deal better than his volume implies (+7.5), suggesting a looming regression to the mean. 2) His volume really hasn’t been great. In fact, had Diontae Johnson not suffered a concussion early in last week’s game, I wonder how much we’d be talking about Smith-Schuster. He ranks just 61st among WRs in XFP per game (9.5), while Johnson posted totals of 17.0 in Week 1, 20.3 in Week 2, and then 4.5 after exiting on the team’s first drive in the second quarter. However, reader beware -- you should know my biases.

There’s really a lot to be excited about if you’re a Robinson-owner in season-long. He ranks seventh in FPG (20.6). He’s seen 17 or more touches in three straight games. He scored 30.9 fantasy points last week, in a game the team lost 31-13. He's seen 91.5% of his team's carries out of the backfield, which ranks fifth-most. But at the same time, he ranks just 20th in XFP per game (13.5) and on just 52.7% of the team’s snaps. The key takeaway is you likely secured yourself a fantasy starter for free in season-long, but, he’s also a top regression candidate -- this level of efficiency (+7.1) isn’t sustainable.

Allen was the XFP leader in Week 3, scoring 32.7 fantasy points on a 30.0-point expectation. In total, Allen saw 19 targets (for the second time in his career) on an 8.3 aDOT, and with 3 of those targets coming in the end zone (0.82 XTD). Of course, Allen probably benefited from Mike Williams going down early with an injury, but Allen also saw tremendous usage last season, finishing top-5 in XFP per game and top-10 in fantasy points per game. Ranking 22nd by BestBall10 ADP, I think we all would have agreed he was one of the best values at the position, had we known Justin Herbert would eventually start nearly every game for the Chargers. As long as that’s the case (and I don’t see why Los Angeles would go back to Tyrod Taylor at this point, other than stabbing-related guilt), keep starting Allen as a borderline-WR1.

Davis, filling in for Christian McCaffrey, saw tremendous usage in Week 3. On 76% of the snaps, Davis earned 13 carries, 9 targets, and 3 opportunities inside the 10-yard-line. He ranked 3rd among RBs in XFP (23.6) and 10th in fantasy points scored (23.3). As a (probably) league-average talent we should continue to see around league-average efficiency, but he should continue to put up low-end RB1 numbers so long as he continues to see borderline-McCaffrey-type usage.

Injuries happen. That’s just an inevitable reality of fantasy football, and without Christian McCaffrey or Saquon Barkley on the field, Elliott is looking like the most valuable player in fantasy. And even if they were on the field, it’d at least be close. Elliott leads all RBs in Snap% (92.5%), Carry% (93.5%), and ranks behind only Alvin Kamara in Target% (21.3%). His 27.5 XFP per game leads all players, with +3.9 over the next-closest. He hasn’t been as productive as his good volume would imply (22.9), but knowing Elliott, that’s bound to change.

If Elliott isn’t the No. 1 asset in fantasy, it’s Kamara, who ranks third in XFP per game (23.5) and first in fantasy points per game (35.8, +12.9 more than Elliott). Of course, that sort of differential implies a massive regression to the mean (he’s scored 6 touchdowns on just a 2.7 touchdown expectation). But XFP is based on how many fantasy points a perfectly league-average player would score on identical volume, and Kamara is far more talented than the league-average player. In fact, he’s arguably the most fantasy-efficient RB of all-time. And, unlike last year, he’s finally healthy. Although his target volume will likely see a dip once Michael Thomas returns from injury, he’s still locked in as a top-3 fantasy RB.

Elliott and Kamara stand well ahead of the rest of the pack, but Sanders isn’t too far behind. Although not as efficient as we saw from him last year (though still far less inefficient than the rest of Philadelphia’s offense), his usage has been elite. 21.8 XFP per game, 19.0 carries per game, and 8.0 targets per game. Or, 76.8% of the snaps, 79.2% of the carries, and 21.1% of Carson Wentz’s attempts in games active. Any way you slice it, that’s elite usage. If his owners aren’t appropriately valuing him as a top-5 fantasy RB, try buying.

Calvin Ridley is looking like a potential league-winner, and maybe who you drafted Julio Jones to be. Among WRs, he ranks first in FPG (26.8), first in XFP per game (21.3), fourth in targets (33), first in air yards (560, +176 more than next-closest), second in end zone targets (5), and first in deep targets (10). Don’t be shocked if Ridley remains Atlanta’s alpha WR1 even when Julio Jones returns to full health, or, at least don’t be surprised if he remains the more productive fantasy asset. Dating back to mid-2019, Matt Ryan had already started to turn to Ridley more near the end zone. And, for whatever reason, no one talked about Jones’ fairly glaring YPRR decline this past offseason. 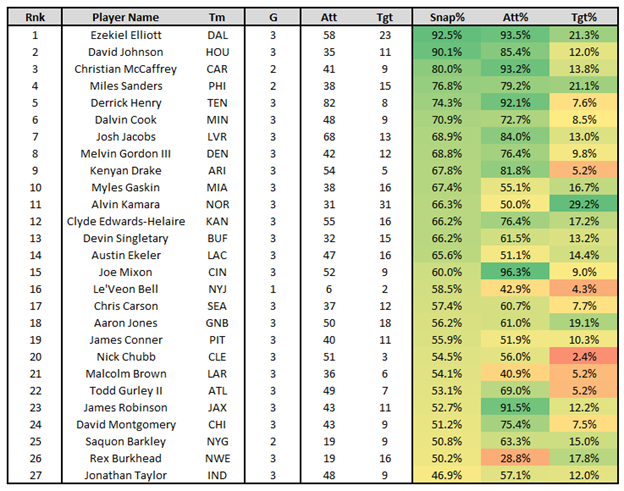