Russell Wilson and the Seahawks reached double-digit wins and the playoffs in 2019 for the seventh time in his eight seasons — they failed to make the playoffs with a 9-7 record in 2017. The Seahawks finished with a 12-6 overall record, which included a road victory over the Eagles in the Wild Card Round and a Divisional Round loss to the Packers. Russ worked his magic in one-score games last season with the Seahawks finishing with an 11-3 record in one-score contests.

Seattle finished with 8-9-1 against-the-spread mark, which included some wild home-road splits. They finished 2-6 in front of the 12th Man and 6-3-1 on the road. The Seahawks scored the ninth-most points per game (24.7) while allowing the 14th-most PPG (24.2), which resulted in a 9-8-1 mark toward over totals. The Seahawks claimed one of the Wild Card spots to reach the postseason and to cash their +135 odds to make the playoffs.

The Seahawks are getting more respect in the betting markets this summer after they outpaced their 2019 win total (8.5) by two and a half wins. Seattle topped their win total early last season with a Week 12 victory over the Eagles. Seattle’s 2020 season win total has jumped by a victory from 2019 up to nine and a half, and they’re -137 to make the playoffs. Entering training camp, I have the Seahawks power rated as the seventh-best team in the NFL (+2200 to win Super Bowl LV), as the fifth-best team in the NFC (+1100 to win the conference), and as the second-best team in the NFC West (+225 to win the division).

The combination of Russell Wilson and Pete Carroll has been a money-making machine during their eight years together. The Seahawks have gone over their season win total in five of Wilson’s eight seasons while Carroll owns a 6-3-1 record to the over in his 10 seasons in Seattle. Wilson is the best quarterback in the NFC West and he ranks right up there with any quarterback in the league. The Seahawks may have had some “luck” to go 11-3 in one-score games last season, but Wilson gives them a chance to win any and every game.

Wilson may have his best cast of skill players around him that he’s ever had in what will be his ninth season. D.K. Metcalf is an ascending second-year WR, Tyler Lockett continues to play at a high level, and he could have a dynamic tandem at TE if Greg Olsen and Will Dissly can stay healthy.

After a couple of lean years, Seattle’s secondary has the potential to be pretty strong this season too if CB Quinton Dunbar is able to avoid jail time and a suspension for an alleged armed robbery. Seattle also traded for S Quandre Diggs last season, who elevated the entire secondary and who provided a major improvement over Tedric Thompson at the end of last season.

The Seahawks have a chance to get off to a hot start this season. They’ll likely open the season as favorites in each of their first five games (@Atl, NE, Dal, @Mia, Min), and they could be favored in their first two games out of their Week 6 bye (@Ari, SF).

You won’t catch me wagering under Seattle’s win total for as long as Russell Wilson and Pete Carroll are working together at a high level, and I haven’t seen any signs of them slowing down just yet. Still, Seattle’s overall roster still has more holes in it than it once had in the Legion of Boom days. They finished with an 11-5 overall record last season, but with a lesser quarterback, they could’ve very easily been a .500 team if some of their one-score victories flipped against them.

They’re perpetually trying to figure out their O-line woes, and they’ll try again this year after adding OG B.J. Finney, OT Brandon Shell, and third-round OG Damien Lewis. No player in that group is likely to improve this O-line dramatically so Wilson will be scrambling for his life at times once again this season. Seattle has leaned heavily on its running game with Wilson in town, and the health of RBs Rashaad Penny (ACL) and Chris Carson (hip) is up in the air heading into the year. At least they added veteran RB Carlos Hyde for insurance if Carson gets out of the gates slow this season.

The Seahawks also need to get better production out of their defensive front and their pass rush, especially with free agent Jadeveon Clowney unlikely to return. They allowed the 11th-most rushing yards per game (117.3) and they averaged the seventh-fewest sacks per game (2.1) last season. The Seahawks added just DE Bruce Irvin and drafted DE Darrell Taylor in the second round to help the group.

The Seahawks have a critical six-game stretch from Week 7-12 that could decide their fate in the division and in the conference. The stretch includes four divisional games (@Ari, SF, @LAR, Ari) and two road games in which they’ll likely be underdogs (@Buf, @Phi). They also have five Eastern Time Zone games this season, four of which are the dreaded 1 p.m. kicks for Pacific Time Zone teams. 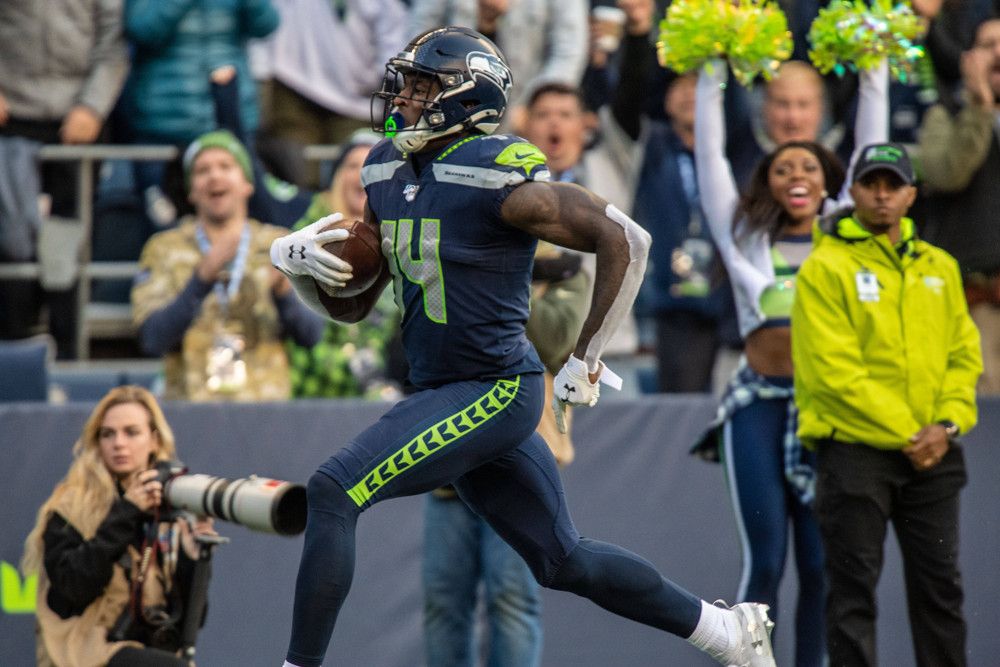 Russell Wilson led teams have reached at least nine wins in each of his first eight seasons, with seven of those teams reaching double-digit victories and the playoffs. It’s an incredible run from one of the game’s best quarterbacks, and I’m not about to start betting against Russ and Pete Carroll even in a loaded NFC West. I’m leaning toward the Seahawks over nine and a half wins at a nice +120 price, but I prefer a one-unit wager on Seattle to make the playoffs at -122. I see the Seahawks sitting in the 9-to-11 win range, and I prefer the playoff wager since I’m expecting nine wins to earn a postseason berth this year in the new 14-team format in what is an extremely balanced NFC from top to bottom.

I’m unlikely to make any wagers on the Seahawks player props unless we get some sort of indication that Seattle is looking to air it out a little more this season. There’s been some smoke that Wilson is pushing hard for the front office to sign Antonio Brown, which would certainly be enough for me to wager on Wilson’s passing total. For now, I’m leaning Wilson over 3900.5 passing yards even without AB in the fold as of late June. D.K. Metcalf has the potential to take off in his second season, Russ already has a great connection with Tyler Lockett, and they brought in Greg Olsen to bring another dimension to this passing attack alongside Will Dissly. Seattle’s backfield also has some questions with Chris Carson coming off a second major leg injury so I’m expecting Wilson to be more active as a passer than we’re used to seeing in Seattle.