The Rams might not quite be fully back to their early season ways where they opened up the first eight weeks averaging 30.6 points per game, but they are damn close. Since their Week 12 bye, L.A. has scored on exactly 50% of their possessions – which is the third-highest rate over the last month. They are certainly in the right spot to keep their success rolling, too, because this Vikings secondary is in shambles. Over their last five weeks, no defense has given up more yards per game (300.8) and passing TDs (12) than Minnesota. Matthew Stafford and Cooper Kupp are going to shred this defense no matter how this game plays out. L.A. ranks fourth in pass rate in close games, they are the second-most pass-heavy team when trailing, and they’re fifth when leading.

Minnesota continued their streak of playing in the most bizarre game possible every single week in their 17-9 win over Chicago that was really a blowout. The Vikings played down to an inferior opponent once again last week, but they’ll obviously not be afforded a similar situation here – especially given how bad their defense is.

Overall, this game is an easy green light for a potential shootout and is one of the few matchups on the slate with 55+ total points as the upside. L.A. is obviously in a prime spot with the way they play and how pass-heavy they are, but the Vikings can put up points here too. This offense is humming in the red-zone and they’ve scored a TD on 66% of their RZ possessions over the last eight weeks. In a perfect bit of yin & yang, the Rams red-zone defense has been atrocious as of late. LA is allowing their opponents to score a TD on a league-high 77% of their red-zone possessions.

How many opportunities will we have to roster a RB with a very high probability of touching the ball 30 times this season? For RBs on the main slate this week, 30 touches have been achieved on only nine occasions. Three by Dalvin Cook, two by Najee Harris, once by D’Andre Swift, and twice by Alexander Mattison. Direct your attention to the fact that, with five total 30-touch examples, the Vikings have fed their featured RBs with that number in 36% of their games this season. And Mattison took 30 touches in two-of-three starts (67%).

The potential return of Adam Thielen might help, but Justin Jefferson will need Thielen to post consistent numbers right out of the gate for Jalen Ramsey to redirect his attention. And the fact that JJets is going to be chasing history in Week 16 will almost guarantee a devoted shadow:

Justin Jefferson is on the brink of @NFL history.

On #MNF, @JJettas2 reached 2,735 career rec. yards, passing @ProFootballHOF-er @RandyMoss for 2nd most in a player's first 2 seasons in the Super Bowl era. 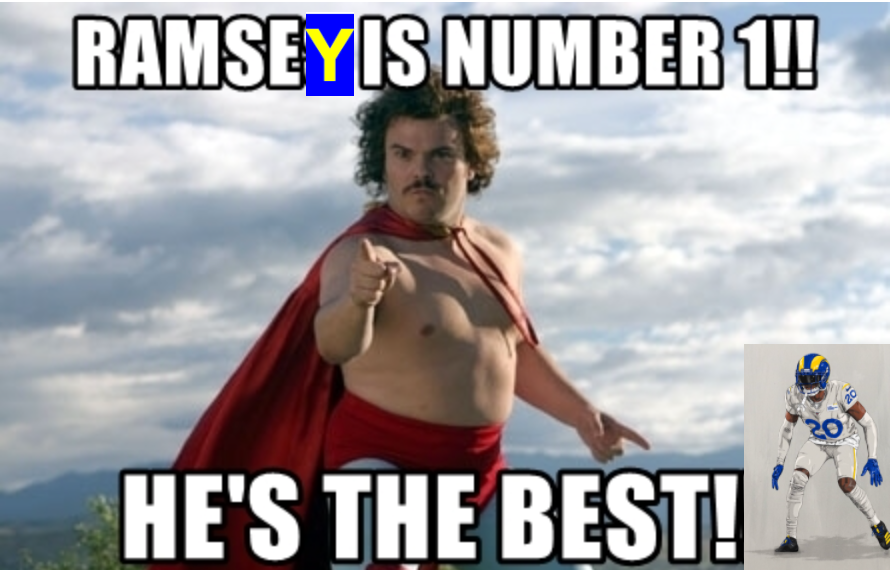 The Rams offense got another weapon last week when Darrell Henderson returned from injury and the COVID list, but Sony Michel remained the lead back.

Here’s Graham from Start/Sit on his approach in this backfield:

“With Darrell Henderson back from his thigh injury and a stint on the COVID list, we got clarity on how HC Sean McVay views his running backs. Sony Michel took control of this backfield on Tuesday and played on 73% of the snaps while Henderson was at 27%. What was especially surprising is how little Henderson played on passing downs. Michel ran 25 routes while Henderson ran just eight. If Henderson has lost the early-down work and passing down snaps to Michel… what does he have left? Michel is running inspired and physically and has clearly carved out the “1A” role in this backfield. Even in this likely high scoring game, Henderson is nothing more than a hail mary FLEX option.”

Anyway… how about this wrinkle?

I seriously doubt Cam Akers (Achilles) will be ready to play before the end of the regular season, but he gives the Rams some potential options during the playoffs, and some hope to those who have him in keeper/dynasty formats.

Here’s some advice on this Ram passing game — START ‘EM! Matthew Stafford, Cooper Kupp… and everyone else.

“Both OBJ and Jefferson flopped on Tuesday while Cooper Kupp (shocker!) dominated once again. However, I’m going back to both Odell Beckham and Van Jefferson as strong WR3 starts here in a likely high-scoring affair with the Vikings. Both Beckham and Jefferson were full-time players last week as the Rams continue using 3-WR sets exclusively as their base offense. While they didn’t get many targets in what ended up being a very methodical, slow-paced game against Seattle last week – playing against the much higher scoring Vikings should provide a longer runway for success. Especially since Minnesota is giving up a whopping 41.6 FPG to opposing WRs over the last five weeks, which is a league-high. This secondary has allowed 10 (!!) different receivers to get over 60 yards against them in this span.”

The Rams did activate TE Tyler Higbee off the COVID list, by the way. He’s a back-end TE1.

The Vikings are the Vikings. The only differences this week is RB Dalvin Cook (COVID — unvaccinated) is out and will be replaced by Alexander Mattison, who is off the COVID list. Mattison has been a slam-dunk RB1 when Cook misses in his career.

Moreover, it looks like Minnesota could be getting WR Adam Thielen (ankle) back this week, alongside Justin Jefferson. That would be welcome news. If Thielen plays, I consider him a TD-dependent WR3 on the likelihood he isn’t 100%.

Mike Zimmer said Adam Thielen was "close" to being able to play vs. Chicago. Team is doing a walk thru today so he won't be going through a normal practice but it sounds like he'll be ready for the Rams game.

Jefferson, meanwhile, has his hands full with CB Jalen Ramsey. You’re obviously still starting him, but it’ll be a battle to watch.

Justin Jefferson said he's had the Rams game circled for a while because he wants to go against Jalen Ramsey. He called it a "statement game" and a chance to "solidify myself" as a top receiver by playing well against Ramsey.