Hopefully by now, you’ve already read my recent tome, “Upside Wins Championships,” and have come to the conclusion that that title implies. Today’s article will be a less-philosophical, more-actionable accompaniment to that piece, and the third part of a larger series in which we highlight a number of players who have massive (ideally league-winning) upside and who have underrated upside relative to ADP. Today’s article will focus on the wide receiver position.

Notes: We’ll be steering clear of the top-20 wide receivers (by ADP), as their upside should already be fully apparent.

That 2019 season looks rough, but, like with Thomas’ 2020 season, it’s really just a total injury outlier of a year. Thielen was averaging 17.3 fantasy points per four quarters (would have ranked 7th-best), before suffering a hamstring injury on his ninth snap of the game in Week 6. He’d spend the remainder of the season inactive battling that injury, or playing part-time and only as a decoy.

In any case, Thielen has easy WR1 upside. How do I know this? Because he’s hit that mark in three of his last three healthy seasons. And now he has Justin Jefferson drawing CB1s in shadow coverage, leaving him in the more advantageous matchup. So, he not only has underrated upside, but he’s a virtual lock to beat his ADP by about 10 spots should he stay healthy.

Johnson was one of my “circle your draft sheet” players heading into 2020. He finished 21st in FPG (14.9) at an ADP of WR37, so that might seem like a win. But it felt like a massive disappointment to everyone who rostered him. Really, we just got incredibly unlucky with fluky injuries suffered in the first half of four games.

Due entirely to injury, Johnson fell under 50% of the team's snaps in Weeks 3, 5, and 14. He played on 76% of the team's snaps in Week 8 but clearly wasn't quite right after spending some time in the medical tent with an injury suffered in the first quarter. Including the postseason, but excluding those four games, Johnson saw double-digit targets in 11 of 12 games, with the lone exception being Week 17, the one game QB Ben Roethlisberger didn't play. Over this span, Johnson averaged 12.3 targets, 83.0 yards, 19.6 XFP, and 19.4 FPG. If extrapolated over the full season, those numbers would have ranked best (1.7 more than next-closest), 8th-, 2nd-, and 4th-best among wide receivers.

In other words, after a rudimentary injury adjustment, it’s clear Johnson is a glaring value mispriced by multiple rounds, and perhaps he only needs to stay healthy to reach his WR1-upside.

Simply, Jeudy is really freaking good. He gets open at will. Every video of him running a route in practice ends with the opposing cornerback pants-down and sobbing. With Teddy Bridgewater (who supported three top-25 WRs last year) serving as the safety net if Drew Lock stinks it up in camp or at any time during the season, there’s no way QB play is anywhere near as bad as it was last year. Jeudy has easy top-12 upside, because he’s already a top-12 WR in the NFL. (Don’t @ me.)

Saddled with a bottom-3 defense, the Texans will be forced to throw early and often. But they don’t really have anyone to throw to besides Cooks. And so, he’s a massive, screaming value at ADP, even if Deshaun Watson doesn’t play a down this year. And if he does play close to a full season (admittedly highly unlikely), Cooks has easy WR1 upside. Granted, he feels more like a “safety play” than an “upside play,” but just on projected target volume alone, he has more upside than just about anyone at his current ADP.

Now, I know what you’re thinking -- “I’m not falling for this again.” But this is actually the first time I’ve ever actually recommended taking Williams.

Ideally, Williams will benefit from the best QB play of his career — sophomore QB Justin Herbert ranks 6th by ADP and 9th by MVP odds. It’s hard to imagine Herbert justifies those odds without supporting multiple receivers as fantasy mainstays. And he should see the best target volume of his career, with Hunter Henry leaving behind 93 targets, and OC Joe Lombardi promising he’ll be a focal point (rather than the afterthought he’s long been) of the offense. Lombardi said in June, “As much as this offense will resemble New Orleans, [Williams] plays the ‘X’ and the ball has always kind of found the ‘X’ receiver in this offense. I think that there will be some natural production that comes his way because of the nature of the offense… I see a big role for him. If I were a betting man, I’d bet on nice numbers coming from him on the stat sheet, that’s for sure.”

And it’s weird to make this argument for a non-RB, but Williams actually has potentially league-winning upside should Keenan Allen suffer an injury. Since 2018, there are four games in which Allen sat out or played on fewer than 35% of the team’s snaps. Williams hit at least seven targets in all four games (averaging 8.5) and 22.5 fantasy points in three of four games (averaging 21.7).

Elijah Moore is “my guy.” He’s been “my guy” since the first-pass of my WR model, where he ultimately finished third-best in the class and 10th-best since 2015. Quite frankly, he’s a future superstar and a likely PPR cheat code the second he steps onto an NFL field.

Backing this up are a number of beat reports heralding Moore as the second-coming of Antonio Brown. Here are some good ones from Connor Hughes of The Athletic:

1) “Rookie wide receiver Elijah Moore was the most impressive player — offense or defense, any age — whenever he was on the field… Just when you thought you’d seen all Moore could do … he’d do something else. It’s not just speed and route-running, though. Moore attacks the ball like few receivers the Jets have had, and when the ball hits his hands, he catches it. This isn’t written lightly: The Jets might have someone really, really special… “

2) “It’s getting exhausting writing about Moore because what else is there to say? He’s making plays in the slot and split wide. He’s getting open deep and short. He’s virtually uncoverable near the goal line. Every day he does something else that makes you turn your head… He’s been the most impressive player at OTAs (on either side of the ball) and it’s not really close.”

Moore is already the most-talented receiver on the Jets, and, I think, by a wide margin. He’s probably already Zach Wilson’s most-trusted receiver, and, at the very least, they’re already showing bromance levels of rapport. (Moore has easily been Wilson’s favorite and most-effective weapon in minicamp, they talk every day and send each other their highlights to study, they go on cute Italian dinner bro-dates, and Wilson is always giving us heartwarming quotes like this about Moore.) Jamison Crowder’s return is a non-factor — the Jets had a top-24 grade on Moore and HC Robert Saleh has said multiple times that he can play all three WR positions. Thanks to a bottom-five defense, and a bottom-three running back room, look for the Jets to throw early and often, and for Moore — who averaged 10.8 receptions per game last year — to reap all the rewards of their defensive ineptitude.

Ja’Marr Chase and DeVonta Smith are absolute studs, don’t get me wrong, but I also didn’t think Moore is very far behind them at all. And, yet, Chase is going eight rounds earlier and Smith is going six rounds earlier by ADP. I think that’s a pretty big and exploitable mistake. 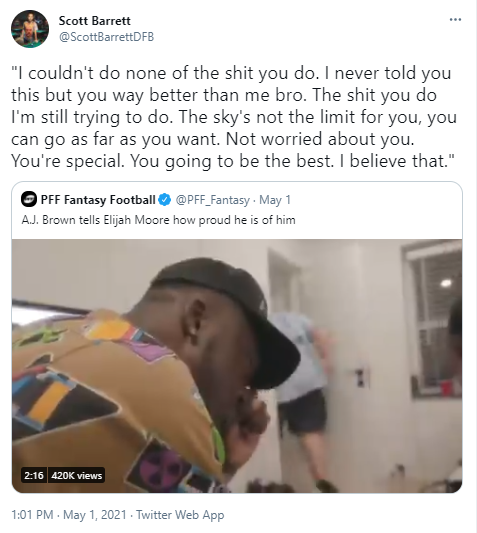 Meyers is a major touchdown-regression candidate — he averaged 7.3 targets and 65.6 YPG from Week 7 on in 2020, but scored zero touchdowns all year. He also benefits from the fifth most-improved strength of schedule this season. And should, hopefully, benefit from improved QB play, with Mac Jones serving as the safety net should Cam Newton struggle once again.

Hunter Henry and Jonnu Smith were given $12.5 million per year by the Patriots this offseason, which ranks third-most at the position. They made Nelson Agholor the 22nd-highest-paid wide receiver in the league, and also added Kendrick Bourne to a three-year, $8.5 million deal (only $1.0 million guaranteed). But I’d bet on Meyers leading the team in targets this year. And Patriots Insider Tom Curran might agree, saying, “Even with the additions of Bourne and Agholor, I’d still put my cash on Meyers being the most reliable and productive Patriots wideout in 2021.”

Why? Because Meyers has been given WR1 treatment in minicamp, and was quietly phenomenal last year after replacing Julian Edelman. He was deemed “open” on 86% of his targets, per PFF charters, which ranked 2nd-best of 77-qualifying WRs. He finished the season 12th in YPRR (2.24) and 25th in PFF grade, and, absurdly, ranked second-best in yardage share (38.9%) from Week 7 on. 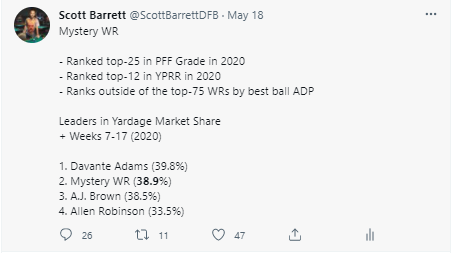 Last season Meyers saw 47% of his targets from the slot, well ahead of Bourne (39%) and Agholor (25%). And that’s a key point: make sure to keep a close eye on who is getting the majority of reps in the slot this preseason, as HC Bill Belichick’s starting slot WR has been a borderline fantasy cheat code, and a focal point of the offense, for over two decades now. 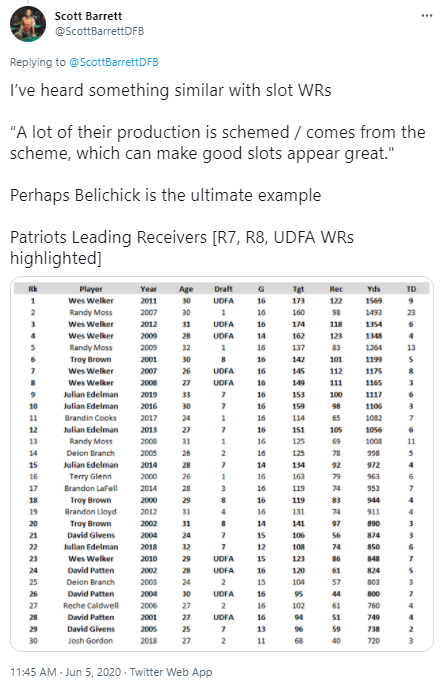 Note: I do have a decent amount of exposure to Nelson Agholor (ADP: WR65), but only because I’m worried I might be wrong on Meyers. And that, instead, Agholor is the team’s No. 1 and/or starting slot wide receiver (he was a starting slot WR up until last season). At their respective pricing, this bet-hedging strategy should be affordable enough to be worthwhile.