Hello, and welcome to the Week 9 XFP Report. If you’re unfamiliar with XFP, I’ll get to that in a little bit.

Through 8 weeks of action, here are the top-25 players in expected fantasy points (XFP) per game: 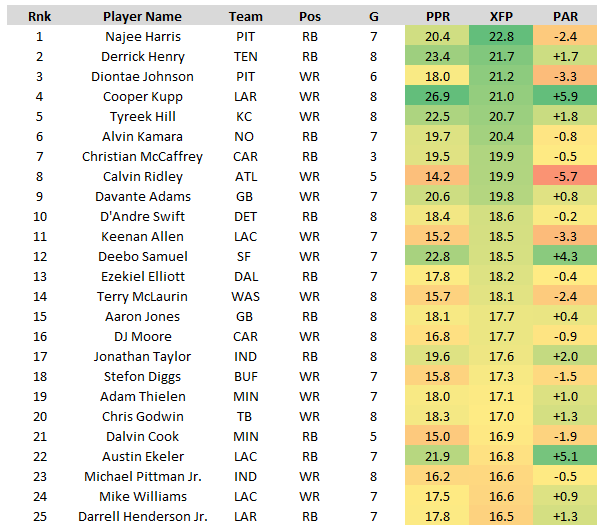 Looking at Carter’s numbers over this (admittedly small) two-game sample — 57.0 rushing YPG, 8.5 receptions per game, 81.0 receiving YPG, 138.0 YFS per game — he appears indistinguishable from some of the league’s best dual-threat running backs. Does Carter have D’Andre Swift, Austin Ekeler (the great Danny Kelly comp’d Carter to Ekeler during the pre-draft process), or maybe even Christian McCaffrey-levels of upside? Which is to say, might he continue to rank among the highest-end RB1s, who put up WR3-levels of fantasy production as a receiver, while also adding 6-10 FPG on the ground?

I’m not sure what happens when Zach Wilson returns to full health, but I’m fully buying into this notion for however long Mike White remains the starter. White has targeted Carter on a whopping 29% of his throws, well above the next-closest Jets receiver (Jamison Crowder, 16%). And, for perspective, Davante Adams currently leads all players in target share with 32%.

That sort of pass-game usage is massive from a fantasy-perspective. Remember, for running backs in PPR leagues, a target is worth 2.64 times as much as a carry (and 3.13 times as much outside of the red zone). More importantly for Carter (on the lowly Jets), this also means he’s mostly immune (and, actually, may even benefit from) negative gamescript.

Even in this week’s tough matchup against the Colts, I’ll be starting Carter with confidence as a high-end RB2.

Something interesting is happening with Taylor that seems to be flying a bit under the radar.

If you can’t yet tell what I’m hinting at, it’s this: I think Taylor is finally a bell cow. Or at least, we’re trending in that direction.

Since Week 4, Taylor leads all RBs in FPG, averaging 22.3. And he gets the Jets this week, who have given up a league-high 37.6 FPG to opposing RBs. He’s probably my No. 1 trade target this week, and potentially, my overall-RB1 on the week.

After a lackluster rookie campaign, Pittman appears to be a picture-perfect representation of a sophomore breakout; one of the most important and long-standing (potentially league-winning) archetypes in the game of fantasy football. But I don’t think we should be surprised, afterall, this was a player HC Frank Reich thought was actually the best wide receiver from his stacked class.

Interestingly, he also ranks 6th among all WRs in XTD per game (0.61), while RB Jonathan Taylor leads all players at all positions with 1.0. So, just note, both players have immense touchdown-upside, and potentially DFS slate-busting upside. Given their salaries (RB4 and WR20 on DraftKings) and Indianapolis’ 28.5-point implied point total (4th-most), I’d want either one of Taylor or Pittman on the bulk of my Thursday-Monday GPP lineups.

Through the first eight weeks of the season, Kupp has scored 215.4 fantasy points as a receiver, the most by any player all-time. He leads all players in FPG (26.9) and ranks behind only Diontae Johnson (among WRs) in XFP per game (21.0).

There’s not really much else to say here. I see no reason why we shouldn’t be viewing Kupp as a slightly richer man’s 2020 Davante Adams. Better yet, with fantasy football’s No. 1 power law player (Derrick Henry) now possibly out for the year, Kupp easily appears to be the most valuable player in fantasy football. I wouldn’t be surprised if something like 40% of all Kupp-owners (in ESPN leagues) made it to their league’s championship game.

Impressively, Kupp scored 24.5 fantasy points on a (season-low) 16.0-point expectation last week. Interestingly, this was actually a brutal matchup. Kupp runs 68% of his routes from the slot, and the Texans came into last week ranking 6th-best in FPG allowed to opposing slot WRs (10.3), but 11th-worst against outside WRs (24.2). And, still, Kupp found the end zone and led the team in targets (9), catches (7), and yards (115). This week, he gets a Titans defense that ranks dead-last in FPG allowed to opposing slot WRs (23.3, 1.78X the league-average rate).

Kupp has stolen the show, and hogged the limelight, but Samuel’s 2021 season has been similarly historically impressive. His 819 receiving yards through seven games is the 7th-most by any player since the 1970 NFL merger.

And this doesn’t feel too flukey. Samuel’s production isn’t too much better than his volume, and he’s hit 50 receiving yards and double-digit fantasy points in every game thus far.

One of the most long-standing narratives in fantasy football has been “Kyle Shanahan force-feeds his WR1.” Or that “Shanahan’s WR1 is a yearly must-draft for fantasy.” This wasn’t true throughout most of Shanahan’s San Francisco tenure (with, perhaps, TE George Kittle serving as the WR1), but it was true Andre Johnson (171 targets in 2008 and 2009), Santana Moss (145 targets in 2010), Pierre Garcon (181 targets in 2013), Julio Jones (203 targets in 2015), and even last year for Brandon Aiyuk when Samuel and Kittle were dealing with injuries.

We’ll have Samuel ranked top-5 this week, but I’m not positive the wheels don’t eventually fall off. Kittle is due back any week now. If Trey Lance eventually takes over as the starter, he might not favor Samuel as much as Jimmy Garroppolo. And Brandon Aiyuk may finally be out of the doghouse. He saw season-highs in targets (7) and route share (96%), and Shanahan (after two months of weekly roastings) told reporters he thought Aiyuk had his best game of the season last week.

Brown was fairly productive in his last game (Week 7, before the bye), scoring 19.0 fantasy points, but his performance should have been quite a bit better than that. He led all players at all positions in XFP, totaling 27.3 on the back of 14 targets, 313 air yards, 1 end zone target, and 6 deep targets. Brown’s 313 air yards, 233 unrealized air yards, and 6 deep targets were the most by any player in any week this season.

And this sort of (elite deep threat) usage hints at Brown’s week-winning / slate-busting upside in games Baltimore is trailing by multiple scores, in desperate need of a big explosive play to get back in the game. That typically doesn’t happen too often — Baltimore leads all teams in point differential since 2019, with +127 (41%) more than the next-closest team — but could happen again in your fantasy championship (Week 17) when the Ravens face off against the Rams.

And, in Brown’s defense, this was a fairly tough matchup. Cincinnati came into Week 7 ranking 4th-best in FPG allowed to opposing WRs on deep passes (4.7 FPG).

But, yes, Brown is an extremely valuable fantasy commodity. If he’s not being viewed as a high-end WR2 at-worst, he needs to be. And, of course, at age 24, his dynasty ADP still makes absolutely zero sense (ADP: WR36).

Jakobi Meyers ranks 20th in targets per game (8.9), 25th in XFP per game (14.8), and 50th in FPG (11.0). Though, he’d rank 36th in FPG (12.8) if he were perfectly average in touchdown efficiency/luck. He’s fallen 2.4 touchdowns (2nd-most) and 30.6 fantasy points short (2nd-most) of his volume-based expectation… Meyers averages just 9.0 FPG over his last four games, though 16.7 in the two games immediately prior to this down-stretch, and I think schedule-variance is mostly to blame. This week’s game against Carolina will mark his fifth straight game against a team ranking top-10 in FPG allowed to opposing slot WRs.

Dallas Goedert has hit 70 receiving yards in back-to-back games following the departure of Zach Ertz. Over this span, he’s seen a 20% target share on an 86% route share. If over the full season, those numbers would rank 5th- and 2nd-best among all TEs.

Najee Harris leads all players in XFP per game (22.8), and ranks 3rd in FPG since Week 2 (22.8), hitting at least 19.0 fantasy points in 6 of 6 games. He’s also on pace for 311 carries and 119 targets, and would join Marshall Faulk, LaDainian Tomlinson, Steven Jackson, and Le’Veon Bell as the only players to accomplish this feat. He’s an easy top-3 fantasy running back throughout the remainder of the season.

Tyler Lockett saw 13 targets on just 24 routes in Week 8 (54%). He caught 12 of those 13 targets for 142 yards. Lockett averaged just 6.6 FPG over his last five games, but 28.0 FPG over his other three games. Perhaps this is a sign Lockett is back to full health. After the injury he suffered in Week 3, we warned exactly of this; that Lockett appeared to have suffered a serious injury, and he has a long history of playing through injury but not playing particularly well while injured. 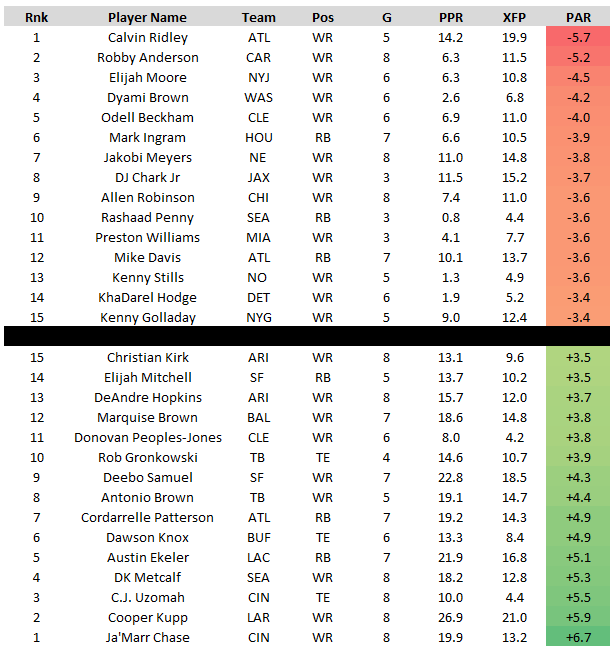