It is really hard to beat Vegas and the other NFL sportsbooks. In NFL gambling circles, you’re considered either incredibly lucky or tremendously bright if you manage to win on even 55% of your bets (just barely better than a coin flip) over a large enough sample. With millions of dollars at stake, Vegas is incentivized to make the sharpest lines possible, and for the most part, they’re extremely successful at doing so. For this reason, each offseason, I try to spend some time looking at betting lines and trying to determine what these lines might mean for fantasy.

Today, we’re going to look at DraftKings Sportsbook’s 2021 projected win totals in contrast to that team’s actual 2020 win totals. We are then going to try to determine what this might mean for the top fantasy players on the teams projected to improve the most or least. Our most recent article looking at the most and least gamescript-dependent players in fantasy will help aid in our analysis. 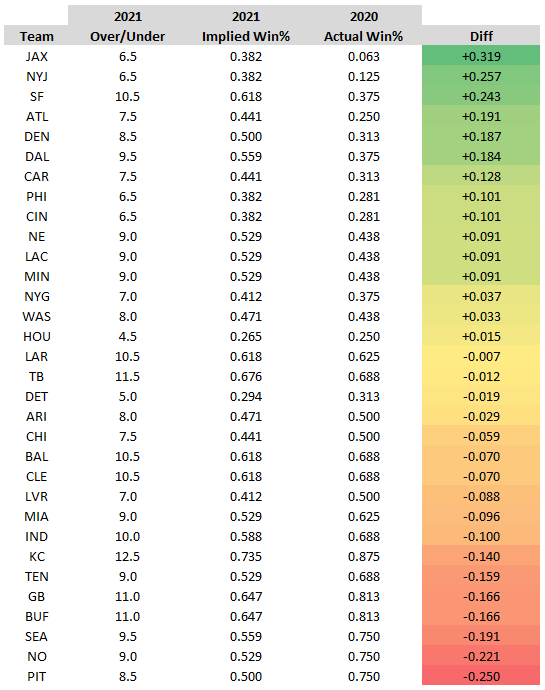 In our last article, we looked at the fantasy splits of various players by whether their team was trailing or leading. We noted that running backs tended to score a higher percentage of their fantasy points when leading, while the opposite was true for quarterbacks, wide receivers, and tight ends.

Over the past five seasons, winning teams average 18.7 FPG at the quarterback position. Losing teams average 14.3. However, over the same span, teams trailed on 45% of their offensive plays, but 51% of all quarterback scoring occurred while trailing. Teams led on 33% of their offensive plays, but only 30% of quarterback scoring occurred while leading. These splits were nearly identical for wide receivers and tight ends.

This may seem contradictory and counterintuitive, but really, this has to do with a few different factors:

So, while winning teams score more fantasy points at the quarterback position on average, it can also be true that most quarterbacks are more productive when trailing. Wide receivers and tight ends also average more fantasy points when victorious and are more productive when trailing. This is not true for most running backs, however.

With these factors in mind, here are my top fantasy takeaways for the teams projected to climb or fall the most in wins next season.

I suppose this would be amazing news for James Robinson had the team not drafted another running back in Round 1. Despite massive amounts of negative gamescript last year, Robinson ranked third in touches per game (20.6), behind only Dalvin Cook and Derrick Henry. But now, with Travis Etienne serving in the scatback-plus or sort of RB/WR hybrid-role, things are murky. I’m guessing Etienne outscores Robinson this year, though Robinson probably out-touches Etienne. With so little clarity at this point in the offseason, I’m avoiding both running backs in start/sit redraft leagues until further notice.

After winning just two games last year, the Jets are expected to win 6.5 in 2021. What was the catalyst behind this jump? Was it swapping out Sam Darnold for Zach Wilson? Or could it be because Adam Gase is no longer with the team? Maybe it’s just natural variance and the general law of parity within the NFL — it’s hard to project fewer than 6.5 wins for any team, as evident by the fact that only two teams rank below the Jets in expected Win% this year (Detroit and Houston).

And I think this makes Raheem Mostert highly intriguing. Or, at least, more interesting than current ADP implies (ADP: RB39). Remarkably, Mostert ranks second-best all-time in career YPC average (5.64), in between Hall-of-Famer Marion Motley (5.70) and all-time legend Bo Jackson (5.40). Including the postseason, Mostert averaged 20.0 FPG over his final 8 games in 2019. In 2020, before his first of two I.R. designations of the season, Mostert was averaging 22.7 fantasy points per four quarters. This (projected) massive improvement in gamescript would be a major boon to his fantasy potential. (With 89% of his career touches coming on the ground, he’s going to be more gamescript dependent than your typical RB.)

But, at the same time, I wouldn’t be shocked if Round 3 rookie Trey Sermon (ADP: RB29) supplants Mostert at some point in the season. Kyle Shanahan RBs are tricky and tough to trust, given his usual shenanigans (known colloquially as Shanahanigans since the late 1990s when his father was coaching the Broncos) and clear predilection for a shared backfield, but there’s still a lot of upside here. Anyone else remember when Alfred Morris posted a 335/1613/13 line as a runner in his rookie season under Shanahan?

After winning only four games in 2020, Cincinnati is expected to win 6.5 this year.

On paper, that’s good news for RB Joe Mixon, who averages 11.9 more FPG in victories (25.2 FPG) than losses (13.3) over the past three seasons. But, actually, I’m not sure it matters. The reason why he was so gamescript dependent is now removed from the offense — Giovani Bernard serving as the team’s scatback. And all evidence points to Mixon being a full-on bell cow in 2021.

OC Brian Callahan told reporters in May, “I don’t want Joe to leave the field, personally, and I think he’s up to that challenge … Joe shouldn’t come off the field, he should be on the field every down. He’s aware of that.” Per ESPN beat writer Ben Baby (that’s a real name), Mixon has been lining up “at different WR spots” during training camp.

I don’t know why it’s taken so long, but it looks like Mixon will finally be a bell cow. And with Samaje Perine and Round 6 RB Chris Evans as his only competition, I’d say the sky’s the limit for Mixon in 2021. At the very least, he’s a smash-value at current ADP (RB13). Remember, Mixon was an elite receiver in college, and was compared favorably to Matt Forte coming out (by PFF.)

After winning 12 games a season ago, the Seahawks are projected to win only 9.5 games in 2021. And, well, that could be excellent news for Russell Wilson.

The big question with Wilson is, as always, whether or not HC Pete Carroll will “let him cook”. Wilson has ranked top-5 in fantasy points per dropback in six of nine seasons, but outside of the top-20 QBs in dropbacks per game in six of nine seasons as well. Through his first eight games of the 2020 season, Wilson totaled 236.1 fantasy points (29.5 FPG) which is the second-most by any QB through his first 8 games of a season all-time. Uncoincidentally, over this span, Seattle ranked as the league’s most pass-heavy team over expectation (+9.2%). Throughout the remainder of the season, that dropped dramatically (+1.0%), as did Wilson’s FPG average (17.1 FPG).

If Vegas is projecting the increase of negative gamescripts and the win totoal decline to come in tandem with a decline in defensive success, that could give Carroll no other choice but to let Wilson cook. During the Wilson era, Seattle has only once finished with fewer than 10 wins. In that season (2017), Wilson led the position in fantasy points (averaging 21.8), passing touchdowns (34), and total dropbacks (655).

No team is projected to take a bigger step back this year than the Steelers, falling to 8.5 projected wins after winning 12 a season ago.

Pittsburgh has ranked top-7 in Pass% over expectation in each of Roethlisberger’s last four healthy seasons. And in the one season over that span that the Steelers had only single-digit wins (2018), Roethlisberger led the league in pass attempts (675) and passing yards (5,129). Of the pass-catchers, WR Diontae Johnson is by far the most intriguing to me. Last season (including the postseason), Johnson averaged 11.5 targets, 77.1 receiving yards, and 18.1 FPG in games he played on at least 50% of the team's snaps. For perspective, if over the full season, those numbers would have ranked best, 12th-best, and fifth-best.

This change in Win% would be bad news for Round 1 rookie RB Najee Harris as well. As illustrated at the top of this article, running backs perform much better for fantasy in wins than losses. But this can also at least be partially (if not wholly) offset by an increase in pass volume. Remember, a target is worth 2.73 times as much as a carry for fantasy running backs. Pittsburgh also had the league’s second-worst run blocking offensive line last year (per PFF). That’s another concern for Harris. So, yes, so much of Harris’ ADP (RB18) rides on his pass-catching usage and him being a gamescript-proof bell cow rather than a gamescript-dependent workhorse. But I do think he’s going to be heavily involved in the passing game, and that he’s an immense value at ADP. As I illustrated here, that’s exactly why Pittsburgh drafted him; to be their Le’Veon Bell-esque bell cow. 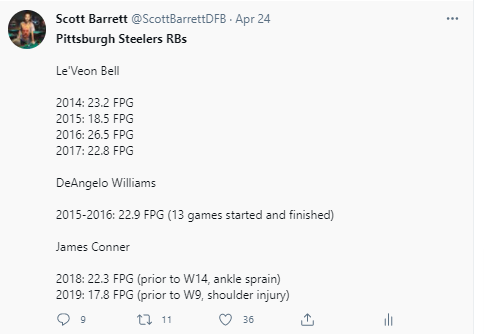 Green Bay Packers (Off The Board)

Earlier in the offseason, the Packers were projected to win 11.0 games this year (third-most). But now that bet is fully off the board. If Aaron Rodgers sits out the full year, that would cost Green Bay about 4.5 wins off their projection, dropping them to 6.5, or third-worst overall. That’s a massive swing, and would severely hinder all ancillary pieces. I don’t know exactly what the odds of this happening are, but I’d bet it’s a lot higher than people realize (see tweet below), and that — whatever those odds are — it’s not currently being factored into the ADP of Davante Adams (ADP: WR1), Aaron Jones (RB9), A.J. Dillon (RB33), and Robert Tonyan (TE10). 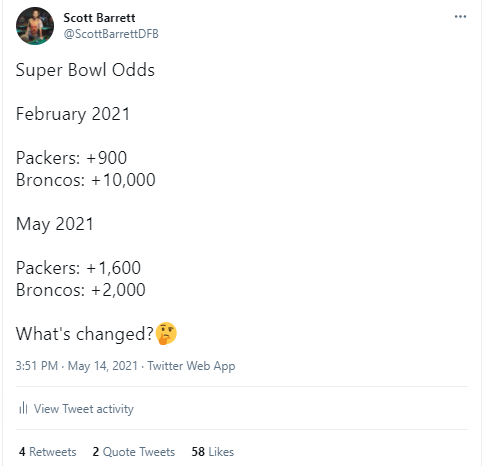