Are you ready to dive into the 2021 Scott Fish Bowl, #SFB11? Not yet, you’re not. The popular multi-league event begins July 5, and if you secured a coveted spot you won’t want to squander your chance for glory. The rules are wildly different from conventional fantasy football and I’ve adapted my fantasy football WAR model for comparing players across positions to the Fish Bowl rules for 2020. On top of that, I compared 2020 results with 2021 Fish Bowl ADP to find which positions/players are likely to bring value allowing you to contend not only for your league title, but the tournament as well.

We’ll start by reviewing who the best players in last year’s Fish Bowl were. Listed below are the full scoring rules from last year.

Most noteworthy, #SFBX was TE premium and Superflex… with the craziest QB rules package we’ve ever seen. 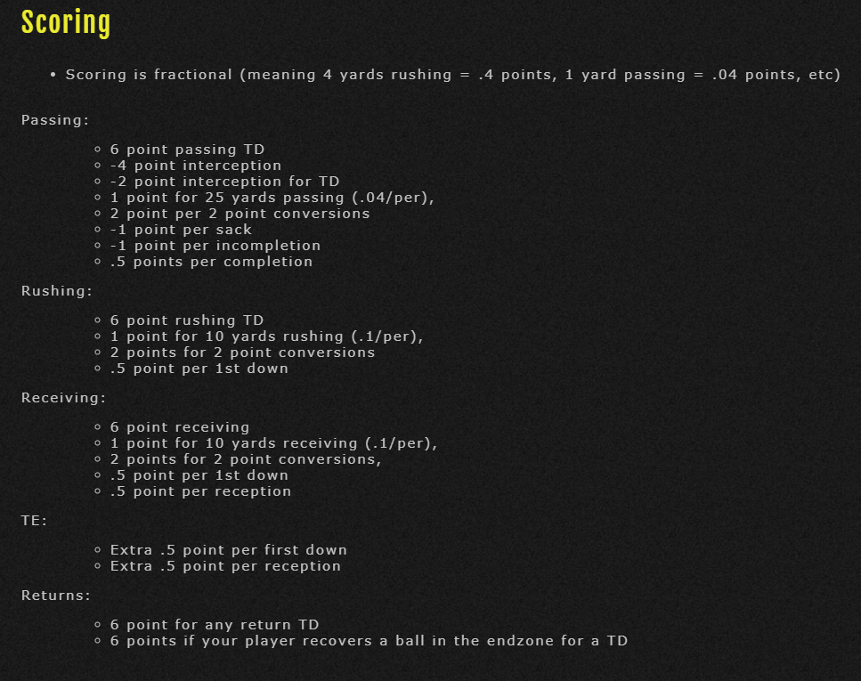 After adapting the WAR model to meet these rules, here is how each of the top-100 players shape out in WAR in the 2020 Fish Bowl.

Quarterbacks ruled the day. Not only is the league a Superflex format, but there were major penalties including -4 per INT, and another -2 for pick sixes, -1 per sack, and — holy hell — -1 for EACH incompletion. If you want a format that best mimics the real NFL and prioritizes the QB in much the same way, the Scott Fish Bowl is your model. The harsh penalties provide the disparate impact that lesser-than QBs can make on an NFL team, and make it that much more important to snag a top-end signal caller early in your Fish Bowl draft.

The following graph further illustrates the point. The humps (or distributions) for each position represent the number of top-performing players by WAR. For example, the higher humps between 0-1 for TE, RB, and WR tell us that many of the top players provided fantasy teams with 0-1 WAR. Meanwhile, the flat red QB distribution barely curves at all and produces the highest WAR for top-players. 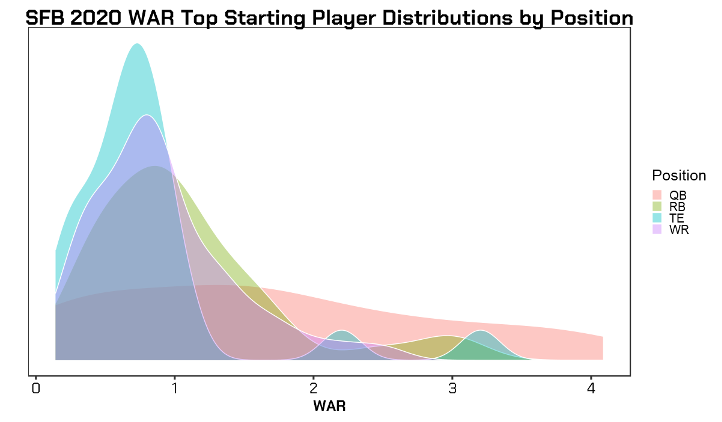 The lack of any large QB hump demonstrates that there is no safety net at the QB position. Every time a team takes a QB ahead of you – presuming they are selected in order of production – the expected WAR from the next man up declines.

However, it doesn’t often work that way, does it? One potential con to using high draft capital on QB in standard drafts is that the top performers for a season are hard to predict. Touchdown passes and TD/Pass rates are highly random and weigh heavily in conventional scoring formats. But as described, the Fish Bowl rules are much more detailed allowing for more predictability in the position, focusing on more “stable” stats. You should have confidence in top-billed names with a history of real football success.

The RB and WR dynamic is much more equitable in the Fish Bowl than conventional scoring overall, but the top-end RBs still get the nod over the top-end WRs. With Christian McCaffrey projected as the first back to go, the data suggests waiting until the first tier of QBs are selected and one other player before taking the unanimous number one back in the game.

This segues to TE. The same “great or late” draft approach you hear in conventional drafts played out in 2020. TE scoring was boosted by tacking on an extra .5 points per catch and another .5 per first down in an effort to make the position stack up a little better (known in the industry as “TE Premium”). Travis Kelce, of course, led the pack with his production suggesting he should have gone off the board as pick #7. This is a slight decline from conventional settings in which he sneaks into the top-5, but he still offered more value than any RB in the 2020 Fish Bowl.

Now that you have a read for how the Fish Bowl played out in 2020, it’s time to adapt to 2021 for #SFB11. All of the rules are the same with the one major exception: kickers have been invited to the party.

But here’s the thing — you actually don’t have to start a kicker, but you can start as many as four as flex spots. Here’s the scoring breakdown for kicking:

Unfortunately, the WAR model is unable to accurately fit kickers under these wacky settings. WAR uses ESPN player weekly start percentages as the bedrock of determining which players are presumed starters in a given week for conventional leagues that require one (and only one) kicker and not allowing them to be used as a flex.

Instead of WAR, we’ll start by getting a feel of what to expect out of kickers from a traditional FPG angle under Fish Bowl settings, and then compare that to FPG for other flex options (mainly WR/RB).

As any fantasy sleuth knows, kickers are absolute chaos in terms of predictability. Just because Younghoe Koo put up 11.26 FPG in 2020 means very little for his 2021 campaign. History says he’ll likely regress back to the average of kickers - which was about 7.5 PPG. But that doesn’t mean you shouldn’t take a stab on kickers to boost your flex options. The WAR model estimated the 12 best presumed league flex options across each week of 2020 (RB/WR/TE) averaged 10.9 PPG. For second-order flex (next top 12 started): 10.2 PPG, and third-order flex: 9.1. Five kickers in 2020 were capable of earning a third-flex spot in 2020 so there’s good reason to take a stab on a few kickers as a flyer to see if they pan out.

But remember, you don’t need to target Harrison Butker, Justin Tucker, or Younghoe Koo to gain the edge. History tells us that you can merely INSERT ANY KICKER HERE and INSERT SOME OTHER KICKERS HERE. If we believe in history, it’s almost impossible to tell which ones will be great. So feel free to snag a few options late to see who pans out and finds themselves worthy of a flex start.

Thanks to The FF Engineer, comparing 2020 Fish Bowl WAR results to 2021 ADP is now possible. The chart below provides each player currently being drafted in the first five rounds of Fish Bowl mocks. The right-most “Difference” column shows the number of draft selections each player is being mocked vs. their end of season 2020 WAR rank. The higher this number, the more value the model suggests they might add in 2021. Of course, many players have off the field factors playing into their 2021 ADP (Aaron Rodgers, Deshaun Watson), causing wild “Difference” figures. But I highlighted hand-selected players I feel are likely being under drafted in the early rounds and worthy of consideration to add to your Fish Bowl school:

The chart offers insight into how the market views not only specific players, but positions as a whole compared to how they actually fared in 2020. Here are some key trends peppered with some advice on possible angles to take:

Moving on from the top-5 round chart, knowing how the market is reacting to kickers is good to keep in mind. The graph below charts each kicker’s current Fish Bowl APD: 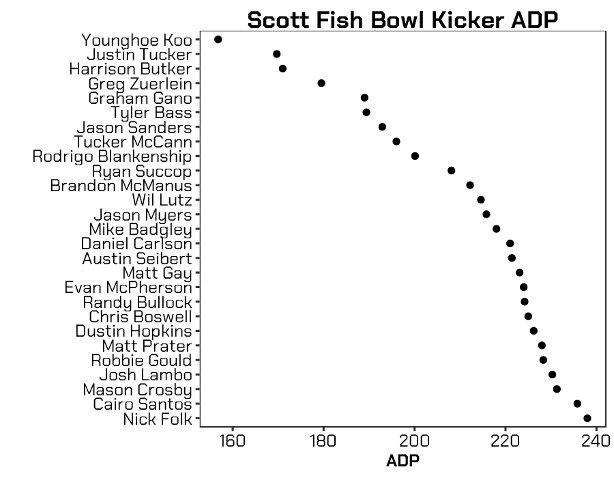 A couple things of note here. You don’t need to go too early on a guy like Koo, Butker, or Tucker. Let others swoop first, while you finish piling high-upside players. But you also don’t want to wait until the kicker rush around ADP 210 - 230 to take a couple bites of the apple. Worst case scenario, a couple of kickers on the squad will coincidently act as placeholders helping your team through bye weeks.

The Scott Fish Bowl challenges us to work with new scoring settings, forcing us to zig when we’re used to zagging. Don’t be afraid to play wildly different while others play conventionally. The data is on your side. Good luck to you as you set off to WAR in the Fish Bowl.

*Would be #1 overall if certain to be back in Green Bay.