Luckily for our subscribers, we can answer all of these questions and more. But in order to do so, we first had to quantify strength of schedule. This is typically done by calculating a defense’s FPG allowed average, and then looking at the average for all players over a full season. This will also be our approach; however, we’ll be taking things one step further — we’re going to use a control for the opposing offense by measuring FPG over an opponent’s average. 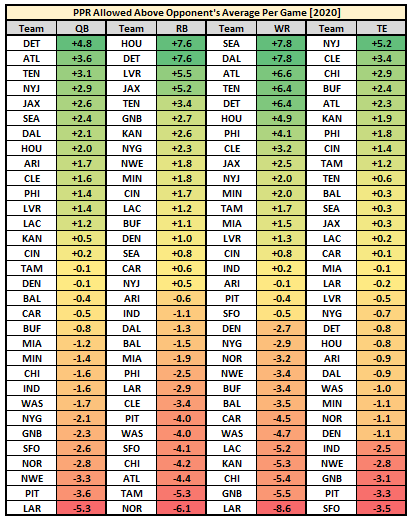 For instance, last season, opposing tight ends averaged +5.2 fantasy points per game over their season-long average when facing the Jets, which ranked worst in the league. (The Jets were the most favorable fantasy matchup for opposing tight ends — worth, on average, an additional 5.2 fantasy points per game.) On the opposite end of the spectrum, tight ends fell short of their season-long average by 3.5 points when facing the 49ers, which ranked best in the league. (The 49ers were the toughest fantasy matchup for opposing tight ends.) Calculating these numbers for all teams and then applying the full-season average for all players quantifies in real terms which players had the easiest and most difficult schedules for fantasy last year. We can also use these numbers to project out strength of schedule for each team and each position in 2021.

Last season, Jonnu Smith had the 11th toughest schedule among all fantasy tight ends. His average matchup was worth -0.46 [team tight end] FPG. Because he was responsible for 58% of the fantasy points generated by Tennessee’s tight ends last year (in games active), we can say that — adjusted for strength of schedule, or if he had a perfectly average strength of schedule last year — he would have scored an additional +0.26 fantasy points per game. Looking forward, Smith’s schedule is much improved (most-improved at the position), very soft (softest at the position), and worth an additional +1.12 fantasy points per game in real terms. Essentially, if he had this schedule last year, he should have scored an additional +0.64 in real terms (adjusting for usage). This would push his total up to 10.3 FPG, which would have ranked 11th (four spots higher than his actual finish). 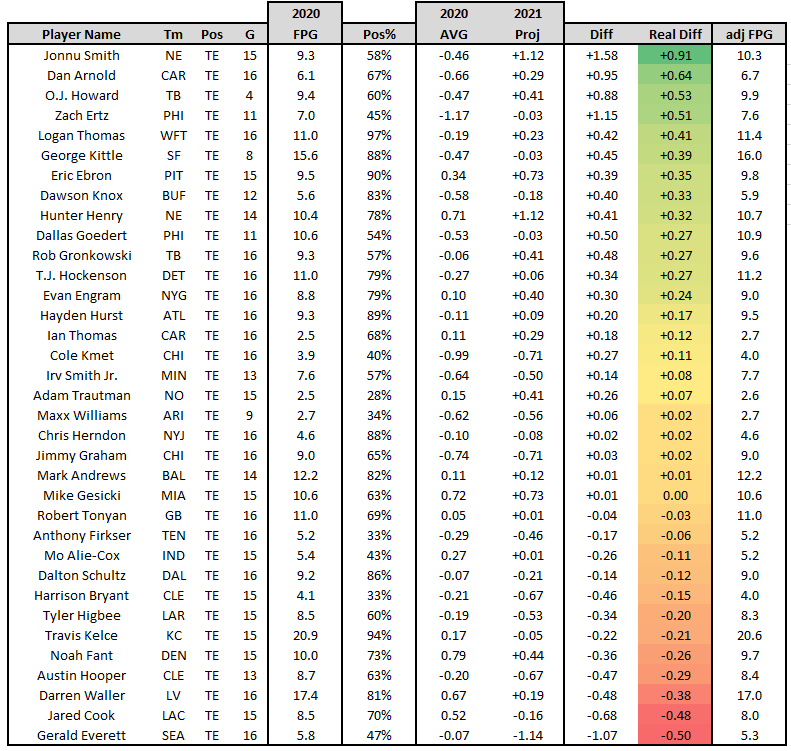