In yesterday’s article, we took a look at the 20 most and least consistent players for fantasy. We determined this by first looking at each player’s scoring output on a week-to-week-basis and then by calculating each player’s coefficient of variation (CV).

Today, I wanted to take the same approach, but focusing instead on the consistency of a player’s role (rather than his production). I suspect this might be even more valuable for fantasy purposes, because it’s more predictive, removing efficiency and touchdown luck from the equation.

Among all non-quarterbacks to average at least 10.5 expected fantasy points per game, here were the 20 most and then least consistent players (by value of volume/role) last season. 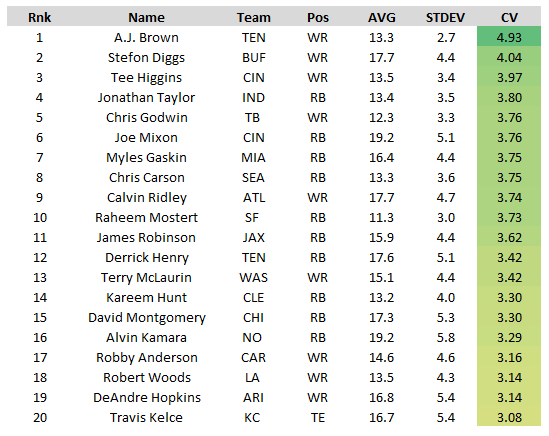 1. A.J. Brown was fantasy football's most-consistent player by usage in 2020, and by a wide margin. In 11 of 14 games he earned between 12.1 and 15.1 XFP. By a more basic stat, Brown saw between 6 and 9 targets in 12 of 14 games last year. The consistency is impressive, but maybe not as much as his efficiency. His volume, though consistent, wasn’t great, or at least, was nowhere near as good as his production might otherwise imply.

Last season, Brown ranked just 25th among wide receivers in XFP per game (13.3) but 8th in FPG (17.4). His differential of +4.0 FPG ranked behind only Davante Adams, Tyreek Hill, and Will Fuller. In 2019, Brown was again absurdly hyper-efficient, outscoring his expectation by +4.7 FPG, which ranked 2nd-best, behind only Michael Thomas. What these numbers are telling us is that either Brown is easily already one of the best wide receivers in football, or he’s long overdue for a heavy regression to the mean.

With three of Tennessee's five most-targeted receivers now off the team (Corey Davis, Jonnu Smith, Adam Humphries), and with little done to replace them, fantasy drafters are now assuming Brown can return a WR5 ADP. And I suppose that sort of thinking makes sense — if Brown can produce like a fantasy WR1 on fantasy WR2 levels of volume, imagine what he can do with WR1-levels of volume! Because Tennessee is going to have no choice but to force feed him the ball this year, right?

I think that’s mostly correct. Less target competition should mean more targets. But it can also result in less efficiency, as a result of more defensive pressure. Each week opposing defenses know they only really need to account for one Tennessee pass-catcher, and that’s Brown. Look for efficiency to decline in 2021, but for an increase in volume to more than bridge the gap. His WR5 ADP expectation sounds about right to me. 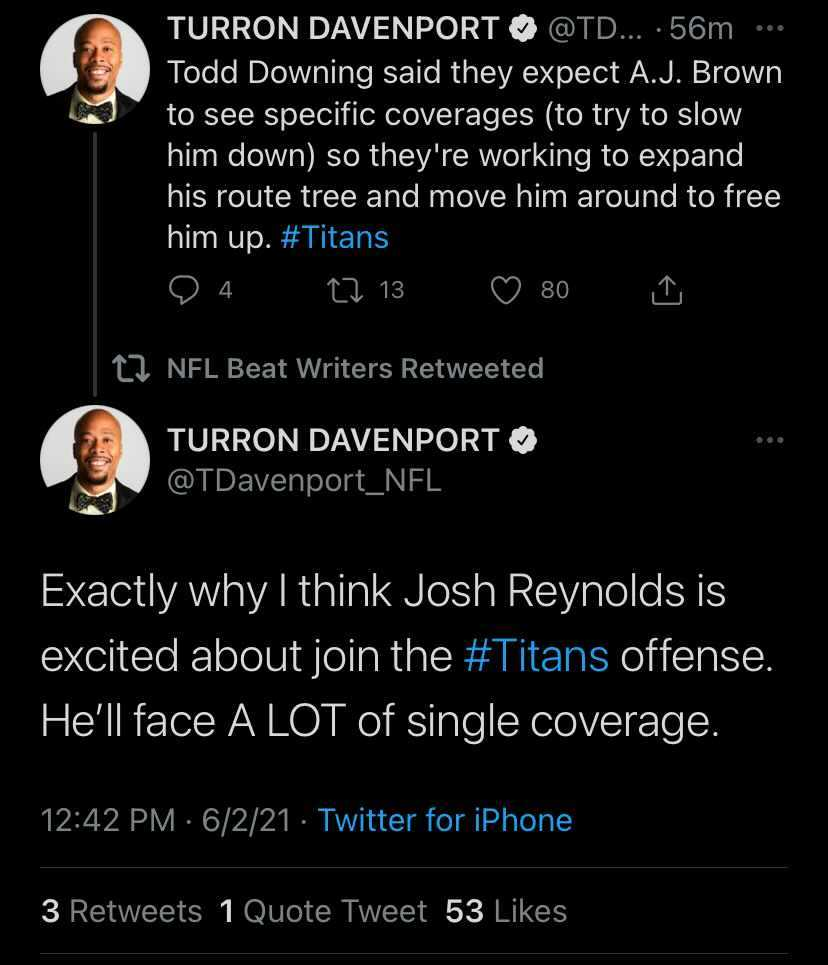 2. Stefon Diggs is our second-most consistent wide receiver by usage and was also our most consistent wide receiver by production last year. He hit double-digit fantasy points in all 16 of his games, and earned between 8 and 16 targets in 14 of 16 games. He’s come a long way from the WR2/deep-threat role he had in Minnesota — he’s now clearly QB Josh Allen’s go-to guy, the clear focal-point of Buffalo’s passing attack, and a fairly CB-immune/matchup-independent WR1 week-to-week. He should be locked in as a top-3 wide receiver in 2021 fantasy drafts.

3. It was somewhat surprising to see Jonathan Taylor make this list. He was fairly inconsistent by production but very consistent in terms of usage. But like Brown, his volume also wasn’t anywhere near as good as his production implies. He ranked 9th in FPG (16.9) last year but just 19th in XFP per game (13.4), scoring +3.5 FPG over his expectation (4th-best). By XFP, he offered a high floor, with a season-low of 9.1 XFP, but didn’t offer much of a ceiling. His season-high in XFP came in Week 17, when he scored 38.4 fantasy points, but on an expectation of just 20.9. For perspective, across the full season there were 91 instances of a running back eclipsing that mark in a single week.

Again, like with Brown, fantasy drafters are expecting Taylor’s role to improve and his efficiency to remain as strong as it was in 2020. That makes me nervous, because (although I think Taylor is already one of the most talented running backs in football) volume is far more sticky and predictive than fantasy production, and efficiency (the differential between those two numbers) always tends to regress to the mean. There are very few players (e.g. Alvin Kamara, Tyreek Hill, Christian McCaffrey) who can sustain a differential this high year after year, but maybe Taylor is one of them.

In any case, Taylor currently ranks sixth among running backs in ADP, and I’m skeptical he’s worth that price-tag. If he’s a bell cow (defined here) it’s an appropriate valuation, but if he’s stuck in a committee role similar to the one he had last year, when he averaged a 50% snap share (27th), it feels like a massive reach. I certainly get the allure, and it’s hard not to fawn over his drool-inducing upside. He averaged 26.1 FPG over his last five games last year. He only reached 60% of the team’s snaps three times all year and still finished as a RB1. So, if your argument is simply: “Look at how good he was last year. Now imagine what he could do with a bell cow workload (80% of the team’s snaps and heavy target-volume out of the backfield)”, it’s hard to come up with a counter to that. But personally, and until I hear anything different come out of Indianapolis, I’ll be gravitating towards safer options with a more guaranteed workload.

4. It’s encouraging to see that Myles Gaskin ranked top-7 in consistency of usage and consistency of production last year. Although he feels like one of the most unsexy picks you can make in 2021 drafts, he’s one of my favorite picks to make. From Week 5 until the end of the season, Gaskin averaged 15.7 carries, 4.5 targets, 19.7 fantasy points, 18.0 XFP per game on a 69% snap share. Across the full season, only seven running backs had a higher Snap%, only four averaged more XFP per game, and only three averaged more FPG. And yet he ranks just 25th among running backs in ADP. Miami brought in only Malcolm Brown and seventh-round pick Gerrid Doaks as competition for Gaskin, so we have to think he remains the heavy favorite to resume the borderline bell cow role he saw in 2020. And the offense as a whole should be more productive (meaning more red zone drives for Gaskin) and more efficient with a healthier and more experienced Tua Tagovailoa who now has WRs Will Fuller and Jaylen Waddle to throw to. 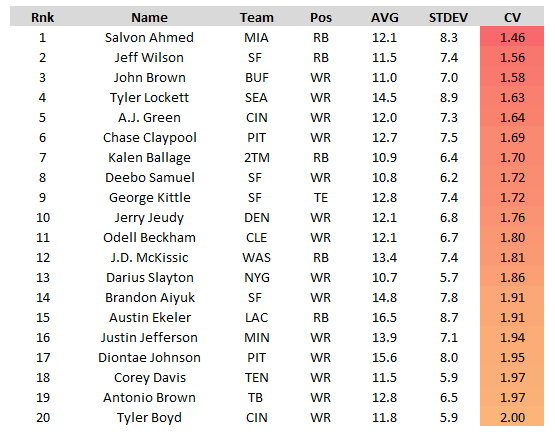 1. Salvon Ahmed appears inconsistent, but only because he was effectively a bench player when Gaskin was healthy vs. a borderline-bell cow when Gaskin was out. In Weeks 10, 11, and 15, with Gaskin out, Ahmed averaged 18.7 carries, 3.3 targets, 16.0 fantasy points, and 19.1 XFP per game, on a 68% snap share. This is another reason to like Gaskin -- it’s clear the RB1 role in Miami is more valuable than fantasy drafters are currently implying it is.

2. We already spent quite a bit of time on Tyler Locket in yesterday’s article, but here’s a fun graph illustrating just how inconsistent he was in contrast to one of the most consistent wide receivers in fantasy (Stefon Diggs). Here it is by XFP (usage): 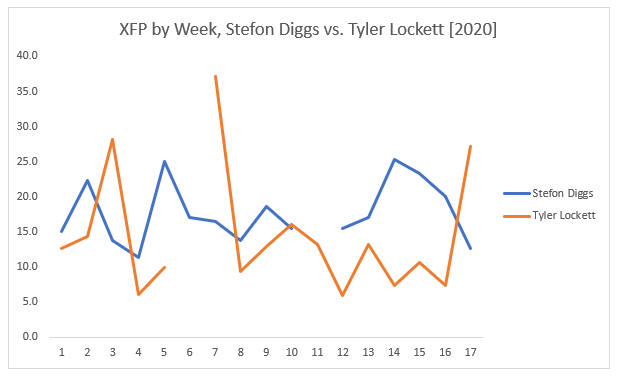 Here it is again, but this time by production: 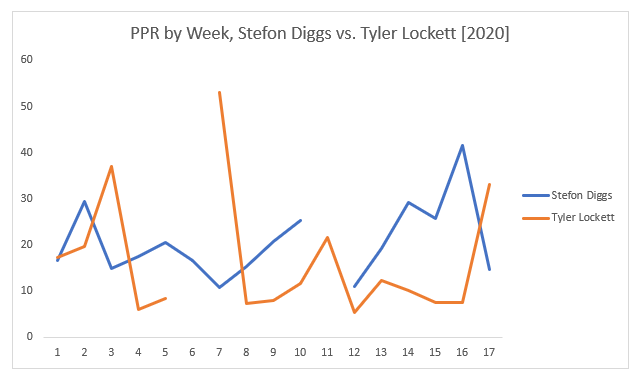 3. J.D. McKissic was one of fantasy football’s least-consistent players by usage last year, and that shouldn’t be at all surprising. Committee running backs (i.e. workhorse running backs vs. scatbacks, as opposed to bell cows) are always going to be more inconsistent on a week-to-week basis, because they’re so gamescript dependent. While I avoid scatback running backs like the plague in start/sit leagues, they can be very valuable in best ball leagues. (Last year, by win-rate, McKissic was 90% more valuable in BestBall10s than in ESPN start/sit leagues.) McKissic was inconsistent last year, but maybe not if you know what to look for, which is to say he was consistently valuable when playing behind negative gamescript and consistently underwhelming when Washington played with a lead. Last season McKissic averaged 8.3 targets and 14.7 FPG in losses but only 5.0 targets and 8.4 FPG in victories.

4. Brandon Aiyuk appears highly inconsistent by this methodology, but I don't really see that being the case. Instead, it’s just that it took him a little while to get going, which is understandable for a rookie wide receiver. From Weeks 7-15 (so, prior to the ankle injury he suffered in Week 16 which caused him to sit out Week 17), Aiyuk ranked third among all wide receivers in FPG (20.3). Only Davante Adams (28.5) and Tyreek Hill (27.5) ranked higher. And over that span, he was incredibly consistent, scoring between 17.5 and 23.1 fantasy points in six of six games.

5. Similarly, Diontae Johnson appears inconsistent, but that was entirely due to injury. Once that’s been accounted for, it’s clear he was actually one of the most consistent players in fantasy. Due entirely to injury, Johnson fell under 50% of the team's snaps in Weeks 3, 5, and 14. He played on 76% of the team's snaps in Week 8 but clearly wasn't quite right after spending some time in the medical tent with an injury suffered in the first quarter. Including the postseason, but excluding those four games, Johnson saw double-digit targets in 11 of 12 games, with the lone exception being Week 17, the one game QB Ben Roethlisberger didn't play. Over this span, Johnson averaged 12.3 targets, 83.0 yards, 19.6 XFP, and 19.4 FPG. If over the full season, those numbers would have ranked best (1.7 more than next-closest), eighth-, second-, and fourth-best. He’s a smash-value at current ADP (WR22).