You’ll notice that our best ball rankings look quite a bit different than our season-long projections. That’s due primarily to one thing: week-to-week consistency.

Over the past two seasons, Tyler Lockett ranks 7th among wide receivers in total fantasy points, averaging 16.2 FPG. He played in 32 games but scored 43% of his total fantasy points in just six of those games (19% of his total games). Outside of these games, Lockett averaged just 10.9 fantasy points per game. For perspective, that would have been the difference between finishing 14th and 59th among wide receivers in FPG last year. Or, rather, that’s the difference between Lockett being a treasured fantasy asset and worthless waiver-wire fodder.

An even better example is T.Y. Hilton. According to ESPN, when Hilton was started in over 50% of leagues last season, he averaged just 6.1 FPG. And among his nine most-started weeks, Hilton averaged just 5.9 FPG with a high of only 9.9 fantasy points. But across his six least-started weeks, he hit highs of 23.1, 21.0, and 16.1. Basically, Hilton was highly volatile and nearly impossible to predict week-to-week. So, in a start/sit league, Hilton was worse than useless, only ever returning negative value to your team – when you played him, he killed you, and when you sat him, he went off. It’s not hard to see why predictability and week-to-week consistency are so important in start/sit leagues. But in best ball leagues, Hilton was far more valuable.

In best ball leagues, volatility is your friend — there are no start/sit decisions and your highest-scoring players automatically slide into your starting roster at the end of the week. It’s no surprise then that Lockett and Hilton rank much higher in our best ball rankings than in our projections.

With Lockett, Hilton, and best ball leagues in mind, I wanted to look at 2020’s least and most consistent scorers for fantasy.

Tristan Cockroft does this every year for ESPN, as does John Paulsen for 4for4. I’m going to approach this in a similar way to Paulsen. We’ll be looking at every player’s numbers in every week over the course of a full season. We’ll then calculate a player’s standard deviation to determine how much variation there was in their fantasy scoring on a week-to-week basis. Then, we’ll standardize these scores across scale by dividing a player’s fantasy points per game into his standard deviation, to determine that player’s coefficient of variation (CV).

Among all non-QBs (min. 10.5 fantasy points per game), here were last season’s 20 least and then most consistent fantasy scorers by coefficient of variation:

(This is our first look at fantasy consistency, looking at consistency by fantasy points scored. It’s a good starting point, but with fantasy points so dependent on touchdown luck/variance, I don’t know that it’s the superior methodology. Instead, I think the better approach is measuring consistency by role and usage. Lucky for you, that’s exactly what we’ll be doing in tomorrow’s article.) 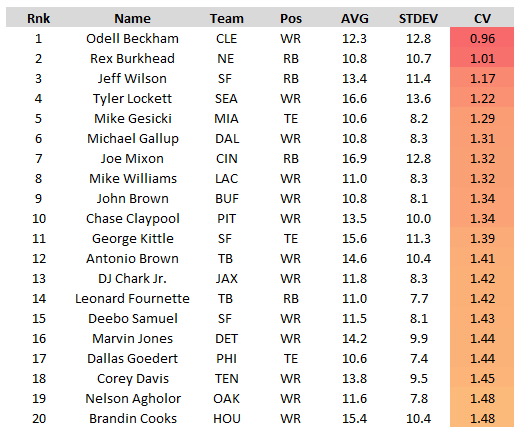 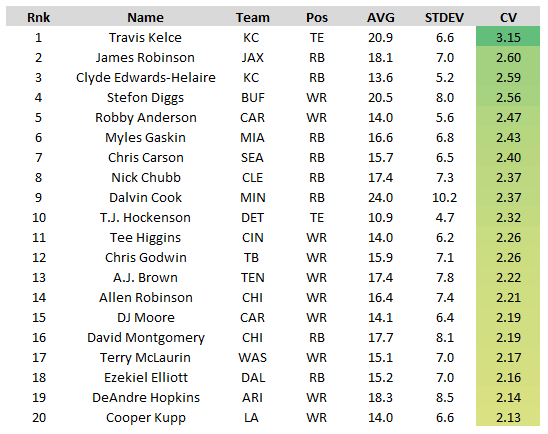 Kelce scored 315 fantasy points in BestBall10s last year. That was almost exactly double the 7th-highest scoring tight end over this span. The No. 3, No. 4, and No. 5 highest-scoring tight ends combined to score 532 fantasy points. But, if in a best ball format (taking the higher score in each week), and if treated as one player, they combined to score just 259 fantasy points. Of course, we're neglecting any points one of these tight ends might have scored in the flex. But still, this is absurd. At the tight end spot, Kelce alone (bye week factored) was 22% more valuable than the No. 3, No. 4, and No. 5 highest-scoring tight end combined. Factor in draft capital – one Round 2 pick vs. 3 mid- to later-round picks – and it’s clear, Kelce was a massive cheat code in best ball. WAR expert Jeff Henderson would argue (and will in a forthcoming piece) Kelce is legitimately in play as a top-3 overall pick in 2021 best ball drafts.

Finally, as a bonus aside, I wanted to look at positional consistency. Looking only at the 20 highest-scoring players at each position, here’s how each position fared in terms of coefficient of variation over the past three seasons. The QB position was the most consistent, followed by RBs, then TEs, and then WRs.

I talk about all this in more detail in my Best Ball Primer & Strategy Guide.