Every week, Graham Barfield and Scott Barrett work to provide their most and least favorite plays for shallow (10-teams) and deep (12- and 14-teams) leagues. Here’s the Week 3 start/sit:

The hope for Cam Newton-drafters was good rushing volume and enough competency as a passer to keep him starting each week, but it appears we've gotten a great deal more than that. And maybe even something close to Newton's elite 2016 season. Through two games, Newton ranks 8th in passing yards (552), 2nd in rushing yards (122), and 3rd in FPG (30.7). Yeah, until further notice you’re starting him as a top-5 option. This week’s neutral at-worst matchup poses no concerns.

I was high on Wentz coming into the season, expecting a bounce-back year on the back of a healthy receiving corps, but his first two games have been far from ideal. In fact, they’ve been flat-out awful. Through two games Wentz ranks dead-last of 32 qualifying quarterbacks in PFF Grade. This week’s matchup is about unimposing as it gets, but, favored by 5.5, and against a bottom-3 run defense, expect Philadelphia to lean heavy on Miles Sanders, rather than let Wentz continue to throw as much as he has. Ranked as just a mid-range QB2 this week, you’re better off benching Wentz until he figures out the cure to whatever’s ailing him.

Through two games, Roethlisberger’s right arm looks rejuvenated and strong. His ball still has plenty of zip, his processing has looked sharp, and now he’s in a great matchup in what could be a high-scoring affair against Deshaun Watson. Roethlisberger has been a low-end QB1 to start this season -- he finished as the QB11 in Week 1 (22.1 fantasy points) and was the QB16 in Week 2 (19.2 fantasy points) -- but he should find a ceiling here against the Texans secondary. Through two games, Houston has allowed the third-worst passer rating, fourth-worst completion rate, and the ninth-most fantasy points per pass attempt.

Unlike Big Ben, something is off with Brees. His ball doesn’t have the same velocity and HC Sean Payton seems to know it. Brees’ average depth of throw (aDOT) downfield is just 5.2 yards through two games, which is the lowest clip in the league by far. Just two of Brees’ 68 pass attempts (2.9%) have traveled 15 or more yards in the air, which is also the lowest rate in the league. Especially without Michael Thomas, Brees just doesn’t have enough upside to start in any 1-QB 12-team leagues. We have him buried at QB21 this week.

You’re not just starting Taylor this week, you’re starting him as a top-6 option. As a generational prospect, nothing about Taylor’s Week 2 usage was surprising. 26 carries and 2 targets on 66% of the snaps? The only surprise was that he only scored 19.0 fantasy points. Favored by 9.5, with the 5th-highest implied point total of the week (27.25), against a Jets defense that ranks 5th-worst in YPC allowed (5.00) and 7th-worst in FPG allowed to RBs (31.7), expect similar usage and an even better outcome this week.

James Conner is back? James Conner is back! He played 77% of the snaps in Week 2, earning 16 of 19 carries and 2 of 5 targets out of the backfield. Against Denver’s stout run defense he totaled 121 yards and a score. This week, at home and favored by 4.0, he gets a Houston defense that ranks 2nd-worst in YPC allowed (6.28) and 4th-worst in rushing fantasy points allowed (23.0). I understand he burned you in Week 1, but you can start him with confidence in Week 3.

Another week, and another Gurley “sit” recommendation. Ol’ Dusty Todd has been completely phased out of Atlanta’s passing game, earning just 2 of the team’s 10 receptions out of the backfield. Game script is in his favor (Falcons are -3) and he has totaled 35 carries in two losses, but without much success (3.34 YPC). Against Chicago’s stout run defense, he’s an easy bench.

With Christian McCaffrey (ankle) on IR, Davis should have the entire backfield to himself for the next three weeks. Right now, the Panthers only have one other RB on the active roster. It’s Trenton Cannon and he only has 38 career carries -- all of which came in 2018. Because Carolina is so thin at the position, I’m expecting the Panthers to use Curtis Samuel some at running back in CMC’s absence. Regardless, Davis is a locked-in RB2 play on volume alone. We have Davis projected to see 18.5 touches.

It’s over. It only took two weeks, but it’s over for RoJo. Leonard Fournette took over as the lead back and he’s not looking back. After getting just five carries in his Bucs’ debut, Fournette out-touched (16 to 9), out-gained (116 to 27 scrimmage yards), and saw more snaps (26 to 21) than Jones in Week 2. After never truly winning the starting job over Peyton Barber last year, Jones has, once again, lost his value to another running back. Why else would Tampa Bay bring in Fournette a week before the season other than to start him?

If it weren’t for the Jets, the Lions would be the laughing-stock organization of the NFL. Imagine spending the third pick of the 2nd round on a talented, dual-threat running back and then sticking him in a three-man committee with a 35-year-old and a back that hasn’t looked the same since 2018. Oh, wait. Through two weeks, the Lions RB snaps are split basically right down the middle: D’Andre Swift (54), Adrian Peterson (39), and Kerryon Johnson (39) while Peterson (21) and Johnson (15) lead the team in carries over Swift (8). At the very least, Swift has seen 5 targets in back-to-back games in his first two starts but his lack of carries really limits his floor. Hopefully the Lions realize that Swift is the best talent here, but until that happens, he’ll remain a risky FLEX start.

Robinson is seeing terrific volume – he ranks 12th in XFP per game (16.0), 8th in air yards per game (117.0), and 11th in targets per game (9.0), he’s just not doing a lot with it. Why? Poor QB play. But that shouldn’t be as much of a concern this week. Atlanta ranks 2nd-worst in passing yards allowed per game (386.0) and 2nd-worst in passer rating allowed (125.5). Robinson also gets a top-flight CB matchup against Isaiah Oliver, as Wes Huber outlined here. 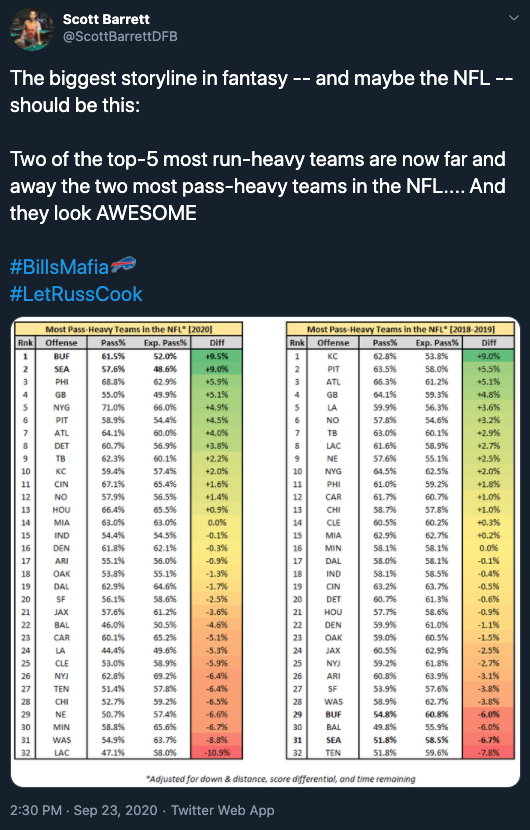 The biggest storyline in fantasy football, and maybe all of football is this – the Seahawks are rightfully, finally, letting Russell Wilson cook. Until that changes both of Seattle’s WRs need to be viewed as top-15 options. And, in this matchup, maybe top-10. Lockett runs 61% of his routes from the slot and Metcalf runs 49% of his routes from Wilson’s left. Dallas is giving up the most FPG to opposing slot WRs and the 6th-most FPG to opposing left WRs (and are now without the CB who typically lines up on that side of the field).

In my Week 3 XFP Report, I encouraged you to buy low-on Green, who has seen terrific volume in his first two games. “Through two weeks, Green ranks fourth in targets (22), first in air yards (338), first in end zone targets (6), first in deep targets (7), first in XTD per game (1.0), and first in XFP per game (21.0).” However, I cautioned you against buying low on Green this week. That’s because, in addition to shaky rapport with Joe Burrow and his own struggles, he has a brutal matchup this week, likely to draw shadow coverage from Darius Slay. Slay played well against Terry McLaurin in Week 1 (61 yards) and Robert Woods in Week 2 (14 yards). You’re better off keeping Green on your bench for at least another week.

After a strong start (5/61 in Week 1 and 7/125/1 in Week 2), McLaurin is in an eruption spot this week against a completely over-matched Browns secondary. With Greedy Williams (shoulder) still banged up, Cleveland only has one good cornerback in Denzel Ward. And they have been set on fire through two games. The Browns have already allowed the sixth-most fantasy points per game to wide receivers. McLaurin has been the clear alpha receiver we expected him to be, earning 27% of Washington’s targets and 34% of the air yards.

Is Lamb already the Cowboys No. 2 wide receiver? He’s out-targeted Michael Gallup 15 to 10 in his first two games and has been getting wide open as the Cowboys primary slot wideout. 14 of Lamb’s 15 targets have come out of the slot and this week he draws a premier matchup. In Week 1-2, Seattle has allowed a league-high 39.9 fantasy points per game to slot receivers. Lamb is an amazing WR3 play in 12-team leagues this week.

Sit: Will Fuller and Brandin Cooks at Steelers

Even though he missed snaps with a hamstring injury against the Ravens, Will Fuller isn’t on the Texans injury report -- but he’s tough to trust this week against the Steelers stout secondary. Brandin Cooks (5/95) benefited from Fuller’s absence last week but neither receiver is a particularly safe WR3 play. Pittsburgh had a top-3 secondary last year and that has continued through two games so far. The Steelers have allowed the league’s lowest completion rate, the third-fewest expected points per pass, and the seventh-lowest QB rating.

The Bills have given up just 133 rushing yards to opposing RBs (5th-fewest). They rank best in FPG allowed to opposing slot WRs (9.8), after ranking 6th-best last year. That’s bad news for Cooper Kupp. They’re either the toughest or second-toughest team in the league against opposing outside WR1s, with Tre’Davious White ranking top-5 in yards allowed per snap in coverage over the past two seasons, despite routinely shadowing the league’s best WRs. That’s bad news for Robert Woods. It’s really a tough matchup all around, but it’s probably the least-toughest for Higbee, as Mike Gesicki showed us last week. Expect plenty of volume and another big game this week.

The 49ers have given very little to opposing TEs in the Kwon Alexander-era. Last year, San Francisco gave up the 6th-fewest FPG to opposing TEs (9.8). This year, they’ve given up just 3 catches for 26 yards and zero touchdowns, holding Chris Herndon to just 1 catch and 5 yards last week. Without Saquon Barkley and Sterling Shepard, New York might have no other choice but to target Engram. But then again, he also hasn’t looked very good, ranking 66th of 71 qualifying TEs in PFF Grade. Injury Expert Edwin Porras warned us this might happen in May – “Lisfranc injuries reduce NFL offensive players’ on-field production by an average of 21% in the first season following surgery.” I’d consider benching him in shallow leagues if you have a viable second option.

Brees might be on the decline, but he can surely hit Cook a few times here in a perfect matchup. The Packers struggled against tight ends last season and that trend has continued so far. Green Bay has allowed the sixth-most fantasy points and the most yards per target to tight ends in Week 1-2. Cook has been as consistent as they come -- he’s cleared 60 yards or scored a touchdown in 11 of his last 12 games -- so I’m going back to him as a must-start TE1 in 12-team leagues.

Obviously, this is dependent upon whether or not Jack Doyle (knee) plays. But, if Doyle is out again, Alie-Cox will become a top streaming play for deeper leagues against this completely dead Jets defense. Alie-Cox hammered the Vikings for 5/111 last week and is in an even better matchup this week. The loss of Jamal Adams has been a massive loss (shocker!) and their secondary has really struggled so far. They’ve been particularly bad against tight ends, too, allowing the fourth-most fantasy points per target and fifth-worst catch rate to the position.

Our worst fears have been realized with Hooper. He’s the fifth option (behind Beckham, Chubb, Landry, and Hunt) on a low-volume pass offense. After being held below 30 yards just twice in 13 games last year, Hooper had just 2/15 in Week 1 and 2/22 in Week 2. With just six targets so far, there is no way you can play him with any confidence this week.