Hello, and welcome to the Week 13 XFP Report. If you’re unfamiliar with XFP, I’ll get to that in a little bit.

Through 12 weeks of action, here are the top-25 players in expected fantasy points (XFP) per game: 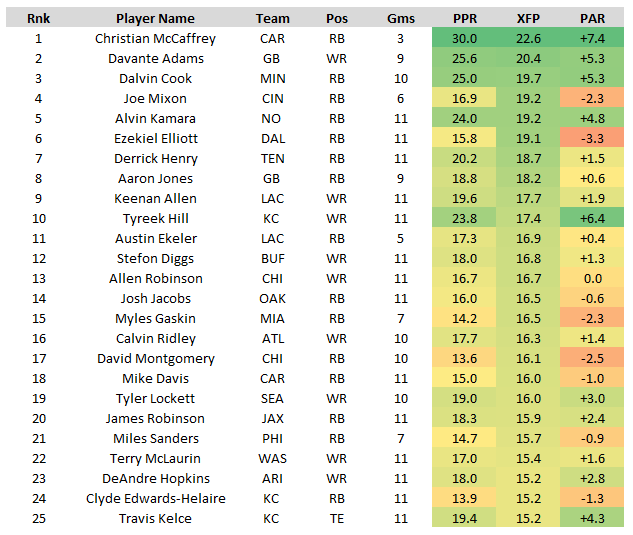 Notes: We’re currently missing Monday and Wednesday night’s games from our sample. We’ll have that updated when they come in, here.

Ekeler was a bell cow in Week 12, with Kalen Ballage out, playing on 73% of the team’s snaps (5th-most on the week), and earning 14 carries and 16 targets. Better yet, he led all players in XFP, totaling 35.3. He wasn’t very efficient on that good volume, scoring just 23.9 fantasy points, but this was about a week early as it relates to his injury timeline, and he’s long been one of the most efficient RBs in fantasy, so don’t be too concerned in that regard. 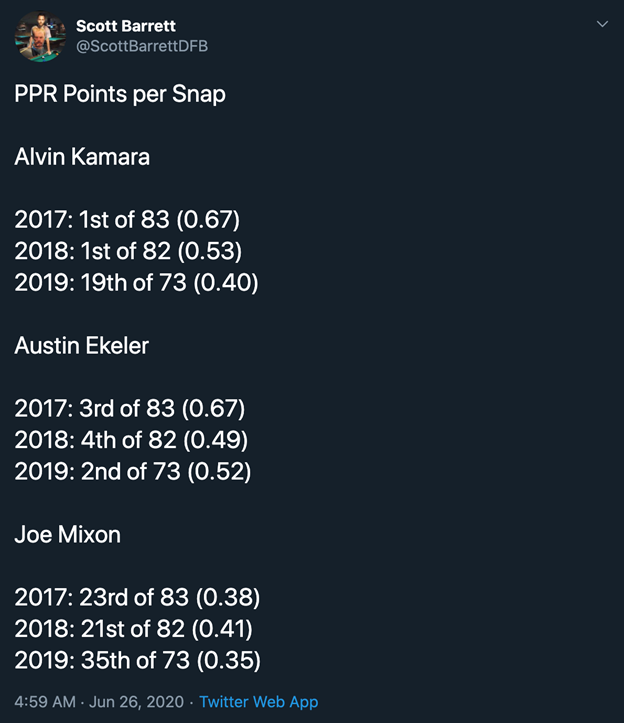 Through 4 healthy games, Ekeler is averaging 15.3 carries, 8.0 targets, 20.5 XFP, and 21.0 FPG. If over a full season, those numbers would rank 12th, 1st, 2nd, and 4th-best among RBs. In other words, he’s seeing even better usage than he saw through the first 4 weeks of last season during Melvin Gordon’s holdout. Over that stretch, he averaged 26.8 FPG – the only player coming anywhere near Christian McCaffrey during that span. He averaged 71% of the snaps (vs. 67% now), along with 14.0 carries and 6.3 targets per game. From Weeks 5-17, those numbers dropped to 53%, 6.3, and 6.9, respectively. And still, he rounded out that stretch ranking 5th in total fantasy points, averaging 16.8 FPG.

Might he be a league-winner down the stretch and through the fantasy playoffs in 2020? I think the chances are high.

Robinson went undrafted in 99% of leagues this offseason, but he’s emerged as a quiet superstar and a likely league-winner for those of you who secured him off waivers early in the season.

Robinson played on 97% of the team’s snaps in Week 11, and he ranks 1st in Snap% since Week 7 (88%). With Chris Thompson on I.R., he’s now a full-on bell cow, and maybe the best example of a true bell cow we have this year. And, for fantasy, that goes a long way. Jacksonville is terrible, game script is consistently horrible, the offense is bad, and the offensive line is even worse. And yet, I’m confident Robinson continues to produce as a mid-range RB1. Why? Because a bell cow RB is the most valuable asset in fantasy.

Gibson isn’t quite a bell cow, but his Week 12 usage was highly encouraging, and a full-on bell cow workload with league-winning upside has always been in his range of outcomes. Though Gibson had over twice as many career receiving yards as career rushing yards in college, J.D. McKissic had over twice as many targets as Gibson heading into last week.

In Week 12, Gibson saw season-highs in Snap% (67%), Route% (61%), rushing attempts (20), targets (7), XFP (21.8), and fantasy points (36.6). For comparison, McKissic saw just 1 carry and 2 targets. Of course, game script (a 25-point win) benefited him far more than McKissic, but this was all still highly encouraging. My favorite comp for him coming out was pre-injury David Johnson, and I think there’s a chance he’s gifted a bell cow workload and goes Super Saiyan down the stretch (especially with Captain Checkdown Alex Smith under center), as Johnson did in his rookie season.

Week 13 – as 10.0-point underdogs against the league’s toughest run defense (Pittsburgh) – will be a good test. 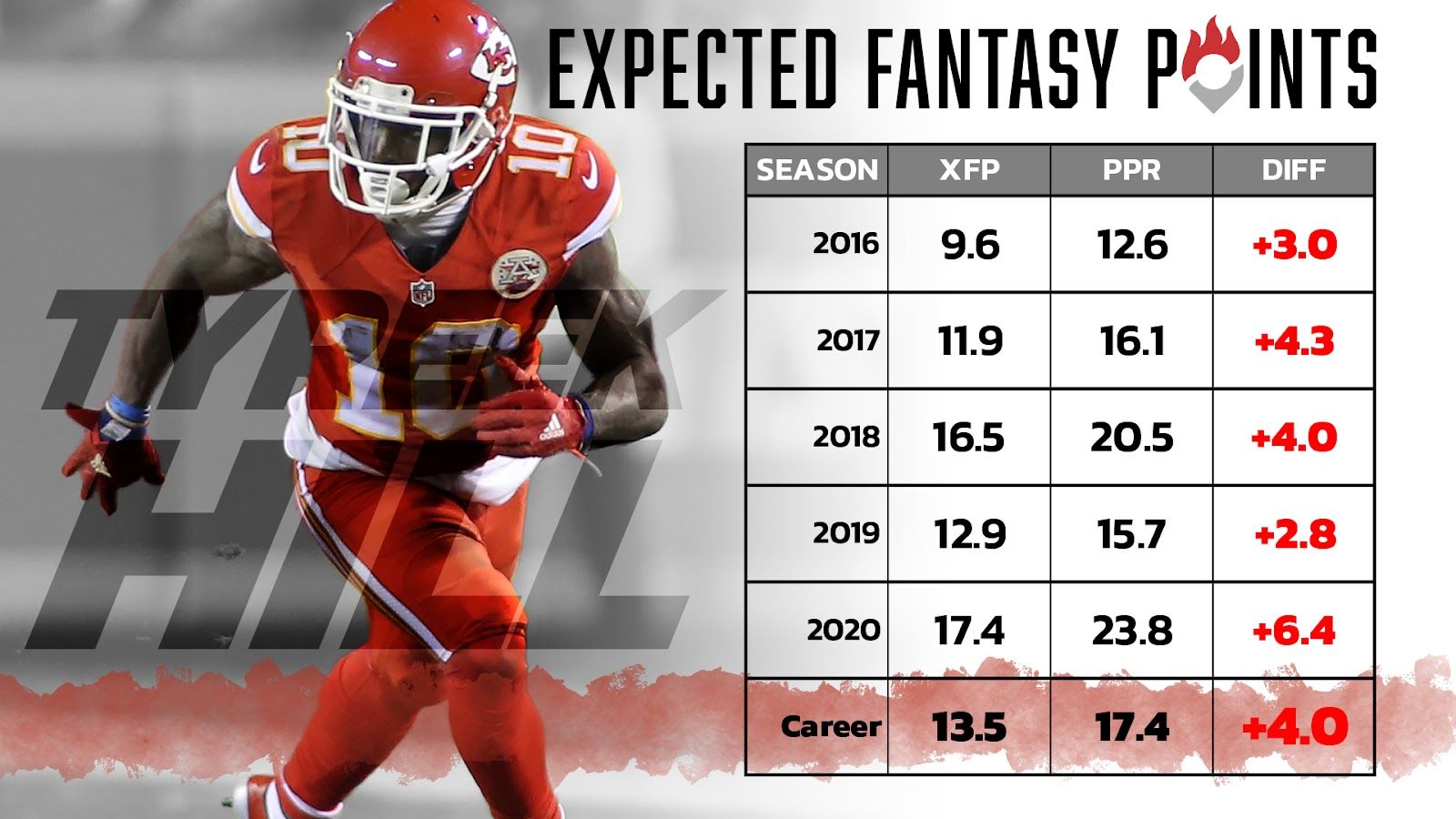 Clearly, the talent has always been there for Hill. Volume was the only thing standing in the way of him being – I don’t know – let’s say, the most valuable player in fantasy, instead of just a top-3 WR asset. But now he’s finally seeing elite levels of volume.

Will this continue? It’s hard to say. This newfound boost to truly elite levels of volume is highly encouraging. As is the fact that Kansas City ranks as the most pass-heavy team over expectation since Week 7 – passing on 69% of their plays versus an expectation of 51% (accounting for gameflow and down and distance). What’s his upside? His upside is Exodia. If this volume continues, he could be one of those players where it’s nearly impossible to have won your fantasy championship without him. As a worst-case scenario, he just goes back to who he was before – an easy top-5 fantasy WR.

Samuel ranked 8th in XFP in Week 12 (19.5), totaling 13 targets but just 6.0 total air yards. Over his last 3 games, he’s averaging 1.3 carries, 8.0 targets, -9.3 air yards, 14.3 XFP, and 18.2 FPG. It’s pretty wild to see Samuel draw basically gadget-type usage, but then again manufactured touches are not a bad thing, and he has been producing with that volume. Remember, air yards are pretty overrated in fantasy football. Deep targets are more valuable than short passes, but not by much, and there is more volatility there. But all of this gets captured into a player’s XFP anyway. Just try to think of Samuel as a high-floor / low-ceiling play, and with this usage, feel free to totally ignore his CB schedule.

Drake was 0.07 XFP away from hitting a new season-high in XFP in Week 11 (16.0), totaling 11 carries, 5 targets, and 2 opportunities inside the 5-yard-line. He smashed that number in Week 12, totaling 29.5 XFP on the back of 22 carries, 4 targets, and 5 opportunities inside the 5-yard-line. However, it’s still a little too early to get excited – he played on only 55% of the team’s snaps over this span. Needless to say, I’m doubtful he turns things on down the stretch and reminds us all why we were drafting him top-25 over the summer.

Meyers is seeing elite volume. Since Week 7, he’s maintained a 33% share of his team’s receiving XFP. Davante Adams currently leads the league with 34%, just ahead of Adam Thielen (31%). Unfortunately, New England is the 3rd-most run-heavy team in the league, so it hasn’t exactly translated into a lot of fantasy points. And he’s still tough to trust in season-long, but he’ll be a popular bring-back on Chargers-stacks in DFS this week. He averages 8.2 targets, 13.2 XFP, and 14.2 FPG over his last 5 games. Across the full season, he ranks 9th in PFF Receiving Grade (84.3) and 6th in YPRR (2.46).

Michael Thomas comprises 54% of New Orleans’ receiving XFP since Taysom Hill took over as starter in Week 11. Like Meyers, it hasn’t really translated, but it is encouraging. Hill has thrown 39 times, and Thomas was the intended receiver on 17 of those throws (43.6%). If Hill does anything through the air against Atlanta this week, it’s hard to imagine Thomas doesn’t post a big game. However, it’s a bit more difficult to imagine Jared Cook or Alvin Kamara come away as week-winners.

Similarly, Latavius Murray has out-played Kamara in back-to-back games. Over this span, Murray totals 36.1 fantasy points, 19.9 XFP, and 59 snaps to Kamara’s 16.7 fantasy points, 17.8 XFP, and 62 snaps. And I don’t think this is purely coincidental – at the very least it wouldn’t be the first time a dual-threat QB totally tanked the fantasy value of an elite pass-catching RB.

Here’s what we said about Swift a few weeks ago:

Here’s what we said about Gaskin a few weeks ago:

“Through the first 4 weeks of the season, Gaskin averaged 14.1 XFP per game, commanding a 53% XFP share of Miami’s backfield. Over the next 4 weeks (with Jordan Howard ruled a health-scratch in each game), Gaskin averaged 19.7 XFP per game with a 77% share of the team’s backfield XFP. For perspective, that’s the difference between ranking 21st-and 6th-best at the position. He wasn’t super-efficient on that good volume (-2.3) but was good enough to be ranked as a fringe RB1 each week. Unfortunately, he’ll be sidelined for the next 4 weeks with a sprained MCL.” 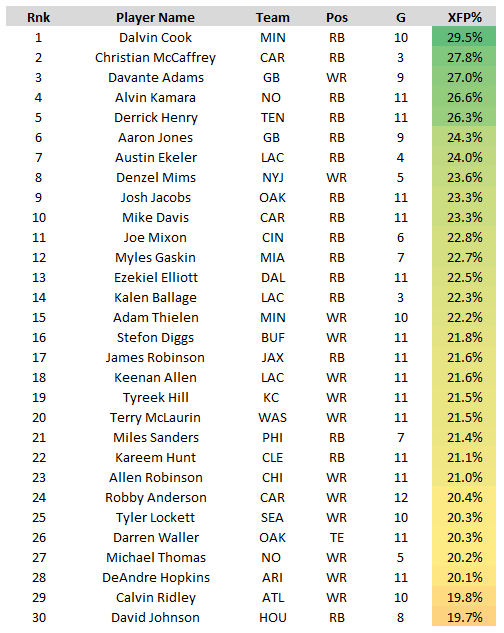