It was a great week to be a qualified strong safety. While a 3.9-point reduction in targeted passer rating (TPR) may only compute as 3.7% in the calculator, it’s a massive improvement considering that one week on the field altered the yearly number to that extent. Perhaps it’s simply the product of numbers leveling out. Regardless, qualified air yards per coverage snap (AY/CS) fell for a fourth straight week. Particularly inside the coverage responsibilities of outside cornerbacks. Wrap your head around a 21% plummet in that number solely from Week 11 play. But the average AY/CS declined for every position group with significant coverage responsibilities.

Pre-2020 scoring is still down and rushing efficiency actually improved slightly in Week 11 compared to the first 10 weeks. To bring everyone up to speed, passing attempt rate and efficiency on throws traveling 20 yards-or-more had been on a downward trajectory for five straight weeks since the rate reached its peak in Week 5. Week 11 provided us with some interesting data points. You can check them out for yourself in the updated chart below: 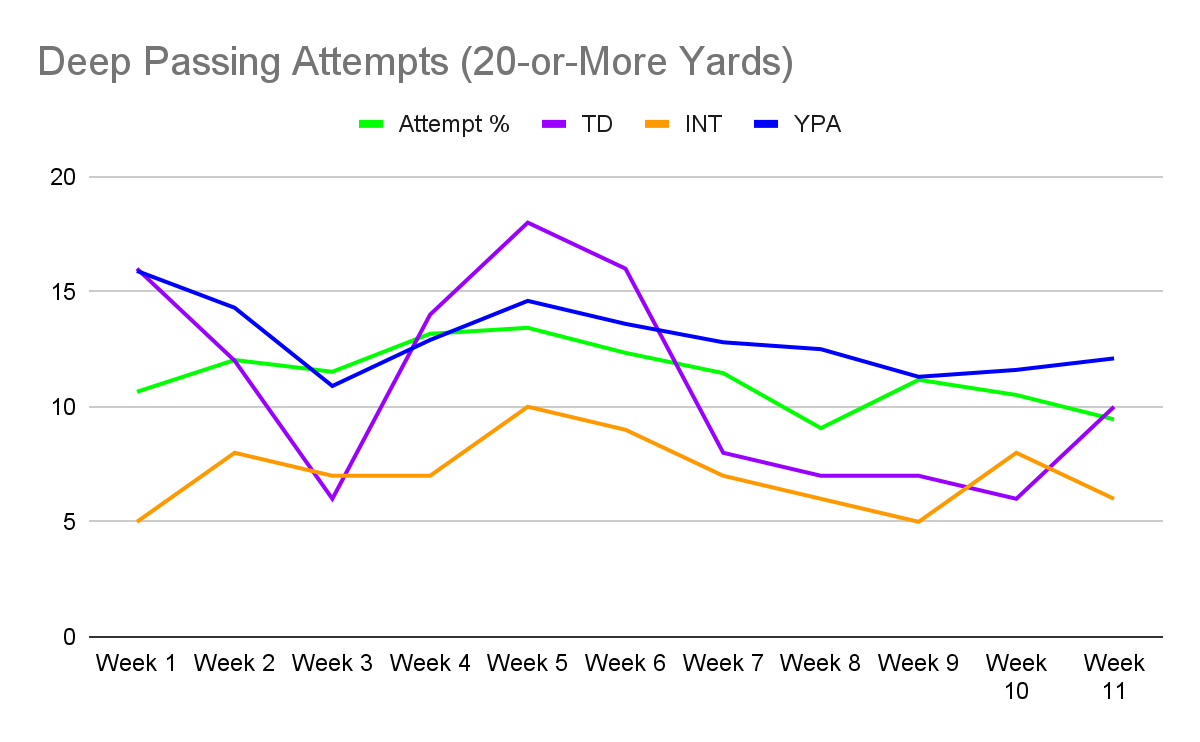 The deep target rate dropped, yet again, by 18%. However, those attempts resulted in 10 TDs vs. six INTs. That’s easily the top TD-to-INT ratio (1.67) since Week 6 (1.78). However, unlike Week 6 when an extremely healthy 13 QBs contributed a deep passing TD, Aaron Rodgers and Trevor Siemian combined to complete seven-of-10 attempts for 223 yards, and five deep TDs last week. With two QBs contributing half of the deep TD total and another decline in attempt rate, it’s safe to say that the issue is far from settled.

You’ll see a number of coverage metrics throughout this series. The following chart provides the full names for the acronyms and the average numbers for each position group through Week 11:

To magnify their importance toward processing the matchup data, familiarity with these abbreviations is key. The full names of the data points in the headers of the data table above will not be written out in full within the specific matchups. You’ll find the following acronyms frequently used whenever referencing defensive coverage statistics:

I hope everyone enjoys a Happy Turkey Day on Thursday! As always, we will have the pleasure of a trio of games to consume along with our cooked bird, stuffing, and pumpkin pie. Without further delay, let’s dive into a special Thanksgiving Day edition of Advanced Matchups.

Chicago Bears at Detroit Lions (Under 41.5)

Pittsburgh Steelers at Cincinnati Bengals (Over 44.5)

Carolina Panthers at Miami Dolphins (Under 41.5)

Atlanta Falcons at Jacksonville Jaguars (Under 46.5)

Individuals playing in their first games after being activated off IR typically provide a limited opportunity at depressed pricing. While FD got out in front of Kareem Hunt’s possible activation, his DK pricing as the RB26 is the lowest it’s been since Week 1. Value hunters will be all over Hunt this week, so we can expect to see him with a massive ownership number next to his name. The Ravens are more vulnerable to the pass, but Hunt is a high-level threat in both phases. He is squarely in the Cash/Single-Entry conversation with plenty of upside and offering moderate salary relief.

The guy from this matchup that I’ll be on in all game types is Mark Andrews. The Browns have sanctioned the 11th-most FP/CS this season on play action. That’s money in the bank when MANdrews is on the field. No other TE comes close to the 6.46 FPG that he draws on play action. That’s 43% of his overall average. In addition, Cleveland has also permitted the seventh-highest rate of deep receptions on play action. And Andrews is averaging the second-most air yards/game (78.4) and fifth-most AY/Tgt (10.3).

But the schematic matchup is even sexier. The Browns feature the fourth-highest rate of Cover 3 and the highest of Cover 4. In 39 games played over the last three seasons, Andrews has generated 0.51 FP/Rt against Cover 3 (the most), and 0.52 FP/Rt across from Cover 4 (second-most). If Andrews were on the main slate, I would have a ridiculous amount of money invested in him. He should have 100% ownership in every slate where he’s available.

If Baker Mayfield ($5.1K/$6.6K) wasn’t picking pieces of himself off the field, this would be an outstanding matchup for him against a Baltimore defense using the third-highest rate of man coverages, and ninth-highest of Cover 1. I want nothing to do with Nick Chubb ($8.0K/$8.0K) in this matchup. The Ravens also use the 10th-highest rate of Cover 6. Jarvis Landry ($4.8K/$6.2K) leads all qualified WRs with 0.66 FP/Rt during his last three campaigns when facing Cover 6. That said, he will see coverage from Marlon Humphrey. Again, if Mayfield were himself Landry and/or Donovan Peoples-Jones ($4.3K/$5.3K) would be obvious plays. DPJ had been dealing with an injury of his own. Now that he’s set to return to the lineup, Rashard Higgins ($3.3K/$4.9K), and Ja’Marcus Bradley ($3.0K/$4.8K) will slide back to their previous locations in the pecking order. The Ravens cleaning up their TE defense the last three games provides another factor working against Austin Hooper ($3.5K/$5.3K) and David Njoku ($3.1K/$4.9K) in this spot.

Rashod Bateman’s ($4.8K/$5.5K) stock fell with Tyler Huntley under center for Jackson last week. The statement game I had previously been waiting for seems less likely. That means it’s probably just around the corner. Now that Hollywood is rejoining the lineup after a one-game absence, Devin Duvernay ($3.8K/$5.2K) appears to be locked into the slot. The WR likely to see his playing reduced is Sammy Watkins ($4.4K/$5.4K).

Russell Wilson simply hasn’t been the same player since rejoining the lineup. Yes, Tyler Lockett registered much of the passing offense in Week 11 against the Cardinals. But I’m going to be on him for other reasons. Washington is giving up the 10th-most FP/CS and completions on throws of 20-or-more yards with play action. And Rocket is clearing 38% of his FPG average on play action. In addition, DK Metcalf will be dealing with the coverage of William Jackson III on Sunday. In the two games since returning to the lineup from a sore knee, WJ3 has only allowed a 5/37/1 combined line on 64 snaps in coverage.

I’m putting Taylor Heinicke ($5.4K/$7.3K) on ice for a week. Seattle has been a difficult test for QBs. And they have held opposing teams to the 10th-fewest FP/CS on play action. Heinicke is utilizing play action at the sixth-highest rate this season. The Washington skill player to target is Antonio Gibson ($5.7K/$6.6K). Seattle’s run defense is distributing the second-most FPG (30.3), fifth-most goal-to-go carries/game (2.7), and third-most red zone touches/game to RBs (5.6).

My days of chasing after J.D. McKissic’s ($4.9K/$5.3K) receiving upside are behind me, but Seattle is allowing the second-most pure receiving FPG to RBs (15.5). With consecutive victories, Washington still holds an 18% chance to make the playoffs. With that in mind, I’m anticipating that we’ll see Gibson’s workload increase this week at the expense of the recent touches provided to Jaret Patterson ($4.0K/$5.0K). If you can fit him under the cap, don’t let me stand in your way of adding exposure to Terry McLaurin ($7.2K/$7.4K). Just keep in mind that no WR has managed to eclipse 20 FPs against Seattle since Week 4.

Wait a week on Curtis Samuel ($4.1K/$5.0K). It’s not the best of matchups and we need to see his hamstring remain intact in an actual game. His return will kick DeAndre Carter ($3.5K/$5.6K) to the sideline. But Carter should be in consideration to leapfrog Adam Humphries ($3.2K/$4.9K) as the starting slot. Cam Sims ($3.0K/$5.1K) will relocate back to the bench where he belongs. The long-awaited return of Logan Thomas ($3.9K/$5.5K) is finally here. He’s several light years behind MANdrews as my preferred option on slates that include Monday Night Football. But he will face a Seattle defense allocating the 10th-most FPG to TEs this season (14.5).