For a refresher of the methods, read the 2021 Wide Receiver version of this article, as it’s identical this year.

The volatility scores can be thought of in two branches: physical performance/athleticism and injury risk. The first branch is best quantified by age since there’s a decline in athleticism with time. To reflect this aging process, each player was assigned 0.1 points for every year they were over the age of 28 (28 is the final year of the average top-10 pass catcher). Additionally, every tight end received a score of 1 for the three most common injuries of the position (ankle/hamstring/concussion) so the baseline score of every player is 3.

To further quantify each players’ risk, recurrence data from the medical research on NFL players was utilized if available (recurrence is defined as the percentage of players who sustain an injury more than once in a career). If a recurrence rate wasn’t available in the medical literature, it was calculated manually using the injury reports from 2016-2019. For example, about 20% of players coming off an ACL injury miss a game due to complications and is represented by 0.20 in the volatility score. A lateral ankle sprain recurs 10% of the time and is represented by 0.1 in the score, etc. To represent the fact that every injury is not created equally, a documented concussion within one year is scored as 0.2 due to the recurrence rate in that time frame. If within the last two years, the score is 0.1. Lastly, a clinical score was applied to adjust for certain scenarios that the cumulative score may not accurately reflect such as aging players with a higher score but minimal injury concerns. Again, this isn’t a perfect process.

To make the process more clear, consider Blake Jarwin as an example: 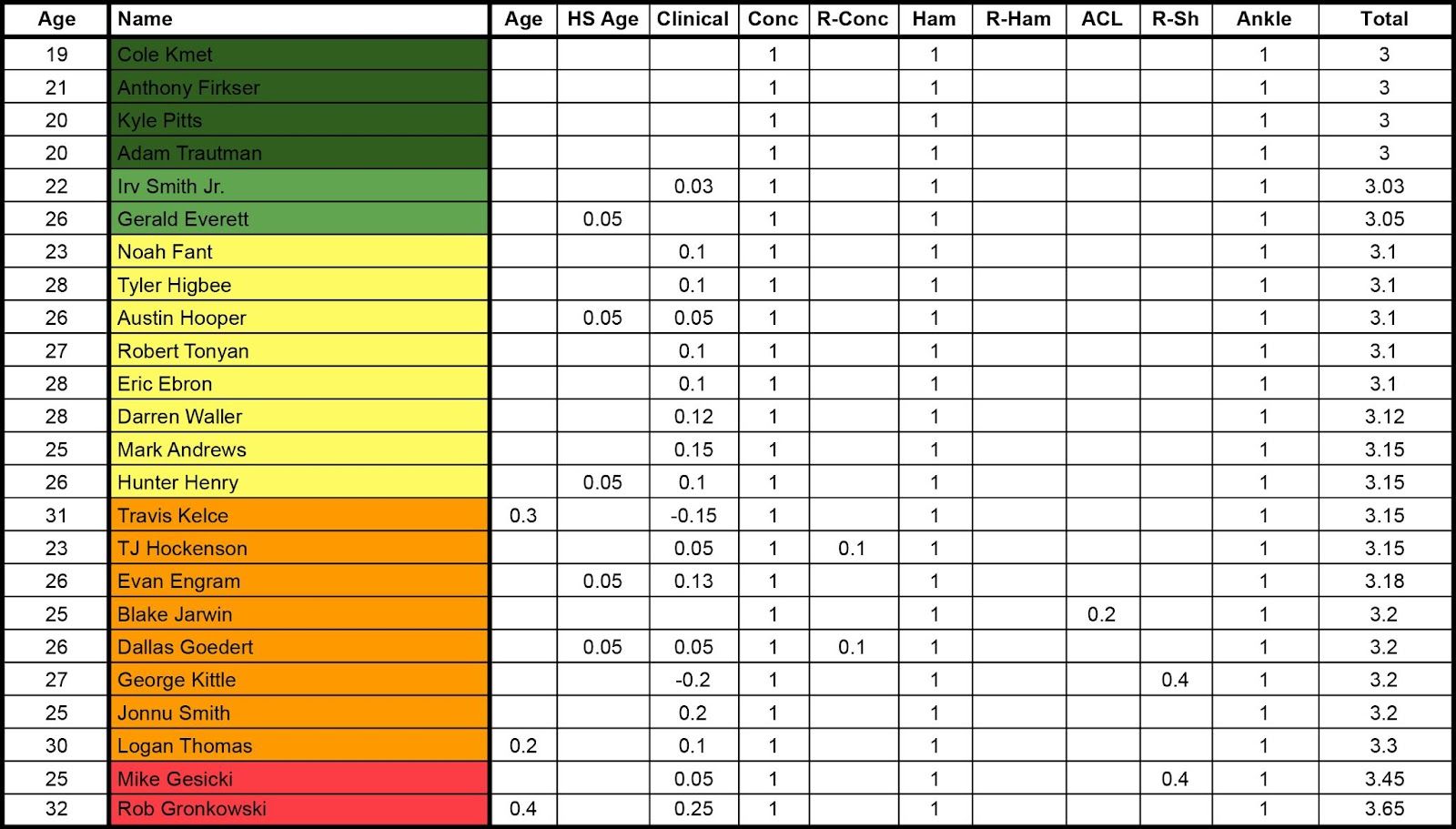 This year, the adjustment to the process for tight ends was intended to better reflect wide receivers as they are at risk for virtually the same type of injuries. However, because this is typically a onesie position that’s naturally shallow, it was important for the tiers to reflect true physical volatility without including panic. For example, since the beginning of his career Travis Kelce has had at least two surgeries on different joints, a concussion, and is aging at 31. For that reason, after two years, this process tends to forgive past surgeries on an individual basis and instead will be reflected in an overall “clinical” score. Because, who the hell is fading Travis Kelce? It sure as well won’t be me. Still, Kelce’s ailments from the past should still be reflected and they are as he is in the back half of Yellow Light tier. If each and every injury/surgery he’s suffered were included, it would ignore the fact that he’s been a pillar of durability as the best tight end in the game. Context matters and ultimately common sense should be applied instead of blindly following a score. The same could be said about George Kittle whose score skyrockets relative to his peers by the fact that he admitted to a shoulder dislocation a couple of years ago. However, similar to Kelce, who the hell is hard-fading Kittle? Nevertheless, Kittle is towards the bottom of the Yellow Light tier - he isn’t risk free. To summarize, relative risk (as opposed to absolute risk) matters especially for tight ends. The order of the Big Three is not a coincidence.

This small tier of players is, unsurprisingly, the youngest with the fewest exposures. There isn’t much to say here. I guess we could ask when the Kyle Pits Hall of Fame induction party is?

To begin The Yellow Light tier is a dude who brings likely the biggest injury discount to the table in 2021 - it’s Noah Fant. After playing through a high ankle sprain in 2020, Fant could never get right. I expect him to be healthier this year and hopefully will result in better performance. The most notable player in this subtier is obviously Darren Waller who, to my surprise, has actually stayed pretty healthy throughout the years. Mark Andrews recent scare with heat-related illness shouldn’t linger into the season, but past foot/ankle injuries and his type I diabetes are tangible factors working against this stud.

The second subtier of the Yellow Light tier starts with Kelce, who was discussed above. Basically, his age is something this model isn’t a fan of, resulting in a score that doesn’t reflect his true volatility before even considering past injuries. He’s earned a negative clinical value to reflect he’s not that risky but remains in the second half of this tier as he isn’t risk-free due to past surgeries and his age. It can’t just be ignored. As mentioned above as well, Kittle doesn’t come risk-free and is the riskiest of the Big Three but this score should only be used as a tie-breaker between him and another player in a similar tier of talent. Another top-talent at the position, T.J. Hockenson is in this tier due to a previous concussion, AC sprain, and foot/ankle fracture. He’s racking up that injury mileage fast but, again, tight end is thin. Don’t be too picky.

Lastly, to further reflect that tight ends are fickle in fantasy, there are only two Red-Lighters in Gesicki and Gronk. Due to chronic shoulder dislocations, Gesicki has earned this spot. Further, Gronk’s extensive list of surgeries/injuries and his age in addition to looking like dust at TE 13 on a ppg basis in 2020 places him squarely as the King of the Red Light tier in 2021.

In the end, football is a violent sport and any player who steps on the field is at risk for injury. However, after looking at the data and utilizing publicly available information, it’s possible to create a reasonable estimate of each players’ risk. Whether due to injury or physical capabilities, players in the Green Light and Yellow Light tier are associated with much less “risk” when it comes to performance in 2021 compared to the Red Light tier. Specifically for tight ends, don’t be too picky about health. However, understand that just because there are only a handful of predictably productive players at this position, that they come without risk.