The methodology to score the injury risk of receivers is very similar to calculations for running backs, but there are key differences to be aware of. As mentioned, injury “prediction” is a fool’s errand, especially in football, as just 2.3% of games are injury-free. However, there are basic orthopedic principles and medical statistics that help to estimate the physical health and performance volatility in NFL wide receivers:

The volatility scores can be thought of in two branches: physical performance/athleticism and injury risk. The first branch is best quantified by age since there’s a decline in athleticism with time. To reflect this aging process, each player was assigned 0.1 points for every year they were over the age of 28 (28 is the final year of the average top-10 wide receiver). Additionally, every receiver received a score of 1 for the three most common injuries of the position (ankle/hamstring/concussion) so the baseline score of every player is 3. To further quantify each players’ risk, recurrence data from the medical research on NFL players was utilized if available (recurrence is defined as the percentage of players who sustain an injury more than once in a career). If a recurrence rate wasn’t available in the medical literature, it was calculated manually using the injury reports from 2016-2019. For example, about 20% of players coming off an ACL injury miss a game due to complications and is represented by 0.20 in the volatility score. A lateral ankle sprain recurs 10% of the time and is represented by 0.1 in the score, etc. To represent the fact that every injury is not created equally, a documented concussion within one year is scored as 0.2 due to the recurrence rate in that time frame. If within the last two years, the score is 0.1. Lastly, a clinical score was applied to adjust for certain scenarios that the cumulative score may not accurately reflect such as aging players with a higher score but minimal injury concerns. Again, this isn’t a perfect process.

To make the process more clear, consider Odell Beckham Jr. as an example: 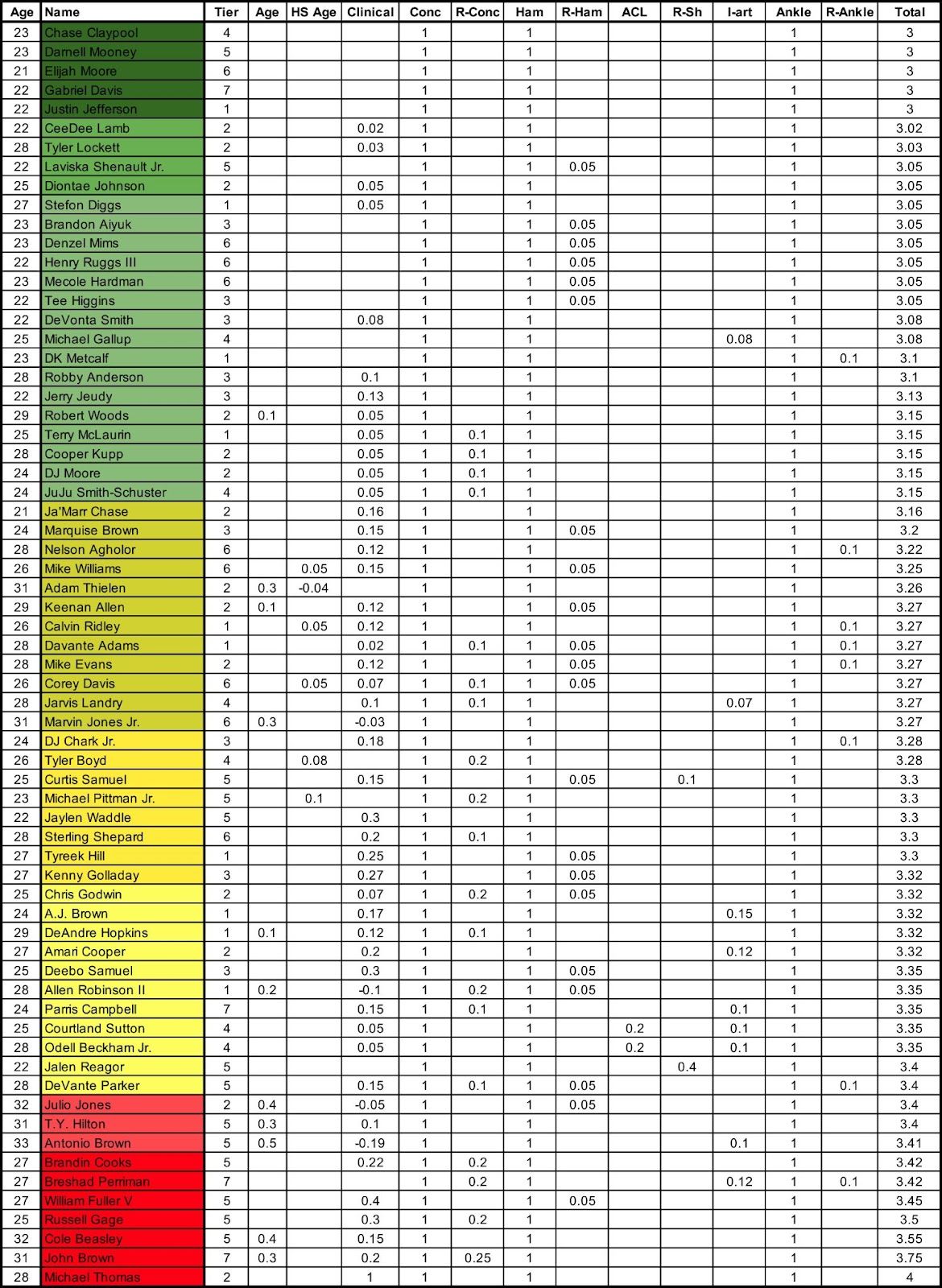 The final score represents each player’s physical volatility due to previous injury and overall athletic ceiling. Last year this article helped project the floors of A.J. Green, Julian Edelman, Alshon Jeffery, and Preston Williams This is of course not a fool-proof method and can’t predict situations like Michael Thomas, Kenny Golladay, Chris Godwin, and Courtland Sutton. There were also players in the “green light” tier who did finish 2020 with minimal injury issues, which represents the fact that the previous injury is the most important variable to reasonably project a player’s future health and availability. Think of this process as being sensitive, like a metal detector. Not specific, like a magnifying glass.

To my knowledge, these guys have no significant injuries or surgeries to account for. Naturally, it's a group of very young players with few NFL exposures. This doesn't make them immune to contact injuries like high ankle sprains or concussions, but their lack of history gives no concern for predictable injuries.

Very small concerns in terms of previous injuries — this subtier of Green Lighters includes freak injuries like Lockett's compartment syndrome, Viska's sprain thumb, and Diontae's random collection of injuries in 2020. There's no obvious reason to be concerned for this group.

This final subtier of Green Light players is full of veterans who have a random collection of injuries — more specifically hamstrings or a history of "minor" procedures in the past. Like with running backs, it isn't an alarming group but their history simply cannot be ignored.

This group of players starts the massive Yellow Light Tier. Chase is in this tier due to the fact that he took an entire year off from football and is potentially at risk for low energy sprains as his body ramps back up. You'll also see the likes of Mike Evans, Keenan Allen, Marvin Jones, and Davante Adams. Veterans with injury mileage that comes with the territory after years in the league. Calvin Ridley off a minor foot procedure, also lives here. Overall, this group shouldn't be concerning from a high-level perspective, but when in competition with a player in a similar non-injury tier, can be used as a tiebreaker.

Here's where some risk comes into play. Subtier 2 includes players like Boyd and Pittman who are only one year removed from a concussion. Additionally Curtis Samuel, at the time of this article, is iffy with a groin strain. Meanwhile Rookie Jaylen Waddle is reportedly still limping and heavily taping his postoperative fracture from last October. Rounding out this subtier is Hill who reportedly has "tendinitis" which can recur if not nipped in the bud now and Golladay who suffered a hamstring strain in camp. There's some tangible risk with this tier in the long term.

The third subtier includes two notable players Godwin and Robinson. Both had hamstring strains and concussions in 2020. Both injuries have a relatively high recurrence rate within one calendar year. Additionally, Hopkins is in this tier due to his vaccination status (which he inadvertently made known on twitter). This can be a touchy subject but ultimately it's a very tangible quantifying risk for potential missed games. Meanwhile Campbell (PCL), Sutton, and OBJ (both ACL) will need to get their sea-legs under them in the coming months. Deebo is in a "prove it" year with his health and it can't go without saying that Reagor did in fact dislocate his shoulder last season putting him at risk for recurrence this year. Lastly, Amari Cooper is still suffering from “inflammation” from a scope that should theoretically be cleared up by now. His history of foot/ankle issues is enough to drop him to the bottom of whatever non-injury tier you might place him in.

Here it is. The Red Light Tier. This baby tier can be called the geriatric tier. The first three players don't necessarily have an overly concerning injury history and a majority of their score is due to their age. For former elite receivers, aging gracefully isn't out of the ordinary but losing a step mid-season isn't off the table. When splitting hairs, Julio takes preference as Brown has a history of knee scopes and Hilton a history of soft tissue injuries.

Choose wisely from this final subtier. There are significant concerns that should not be ignored, but that doesn't mean a full fade is always necessary. For example, Fuller has a foot injury at the moment but I've written extensively that much like Deebo, he's in a "prove it' year for me in terms of his health. I'm willing to sprinkle him on teams in certain spots. Meanwhile, fan-favorite Brandin Cooks had yet another neck/head related injury in 2020 but tends to show great returns when active. Just keep in mind he's one just one concussion away. Lastly, Michael Thomas might actually be the only player who is a full fade. His defiance in 2020, the decision making in terms of surgery, and the overall cloudy outlook for New Orleans scares me unless he's a double-digit-round selection.

In the end, football is a violent sport and any player who steps on the field is at risk for injury. However, after looking at the data and utilizing publicly available information, it’s possible to create a reasonable estimate of each players’ risk. Whether due to injury or physical capabilities, players in the Green Light and Yellow Light tier are associated with much less “risk” when it comes to performance in 2021 compared to the Red Light tier.