Week 5 already?!? Week 4 wasn't nearly as bad for injuries as Week 2, but there were some big ones, including Nick Chubb, Austin Ekeler, and Julio Jones. Speaking of Falcons wide receivers, what happened to Calvin Ridley? I'm assuming he was banged up and just out there as a decoy.

Joe Mixon finally had a breakout game, putting up 151 yards rushing on 25 carries with 2 TDs and 6 receptions for 30 yards and another TD. Due to poor performances the first 3 weeks, his cards didn't see a jump; in fact they're still very low compared to where they were a month ago. Although Joe Mixon cards didn't see big gains, let's see which cards did.

Reminder: We love StarStock.com’s vault of over 200,000 cards. If you want just one resource for options, purchasing, and organization, they’re the site to check out. Images and stock prices courtesy StarStock.

There wasn't a hotter card, at one point, this offseason. Once it was announced Tom Brady was leaving New England to join the Tampa Bay Buccaneers, people in the hobby rushed out to buy Stidham speculating he'd be the new starting QB of the New England Patriots. Obviously, Cam came to town and quickly put an end to that speculation. 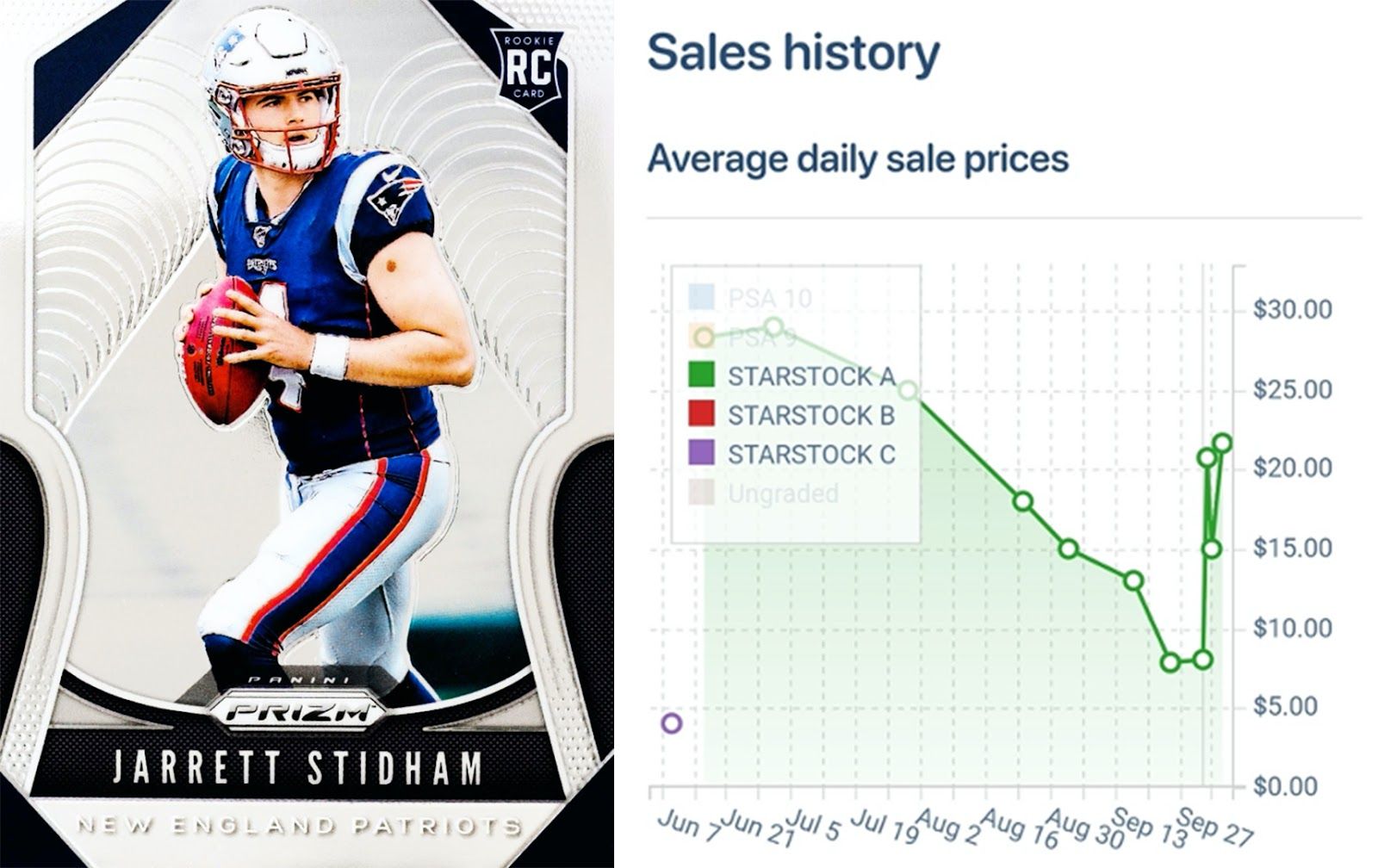 The sales chart tells a serious story. Cam signed with the Patriots at the end of June. His prices took a nosedive up until it was announced Cam had Covid. A few sold right after news broke. When Hoyer was announced as starter, with Cam out, Stidham's prices went down again. After entering the game Monday night and throwing a TD, his prices rose again. If Cam misses this week again and Stidham is the starter, his prices may rise a little more.

The hobby pretty much left him for dead coming into the season. Understandably so, it was two years since anyone saw him on a football field, and he was in a crowded backfield. But there had to be a reason Shanahan has kept him around, despite being constantly hurt. 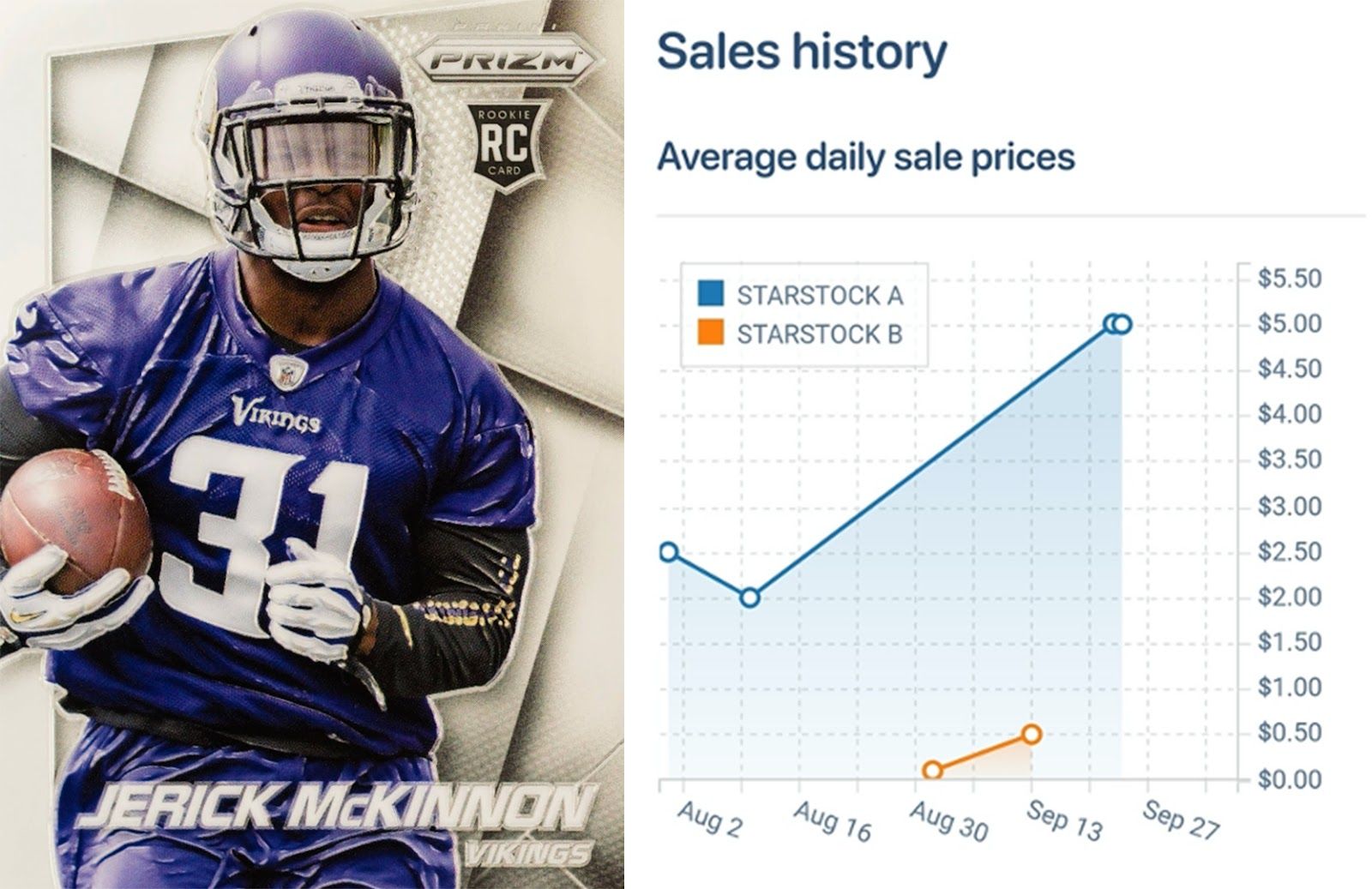 Did you realize McKinnon has a TD in every game this year? It's true. He's fun to watch, the dude is explosive, and at any point he can break off a big play. $5 for his Prizm certainly isn't going to be the peak, in my opinion, as long as he can stay healthy. But based on his past, we have to be wary.

Man, it was only Week 4 and the Broncos were already on their 3rd string QB. The whole team has been plagued by injuries early, and no position has been worse than Quarterback. 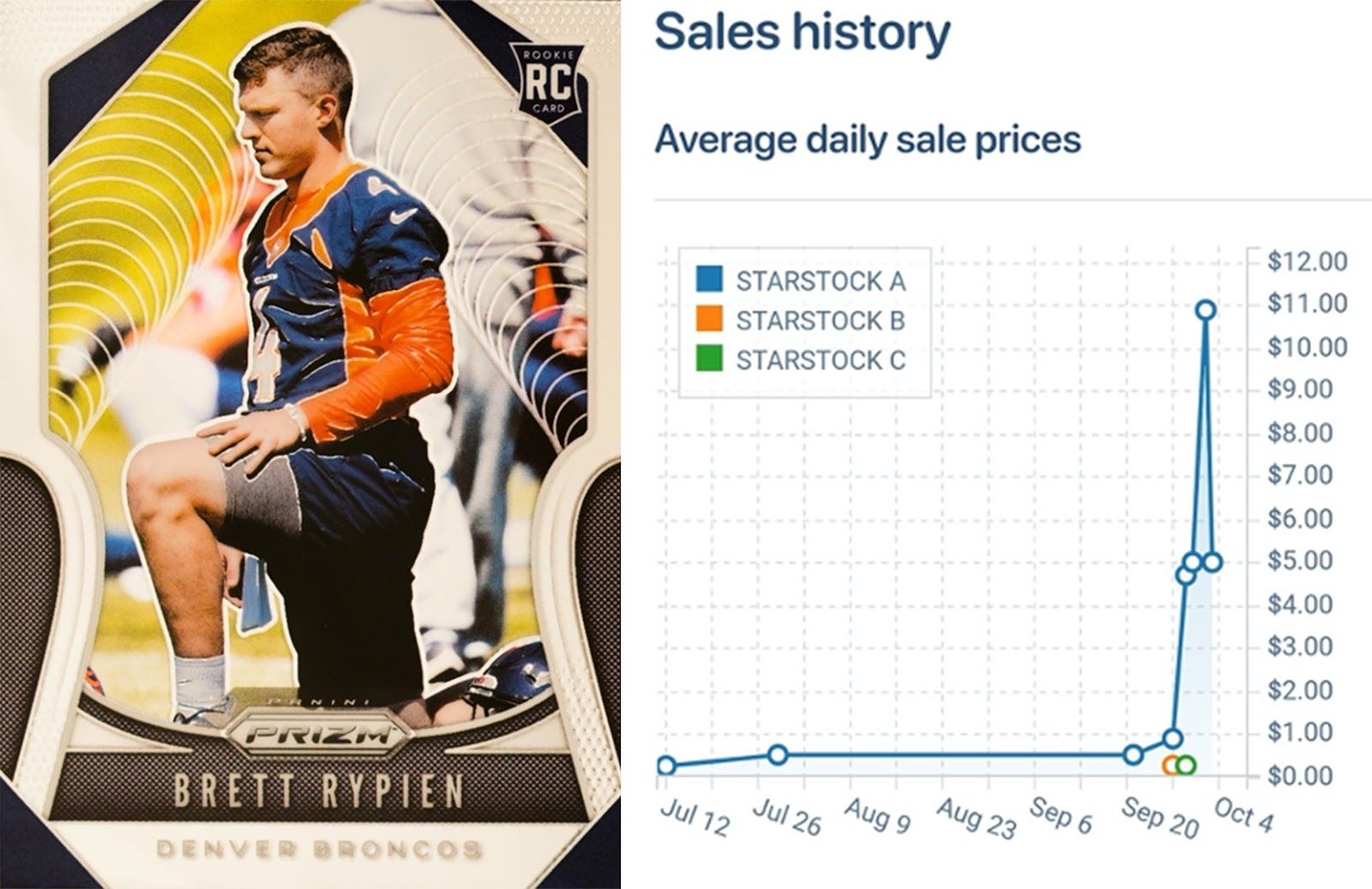 His prices instantly spiked when he was announced the starter. And sales continued to rise up until Sunday. His Prizm cards went from selling under $1 to over $10 at the peak, that's over 1000% ROI! Surprisingly after that performance, a few still sold for $5 after the game. 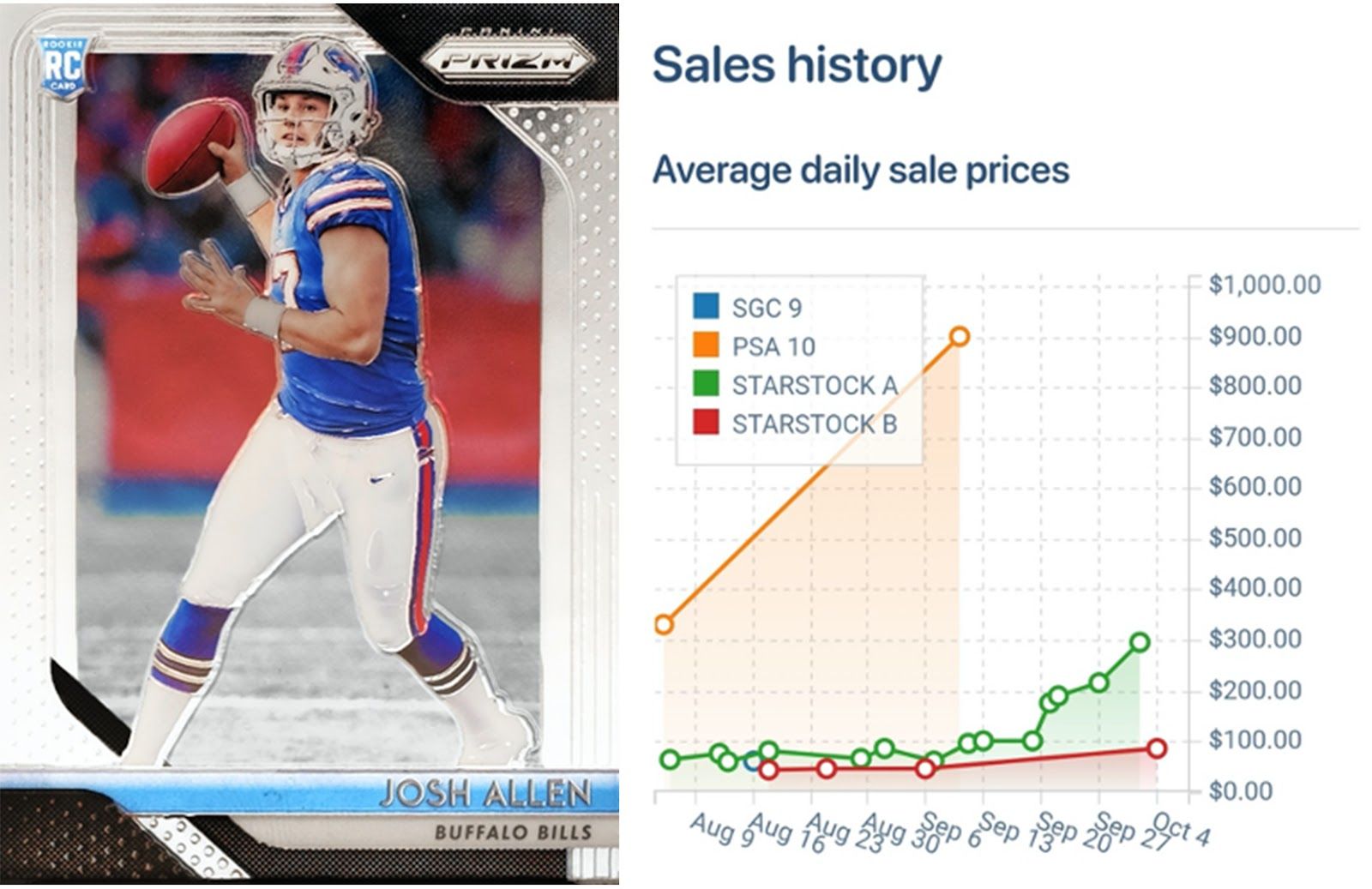 Josh Allen cards continue to rise, as the Bills got another win. His Stock A cards rose from $200 last week, to $300 this week. It's looking like he has the potential to be this year's version of Lamar Jackson and Patrick Mahomes in the hobby.

The benching of Dwayne Haskins wasn't much of a surprise, as Ron Rivera hasn't exactly been singing his praises this year. It was somewhat surprising how early in the season it happened, and the fact he dropped to number 3 on the QB depth chart. Kyle Allen wasn't exactly a stud last year on the Panthers and might not make it very long into the season either. 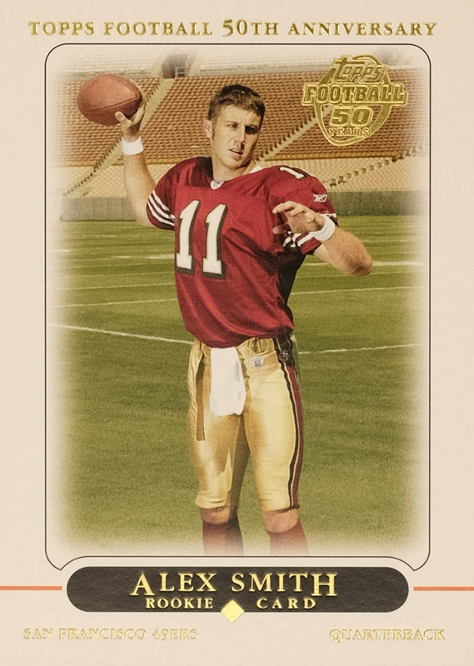 What an incredible comeback story it would be if Alex Smith makes it back to being a starting QB in the NFL. His prices are extremely low right now. There are lots of 10 of this card on eBay for under $25 Shipped. If you think Smith has a chance of playing again, pick up some of his Topps or Topps Chrome. 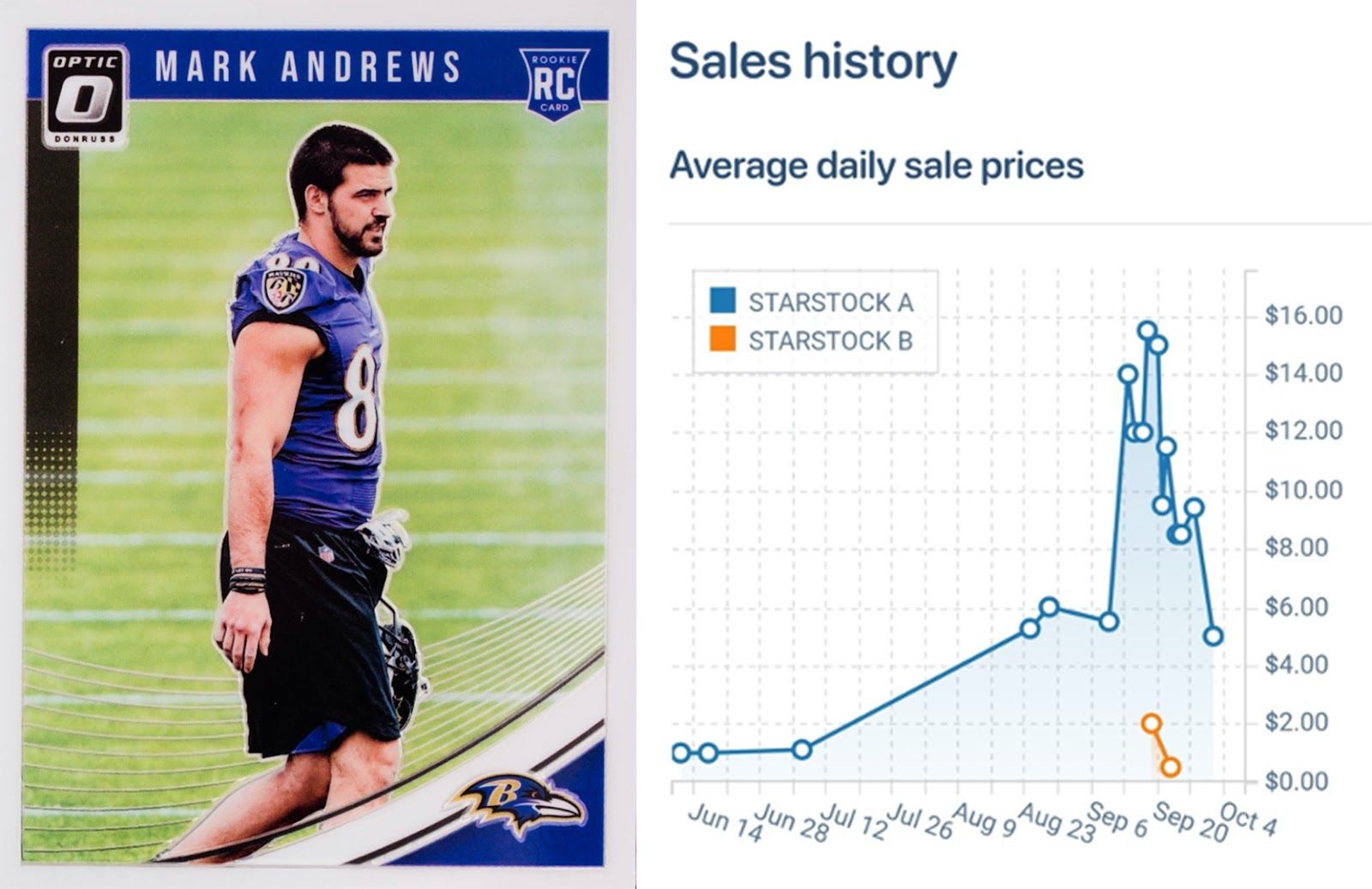 Wait, what? Didn't Andrews catch 2 TDs on Sunday? You'd think, looking at this chart, Andrews has been terrible or got hurt for the season. Andrews is only on pace for 60 receptions this year, but that's more than enough opportunities for him to put up points.

Sometimes you catch trends when you can see things as obvious buys. This would be one of those to me. We know what the ceiling can be, and right now is almost the floor. 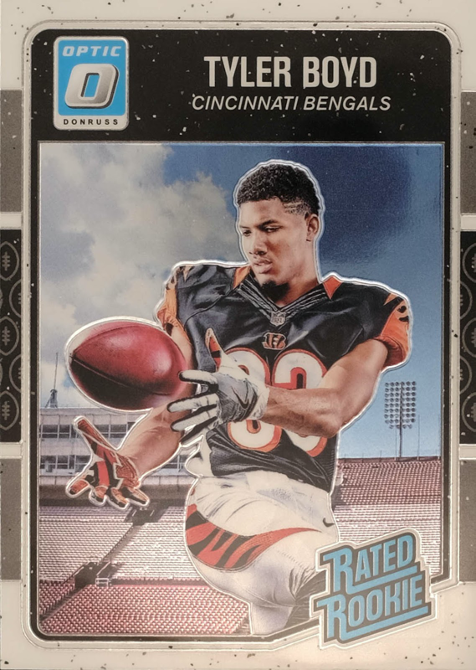 Boyd is the number 1 receiver on the Bengals (Sorry AJ Green), a team that is top 5 in pass attempts this year. I not only want Boyd on all of my fantasy teams for the rest of the season, I want his cards in my portfolio.

His cards still seem underpriced to me. You can buy this card on Starstock for under $10. I think there's plenty of room for these to grow as the season goes on. 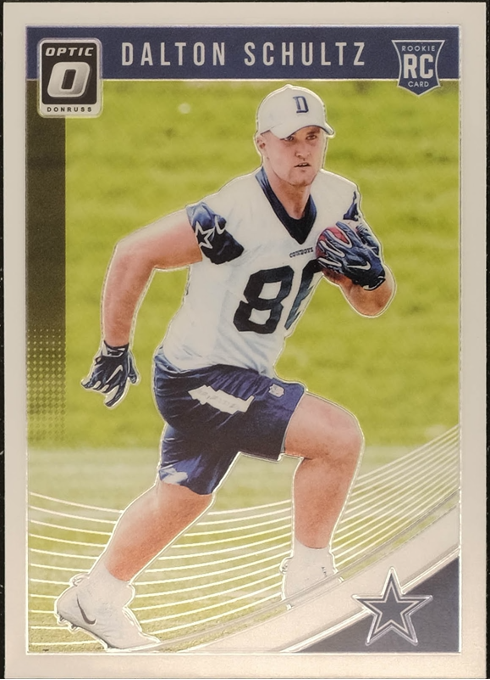 I want all the pieces of this Cowboys offense as I can get. Dak has thrown for over 450 yards in 3 straight games. If you don't realize it, that's a pretty absurd stat. Schultz started off shaky, dropping a few passes when he came in to replace Blake Jarwin, but has since filled Jarwin's shoes quite well.

Boxes of Origins are one pack of seven cards. You will get one on-card Autograph, one Rookie Patch Autograph, and one relic. They're selling for around $275 per box. This is a collector’s first opportunity to get on-card autographs of players in their professional uniforms.

Origins is a hobby-only release, meaning you will not be able to buy these at Walmart or Target. This is not a product I necessarily recommend buying.

Boxes of Absolute contain 15 cards. You will receive three Autographs and two Relics per box. The price tag on Absolute boxes is around $350 per box.

Absolute will also have a retail release, but the product has not hit shelves yet. If you find it at Walmart or Target, pick some up. Probably not flippable sealed, but if you want something to rip, it's cheap. I do not recommend buying hobby boxes of this at that price tag.

If you are interested in learning about cards, reach out in Discord. I'm there to answer any questions you may have about the hobby.