2022 is the year you stop winging it on draft day and adopt a data-driven approach to assembling your seasonal fantasy football team. You can do this. I believe in you.

Circling a few names off of a set of rankings or draft guide is what every other casual player in your league is still doing. It’s time to let the data do the work so you can gain the edge so a calendar year from now you can be the one dishing out the flexes to your college buddies.

Over the past couple of years I’ve been analyzing the amount of fantasy match-up wins each player tends to provide team managers in a season –Wins Above Replacement. With two full years of data at hand, I compared the two most contentious draft strategies in the game:Zero RB vs Robust RB. While Robust RB proved to be the best strategy in 2020, Zero RB won the edge in 2021. In this edition, I used the same simulation approach to put other draft strategies to the test. These strategies include going all in on a top (Hero) QB, Hero-RB, fading QB, and finally going big on top players at three positions. At the end I’ll bring the Zero RB and Robust RB findings to reveal which draft strategy you should prioritize this fall. Let’s get at it.

I used full-PPR for this analysis with 4-point passing TDs with a flex-9 starting lineup (QB/RB/RB/WR/WR/TE/FLEX, K, DST).

A list of all players’ average auction value and WAR was compiled for both 2020 and 2021. Each simulation was designed to randomly select starting-seven teams (QB/RB/RB/WR/WR/WR/TE) that spent between $170 and $200 based on rules that define each strategy. For example, the late-round QB strategy removed all top-12 ADP QBs from being selected forcing the simulation to select a lower-priced option thus allowing higher priced players in other positions. The strategies I selected for simulations are the following:

This is by no means an exhaustive list of strategies nor are the parameters I chose hard-set, but this should be enough to provide some signal as to which method is optimal. Before getting to the simulation results, here are a few examples of simulated teams from each strategy:

The graphs below chart average WAR for each year provided by all seven starters from each simulation strategy (y-axis) by the amount of auction dollars spent (x-axis). 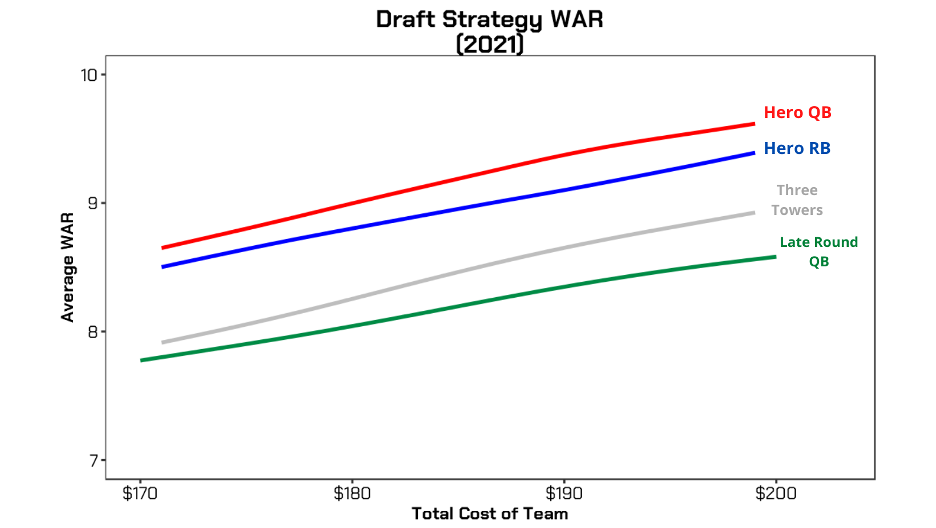 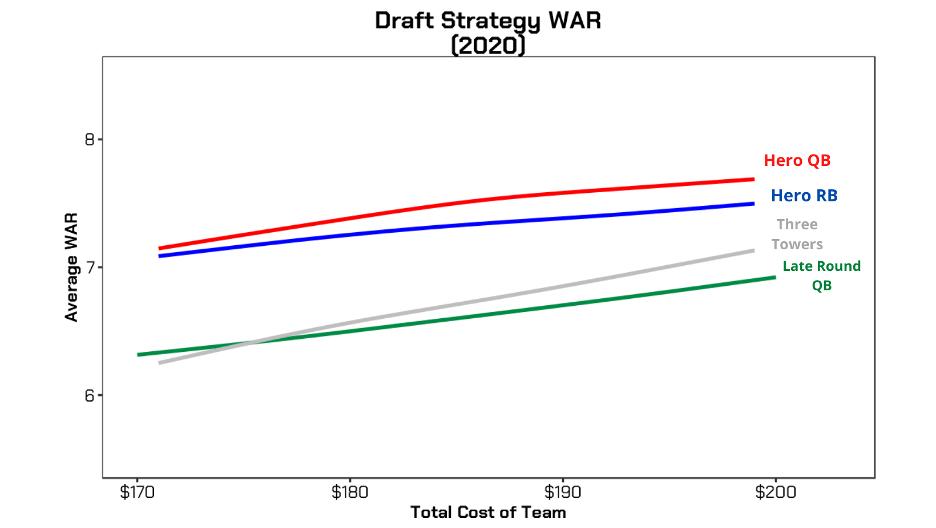 The simulations showed consistency in the rank order of strategy success across both seasons. Of the strategies simulated, the “Robust QB” or “Hero QB” or whatever you want to call it, was the most optimal — not only in 2021, but in 2020 as well. On the other hand, it only makes logical sense that “Late Round QB” was the least optimal in both years.

These results indicate that top-shelf QBs are undervalued and the “don’t take a QB too early” mantra you continue to hear from analysts every year is no longer accurate. It definitely used to be – but those days are gone. Top-taken QBs in recent years are much scarcer. Patrick Mahomes, Josh Allen, and Kyler Murray — despite Murray’s injury issues in 2021 — produced exceptionally and Mahomes, Lamar Jackson, and Dak Prescott — despite Prescott’s injury issues in 2020 — also gave managers an edge. This doesn’t mean that you’re guaranteed to select a good QB. But, to steal a poker term: the pot odds are in your favor.

“Hero RB” was next in simulation success which I loosely defined as taking one RB from the top-10 drafted RBs in ADP. The next strategy after that was the “Three Towers” approach in which you prioritize a top-3 ADP WR, RB, and TE. Finally, the late-round QB strategy came in dead last.

One counterpoint here is that the simulations don’t account for weekly streaming. That’s true! However, QB streaming isn’t what it used to be. The following list contains what I’ll call bona fide QB streamers from 2021. To be eligible, they must not have been a top-12 started QB the prior week. This is a somewhat crude method, but it’s the best way to figure that this player would be available on the waiver fire. Also, the player must have been conventionally viewed as a streamer option. To prove this, I filtered the eligible QBs further by those with a weekly start percentage that increased 10% or more from the prior week in ESPN leagues.

First, you’ll notice that only ten QBs qualified – indicating that QB streaming isn’t that common of an approach anymore. And while there are a couple hits on this list, the average comes out to just 16.9 PPG. While this won’t kill your team, it’s getting trucked by the upper-end QBs of recent years. Furthermore, you’re just not getting any value.

Below, I graphed out average QB points per week by start percentage rank. For example, If Mahomes was the most-started Week 1 QB at 98.9% and Josh Allen was next at 98.0%, they would rank 1 and 2 of Week 1 respectively. Each rank across all 17 weeks of 2021 is grouped and averaged below with the dark points representing the average, the blue line representing the trend line and the gray shade representing the confidence interval (basically we can assume the true average has a 95% chance of being located somewhere in this zone): 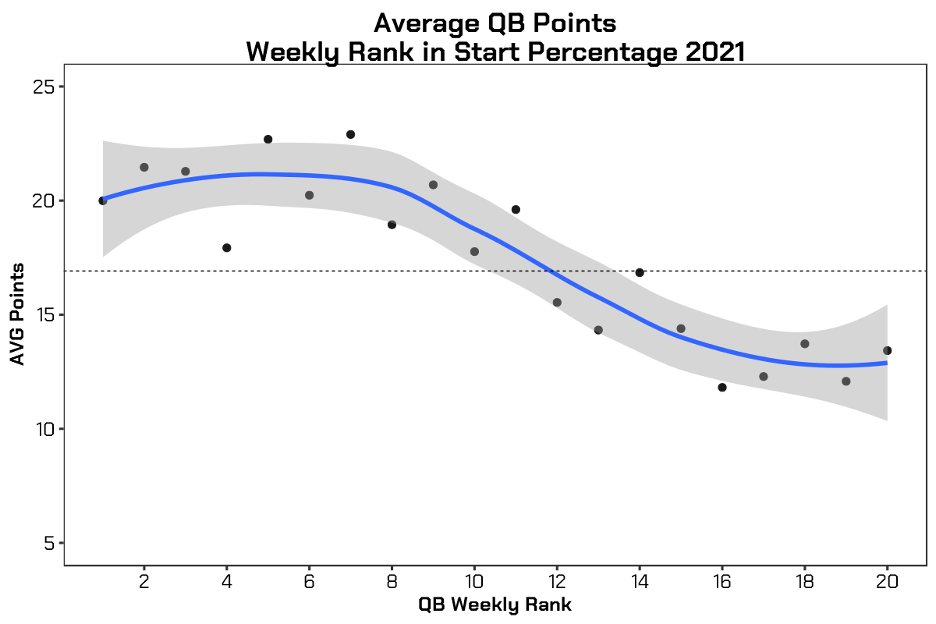 Finally, the gray dashed line represents the 16.9 points provided by true streaming QBs on average. Using the gray confidence interval, we can be reliably sure that a streaming QB produced somewhere between the QB10 and QB14 production. This is… not great.

How Does this Compare to Robust RB and Zero RB?

The big question to answer now is where these draft strategies compare in relation to the two most talked about styles: Zero RB vs. Robust RB. Below I added the trend lines for both Zero-RB (yellow) and Robust-RB (orange) to the rest below: 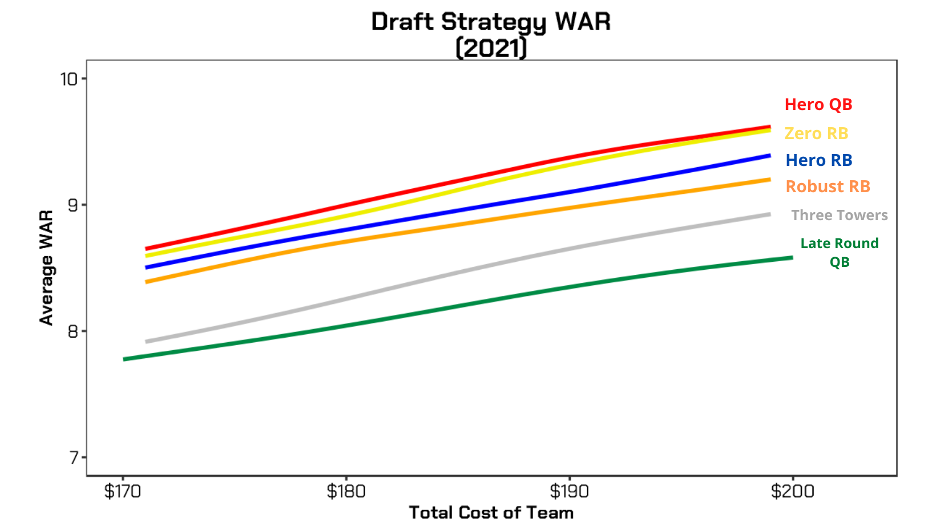 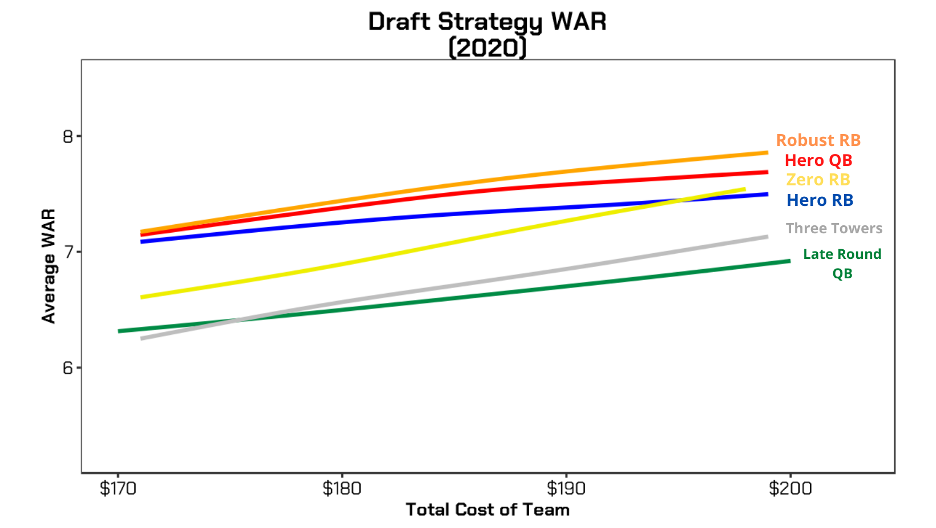 The yellow “Zero-RB” strategy falls just a shade under “Robust QB” in 2021, but was less successful in 2020. Meanwhile, the orange “Robust RB” method was the #1 performing strategy of the bunch in 2020 before dipping to fourth place in 2021. This seems to indicate that both of these draft strategies might be a bit more volatile in nature than the rest. Or was 2021 an outlier year? Maybe a few years down the line will bring more clarity on the true hierarchical standings, but as it stands now, I think the safest bet is to put your draft focus on a top-3 QB, as I argued here. The market is simply still behind on this. Lamar Jackson was the most expensive QB in 2020 at $24 and Josh Allen cost the most in 2021 at $29, with Mahomes just behind him at $28. It remains to be seen what 2022 will look like but if it’s anywhere near what it was in 2021 you can rest assured aiming for a top-QB is a surefire home-run strategy.

The inefficiency in the QB market is the single most important gap you can exploit in 2022. Listen to the simulations. Before you go circling players you like because you think “this is his year” or whatever, make sure you have the correct position circled first so you know where to focus your draft day investments on: quarterback.

After running thousands of simulations randomly assigning teams based on different draft strategies, the optimal strategy (out of four broad strategies) in 2021 was to take a top-3 ADP QB as a priority and fill the rest out from there. This strategy was second most optimal in 2020 — just slightly trailing Robust RB. Meanwhile, a late-round QB strategy was dead last in both years, demonstrating that QB is a much more important position to nail down in today’s game. Yes, I’m talking about single QB leagues.