You’re going to want to sit down for this one fellow Bell Cow-RB drafters: Zero-RB was the better draft strategy for fantasy football PPR seasonal leagues in 2021.

There it is. Band-Aid ripped off. The age-old debate between Zero-RB and Bell Cow-RB has waged for years without a way to quantify the impact of one vs the other. Enter fantasy football wins above replacement (WAR). WAR estimates the percentage of fantasy matchups a manager likely won in a 17-game fantasy season solely due to a particular player OVER a replacement-level player at that player’s position. This creates a metric comparable across positions in a way points never could.

But WAR alone can’t tell us that Zero-RB was the optimal draft strategy based on the hindsight of your individual team results. Just because you drafted Davante Adams and Cooper Kupp this year doesn’t mean Zero-RB was optimal vs Bell Cow-RB any more than me drafting Jonathan Taylor and Najee Harris at the turn (humble brag). That’s what Twitter is for. We didn’t know before our drafts which players would pan out and which wouldn’t. The point of this article is to remove this hindsight bias of any individual player’s 2021 output and test both Zero-RB and Bell Cow-RB strategies through literally thousands of randomly simulated fantasy teams — giving us all the hits, misses, and everything in-between.

The goal of the simulation process is to balance the pros and cons of each strategy to see which yields the higher overall expected value in the long run. Zero-RB simulations were designed to pass on highly sought RBs that command steeper prices. In doing so, such teams avoid the inherent injury risk skewed towards RBs. For some Bell Cow-RB simulations, spending big on Christian McCaffrey, Saquon Barkley, or Derrick Henry especially hurt considering these simulations were left with less funds to invest in the rest of the team. On the other hand, other Bell Cow-RB simulations taking Jonathan Taylor, Najee Harris, Austin Ekeler, Joe Mixon, etc. will likely flourish. The idea is that since no one knows which players were going to be winners or losers before a draft, the average of all simulated teams will prove which strategy was the plus-EV move.

25,000 simulated teams were created for each strategy. Each simulated team consists of 1 QB, 2 RBs, 3WRs, and 1 TE to model a typical flex-9 starting squad. Note we are kicking out kickers and defending against defenses due to their perpetual randomness. We also leave out bench players because WAR presumes each player is a starter across all 17 weeks and already corrects for games missed for any reason.

EXAMPLE: Derrick Henry played only eight games in 2021. The simulation presumes fantasy managers who drafted him were left plugging in a replacement-level RB in their nine other matchups. The expected production from this replacement-RB is already figured as part of Henry’s WAR. While holding a WAR of around 4 after Week 8, it fell to 1.8 at the end of the season after plugging in nine weeks of replacement-RB value.

Below is the pool of players who were randomly selected into simulated teams. For a simulation to be qualifying, it had to have spent at least $150 on the seven starters. No realistic fantasy team would likely pay less. For programmatic reasons, I removed all players with less than a $5 price tag as these bargain bins made it much harder to simulate teams meeting the $150 threshold. Even so, there are more than 1.68 billion possible simulation combinations with this pool: 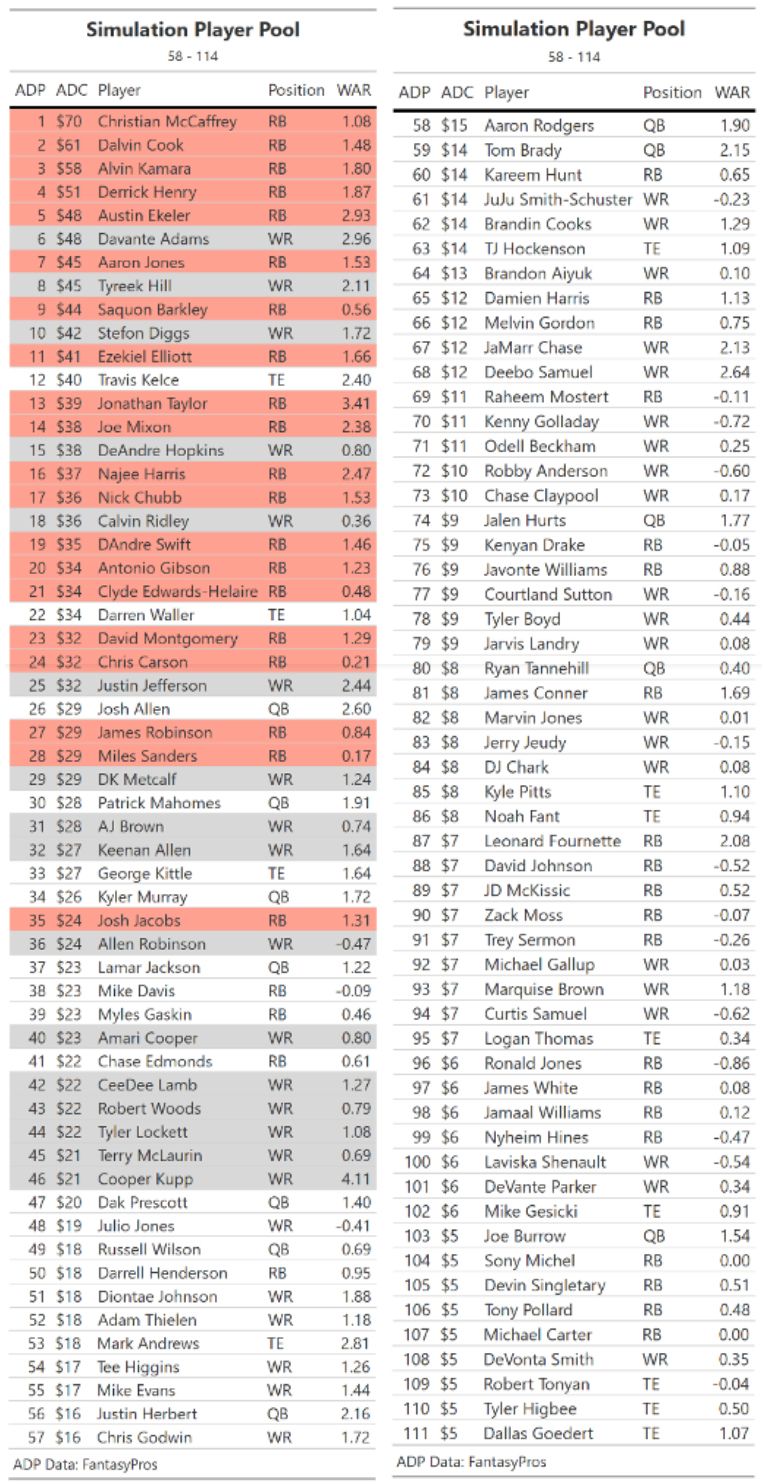 There’s always going to be room to quibble over what exactly a Zero-RB vs Bell Cow-RB strategy consists of. And while there will certainly be limitations in my approach, I think a signal shines through. The following rules for each strategy were employed for this analysis:

Let’s get a glimpse of a few sample simulations from each strategy to get a better feel.

To make sure there wasn’t a bias of one strategy tending to spend more than the other due to rule constraints, the results for each strategy’s 25,000 simulations are graphed below by money spent per team. 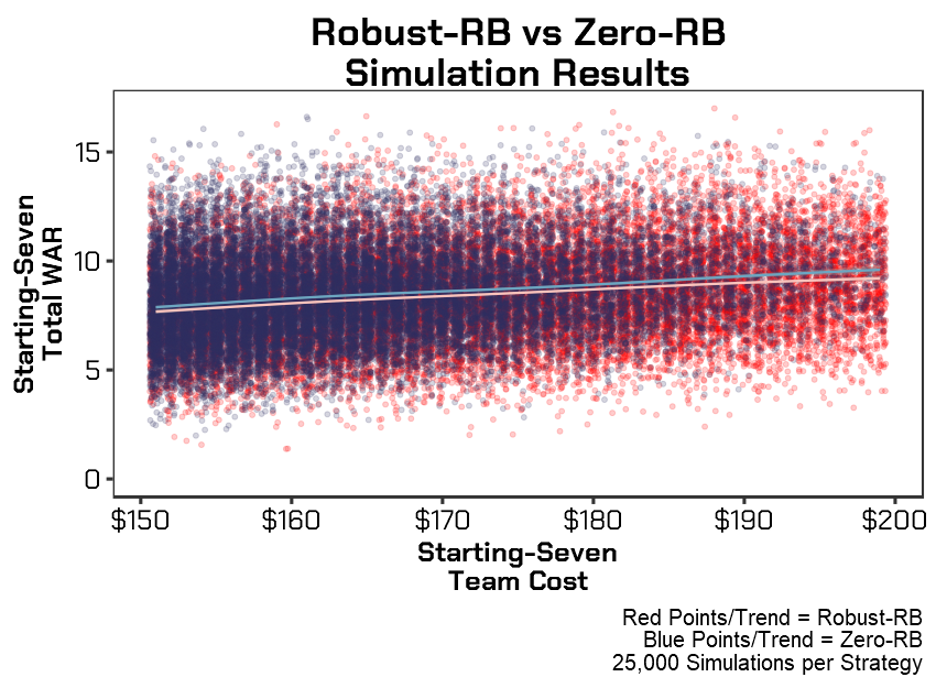 While the trend lines are close, the difference in strategies is significantly different. Zero-RB was plus-EV compared to Bell Cow-RB in 2021. Good game, team Zero-RB: you won this year.

The variance in individual team results is clear from this graph. Some Zero-RB teams and Bell Cow-RB teams hit it out of the park, others failed miserably, and most were somewhere in-between. This variance is why it’s important to look at the trend lines as the indicator of which strategy provided a better likelihood of winning more fantasy games.

But hold up! In true goalpost-moving fashion, when data reveals my strategy wrong (I am a staunch Bell-Cow drafter), I couldn’t help but wonder if this was just a one-year “anecdote” or “blip.” So, I repeated this all for the 2020 season to see how the results compared. The only exception is that I reduced the number of simulations to 10,000 per strategy for time’s sake. Here’s how the same process played out in 2020: 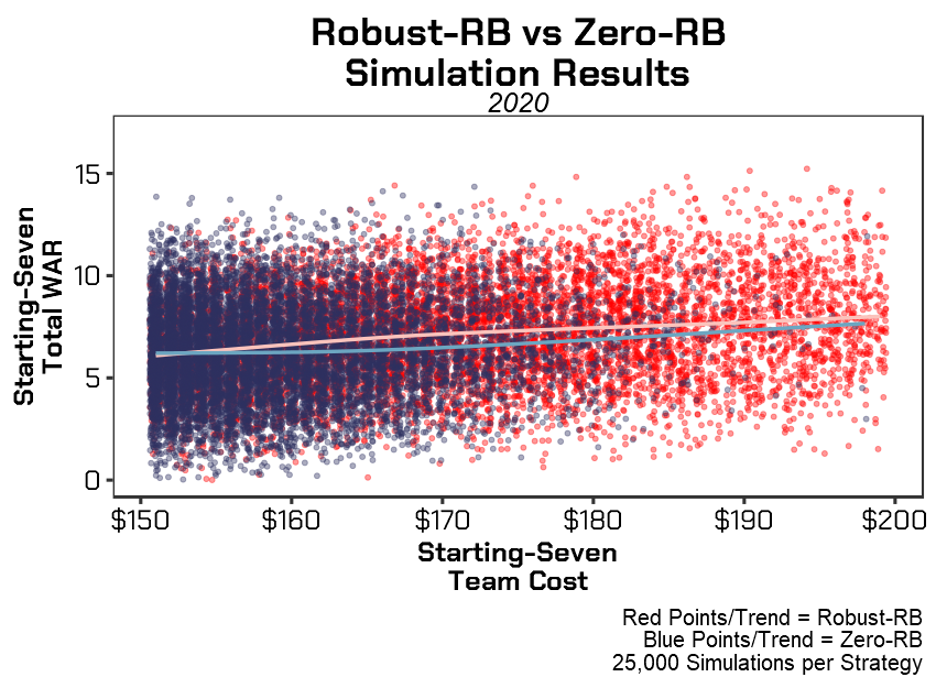 The light red RB trend stands clearly over the blue Zero-RB counterpart, validating us Bell Cow-RB truthers in 2020. However, I’ll note that it was harder to find as many simulations formulating Zero-RB teams for teams with higher costs which explains the lack of blue scatter points at higher team draft costs. (The same issue occurred in the 2021 output, but the increase in simulations hides it a bit better.)

Bottom line: Bell Cow-RB proved to be the plus-EV strategy in 2020.

Ultimately, this is the question that matters. If Bell Cow-RB was the optimal draft strategy (at least as I defined in this article) in 2020 and Zero-RB won out in 2021, which approach is most likely to be the plus-EV play in 2022? Since I only have two years of WAR data to go off from, I can’t expand the simulation analysis on years prior to 2020. But I can look back at recent history to get a feel for how much more injury-prone RBs tend to be relative to WRs. RBs from the top-5 in ADP averaged playing a total of 53 games in a fantasy season while top-5 ADP WRs averaged 84 over the last two seasons. That’s a 31-game difference… just over six per player, which is massive.

Compare this to the four years prior (2015 – 2019), when RBs averaged 61 games vs 70 for WR (under two per player). While injury risk is definitely higher for RBs, this suggests that the last couple of years might be exaggerated from what should be expected. And despite this, RBs still were able to win out in 2020.

At the end of the day, it’s still unclear if either strategy is predictively better for 2022 than the other. And the degree that injuries played is not clear. But signal exists to at least play Monday Morning Quarterback after the season through the power of 50,000 simulated teams battling it out in WAR. I’m already excited to write the 2022 version next year.