The playoffs are around the corner and week after week top name RBs seem to fall like they just got off the boats at Normandy. Barkley, McCaffrey, Henry, Jones, Kamara, McCaffrey again.

When does this madness end?

For many managers, this might be reason enough to consider fading RBs early in future drafts. I can certainly understand the feeling, but I think it’s a mistake. A big one. The goal in fantasy football is to win it all. And as Fantasy Points’ Scott Barrett has repeatedly laid out, winning is driven by league winners. These league winners are more likely than not going to be RBs and 2021 is showing to be no exception.

Despite how injury prone the RB position continues to be — with top names like McCaffrey and Henry lost for the year — the best bet to win leagues is to get off the boat and storm the beach. By this I mean, embrace the danger that comes with taking RBs in the early rounds in hopes of finding the league winners who undoubtedly reside. In the grand scheme of things, we are seeing exactly what you expect to see of RBs in the draft: there are winners and losers and you don’t get to know which will be which will get hit with the injury bug.

I’ll show you what I mean using the wins above replacement (WAR) methodology. Below lists players in order of ADP right before the 2021 season started with seasonal on-pace WAR for each player color coded by position: 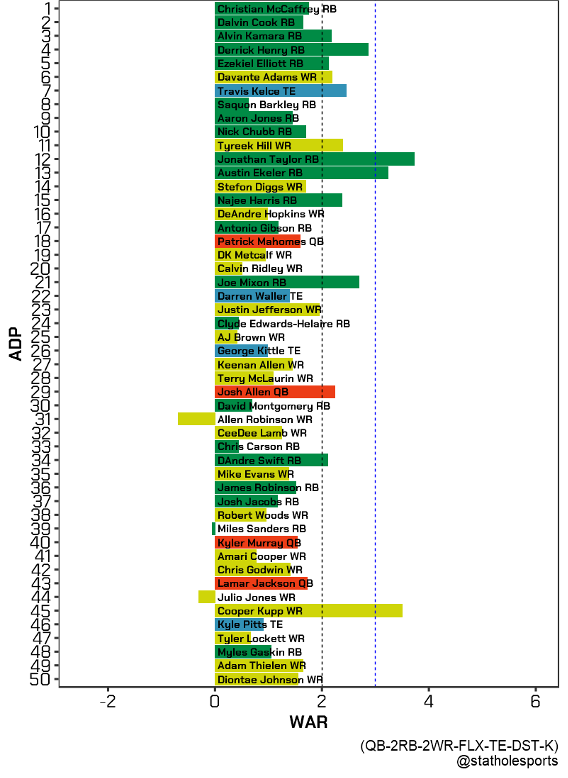 The two vertical dashed lines lay a mark for players with a WAR above 2 (black) and 3 (blue). We know McCaffrey and Henry are now lost. But even so, a player like Derrick Henry has already done enough to propel otherwise average teams to the playoffs. This might still be a tough hill to climb come playoff time, but it’s not a bad consolation for a draft day landmine.

Meanwhile, drafters near the turn prudent enough to take the risk on second-tier RBs such as Jonathan Taylor, Austin Ekeler, Najee Harris, or Joe Mixon are ready to make a deep run provided they were able to at least draft for par the rest of the way.

But managers that chose to steer away from RB in Rounds 1 and 2 were left with an underwhelming field of WRs outside of the top-two in ADP (Adams and Hill). DeAndre Hopkins, DK Metcalf, Calvin Ridley, AJ Brown, and — my goodness — Allen Robinson prove the idea that top-billed WRs are also no safe bet even if they stay healthy. The difference between lackluster RBs vs lackluster WRs is that injury is a much bigger factor for RBs vs inexcusable poor play. There’s not much you can do when a WR is struggling either from his own account of the hapless nature of his team (shout out Allen Robinson). These names might not trend on Twitter like the injury-lost RBs, but the availability bias will lead you to focus on the lost RBs and detract you from the simply underperforming WRs.

The good news for managers of unfortunately headline making RBs such as Barkley, Kamara, Cook, Jones, Chubb, or Elliott is that there is still time for one or two of these backs to put it in gear down the stretch when you really need it: for the fantasy football playoffs. It’s still likely more of these RBs will disappoint than not but a similar sentiment can be made for WRs. The top difference makers like Jonathan Taylor, Austin Ekeler, and Joe Mixon all come from the RB position. 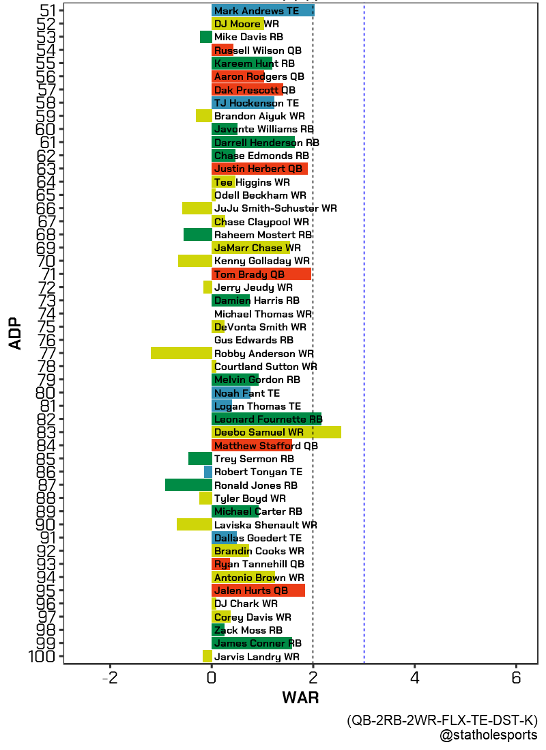 Setting aside the first two rounds of ADP, only four RBs/WRs were able to breach the arbitrary 2 WAR threshold (Kupp, Swift, Samuel, Fournette). More or less, there is parity between the positions after Round 2. This all jives with recent history too as I covered in this preseason draft strategy using WAR. For a little fun — and a little perspective — here’s how a few successfully constructed teams could have panned out for conventional leagues drafting near the turn:

The two slates of teams might act as a Rorschach that can reveal whether you are team Bell-Cow RB or Zero RB. You’ll notice that I didn’t include Round 1 turn-eligible names like Jonathan Taylor or Austin Ekeler in hopes to make the teams appear even. Even still, the total WAR provided by the RB heavy team above outduels the WR heavy squad (17.3 vs 16.7 WAR). For those wondering, the RB heavy team jumps to 19.2 WAR by selecting Taylor and Ekeler in Rounds 1 and 2.

In short, I think the availability bias is casting a misperception on the RB position due to top-name RB injuries. But when the full data is revealed in terms of WAR, the very thing we expected to see is coming to fruition: some top ADP RBs are getting injured, and others are setting you up to hoist your trophy.