Capitalizing on upside and mitigating risk are the two predominant goals of early round fantasy football drafting. It’s a song and dance that leads many to favor weighing one draft strategy over another. The more conservative drafters might prioritize mitigating risk and focus on positions like WR, who tend to be more injury-avoidant. The old adage “you can’t win your league in the first round, but you can lose it” is tattooed on their bodies. Meanwhile, the reckless – live free, die young – types (like me) prefer traversing the RB minefields early.

Both sides of this argument present plausible cases, but despite what Cam Akers drafters are feeling right now, history suggests walking through the RB minefield is the plus-EV play. It’s much like doubling down in blackjack – if you don’t go for it big, you won’t win. And the old adage is only half right: you can certainly lose your league in the first round – but you can damn well win it too. And I have the data to prove it.

Draft risk comes in two forms: injury and underperformance of star players from the year before. Typically, top-billed RBs are more injury-prone than WRs. Drafters of Christian McCaffrey and Saquon Barkley in 2020 can attest. And most top-billed WRs can be counted to maintain consistent year-over-year production. What needs to be balanced though is the amount of production. Is it worth betting on a position like RB that may have lower hit rates, but higher possible returns? Scott Barrett’s breakdown of WAR sheds some light on the answer and that is what this article is going to assess and answer.

Fantasy football WAR estimates how many wins a player provided fantasy managers who start them over the course of a year more than a position-level replacement. Wins in fantasy are the ultimate measurement of value, so the amount of wins provided by any position accurately determines which players were better than others – even across positions. 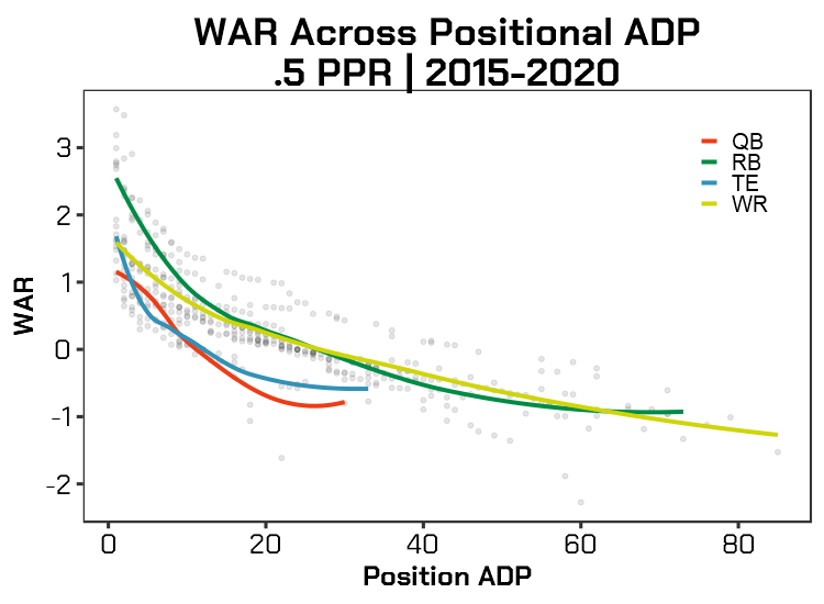 Focusing on the relationship between RB and WR, there is simply no contest for which position is the better bet early on. The first few RBs drafted in the past six years produced WAR values around 2.5, while top-drafted WRs provided close to an entire win less for fantasy managers. And while TE edged out WR at positional ADP 1, they were no match for the bell cows either.

The tables below show WAR results for the top-5 RB/WR since 2015. Despite the landmines on the RB side, the average WAR is still higher amongst these RBs than WRs (1.19 vs .93).

Note: 2020 WAR uses a more robust method that results in higher WAR estimates for all positions. Weekly ESPN player start percentage is unavailable in prior years, so a slightly different approach was used. In both approaches, injured players are penalized by attributing replacement-level production to ensure that injury properly factors in the resulting figures.

Round by Round RB/WR Comparison

Another angle of comparison to put the last nail in the Zero-RB coffin is to look at WAR production at the top of bottom of each of the first five rounds of a fantasy draft: 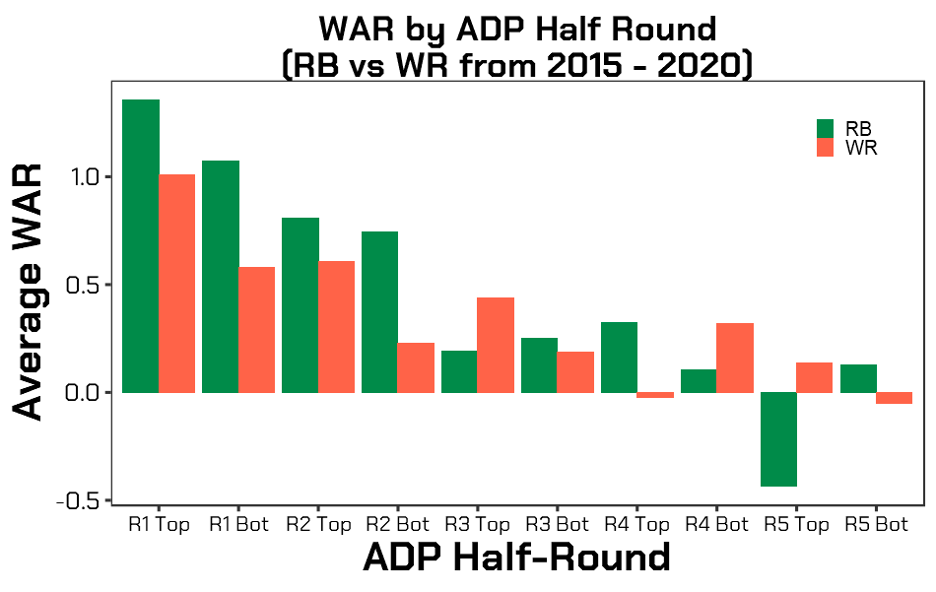 The graph reveals that RBs drafted in the first six picks since 2015 produced a little less than a half-win more than the average WRs taken with a top-6 selection. RBs taken in the latter half of Round 1 averaged twice the WAR as WRs. RB is the better EV play at both the top and bottom of Round 2 as well. Things change drastically at the top of Round 3 — at this point many more RBs had been taken in the first two rounds than WRs, leaving all the tried-and-true bell cow RBs off the table. Meanwhile, many of the top-billed WRs were still available and produced at higher levels than the left-over tertiary RBs. But at this point and on, no half-round grouping averaged a half-win per season over replacement. The story had already been told.

Revisiting the line graph from above, TE stands out as the clear cut #2 most important position to target at the top ADPs. Not only because it edges out WR at ADP #1, but because of the steep slope of decline immediately following. And if any position is worthy of being argued as a contender for the #1 pick in fantasy outside of RB, it’s TE (Travis Kelce).

While you can expect the top TE to earn about a win less than the top-performing RB in 2021, it’s much more reasonable to expect Kelce to make good on that #1 TE ADP rank vs any RB. He’s been the #1 TE three years in a row in a team environment as consistent and productive as possible. And if you believe in following the volume, there’s just no sure thing we’ve ever seen like Kelce at the TE position. 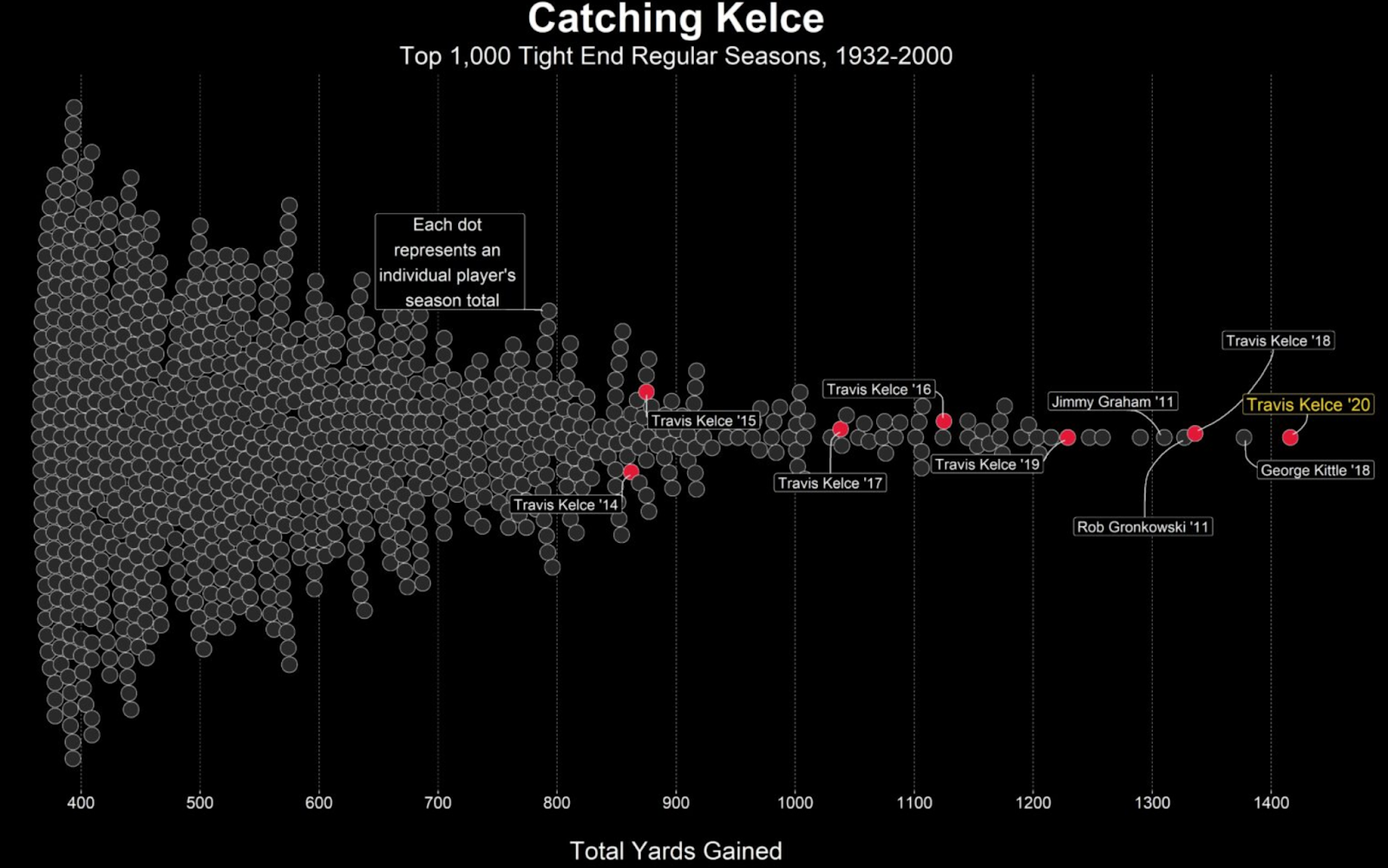 So where should you draft Travis Kelce in 2021? This is a question that has lived rent-free in my mind for months now and may require a more in-depth look. But given McCaffrey’s dominance in the three games he played in 2020, I feel confident there’s at least a 50% chance he outperforms the top TE of 2021. After that, I think it’s more than fair game to take Kelce as the overall #2 in most formats.

2021 is going to be a very interesting year for QBs. The top performers excelled considerably while plug-and-play streamers failed to provide the decent floor as promised from years past. Did the entire dynamic of QB change in 2020, or was this just a fluky year?

I think it’s reasonable to be a little more bullish on QB with the understanding that it is still probably difficult to predict who will be the top performers year-over-year. The red slope above reveals another steep decline but, unlike RB or TE, there’s a bit of an easing into the drop instead of a straight freefall. I think an optimal mindset for seasonal drafting is to not be the first team to select a QB, but to make sure you have one of the top few with major upside. Dak Prescott, Kyler Murray, or Josh Allen are all perfectly fine consolations for passing up Patrick Mahomes, but even if you get caught behind a run on QBs, names like Lamar Jackson, Justin Herbert and – yeah, I’ll say it – Joe Burrow offer league winning upside worth shooting for.

Securing one of the precious few players capable of lifting your fantasy team not only to the playoffs, but a championship, must be done within the first couple picks of your draft. The data provided in this article should put to bed any doubt that, in today’s game, betting your first couple of picks on top RBs is the more conventional approach for good reason. You can’t be afraid of walking into an injury landmine. Sure, taking a WR might be a safer approach that could set you on the way to a playoff berth, but it’s the teams with the top RBs who are more likely to bring you home the championship. You have to shoot your shot. It’s very possible you personally will miss and lose your league in the first round by taking a RB — but the data shows us that someone is going to win it.