In Part 1 of this series, the nuts and bolts of fantasy football Wins Above Replacement (WAR) was fully reverse engineered to provide fantasy managers a full picture of what this statistic is and how it reveals the optimal draft selection in a 12-team draft. In Part 2, we used WAR to identify which positions were most impactful in fantasy football in 2020. In this final installment, we’ll explore WAR results for the past five years and identify trends that carried over from year to year. These trends should fuel draft strategies in 2021.

The WAR model was run using half-point PPR for the past five years. However, since data on ESPN player start percentage is only available for 2020, a similar but different method was used for 2016-2019. Instead of using the top-12 weekly started players to produce team averages and replacement-level figures, the top-12 seasonal producing players were used as the best proxy. While not quite as theoretically precise as start percent data, this helps provide similar indication of the predictability of both individual players and differences in positional distributions.

The four major positions (QB/RB/WR/TE) of fantasy football will be explored in order of draft-day importance for 2021. DSTs and Ks will be ignored, as even those with decent end-of-season WAR results have been shown time and time again to be the product of pure random chaos. And as you’ll soon see, the past five years of WAR reveal there is no competition between which position is king in fantasy football. 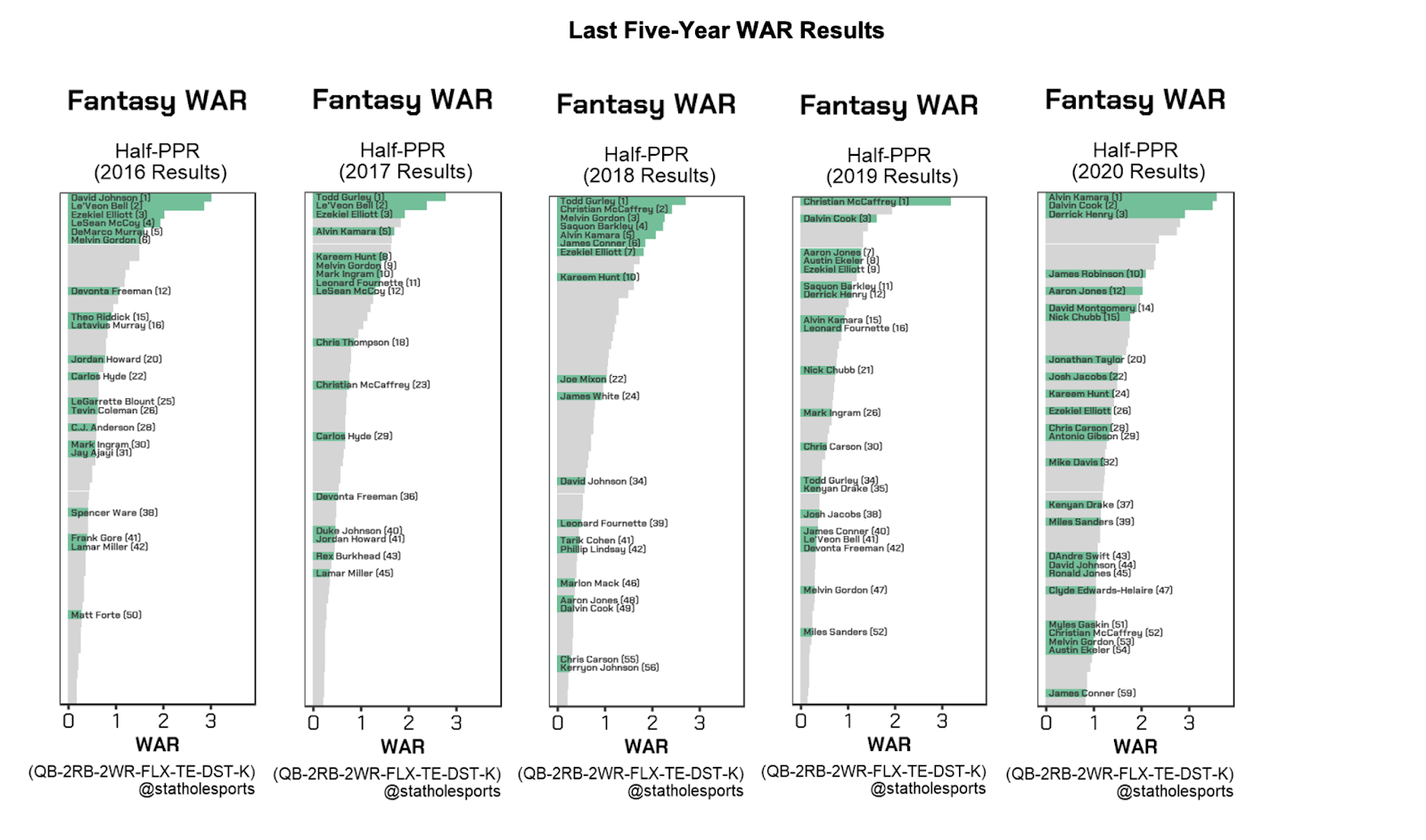 There is no debate that RB is the most influential position in fantasy football, as it has provided the top-performing fantasy player in each of the last five years shown above. The story is the same for the five years prior too (2011-2015), going back to the days of Arian Foster’s reign. But the fact that an RB topped the list each of the last 10 years is one thing; the degree of separation illustrated by the green bars shows that the difference from the top RB and the top-non-RB in each and every year is roughly an entire win. Remember, this is solely due to one starting player out of nine on a fantasy team.

The consistency in top-RBs from year-to-year is relatively apparent in these graphs as well. It’s never easy for a #1 performer in any competitive group to repeat as a #1 the following year. Just like MVPs in any sport, Madden cover selection, home run leaders, or whatever proxy you like to use, the forces of mean regression through randomness that naturally exists make this so. So, it’s unrealistic to expect the WAR rank #1 to repeat. Despite this, Todd Gurley was able to do so in 2017 and 2019 (Arian Foster did as well in 2011 and 2012) and only David Johnson was a WAR rank #1 that failed to make the top-60 ranks the following year. Yes, even Christian McCaffrey’s three games in 2020 were dominant enough to benefit managers despite being presumed to have used a replacement-level RB for 10 weeks.

With this level of reward coupled with relative year-over-year stability of the RB position, it’s no wonder the standard play is to hammer RBs early in the draft. 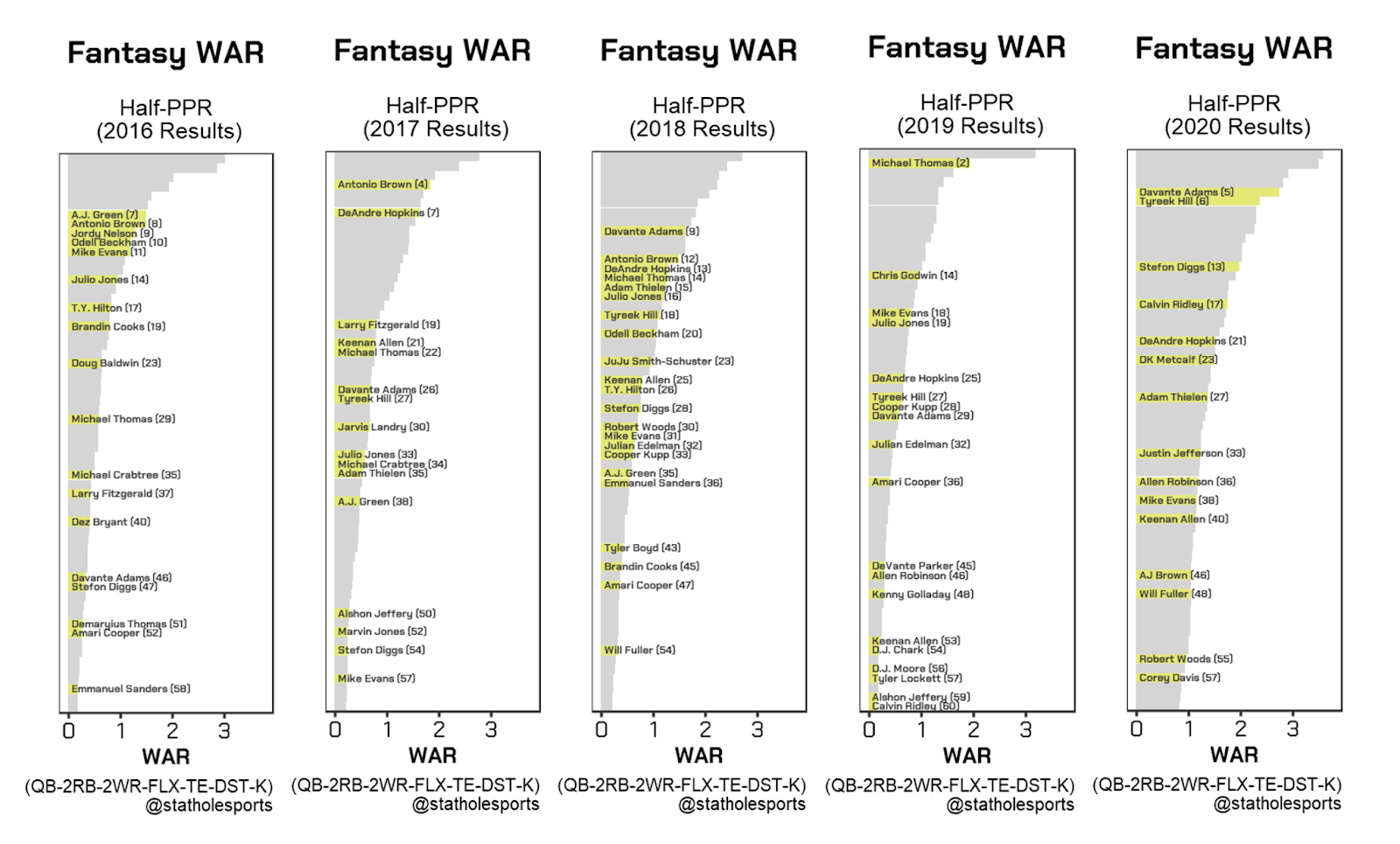 The alternative draft strategy to hammering RBs early in drafts is to focus on reliable positions first — namely WR. However, the WAR charts going back five years above show the relative dearth in top-performers compared to RBs. Even Michael Thomas’ NFL catch record year of 2019 was more than a full win from rank #1. And 2020 showed that WRs are not exempt from injury, as Thomas failed to make the chart. Of the top-billed names, there is still evidence of year-over-year consistency with WRs, but certainly no more than RB which produced decidedly better results on the whole.

Does this mean top WRs like Davante Adams and Tyreek Hill don’t belong in Round 1 consideration in 2021? Not necessarily, especially given the consistency in their on-field situations since 2019, and the fact that surefire Hall-of-Fame QBs will still be throwing them the rock. But the data does suggest you’d be much better off betting on the league’s scarce supply of dual-threat workhorse RBs that offer a much higher ceiling. 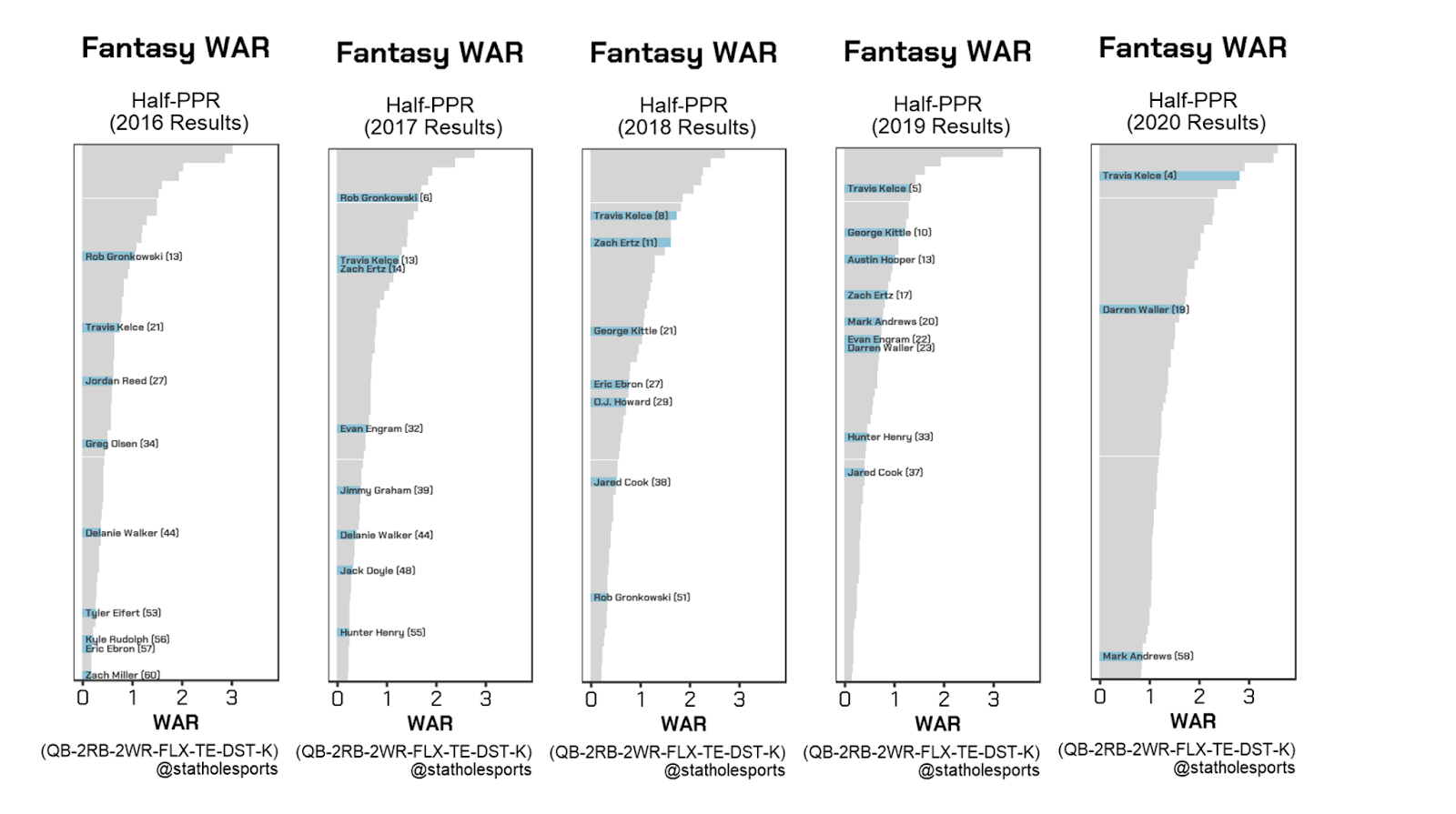 TE has produced at least one player worthy of a Round 1 investment in each of the last four years, with Rob Gronkowski missing the mark in 2016 by one selection. While the position as a whole is generally viewed as a crapshoot (correctly so), the consistency among top-performers is striking. Travis Kelce was the #1 TE in each of the last three years and worthy of Round 1 selections in each of those years, as well. But look at the gap from Kelce and the TE #2 (Darren Waller) and TE #3 (Mark Andrews) compared to the other four years. While waiting on a next-best type of TE meant sacrificing a percentage of a win for your team, the drop from Kelce to the TE #3 was, roughly, an absurd two wins.

This all makes Kelce’s 2021 target draft spot especially intriguing at his current #8 ADP. Selecting Kelce will definitely mean missing out on any dual-threat workhorse RB, but given the intense inequity in the position, I can’t even hate taking him #1 overall. Compare this lack of alternatives to WR, in which you find yellow bars scattered throughout the top-60 in all of the last five years. You can always circle back for a WR in a draft, but once Kelce (and to a much smaller percent, Waller) is gone, the TE party is completely over. 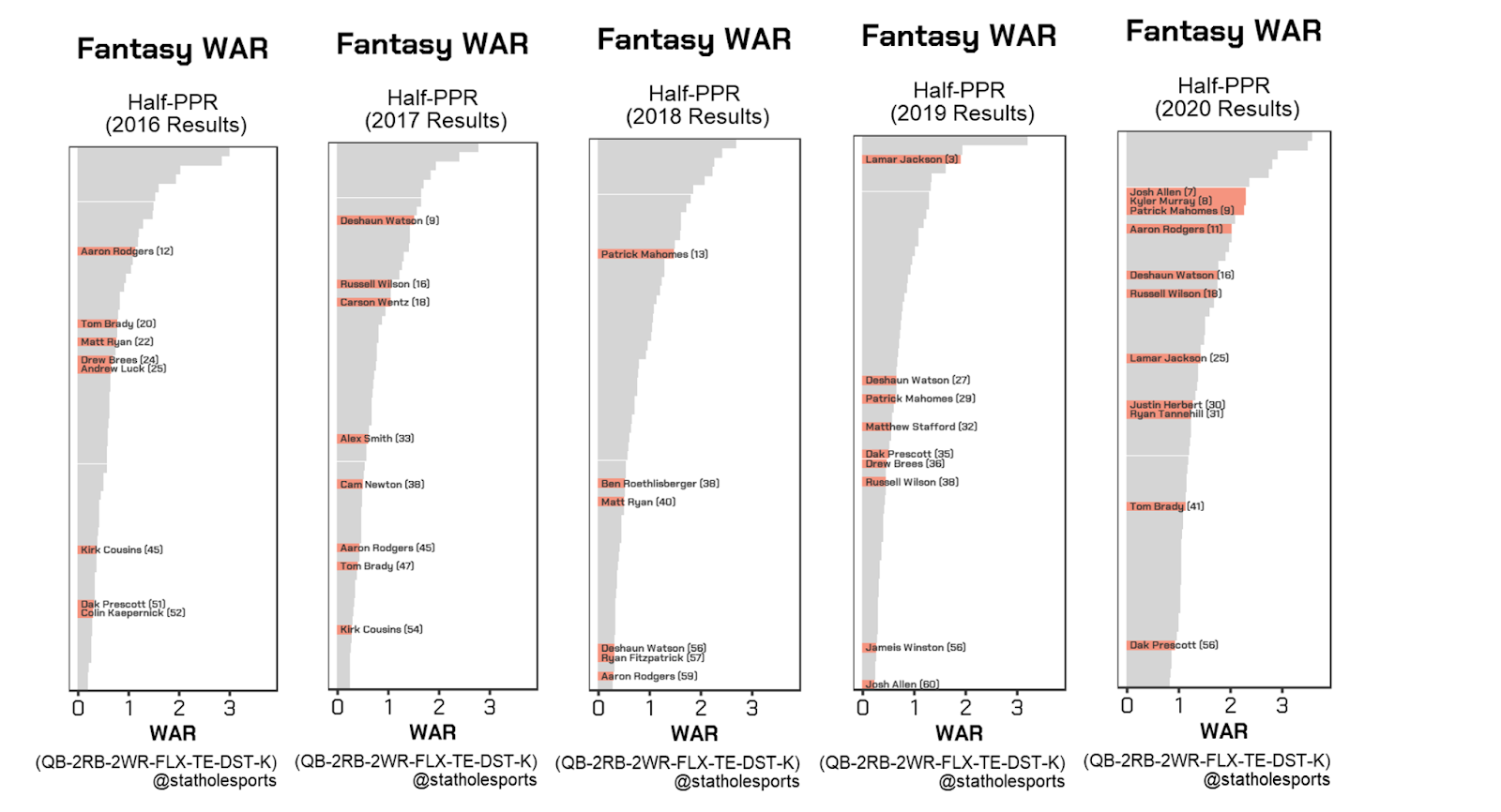 “Wait on a QB. It’s the smart move.” That’s kind of become accepted fact in the fantasy community, and not many have gone broke doing just that in recent years. That said, it might be shocking to see that four out of the last five years saw at least one QB worthy of a Round 1 selection — purely by WAR — with Patrick Mahomes just missing the mark in 2018.

In 2020, an upsurge in QB effectiveness might have been thanks, in large part, to a down year from replacement-type QBs. This led to four QBs being, in hindsight, worthy of a Round 1 selection. It remains to be seen whether 2020 was a seasonal fluke or a sign of an emerging trend, but given the amount of potential QB #1s, waiting to be the sixth or seventh team to take a shot at QB seems to be the prudent way to go. This could come as early as Round 4, or somewhere in the middle rounds depending on how a draft shakes out.

I hope this three-part series helped you understand what Fantasy WAR is and what it isn’t. We defined it, positions were compared with one another for 2020, and the last five years of WAR were presented to provide indication of predictability in terms of players and positions along with markers for potential emerging trends. While WAR is a descriptive metric at its core (it tells us what happened, not what will happen), the general consistency in positional distributions allow fantasy managers to determine which positions are better bets to provide them the thing they need the most in fantasy football: wins.