The lengthy list of scholarship offers from teams knocking at the door may not come as much of a surprise, but the fact that Najee Harris nearly transferred out of Alabama to seek more playing time after his true freshman season just might. With a pair of National Championship notches in the former unanimous five-star recruit’s belt, the rest, as they say, is history. Harris grew up in the crime-riddled streets of Antioch, California. While attending Antioch High School and playing for Coach John Lucindo, Harris accrued over 2,200 rushing yards each of his final three seasons, with 75 total TDs over his last two. 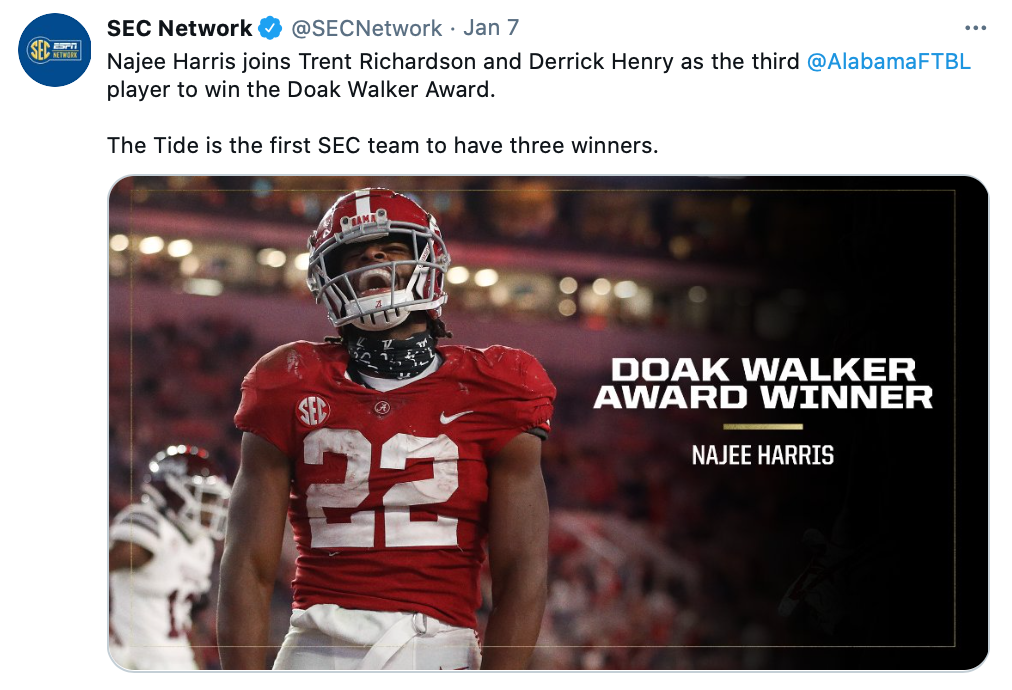 Unlike his top competition in our 2021 rookie drafts -- Ja’Marr Chase and DeVonta Smith, Harris’ athleticism bled out enough onto the impression of scouts to reach the top of their prospect rankings in spite of not playing for a top nationally ranked school. As you cansee for yourself, Harris’ highlight reel is simply jammed-packed with clips of a man running over, around, and through pubescent teenagers to reach the end zone. The very first clip offered future opponents a glimpse of things to come… 230 pounds of muscle hurdling over their heads. Harris developed a reputation at Alabama for attempting to hurdle teammates at nearly every practice.

You might take one look at Harris’ 4.66 40 time recorded from the 2017 Nike Opening with a bit of concern. First of all, I only put stock into RB 40 times when they are fast. For backs packing the size of Harris, 40 times can be considered irrelevant. Consider that Derrick Henry was timed at 4.72 seconds at the 2013 Nike Opening. However, I do consider the three cone, short shuttle, and vertical measurements to be of considerable importance at the position. The three-cone measures footwork, the shuttle highlights body control, and the vertical circles explosiveness.

Harris recorded an outstanding short shuttle time of 4.16 seconds at the Opening. That time is quicker than that of Christian McCaffrey’s official combine time. I do find the 32.2-inch vertical recorded at the Opening a bit puzzling. To give you an idea why, take a look at Harrishurdling Notre Dame’s Nick McCloud in the ‘21 Rose Bowl. In addition to height and weight assessments for DeVonta Smith, my attention will also be on Harris’ vertical measurement and three cone time at Alabama’s Pro Day. 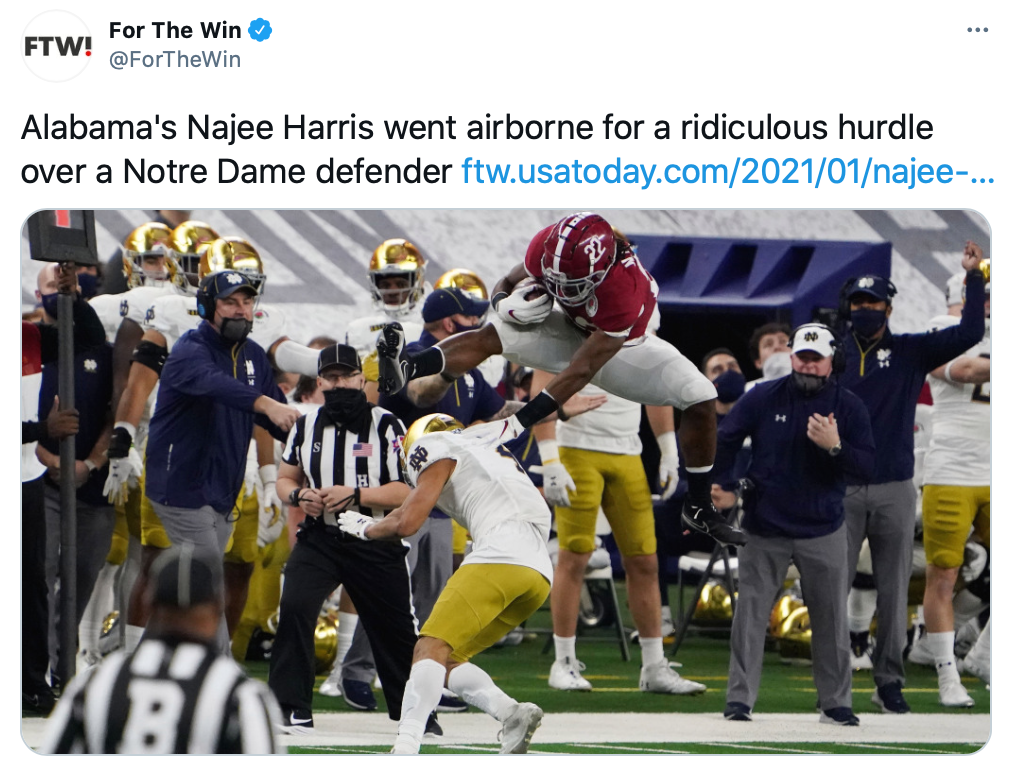 During his four seasons in Tuscaloosa, Harris utilized his bruising play style to surpass all previous Tide RBs in career rushing yards (3,843), TDs (46), and total TDs (57). His large frame, oozing athleticism, may give the impression of a north-south, downhill back, but Harris was actually far more efficient carrying the ball outside of the tackles. On 49% of carries directed off the edge, Harris accumulated 65% of his TDs for Bama. He only dropped two-of-92 career targets, but he’s not the type of RB that’ll do damage lined up at receiver. Any concerns about pass protection inadequacies can be put to rest. I see a back who has grown more-and-more comfortable protecting the Crimson Tide pocket as he’s matured.

Only 14 RBs have been selected in the first round over the last 10 seasons. If I’m being picky, of those, only Ezekiel Elliott in 2016, Christian McCaffrey in 2018 remain on the roster of the drafting team, and have produced results worthy of their selection. Is Harris worthy of adding a fifth name to that “since 2011” list? Absolutely. But an argument could be made in favor of the backs selected in the second round over that same time as having offered their teams better value and, on average, greater success. So, should Harris fall to the second, I would have no concerns that it could impact his future in a negative way.

Harris plays the game like a man determined to improve with every snap. Judging by his college analytics, the data entirely supports that assessment. In order to avoid lazy assessments when we attempt to comp Alabama RBs, I am of the belief that all previous Tide RBs should be off limits. The back that stands out to me the most is Joe Mixon. The pre-college athletic testing is spot-on, both offer dynamic playmaking ability, solid blocking technique, and both hail from sunny California. Mixon is a few pounds lighter than Harris, but not enough to sway my opinion. Keep in mind, a Mixon comp is not to say that Harris is a straight clone. We simply cannot dictate how players are utilized in the NFL. But, from a talent-level perspective, Harris and Mixon are a match. However, I will say that Harris’ dedication to both lower his pads to passionately deliver damage and remarkable body command slightly set him apart from Mixon. 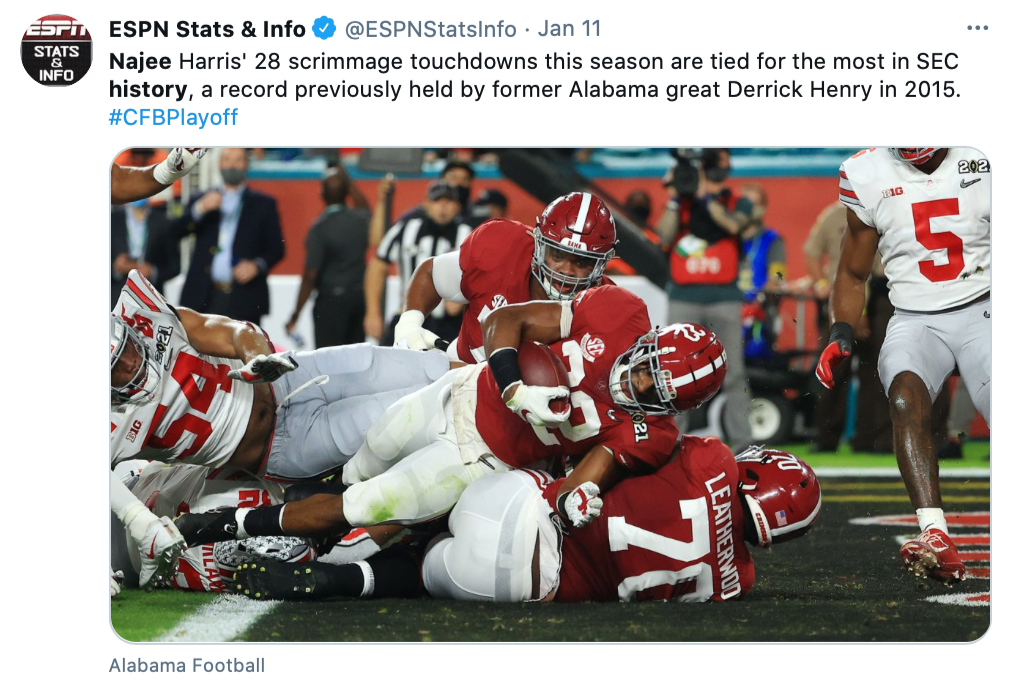 As for a destination, Harris will fit in best with an offense featuring skilled guards capable of pulling to lead the run, also featuring an outside zone attack. Harris also scored a ton of his TDs during his Alabama career with 22 personnel on the field. So, blocking capability at TE would also be a plus, but far from breaking a fit without it. In the first round, the Steelers at 1.24 makes a level of sense. That defense in combination with its talented receiver arsenal appeared to be a top RB short of forcing its way toward the Super Bowl. However, Pittsburgh is not a stylistic fit.

If Harris were to fall to the second round, the Jets at 34 and Falcons at 36 catch my eye the most. NYJ will have an entirely new staff in place with former 49ers O-line coach John Benton hired as the run game coordinator. While with SF last season, the Niners utilized outside zone at a top-five rate in the league. The Jets’ O-line is far from loaded, but field capable guards in Greg Van Roten and Alex Lewis.

Atlanta would be my optimal landing spot for Harris. The Falcons hired Arthur Smith as their new head coach, coming over from a Titans team that finished with the second-most outside zone runs this season. Smith hired Dave Ragone as his OC, leaving a Bears team that finished with the highest rate. Topping the cake, Chris Lindstrom is one of the finest pulling guards in the entire NFL.

Unsurprisingly, landing spot will dictate everything for Harris in Year 1. Just as we saw with J.K. Dobbins last season, being drafted by a contending team already rostering an established veteran could take away a portion of Harris’ bell cow potential. If you require a reminder on the importance of every-down work, make sure you read Scott Barrett’s phenomenal writeup to refresh your memory. Only a handful of RBs in the class have anything resembling the three-down potential of Harris. Harris could even push Ja’Marr Chase as the 1.01 were he to land in Atlanta. Noteworthy improvements as a receiver out of the backfield the last two seasons and in pass protection throughout his Bama career certify him as the RB1 of this dynasty class. Outside of superflex formats, view Harris as a top-two selection in rookie drafts.