As best ball has become more popular over the last few years, we’ve seen a variety of operators enter the space. Notables such as BestBall10s and Underdog fantasy make best ball drafts and tournaments for multiple sports their primary product. These sites draw users who only want to play best ball, because, well, that’s basically all they offer.

Other legacy operators, such as DraftKings, want to get in on the best ball action because it’s proven to be both very popular and profitable (operators can take 10-15% of the prize pool). So it’s easy to see have begun providing their own offering of best ball tournaments. DraftKings, specifically, has a strong tournament offering across low, mid, and high stakes, with their $20 entry, $3.5 million dollar prize pool “Millionaire Maker” as their flagship tournament.

As you, the reader, likely know, best ball is not DraftKings’ main product. In fact, it’s largely an afterthought given how successful both their DFS and sportsbook offerings have become. Most users on DraftKings are not there to play best ball, they are there to bet or play DFS. Just compare DraftKings’ best ball UI/UX to that of Underdog or BestBall10s, and you’ll understand what I mean. DK has no CSV export, no ability to see overall player ownership across all lineups, and no ability to upload your own rankings.

What does this mean? Sharp players, those who would take advantage of the ability to upload their own rankings, use CSVs, and do analysis on player exposures just aren’t playing best ball at DraftKings. People who are killing time before a DFS lock, who have a little extra dough in their accounts, or who just got finished placing sports bets are.

DraftKings has some of the largest tournaments and some of the most casual players. That’s a recipe for a huge edge.

Before we dive into the site-specific values, there are a few things worth noting:

D’Andre Swift is an exceptional value on DraftKings at RB18, as he ranks no lower than RB16 on any other PPR best ball site. That’s far too bearish, especially in PPR, as Swift has 100+ target upside playing under OC Anthony Lynn, who coached Austin Ekeler to what would’ve been back-to-back 100+ target seasons had it not been for injury.

The presence of Jamaal Williams and the potential of a Todd Gurley signing (which hasn’t happened yet) may limit Swift’s carries and playing time, but I don’t think it harms his PPR upside nearly as much as the market might fear, especially at DraftKings. Swift was 42nd among RBs in carries per game (8.77) and 34th in snaps per game (30.6) yet finished 2020 as the overall RB16 in FPG (14.6), primarily thanks to his 4.4 targets per game (11th-most among RBs). Factor in Jared Goff’s brutal 6.7 aDOT, a league-leading number of vacated targets plus a significant increase in negative gamescript and Swift could approach the 6.7 targets per game Austin Ekeler averaged over the last two seasons. I’m taking him over and over again in the late-3rd round/early-4th round on DK.

Diontae Johnson led the Steelers — and was 6th in the NFL — with 9.3 targets per game, finishing the season as the WR21 in FPG (14.9). That finish doesn’t fully encapsulate just how awesome Johnson was last season, as Scott Barrett noted that he recorded a sub-50% snap share (due to injury) in Weeks 3, 5, and 14 while also spending time in the injury tent in Week 8. If you remove those games and include the playoffs, Johnson averaged 12.3 targets per game and 19.4 FPG, numbers that respectively would’ve ranked 1st (by 1.7 targets!) and 4th among WRs if extrapolated to the entire season. He’s already broken out, it just hasn’t turned into a league-winning season. Yet.

While the Steelers may lean slightly more run-heavy in 2020, Ben Roethlisberger’s fleeting arm strength likely prevents that from impacting Johnson significantly, given he was Big Ben’s most targeted player within 10 yards last year. At WR24 on DraftKings, Johnson is valued well below the WR1 price tag he’ll carry in 2022 if he can stay healthy all season.

Raheem Mostert is the clear-cut starter for San Francisco at this point, that’s not up for debate. And yet, he’s being drafted after backup rookie RB Trey Sermon (ADP: 72.5, RB28). With Jeff Wilson Jr. out for the first 4-6 weeks of the season, Sermon will certainly see the field, but Mostert will still be leading the way with a similar workload to the 15.0 touches per game and 12.7 FPG he saw last season.

That FPG isn’t earth-shattering, but remember that Mostert plays in one of the most boom-or-bust backfields in the NFL, which makes him (as their lead rusher) an ideal best ball target since you’ll never need to worry about when to play him. Over the past two regular seasons, 49ers RBs have had games of 40.8, 35.0, 30.9, 30.4, and 26.4 DraftKings’ points. As the lead rusher, Mostert will likely capture the majority of those ‘boom’ performances, giving him weekly RB1 potential. The opportunity to draft the Mosteratti after backup Trey Sermon might be the most egregious market oversight of #BestBallSummer.

The DraftKings ADP market seems unusually low on Corey Davis, with his WR56 ADP significantly lower than comparable PPR best ball sites like BestBall10s (WR49) or Drafters (WR50). DraftKings is the only site I could find where Corey Davis was being drafted after Elijah Moore. Don’t get me wrong, I love Elijah Moore as much as the next guy, but banking on him to be a more valuable fantasy asset in his rookie year than an established veteran coming off a near-1000 yard season is a tough ask.

Looking back at his 2020 season, Davis showed excellent consistency, scoring double-digit PPR points in 10 of his 14 games. He also posted two zeros, but if you remove those duds he averaged 15.95 FPG in the 12 games he caught a pass. That would have made him the WR15 in FPG. Davis should lead the Jets’ WRs in snaps and that translates to legit WR2 upside at a WR5 price tag. I’m viewing Davis as a decent value across the industry, but he’s an excellent one on DraftKings at WR56.

Jakobi Meyers is both a DraftKings value and an industry-wide one. Why? He’s slated to take over the most valuable fantasy role in New England: the slot. After Julian Edelman went down in Week 7 due to injury, Meyers went from 6.8 slot snaps a game to 31.7 — an eerily similar number to the 36.7 Edelman averaged over the last two seasons. That’s important to note because New England’s slot role has been a PPR cheat code for a number of years. From 2007-2019, Wes Welker, Danny Amendola, and Julian Edelman averaged 16.4 FPG in their respective time as the starting slot. That number would’ve been good enough for WR14 last year.

Meyers himself is an underrated talent, as he posted strong numbers vs man coverage with the 11th-best YPRR (2.64) and 27th-best PFF receiving grade (78.6) out of 108 qualifiers. Once he became the starting slot in Week 8, Meyers’ averaged 13.1 FPG and 7.4 targets per game — marks that would’ve ranked 37th and 29th among WRs if sustained for the entire season. Strangely, Meyers hasn’t scored a TD on 122 career targets, and he ranked 9th-worst among WRs in expected TD differential (-1.9) last season, so you can add the likelihood of positive TD regression to the list of reasons to be bullish.

Looking at New England’s roster, the bolstered TE depth may reduce the overall target share available to the WRs, but Meyers sets up as a starter regardless. As it’s unlikely the likes of Kendrick Bourne, Nelson Agholor, and Marvin Hall will be able to usurp Meyers’ slot role, Meyers is my pick to lead these wide receivers in targets, and I’m expecting him to either reproduce or expand on the 13.1 FPG he averaged without Edelman last year.

Sam Darnold is one of the cheapest QBs who’s likely to start the entirety of the 2021 season. The 12.9 career FPG he posted in New York is about as bad as it gets, but he’s leaving behind arguably the worst coach (for fantasy purposes) of all-time in Adam Gase. The ‘Gase Splits’ are a well-documented fantasy football phenomena, as seemingly every notable skill position player who has played for Gase suffered career-lows in fantasy production. 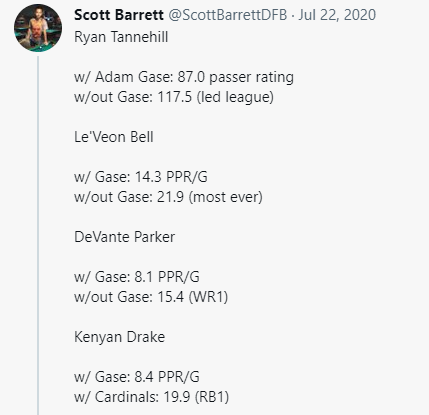 Now in Carolina with HC Matt Rhule and OC Joe Brady, there are quite a few encouraging signs for Darnold. The most obvious is significantly better offensive weapons. Robby Anderson, D.J. Moore, Christian McCaffrey and Terrace Marshall are an unquestionable upgrade over the injury-riddled receiving core Darnold was throwing to in 2020. Beyond that, Darnold should (obviously) be getting an improvement in coaching, as Joe Brady did an outstanding job calling plays in 2020. Despite earning his 3rd-worst career PFF passing grade, Teddy Bridgewater earned career-high marks in passing yards (3733), completion percentage (69.1%), yards per attempt (7.6), and FPG (16.1), finishing the year as QB22 (in FPG) largely thanks to what Joe Brady did as OC.

Darnold himself is being drafted at his Adam Gase floor, but he carries high-end QB2 upside in a drastically better offensive environment. He doesn’t even have to be better than Bridgewater was last year, as just posting numbers similar to Bridgewater’s 2020 season would make Darnold a value at this ADP. He’s the last QB (by ADP) I’m taking consistently on DraftKings.

Travis Fulgham excelled when the Eagles were desperate for WR depth, averaging 19.3 FPG and 8.8 targets per game from Weeks 4-8 while filling in primarily for the injured Alshon Jeffery. Jeffery returned to the field after the Eagles Week 9 bye and Fulgham’s fantasy output suffered massively, as he recorded just 2.4 FPG and 2.9 targets per game in the eight subsequent weeks.

Fulgham’s primary competition for outside snaps last year — DeSean Jackson and Alshon Jeffery — are both no longer with the team. Philadelphia spent a 1st-rounder on DeVonta Smith (who will surely start), but with Greg Ward and Jalen Reagor competing in the slot, Fulgham’s main competition for the other outside WR spot is John Hightower and Quez Watkins. Fulgham proved last season he can beat those guys out for playing time, outsnapping both players combined 516 to 303 after Week 4. It’s nothing flashy, but I don’t think there’s another WR who’s likely to see a 2021 snap share above 50% with an ADP lower than Fulgham.