Hello, and welcome to the Week 8 XFP Report. If you’re unfamiliar with XFP, I’ll get to that in a little bit. 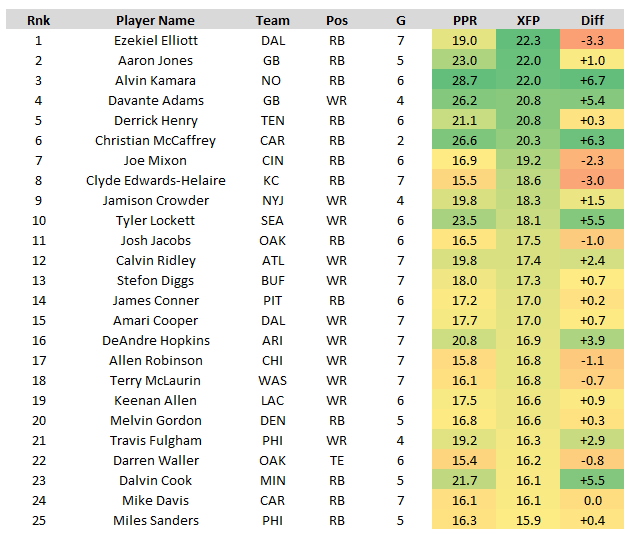 Okay, so Green is back to seeing good volume, but he’s also still not doing much with it, falling below expectation in every game thus far. He’s far-and-away our top (positive) regression candidate by XFP, which also means he’s the least-efficient player in fantasy, falling a combined 44.9 fantasy points below his expectation. 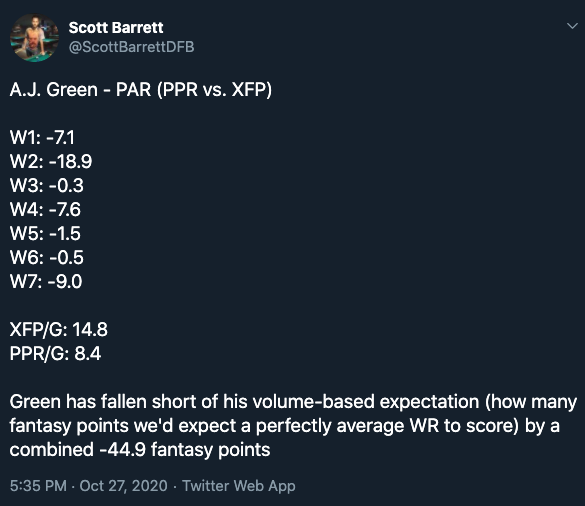 But Green has performed so poorly on his good volume that we have to ask ourselves – is Green a regression value or a regression trap? With Tyler Boyd (+2.0) and Tee Higgins (+1.6) so much more efficient with their volume than Green (-6.4), the obvious question is – “Why even target Green?” Maybe volume starts to tilt even more in favor of Boyd and Higgins in the coming weeks, or maybe Green surprises us all and returns to former glory. Unfortunately, at age 32 and after a 1.5 year absence from football, I’m not too optimistic.

Johnson was one of our must-draft players this offseason, but it’s been a rocky start. Johnson tanked our cash lineups in Weeks 3 and 5, running a combined 14 routes before exiting both games early due to injury. But across his three healthy games thus far, he’s been even better than expected. 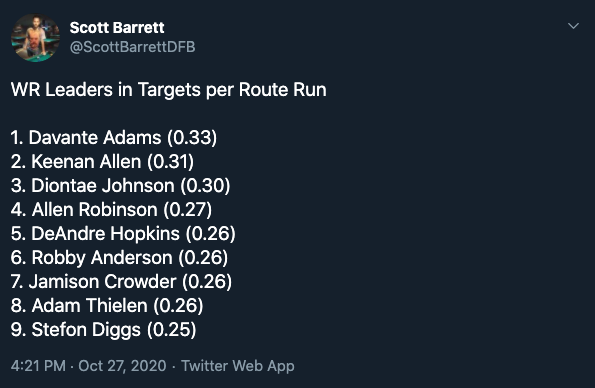 It's notable that Tennessee used Malcolm Butler to shadow Chase Claypool in Week 7, so maybe they were viewing him as the WR1, forcing Ben Roethlisberger to focus on Johnson in the better matchup. But Butler also isn’t really a CB we’ve come to fear – he ranks bottom-15 of 80-plus CBs in yards allowed per snap in coverage, and ranked even worse in each of his previous two seasons.

Of course, Johnson also left Week 7 early due to injury, so keep an eye on his status for Week 8.

Lockett scored 53.0 fantasy points on a 37.2-point expectation in Week 7. Both were the highest marks by any player in any game thus far. His 28.1-point expectation in Week 3 was the 7th-highest-mark by any WR this season, just behind DK Metcalf’s Week 5 (29.3). Lockett also had the highest XFP outing in all of 2019, totaling 34.1 XFP in Week 9, while also scoring 40.2 fantasy points. Across his other four games this year, he averages just 10.8 XFP per game.

Metcalf has been similarly boom-or-bust (volume-wise, but not production-wise). Outside of Week 5, he’s averaging just 10.8 XFP per game. But he’s been incredibly efficient, averaging 17.8 FPG over that span, going 7.0-points over PAR in 4 of those 5 games.

If we just throw out Week 2 due to injury, Adams is averaging an absurd 26.3 XFP per game and 32.8 FPG, which easily leads all players at all positions.

Adams is $8,800 on DraftKings, which is expensive, but maybe not expensive enough. After Week 10 last season, Michael Thomas had an average salary of $9,214, ending at $9,900 in Week 17. Adams was almost never drafted before Thomas in redraft leagues this offseason, and we’re still not viewing Adams similarly to 2019 Thomas, but maybe that’s a mistake. And especially with Aaron Rodgers looking the best we’ve seen him since maybe 2016.

Say what you want about Adam Gase, but the man knows how to get his starting slot WR fantasy points – in fact, it’s the only thing he’s ever done well. Through 4 games, Crowder ranks 2nd in XFP per game (18.3) and 6th in FPG (19.8). He finished 2nd among all WRs in XFP in Week 6 (22.7), before sitting out Week 7 due to injury, and after prior finishes of 19th, 16th, and 8th. Even across his 3-game absence, slot WR Braxton Berrios averages 13.9 FPG. Crowder saw 13 targets in Week 6 (hitting double-digit targets in every game thus far), but scored just 11.8 fantasy points, after 3-straight 100-yard games.

Someone in Discord asked for a write-up on the Raiders, so here it is:

Josh Jacobs leads the team in XFP per game (17.5). In victories he’s averaging 21.5 XFP per game, and in losses just 13.4. That’s the difference between him ranking 4th and 22nd at the position. Basically, he is who we thought he was – the same massively gamescript-sensitive player he was last year. They’re 2.5-point underdogs this week against the Browns, so expect something in the middle of those two numbers this week.

Darren Waller isn’t too far behind Jacobs, averaging 16.2 XFP per game, maintaining 21.9% of the team’s XFP. Both numbers lead all TEs, and would rank top-12 among WRs.

After Jacobs and Waller, no one really comes close. Hunter Renfrow ranks 3rd (7.4), Henry Ruggs ranks 4th (6.7), and Nelson Agholor ranks 5th (5.7) on the team in XFP per game. Ruggs is a decent high-ceiling boom-or-bust play for tournaments, but he’s not seeing good or consistent volume. Agholor led the team in targets (9, tied with Waller) and routes last week (34), though he split routes from the slot 13-13-9 with Renfrow and then Ruggs. So, unfortunately, the slot WR-role is still murky – their Week 8 matchup (Cleveland), is giving up the 2nd-most FPG to opposing slot WRs.

- Last week, with Chris Thompson out, James Robinson earned 100% of the team’s XFP out of the backfield and 41% of the team’s total XFP. Both numbers led all players at all positions. He totaled 22 of 22 carries and 6 of 6 targets out of the backfield, while playing on 90% of the snaps. He’s a full-on (Mike Davis-level) bell cow in Week 9 if Thompson sits again (Week 8 bye).

- Denzel Mims saw 7 targets and 12.1 XFP in his Week 7 NFL debut, but as a percentage of the team’s total XFP (28%), that ranked 5th-best among all players. I mean, Jamison Crowder is still probably the only fantasy-viable option on this tanking team, but this is at least noteworthy.

- Clyde Edwards-Helaire handled 77% of Kansas City’s backfield XFP from Weeks 1-6. In Week 7 (Bell’s first game average), that dropped to just 59%. For perspective, a drop from 77% RB XFP to 59% RB XFP is worth about 4.4 XFP per game. That’s the difference between Ewards-Helaire ranking 7th and 20th in XFP per game (19.0 vs. 14.5). However, if adjusting for the blowout (the starters getting pulled and DeAndre Washington coming on in relief), it was true 80/20 XFP split between Edwards-Helaire and Bell. That said, it was much closer in terms of actual playing time, with Edwards-Helaire out-snapping Bell just 27 to 17.

- Kareem Hunt earned 97% of the team’s backfield XFP in Week 7, which ranked 2nd-best among RBs. He ranked just 10th in total XFP (16.0), totaling 18 carries, 4 targets, and 19.2 fantasy points. His day could have been quite a bit bigger, but Cleveland needed to lean pass-heavy to catch up to the Bengals. And his two other games without Nick Chubb can be easily explained away by the fact that those games came against two of the top-5 toughest defenses against opposing RBs. Look for a big Week 8 from Hunt, against a Raiders defense that’s giving up the 3rd-most FPG to opposing RBs.

- Similarly, Mike Davis remains a great play for however long Christian McCaffrey sits out. He flopped last week in a tough matchup, but still totaled 96% of Carolina’s backfield XFP (4th-most). He ranks 5th in XFP per game and 6th in FPG (20.3) since Week 3.

- Ronald Jones, meanwhile, saw his RB XFP% dip from 91% (Weeks 4-6) to 41% in Week 7 with Leonard Fournette back. Per Arians, Fournette is now “the nickel RB”, “playing in hurry-up and obvious passing situations.” Still, there’s some incongruence here. If he’s really just the team’s scatback, why is it that he out-totaled Jones 16.5 to 12.7 in XFP in Week 7, in a game Tampa Bay won by 25 points? 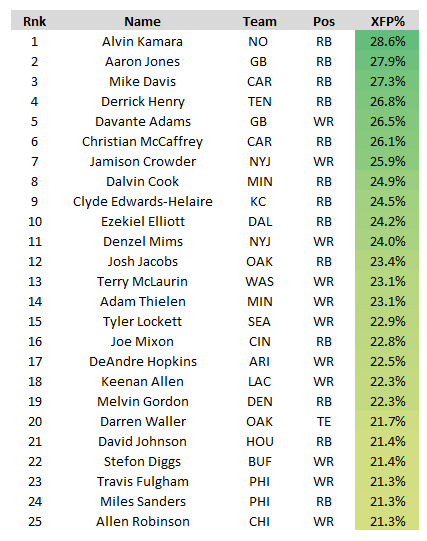