Hello, and welcome to the Week 16 XFP Report. If you’re unfamiliar with XFP, I’ll get to that in a little bit.

Through 15 weeks of action, here are the top-25 players in expected fantasy points (XFP) per game: 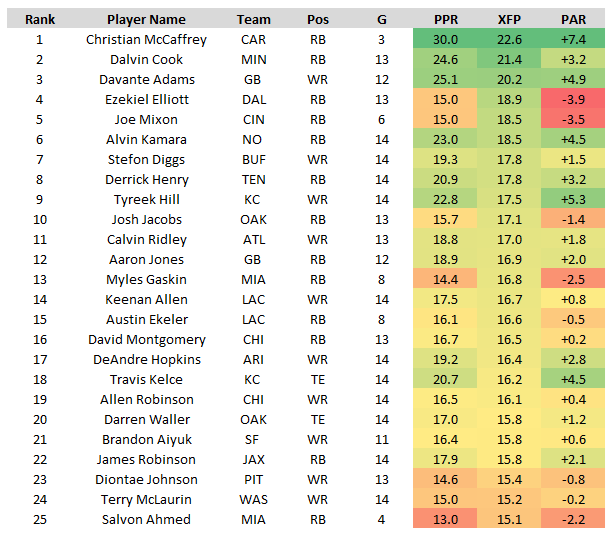 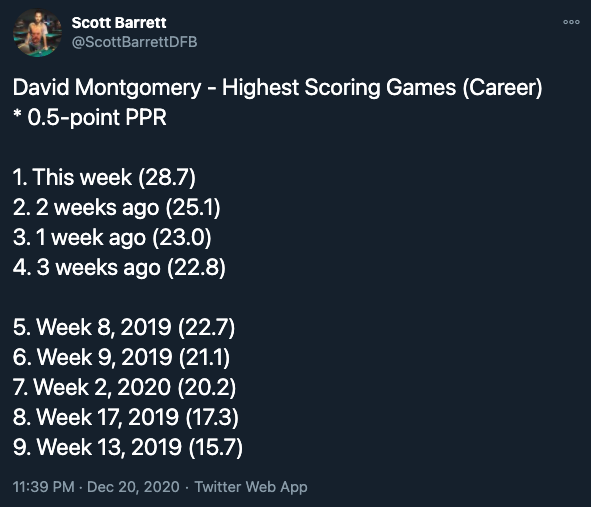 Montgomery had long been an XFP buy-low / regression candidate – in other words, he’d long seen good volume but failed to capitalize on it. But he’s finally capitalizing on it. Montgomery averaged 3.6 fewer FPG than his expectation implied from Weeks 1-9. In other words, he was one of the 3 least-efficient RBs in fantasy football. Since then, he’s been the 2nd-most efficient player in fantasy football, out-scoring his expectation by 8.6 FPG. But why?

Last week I argued this was mostly due to a soft stretch of the schedule. Montgomery’s first 3 opponents during this stretch – Green Bay, Detroit, Houston – were worth a boost of about 6.1 FPG based on schedule-adjusted FPG allowed. However, Minnesota ranked 12th-best by the same stat (-1.2), and Montgomery smashed them as well, scoring 29.2 fantasy points on a 24.7-point expectation (32 carries, 2 targets).

Minnesota was a tough test, and he passed with flying colors. I’m sure strength of schedule was still a pretty big factor, but not the only one (and maybe not even the dominant one) behind his recent success. For instance, immediately before this stretch, Chicago made two key changes to their offense – 1) Pro Bowl center Cody Whitehair moved to left guard. 2) OC Bill Lazor started calling the plays for Chicago.

Montgomery is still hard for me to trust – we have a recent 4-game sample of utter dominance, and then a larger 29-game sample of pure mediocrity – but I fully trust him to return mid- to low-end RB1 production this week, in a soft matchup against the Jaguars. The Bears are favored by 7.5-points and Jacksonville ranks 4th-worst in schedule-adjusted FPG allowed to opposing RBs (+4.6).

No matter what happens next, we finally got “Tony Pollard week.” It happened. It was glorious. And no one can take that away from us.

In Week 15, with Ezekiel Elliott out, Pollard saw 90% of the snaps (2nd-most on the week), earning 12 of 16 carries, 9 of 9 targets, and 3 of 3 opportunities inside the 10-yard-line. He totaled 37% of the team’s total XFP on the week, which led all players at all positions. And he scored 31.2 fantasy points (most) on 25.7 XFP (3rd-most). For perspective, Elliott hasn’t scored that many fantasy points in any game since 2018. Since entering the league, Pollard ranks 3rd-best of 85-qualifying RBs in missed tackles forced per touch (0.26), while Elliott ranks 53rd.

He’s an easy must-start RB1 if Elliott sits out again this week.

Through the first 5 weeks of the season, Thomas ranked right behind A.J. Green as the single least efficient player in fantasy, scoring just 30.6 fantasy points on 55.1-point expectation. That’s about when I told you could drop him. Sorry about that.

Since then, he averages 12.8 FPG (3rd-most among TEs), hitting double-digit fantasy points in 7 of 9 games, along with good efficiency (+1.6 PAR). And he’s been especially productive in recent weeks. His 16 targets and 25.7-point expectation ranked most among all receivers last week. Over his last 3 games, he averages 19.4 FPG and 10.7 targets per game. Among wide receivers those numbers would rank 10th- and 5th-best, respectively.

Start him with confidence this week, over any TE not-named Travis Kelce, Darren Waller, or George Kittle.

Swift finally saw the bell cow workload we were all waiting for in Week 10, when he totaled 16.3 XFP, earning 82% of the XFP out of the backfield. Unfortunately he missed his next 3 games due to injury, and then was eased back into playing time in Week 14, totaling just 13.9 XFP on 55% of the backfield XFP. But he returned to bell cow-usage in Week 15, totaling 20.5 XFP and earning 74% of the backfield XFP. 20.5 XFP was good enough to rank 8th-most on the week, and it came on the back of 15 of 21 carries, 5 of 5 targets, and 4 of 6 opportunities inside the 10-yard-line. For perspective, if he earned 74% of the backfield XFP throughout the whole season, he’d be averaging 18.1 XFP per game. That’d be top-5 usage, ranking just in between Alvin Kamara and Derrick Henry.

He gets a tough matchup this week – against Tampa Bay – but this usage is good enough to still start him as a low-end RB1.

- Corey Davis ranks 17th in FPG (15.2), but 45th in XFP per game (11.4). That implies a massive looming regression to the mean, but his +3.8 PAR is actually less than A.J. Brown’s 4.0. And just about every player on Tennessee has a positive PAR. So, is he a glaring regression candidate, or is Tennessee’s offense just quietly elite? I’m not totally sure. But I have him ranked somewhere in the middle of those 2 numbers this week, but higher than normal. With Jaire Alexander likely to shadow A.J. Brown, expect more volume for Davis, and probably high-end WR3-level production.

- If Cam Newton were a more-capable passer, Jakobi Meyers might be a fantasy superstar. He’s not, so he’s not. But if he were! Since Week 7, Meyers ranks 7th among WRs in XFP% (21%), behind (in order) Davante Adams, Tyreek Hill, Brandon Aiyuk, Stefon Diggs, Michael Thomas, and Calvin Ridley.

- Over the last 5 weeks, Travis Kelce (23.8) and Darren Waller (23.5) rank 2nd- and 3rd-best among all wide receivers in FPG. Yeah, that’s a massive advantage over all of your opponents, who are praying for double-digit fantasy points, and probably hearing their prayers go unanswered. Over this span, they both average a hair over 18.0 XFP per game, which is easy mid-range WR1-level of volume. Next-closest is Logan Thomas, who averages 14.0 XFP and 14.7 FPG.

- In Week 15, Aaron Jones hit a new season-high in snap% with 90%. His prior season-high was just 70%, set in Week 14. Uncoincidentally, Jamaal Williams left in the first half of last week’s game with a quad injury. Jones ranks 8th in XFP per game (16.9) and 5th in FPG (18.9), despite earning just 55% of the XFP out of the backfield this year. You don’t need me to tell you he has massive upside this week if Williams sits out.

- Excluding games in which Diontae Johnson missed time due to injury, he averages 18.7 FPG, 19.1 XFP, and 11.9 targets per game, hitting double-digit targets in 10 of these 11 games. If over the course of the full season, these numbers would rank 7th, 2nd, and 1st among all WRs. 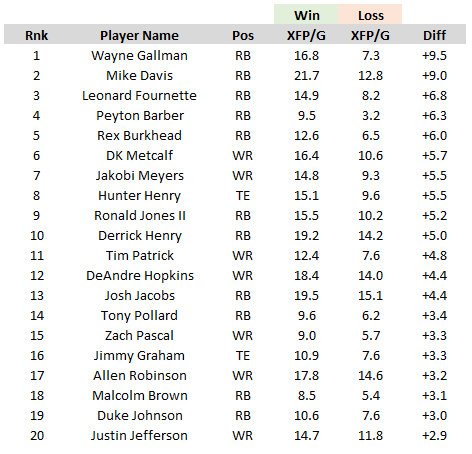 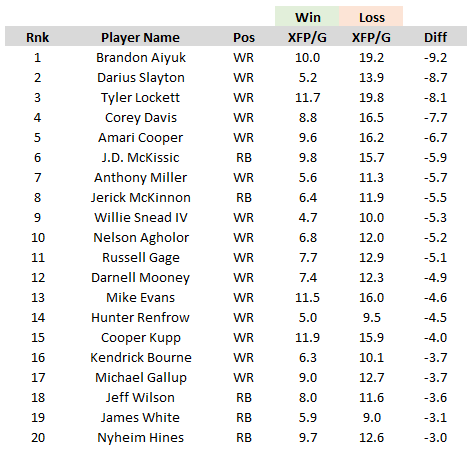 There’s a lot of noise to this sort of analysis. I’m not entirely sure why someone like Corey Davis would benefit from negative-gamescript. I suppose it’s because negative gamescript forces Tennessee to lean more pass-heavy, and he’s more of a deep threat (teams throw deep more often when trailing), while A.J. Brown is a bigger threat in the red zone (favored teams score more). But really that’s just me trying to fit a narrative. In any case…

The Titans are 4.0-point underdogs this week, which is their 2nd-worst spread of the season. As we just explained, that at least allegedly benefits Corey Davis. Darius Slayton and Russell Gage are heavy dogs this week as well, which supposedly suits them. Same for James White, as the Patriots are 7.5-point dogs this week. And the 49ers are 4.0-point dogs, which benefits Brandon Aiyuk and some of the other San Francisco players on the above chart.

The Buccaneers are heavy favorites (-10.0) again this week, which should benefit Leonard Fournette. Same for Houston (-9.0) and Duke Johnson. Chicago (-7.5) and Allen Robinson. Arizona (-4.0) and DeAndre Hopkins. The Chargers (-3.5) and Hunter Henry.

And, based on Vegas’ projections, it might be worth downgrading Wayne Gallman, Justin Jefferson, Derrick Henry, and Josh Jacobs. They’re all underdogs this week. 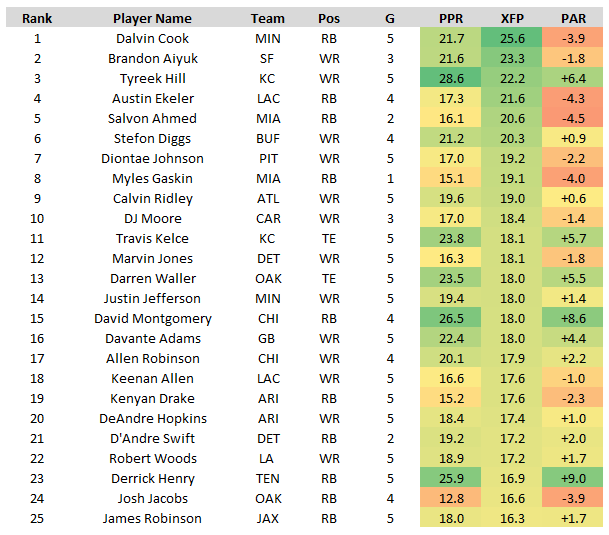 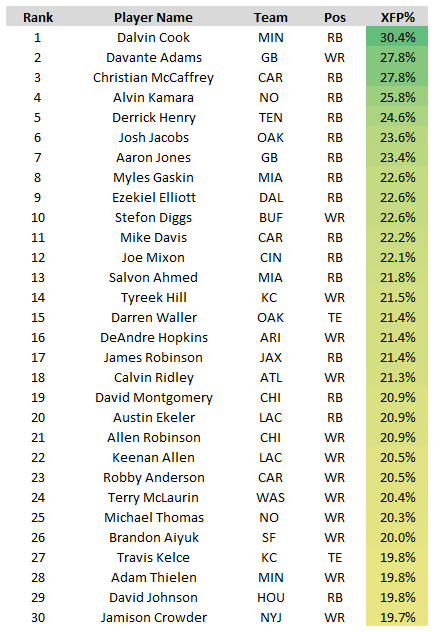