Luckily for our subscribers, we can answer all of these questions and more. But in order to do so, we first had to quantify strength of schedule. This is typically done by calculating a defense’s fantasy-point-per-game average (allowed) and then looking at the average for all players over a full season. This will also be our approach; however, we’ll be taking things one step further – we’re going to use a control for the opposing offense by measuring FPG over an opponent’s average.

For instance, last season, opposing wide receivers averaged 10.4 FPG over their season-long average when facing Miami, which ranked worst in the league. (Miami was the most favorable fantasy matchup for opposing wide receivers, worth, on average, an additional +10.4 fantasy points per game.) On the opposite end of the spectrum, wide receivers fell short of their season-long average by 7.6 points when facing New England, which ranked best in the league. (New England was the toughest fantasy matchup for opposing wide receivers.) Calculating these numbers for all teams and then applying the full-season average for all players quantifies in real terms which players had the easiest and most difficult schedules for fantasy last year. We can also use these numbers to project out strength of schedule for each team and each position in 2020.

While this methodology isn’t perfect – of course roster turnover and coaching changes will complicate things – strength of schedule doesn’t not matter. This data is still far more actionable that it is not. In fantasy football, like poker, there may only be small edges to be gained, but those small edges can be compounded to yield a massive advantage. And they must be taken advantage of, and are by the most dominant players. That’s the case with strength of schedule – another small edge to be realized, and, actually, at the polar extremes, it might matter a lot more than you’d expect. Here’s an example:

DeAndre Hopkins had the fourth-toughest schedule among fantasy wide receivers last year. His average matchup was worth -1.66 (team wide receiver) FPG. Because he was responsible for 45% of the fantasy points generated by Houston’s wide receivers last year (in games active), we can say that – adjusted for strength of schedule, or if he had a perfectly average strength of schedule last year – he would have scored an additional +0.75 fantasy points per game. This would have been the difference between him finishing fifth in fantasy points per game (17.9) and third (18.7). Looking forward, Hopkins’ schedule is much-improved (most-improved at the position) and fairly soft (eighth-softest at the position), and is roughly worth an additional +0.21 FPG. Essentially, if he had this schedule last year, he should have scored 18.9 FPG. 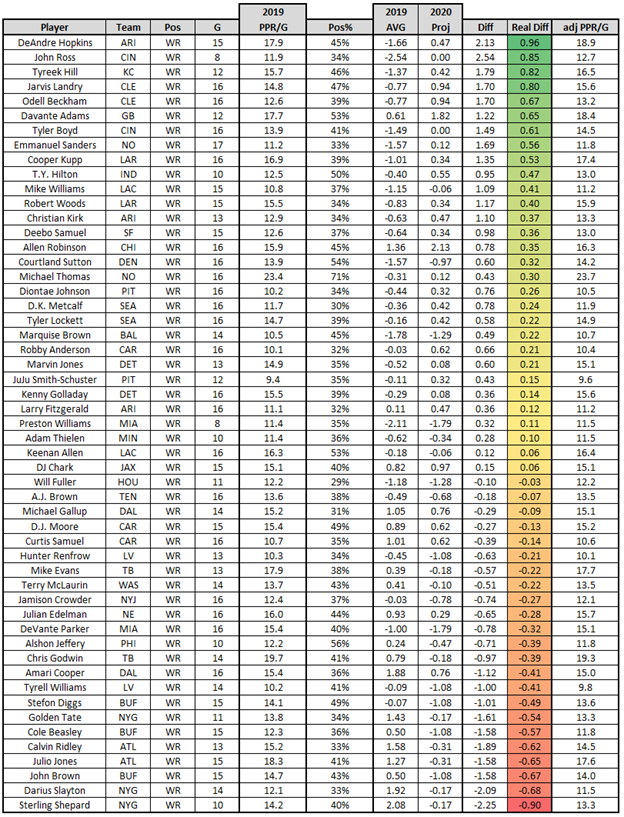 - Tyreek Hill is another big winner for strength of schedule, owning the softest playoff schedule (+4.04) and the third-most-improved schedule among wideouts (+0.82). Basically, if he had this schedule last year, he would have finished eighth (16.5) rather than 10th (15.7) in FPG. Though significant, the bigger adjustment for Hill comes from forgiving his poor injury luck. If we exclude the two games he was held under 13 snaps due to injury, he would have jumped from 10th (15.7) to third in FPG (18.4).

- DeAndre Hopkins has the league’s most-improved schedule, which should helpfully offset a likely decline in target volume. By our data, Hopkins’ schedule (-1.66) ranked fourth-toughest last year, though it was likely even tougher than that. Hopkins was shadowed a league-high 10 times last year by top cornerbacks such as Stephon Gilmore, Jalen Ramsey, Chris Harris Jr., Casey Hayward Jr., and Marshon Lattimore. Hopkins fell under 15.0 fantasy points only four times last year, and unsurprisingly, he was shadowed in all four games. Now in the NFC West, Ramsey is still a problem, but luckily Seattle and San Francisco’s cornerbacks don’t shadow.

- You can expect a full article out on Marquise Brown sometime soon – a borderline must-draft player for me all offseason; but, in addition to injuries, Brown was also disadvantaged with the third-toughest wide receiver schedule last year (-1.78). Only John Ross (-2.54) and Preston Williams (-2.11) had a more difficult schedule. His schedule is still tough, but ranks better overall (+0.22).

- Allen Robinson (+2.13), Davante Adams (+1.82), and D.J. Chark (+0.97) should all benefit from our first-, second-, and third-softest schedules this season. Perhaps Adams especially – he was our third-most schedule-sensitive wide receiver last year, averaging 24.3 fantasy points per game in above-average matchups and 15.0 in all other games.

- Odell Beckham Jr. just had the worst year of his career, and by a landslide. This was likely primarily due to injury, and then poor play-calling, but also a brutal schedule. Beckham had the eighth-toughest strength of schedule among wide receivers; but, digging deeper, it was probably a good deal tougher than that, routinely drawing shadow coverage from an opposing defense’s top cornerback. According to PFF, last year Beckham led all of 79 receivers in percentage of routes lined up against a top-35-graded cornerback (44%).

- Not coincidentally, Jarvis Landry – who will also see an improvement in schedule (but not to the same degree as Beckham) – had three of his four highest-scoring games when Beckham was shadowed.

- Courtland Sutton has seen his dynasty ADP plummet following the arrivals of Jerry Jeudy, KJ Hamler, and Albert Okwuegbunam, but that might be a mistake. What Sutton did last year, with the league’s fifth-toughest wide receiver schedule (-1.57) was nothing short of remarkable. In spite of that disadvantage, Sutton finished second in yardage market share (36%), 10th in PFF grade, and 12th in yards per route run (2.08). In the AFC West, he’ll still face off against Casey Hayward (PFF’s highest-graded cornerback over the past three seasons) and the Chiefs (who gave up the fewest fantasy points to outside wide receivers last year) twice each last season, so his schedule is tough once again, but don’t sleep on his talent.

- The Miami Dolphins have the league’s toughest schedule for wide receivers (-1.79) and the second-toughest postseason schedule (-4.10), and DeVante Parker surely bears the brunt of that, facing off against Stephon Gilmore and Tre’Davious White twice each per year. This could open things up for Preston Williams, who, was actually out-targeting (59 to 48) and out-producing (428 yards to 400) Parker prior to injury.

- Sterling Shepard saw the biggest decline in strength of schedule (-0.90), which is just another reason to avoid him in fantasy drafts. The primary reason, however, is that, with Golden Tate in the slot, he’ll be playing out of position again in 2020. Last season, Shepard averaged 1.89 yards per route run from the slot but only 1.11 when split out wide. He averaged 16.8 FPG when running over two-thirds of his routes from the slot, and only 10.9 fantasy points per game when running under a third of his routes from the slot.

- In addition to more target competition (after CeeDee Lamb was drafted in Round 1), Amari Cooper’s schedule just got a whole lot tougher (-0.41). This is big – and perhaps more so than for any other player. That’s because Cooper has long been the most volatile and matchup-sensitive player in fantasy.