There are a lot of bad, worthless, noisy, and overused stats in fantasy football. “Touches,” for running backs, might not be at the top of the list… but it’s close. 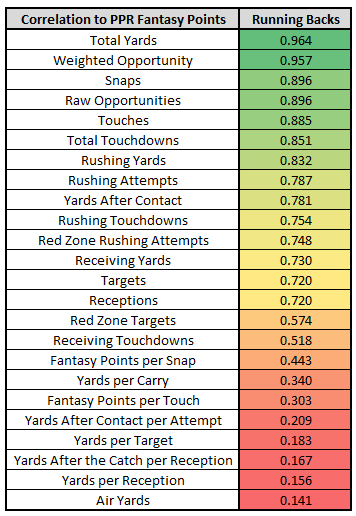 BROADLY SPEAKING, OUTSIDE OF THE RED-ZONE, A TARGET IS WORTH 3.0 TIMES AS MUCH AS A CARRY IN PPR LEAGUES.

With this knowledge at our disposal, we can better approximate the value of a player’s role than through raw touches. By multiplying a running back’s red-zone carries by 1.35, red-zone targets by 2.29, outside-the-red-zone carries by 0.49, and outside-the-red-zone targets by 1.48, we can sum up these numbers to create what I’ve been calling a running back’s “weighted opportunity.”

Using the methodology I outlined above, here were 2021’s top-30 running backs by weighted opportunity per game: 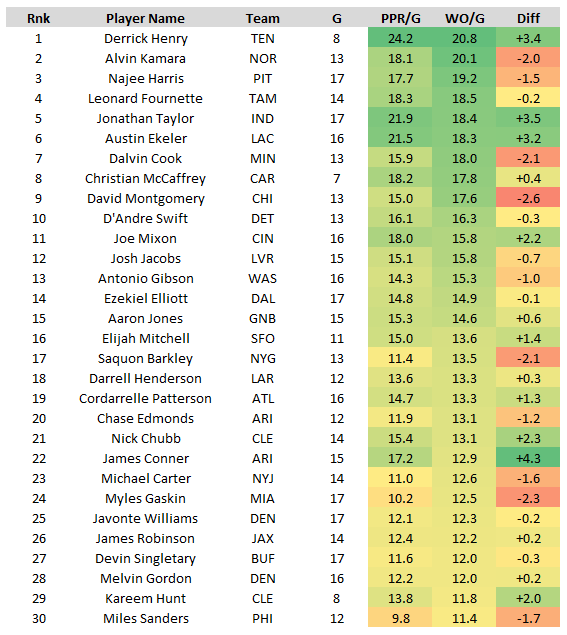 Should we be avoiding players with a negative differential (assuming this represents a measure of efficiency, and thus, skill) or should we be targeting these players (assuming this is a number that tends to regress to the mean)? This isn’t an easy question to answer, but it’s mostly the latter, while still being some of the former.

So, is Henry a regression candidate? I’d say probably not. A +3.4 differential isn’t inordinately high, and is actually less than Henry’s average over the past three seasons (+3.9, best at position).

But, typically, we should expect a heavy regression to the mean. And the higher the differential, the greater the regression to the mean. Of the top 40 seasons this past decade (by positive differential), 34 regressed the following year (85%). On average the fall was from a differential of +3.49 to +0.47. Of the bottom 40 seasons this past decade, 39 regressed (positively) in efficiency the following year. On average the climb was from -3.09 to -0.69.

Therefore I’d wager that James Conner’s league-high +4.3 differential is going to regress heavily to the mean. Or at least his mean (+1.9 over the last three seasons). This doesn’t mean that he’ll necessarily regress in fantasy points per game or weighted opportunity points per game, only that the differential between those two numbers is very likely to be much closer to zero (though still likely a little above average) next season.

To help aid in our analysis, here are the top-20 RBs by ADP alongside their differential over the past three seasons combined: 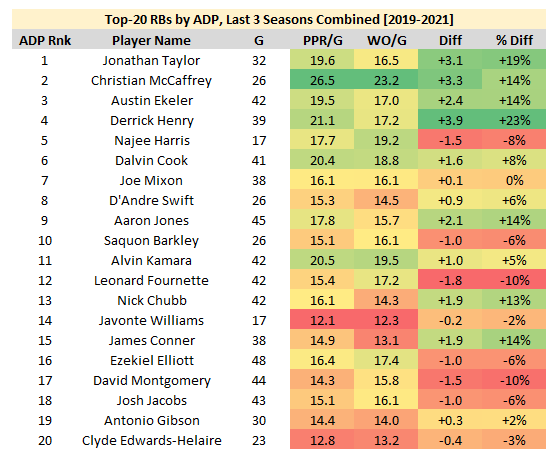 Notes: All RBs who failed to play in at least 17 games over this span were removed from our sample.

These RBs should be at the top of our lists when projecting a negative regression to the mean. But, again, remember, Jonathan Taylor’s mean is going to be a lot higher than that of a league-average RB.

For all of these players, we should be expecting a (positive) regression to the mean next season. But then again, that doesn’t necessarily mean we should be expecting more fantasy production – only a positive increase by differential. And it’s entirely possible, and I think probable, that all three of these RBs will see a massive reduction in volume next season (due in part to their abysmal efficiency last season).

3) The primary narrative working against Christian McCaffrey is that he is “injury-prone,” after missing 23 of a potential 33 games over the past two seasons. I think that’s fair. In conjunction with that, there’s also concern that (in light of these injuries) Carolina may scale back McCaffrey’s usage in 2022. I also think that’s fair; I just don’t think it should have any bearing on his current ADP (RB2). Basically, there’s a massive fall-off from “most valuable workload in all of fantasy” and “still a top-3 fantasy RB.”

His 25.5 weighted opportunity points per game in 2019 is the most by any RB this past decade, and his average over the past four seasons (22.4) would have led all non-CMC RBs in any of the past three seasons. And then factor in his obscene levels of efficiency – +3.1 over this span, including an all-decade high of +6.8 in 2020 – and I’d be okay with spending upwards of 60% of my FAAB budget on him if I knew he’d stay healthy all year. 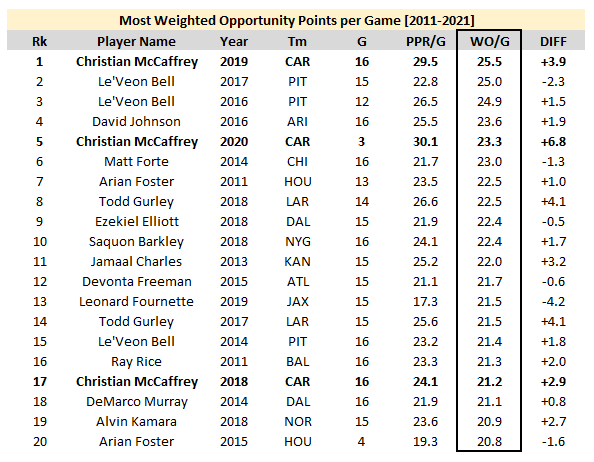 4) As I argued heading into the 2020 season, when he finished 1st fantasy points at an ADP of RB4… Again, I’m expecting a significant positive efficiency regression from Alvin Kamara this season. Why? Because he’s only ever been obscenely hyper-efficient or fighting through injury – 2019 (ankle, knee), 2021 (knee).

Granted, maybe the decline in efficiency wasn’t entirely due to injury. The loss of Drew Brees – a future-Hall of Famer who always targeted RBs at the highest rate in the NFL – surely played a role. And now Sean Payton is gone as well – who is a nearly unrivaled fantasy RB whisperer. Plus, Kamara could be facing a suspension of at least 6 games.

Still… His supporting cast (primarily at the QB position) should be significantly better this year. And despite everything that went wrong last year, he nearly hit a career-high and finished 2nd among all RBs in weighted opportunity points per game (20.1). If he was just as efficient last year as he’s been throughout his career (+2.3, +12%), he would have finished behind only Derrick Henry in FPG (22.4-22.5). 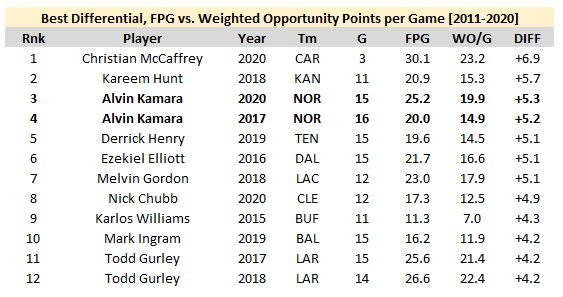 So, although he clearly does carry some level of risk, I think all of that – including the suspension risk (Mark Ingram is one of the cheapest handcuffs available) – is more than baked into his current ADP (RB11). He’s a tremendous value in all formats, and especially in tournament-style best ball leagues, given his unique weekly ceiling (56.2 fantasy points in Week 16 of the 2020 season).

5) I spent some time trashing James Conner and his ADP here, predicting a (negative) regression to the mean by another key stat (XTD). And then beyond that, arguing that we’re most-likely to see a committee backfield in Arizona this season, though that’s not at all reflected by ADP (RB15)…. But, that said, it’s also possible I’m underrating Conner’s talents. He averaged only 3.7 YPC last season, but he’s also been at least as efficient as Nick Chubb over the past three seasons (differential: +1.9 or +14%).

6) I think Nick Chubb is one of those rare outliers (or supreme talents) who is always going to outscore his weighted opportunity by a significant margin. But I also think it’s incredibly silly he’s priced so much higher than Kareem Hunt (ADP: RB13 vs. RB32).

Chubb and Hunt were active and fully healthy in only 16 full games the past two seasons, and over this span Chubb out-carried Hunt 274 to 177, while Hunt out-targeted Chubb 60 to 24. In other words, the value of their respective roles was nearly identical if measured by weighted opportunity points per game (12.9 to Hunt’s 12.8). And even by FPG, Chubb wasn’t that much better, averaging 17.9 FPG (~RB8) to Hunt’s 14.9 (~RB17).

Granted, if Deshaun Watson manages to dodge a suspension, Chubb could be a massive league-winner. (He averages 3.0 more FPG in wins than losses over the past three seasons.) But that seems highly unlikely. So, instead, I really like the arbitrage on Hunt (with Jacoby Brissett at QB, and thus, plenty of negative gamescript), who averages slightly more FPG in losses than wins over the past three seasons.

And, well, what I’m getting at is – Najee Harris feels like a lock to finish as a high-end RB1.

In 2021, as a rookie, Harris had arguably the most-valuable role of any fantasy RB. Though he only finished 8th in FPG (17.2), he ranked 3rd in weighted opportunity points per game (19.2), while also becoming one of just six RBs in NFL history to have at least 307 carries and 94 targets in a single season.

Full list of RBs to have more carries and targets than Najee Harris had last season (307 carries, 94 targets):

Pittsburgh may look to reduce his snaps in 2022, but (apparently) not his touches. And HC Mike Tomlin – more than any other coach – is nearly as ardent of a bell cow-proponent as me.

So, yes, look for another high-end RB1 finish from Harris this season. And expect some improved efficiency; as it’s nearly impossible for QB-play and offensive line-play to be as bad as it was last year.

8) Much has been made of Joe Mixon’s lack of 3rd down work. But I think the impact is being overstated.

So, ultimately, I don’t really view this as a major obstacle standing in his way. And I think Mixon could still pay off his ADP in a big way even if he never assumes this role. (Although Cincinnati beat writers are once again bullish.) What might be more important, is Cincinatti taking that crucial (but anticipated) “next step” as a team – winning more games, and more games more decisively. Despite making it to the Super Bowl last year, they ranked only 8th in point differential (+84) and just 9th in win% (0.588). This is a key point, because Mixon has long been one of the most gamescript dependent players in fantasy, averaging +8.6 more FPG in wins (20.6) than losses (12.0) over the past three seasons.

9) D’Andre Swift is currently priced as the RB8, after finishing 10th in FPG (16.2) and 10th in weighted opportunity points per game (16.3). Last season, Swift handled 66.6% of the team’s snaps in games both he and Williams were able to finish. By XFP, they shared the backfield 61%/36% to Swift’s advantage. If that were a 70%/30% split in Swift’s favor, he would have averaged 19.0 XFP per game (4th-most among RBs). If that were an 80%/20% split in Swift’s favor, he would have tied Derrick Henry for the league-lead in XFP per game (21.7). So, to me, Swift holds a significant amount of untapped (bell cow) upside. And that upside also feels fairly obtainable, given Williams’ poor efficiency last year (-1.2 differential, 18th-worst of 73 qualifiers).

10) You might have noticed that Javonte Williams only barely edged out Melvin Gordon by weighted opportunity points per game, and Gordon was actually the more efficient player by differential (+0.2 vs. -0.2). In games both RBs played, the backfield was split 50%/48% in Gordon’s favor.

So, Williams this season reminds me a little bit of Jonathan Taylor last season. There’s two arguments you can make here. 1) Williams is probably going to have his upside capped working in a committee alongside Gordon, and therefore he’s a poor value at current ADP (RB14). Based on last year’s numbers, he would have needed a 75%/25% split to finish tied for 7th in XFP per game. 2) Talent always rises to the top. And Williams – despite his negative differential last season – is supremely talented (see below). Or at least far more talented than Gordon. Which is to say, he’ll be a bell cow eventually. And he showed us just what he could do with a bell cow-workload, when – in Week 13 of last season – he turned 23 carries and 9 targets into 178 YFS and 29.8 fantasy points. And this Denver offense should finally be good and scoring touchdowns, with Russell Wilson replacing Teddy Bridgewater.

12) I’d consider drafting Dalvin Cook as early as 1.04, although he’s priced as just the 1.10 by ADP. I explained my reasoning in more detail here.

13) The tail-end of Leonard Fournette’s 2021 season was eerily reminiscent of Christian McCaffrey’s all-time great / “full-on Exodia” 2019 season. He’s another player I’ve been loading up on in early drafts. I explained my reasoning in more detail here.