The last time Matt Ryan wasn’t the starting quarterback of the Falcons was in 2007. Joey Harrington was their starter following Michael Vick’s arrest (Atlanta went 4-12, Bobby Petrino resigned midseason) and they secured the 3rd overall pick as a result, ultimately taking Ryan.

After suffering through the Vick saga that tore the team apart in 2007-08, Ryan provided unparalleled consistency for Atlanta and rattled off five-straight winning seasons to start his career. They desperately needed someone to right the ship and Ryan was it. Even though 2016 and 28-3 will always be tethered to his legacy, Ryan is inarguably the most valuable player in Falcons’ history.

Now, it’s kind of fitting that Ryan leaves the Falcons to join up with the win-now Colts as Indy continues to try and slay the AFC.

Ryan simply didn’t fit in with Atlanta’s rebuild and his bloated contract forced their hand. The Falcons had to eat the largest dead cap hit in NFL history ($40.5 million) and only got a third-round pick back from the Colts in return. As a result, the Colts restructured the final two years of Ryan’s contract – locking him in for 2022 and 2023.

As part of trade, Colts are restructuring Matt Ryan’s contract with a new guarantee structure that locks him in at two years and $53.9M, per sources. https://t.co/lKtJKk40oY

Ryan’s impact on the Colts

Hopefully this goes without saying. But, even at 36 years old, Matt Ryan is a massive upgrade over Carson Wentz.

Even without Calvin Ridley and Julio Jones and while playing behind a dilapidated offensive line, Ryan still managed better numbers than Wentz last season by a massive margin. Everything about Ryan’s situation was worse than Wentz’s last year and he still was better.

Three major things from their performance last year stand out to me:

All in, Matty Ice raises the floor and the ceiling of this Colts offense. GM Chris Ballard still needs to figure out their left and right tackle spots along the line, but after making a mistake with Wentz, this is about as good of an upgrade as the Colts could have pulled off. Ryan will be able to make the lay-up throws — something Wentz couldn’t do in their playoff push last season.

Following the line of logic that Ryan is a huge upgrade for the Colts… then, no wide receiver has gotten a bigger boost in their fantasy stock so far this offseason than Michael Pittman.

Ryan has played with some of the NFL’s best receivers throughout his career, but there is still no denying that he’s consistently helped support some truly elite fantasy seasons. I did a quick study looking back at how Ryan’s receivers have fared with him under center and the results will probably surprise you.

Amazingly, Ryan has supported a fantasy WR1 (top-12 finish in points per game) in a remarkable 13 of his 14 career seasons. Last year was the only year he hasn’t done so. A whopping 24 receivers have finished as the WR35 or better with Ryan under center.

Setting the stage for a huge Pittman campaign in 2022… 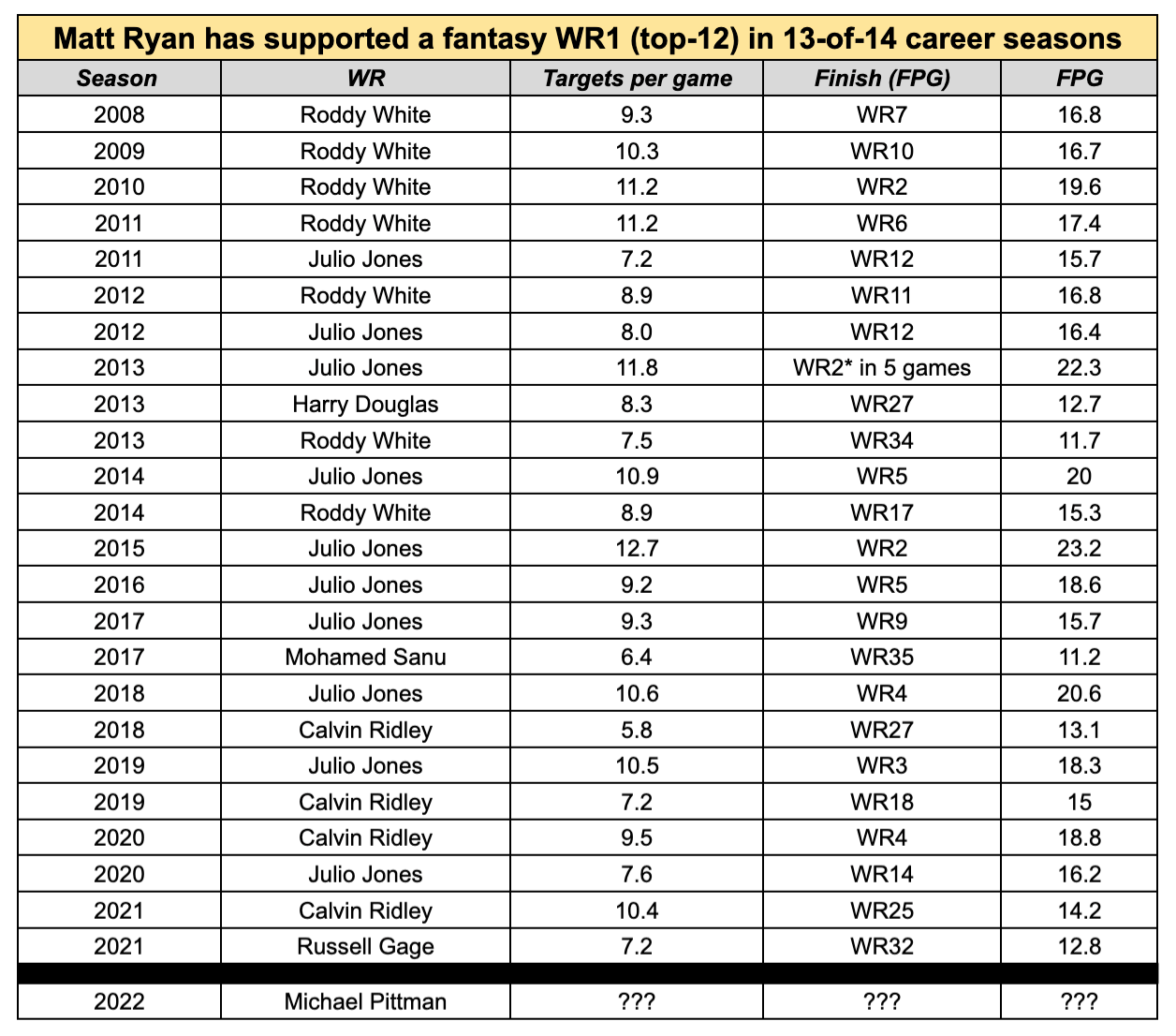 Coming off a nice breakout last year with 88 receptions, 1,082 yards, and 7 TDs (13.9 FPG – WR30), Pittman is set up perfectly to be Ryan’s top target. Sure, the Colts foundation will still be on the back of Jonathan Taylor, but there is no one in Indianapolis that can legitimately threaten Pittman for a big time target share. This is a huge caveat that it’s March 22 and the Colts have to find more depth at receiver, but I think Pittman has the potential to finish top-8 in targets.

I don’t have any skin in the game and haven’t done a best-ball draft for 2022 yet, but I’ll go ahead and put it on wax that I’ll be significantly higher on Pittman than consensus.

A brief look forward at the Falcons in 2022

It might be a year or two late, but the Falcons and GM Terry Fontenot had no other option but to tear this roster down. Between their hellish cap situation (largely created by Ryan’s contract) and lack of talent on both sides of the ball, you can easily make the case that the 2022 Falcons will have the worst roster in the league.

That being said, I loved the move to bring in Marcus Mariota to compete for the starting job. HC Arthur Smith was a part of the Titans staff that drafted Mariota and it creates a win-win situation for Atlanta this coming season.

If Mariota isn’t good, no big deal! Atlanta will be at the top of the Bryce Young sweepstakes in 2023.

If Mariota is better than expected, the Falcons still win! Their roster is in such dire straits that they’ll probably still be in the running for Young anyway. And, by playing well, Mariota will have generated a market for a long-term starting job that Atlanta could cash-in on via trade next offseason.

As for fantasy, I’ve got to pour one out for Kyle Pitts. After flopping hard as an overly popular 4th round pick last year, Pitts is somehow going off the board earlier now at 28.1 overall on Underdog ahead of Patrick Mahomes. Mahomes has the ability to lead all players in fantasy points while Pitts isn’t even a lock for top-5 numbers at his position. If that isn’t cognitive dissonance among the masses, I don’t know what is.

Both things can be true: 1) Pitts is coming off the best rookie TE season ever and 2) his actual fantasy value is still inflated by the public.

The good news is that Pitts won’t have much competition for targets. Outside of do-it-all back Cordarrelle Patterson, the Falcons don’t have anything at receiver right now. The bad news is that the Falcons are going to struggle on offense, which will limit Pitts’ touchdown upside again.

Pitts was the No. 1 guy on my fade list last summer and, if the hype remains insane, he’ll be my No. 1 fade again.