Mac Jones will be an NFL starter for at least a decade, perhaps two, thanks to his accurate arm, and game-managing presence. Until we see him provided with a full assortment of possession-receivers, watching the Patriots will continue to be about as exciting as watching paint dry. All the same, Jones plays good football. That’s far more than can be asked from a rookie QB.

Count on seeing Damien Harris receiving a healthy carry share against a Houston run defense indulging the fifth-most rushing YPG (137.0) and the most TDs/game (2.0).

Brandin Cooks has already proven (Week 3) that he can overcome Davis Mills to be useful. But any defense featuring an above-average secondary is simply going to shade multiple defensive backs to Cooks’ side without anything resembling a second receiving threat. New England is not in the business of using double coverage on a single wideout, but Bill Belichick will align his Cover 1 in a way that smothers Cooks.

Let’s get started with the Texans, who have perhaps the worst team in all of fantasy football. That’s with the exception of WR Brandin Cooks, who leads all receivers in target share (35.1%). The Patriots are giving up the 4th-fewest FPG to opposing WRs, so Cooks is more of a volume-based WR2/3.

Cooks is the overall WR9. At the other positions, their best players are David Johnson (RB47), Tyrod Taylor (QB31, despite just two starts), and Pharaoh Brown (TE43). Their best WR outside of Cooks is Danny Amendola (WR99), whose return from injury made Anthony Miller expendable (obviously, other factors made Miller expendable for the Texans to cut him after trading for him just weeks ago). With Davis Mills starting, there’s no reason to consider any of these guys.

I think this is a bounceback spot for RB Damien Harris for the Patriots. The Pats ran for negative yards against the Bucs’ nasty defense last week, but the Texans are not the Bucs. The Texans are giving up the 14th-most FPG to opposing RBs, and are getting LB Zach Cunningham and DT Ross Blacklock from the COVID list this week, which will help. But as Brolley noted, the Texans have actually surrendered 114.0 rush YPG to RBs so far, which is 6th-most in the NFL. Given that JJ Taylor lost a fumble and got benched last week, I wonder if Harris’ overall role will expand. He ran 18 routes in Week 4, the most on the season for him so far, and the highest in the Pats’ backfield — Brandon Bolden ran 10, though he was targeted 6 times on those 10 routes. From my perspective, it’s a good sign that Harris played 61% of the snaps to 31% for Bolden in a game in which the Pats didn’t even try to run the ball. He’s a strong RB2 this week. With the Taylor situation, it wouldn’t be a shock if Rhamondre Stevenson is back on the active roster soon.

For the first time all season in Week 4, Pats WR Jakobi Meyers ran more snaps out wide than he did from the slot, but perhaps that was because the Bucs are so banged up at CB overall. For my money, I hope that continues in Week 3, because while no one would confuse this Texan defense with “good,” slot CB Desmond King has been strong this year, allowing just 3 receptions on 83 slot coverage snaps, per SIS (Cole Beasley had just 2 catches total last week). That’s important to note, because Meyers still has not scored in his entire NFL career despite 112 catches. Still, he’s the apple of Mac Jones’ eye, and he has 9-plus targets in three of four games this year. That’s tied for #2 in the NFL — only Cooper Kupp has done so in every game thus far. He’s a WR3, but ideally in PPR. Look at this list of players with 9 or more targets in three or more games. Meyers is in some elite company: 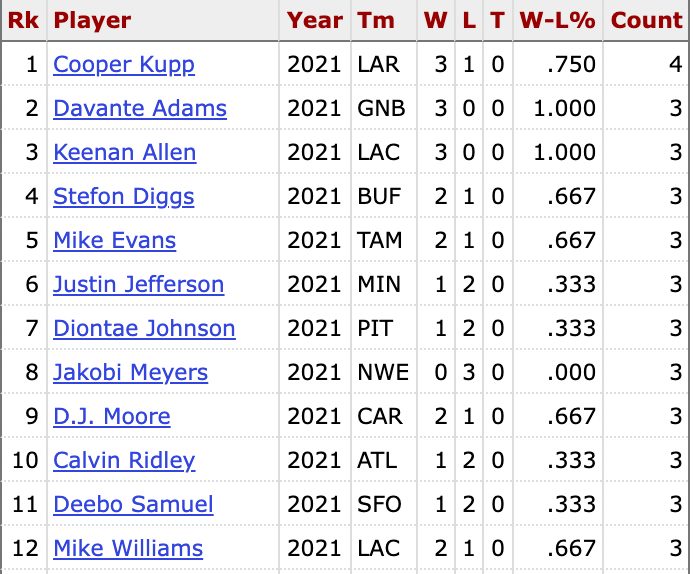 The Texans are giving up the 2nd-most FPG to the TE position this year, and as Brolley noted, if you’re playing a Patriot TE, it’s got to be Hunter Henry over Jonnu Smith, given his edge in routes, targets, and production. Smith — not Henry — has been the Patriots’ primary in-line TE, while Henry has played out wide and in the slot more.