After the Texans accidentally won last week, this game will go a long way in determining the No. 2 and No. 3 overall pick in the 2022 draft. Houston generated just 190 yards of total offense and ran the ball 38 times compared to 24 runs last week in the pouring rain in Tennessee. I’ll bet their pass | run splits normalize here in a much easier matchup.

Meanwhile, the Jets scored either a FG or TD on just 22.8% of their possessions in Weeks 1-5 with Zach Wilson under center. Only the Jaguars (22.2%) were worse. Their average point differential on the scoreboard in that span was 9.3 points. Only the Lions (9.7 point differential in Weeks 1-5) were worse. I get it – they’re playing against the Texans – but it is impossible to have confidence in this Wilson-led attack coming off of a long layoff. My guess is that Jets OC Mike LaFleur tries to come out and run the rock early to get his rookie QB settled.

Houston has played the third-most difficult schedule this season. And they’ve faced a who’s-who of the top defenses over the last nine games. The last time they faced a team of New York’s calibur, the Texans racked up 449 total yards and 37 points against the Jaguars in Week 1. With Jacksonville’s defense playing far better of late, Week 12 may be this offense's last chance to stroke their egos. During the last four weeks, opposing WRs have requisitioned 46.1 FPG from NYJ (third-most), 52.3 over the last two (the most). It’s no guarantee that Brandin Cooks sees coverage from Michael Carter II more than from any other Jets’ defender since he lines up at a different location on what seems like every play. Without a ground game to speak of from Houston, Cooks should garner another of those 30+% target shares.

Jumping on the Elijah Moore bandwagon would be extremely easy after averaging 20.5 FPG the last three weeks. And I was as high as anyone on Moore during the pre-draft process. But it’s just too difficult to trust that Zach Wilson will know how to get him the ball.

I’m sure America’s waiting with bated breath for this ripsnorter. The only thing that surprises me about this game is that the NFL somehow didn’t manage to stick this one as the Thanksgiving nightcap.

It will mark the return of rookie QB Zach Wilson to the lineup for the Jets. As you can see, the Jets’ offensive metrics are vastly different with Wilson at QB vis-a-vis without (via SIS): 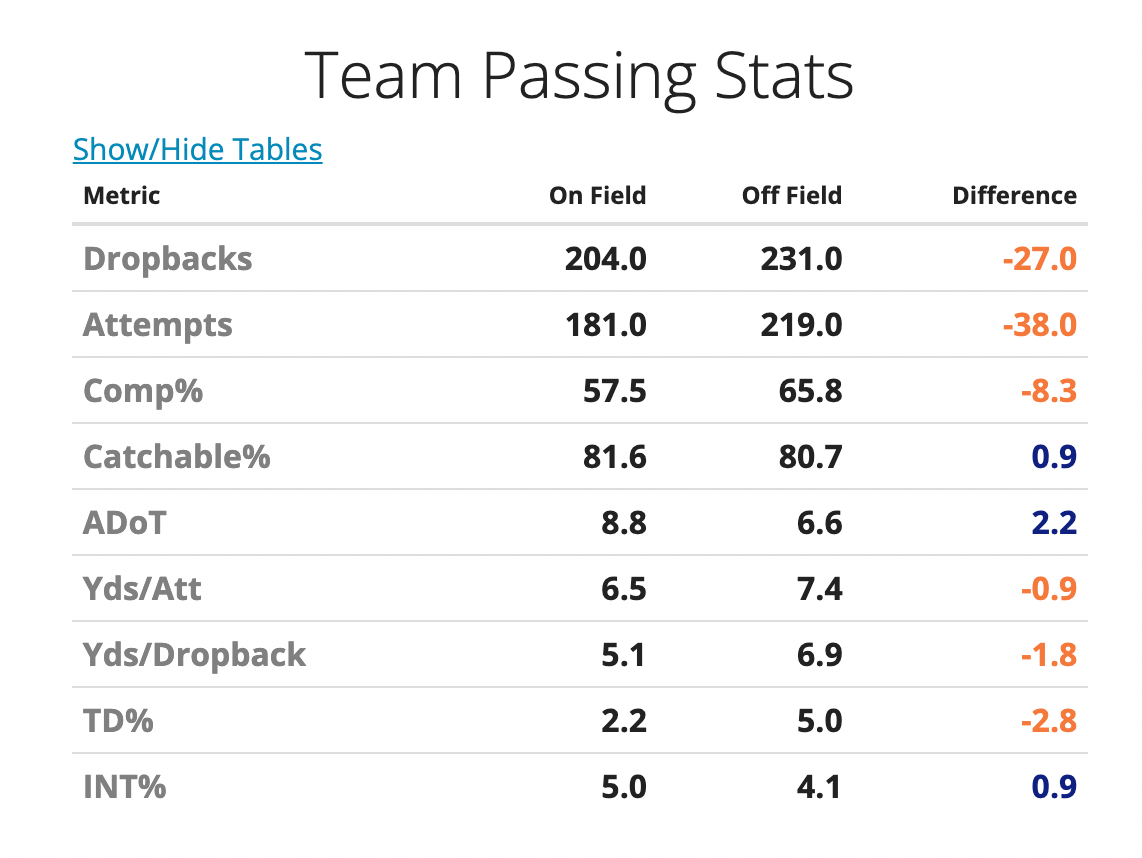 A couple of things stand out to me. First of all, Wilson has been far more aggressive as a thrower than Mike White, Joe Flacco, and Josh Johnson have been. But that is also to Wilson’s detriment. And the Jets’ blocking statistics also suggest Wilson is not handling pressure well: 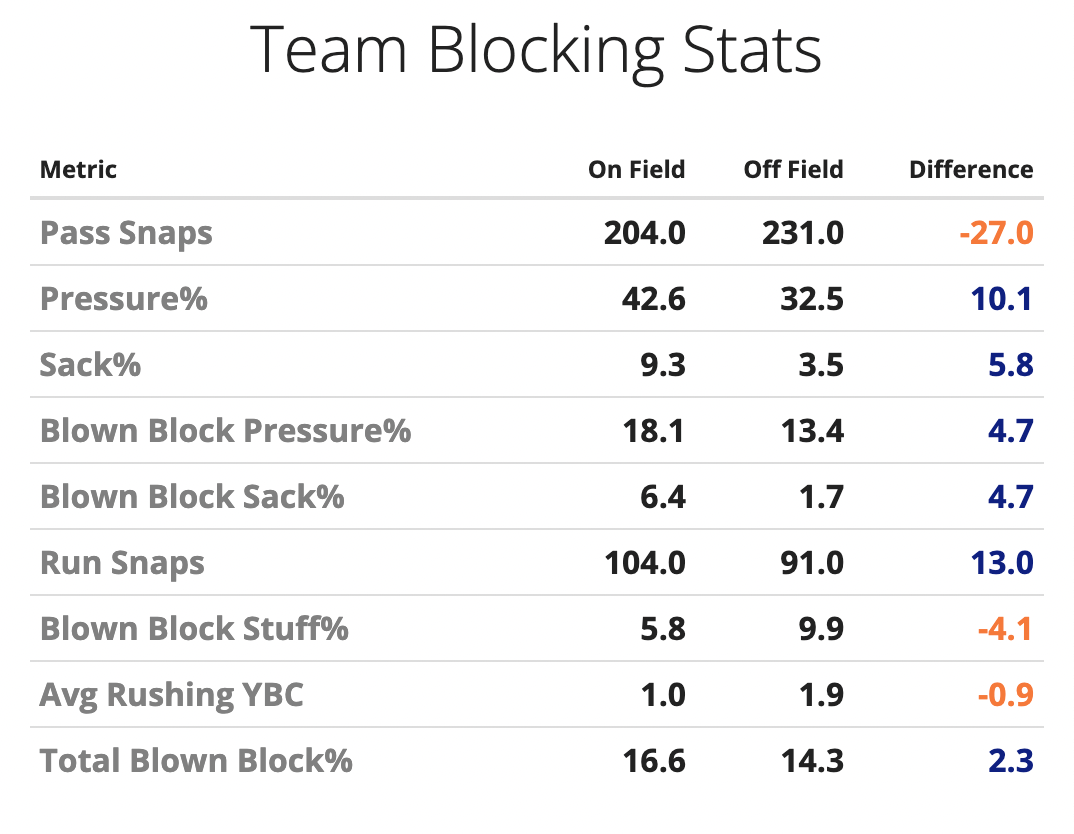 The offensive line has performed better without Wilson in the run game, but sacks are very often a QB stat, and Wilson was taking them about three times as much as his veteran teammates were.

However, the Jets have no choice but to roll with the rookie in this one.

Jets QB Mike White actually tested positive for COVID-19. QB Joe Flacco was deemed a "close contact," but since he's unvaccinated he won't be cleared to play in time for Sunday.

The Jets were going to start Zach Wilson at QB even before this COVID news, per a source. https://t.co/OovMW41nsA

One thing that has also improved for the Jets since Wilson sat was the run game, specifically rookie RB Michael Carter. But Carter is going to miss multiple weeks with a high ankle sprain, which leaves this backfield to Ty Johnson and Tevin Coleman. To these eyes, Coleman has looked cooked this year, but New York is likely to use him as an early-down complement to Johnson, who has nearly double the receiving yards (271) as rushing yards (144) this season. I prefer Johnson as an RB2/FLEX — he outsnapped Coleman 15 to 11 when Carter left the game last week.

Hopefully, the return of Wilson to the lineup doesn’t kneecap Elijah Moore, who has been used a bunch recently. Here’s Graham from Stat-Pack:

Moore should be important — WR Corey Davis is questionable with a groin injury.

There’s really not much to say about the Texans. They cut RB Phillip Lindsay this week, which means the beneficiaries of their glorious matchup on the ground against the Jets will be… Rex Burkhead (18 carries for 40 yards last week) and David Johnson (13 carries for 18 yards last week). It is an incredible matchup… but “use at your own risk” seems to be prudent here.

Otherwise, WR Brandin Cooks has totaled 8 catches for 74 yards on 17 targets since Tyrod Taylor returned to the lineup. He’s a WR3.