For fantasy purposes, it’s better to have players in games that feature teams that play fast and run a lot of plays. Why? Faster paced offenses drain less clock in between plays which gives the game more overall play volume. And more play volume = more opportunities.

In this weekly column, I’ll highlight a few games that project for more pace and plays and some spots that could underwhelm.

On a weak Week 8 slate that could be impacted by wind and weather across the league, this might be the game of the week. The Titans and Bengals are two of the fastest-paced teams in the league and it’s forced both sides into plenty of shootouts so far. While the Titans are fourth in pace (seconds per play) and eighth in plays per game (66.3), the Bengals rank 11th in pace and they are ripping off the second-most plays (72.3). Because their defense is just average and their offense is playing so fast and scoring a ton of points, Tennessee has been involved in five-straight shootouts with each of those contests going over 50 points. Joe Burrow and the Bengals pass-heavy offense have been in plenty of points-fests in recent weeks, too, with their games combining to score over 58 points in three of their last four. Getting this game right will be critical for DFS this week.

Coming off of a monster 347-yard, 3 TD (with 9/66/1 rushing) performance last week against the Jaguars, Justin Herbert finds himself in a much tougher spot here on the road in Denver. Still, this game has sneaky upside. The Chargers aren’t usually known for making sharp decisions, but they’re actually letting Herbert loose. And it’s working! The Bolts come into this game third in FootballOutsiders pace and their lightning-quick offense is a part of the reason Herbert is having so much success in fantasy. Not only has he been efficient — Herbert is seventh in passer rating and third in yards per attempt — he has the volume to back it up. Through five starts, Herbert is averaging 41 dropbacks per game — which is tied with Deshaun Watson for seventh-most. While the Chargers should dictate the flow of this game as 3-point favorites, the Broncos are no slouches either (15th in pace; 9th in plays per game). Divisional games are usually slightly lower scoring than non-divisional matchup and that’s why the game total is so low (44.5), but this game has a path to the over if the Chargers continue to just let Herbert ball.

This game has the highest total on this slate (54) for two obvious reasons: 1) Russell Wilson is the MVP and 2) the Seahawks defense is allowing a league-high 368.8 passing yards per game. All six of Seattle’s games have combined to score over 53 points this season and four of them have gone over 63 points. So, yeah. We should expect a shootout here. Still, this game does feature two of the slowest offenses in the league this year with the 49ers dead last in pace (33.2 seconds in between plays) and the Seahawks 26th (31.5). Even though this matchup could have slightly less play volume than we’d ideally want, I’m just not sure it matters all that much because of the way Seattle’s games are going. HC Kyle Shanahan is going to be able to do whatever he wants on offense and Wilson can match any team’s scoring with the way he’s playing.

Let’s just call a spade a spade here. The Lions are wasting Matthew Stafford. Despite facing the Falcons laughable defense last week, Stafford went into his game-winning final drive last week with just 28 pass attempts. 28! HC Matt Patricia and OC Darrell Bevell are happier giving 35-year-old Adrian Peterson 12-15 carries per game and playing offense like it’s 1984 instead of letting Stafford loose. It makes no sense, especially considering how good the Lions weapons are. Stafford is a top-5 arm talent in the league and could be a top-12 fantasy QB in virtually any other offense. Not only are the Lions forcing Stafford to just be a game-manager, they play slow (19th in pace; 23rd in plays per game) and face an equally slow, boring offense this week in the Colts (21st in pace; 26th in plays). I have no idea why this over/under is at 50 points.

You can’t argue with the results, but Green Bay is playing slow (18th in pace; 20th in plays) and just dominating time of possession. The Packers are using 3 minutes and 11 seconds of game clock per drive, the second-highest figure in the league. And this week, they face an equally-snail paced Vikings squad that is bottom-5 in pace, plays, and time of possession. If the weather forecast holds and this game ends up being a cold, windy mess — we could see a repeat of their Week 1 affair when the Packers dominated and were on the field for a whopping 41:16 of game clock and limited the Vikings to just 49 plays. Forecasters are calling for temperatures to be around freezing and for sustained winds of 25mph on Sunday, which would be a massive downgrade to Aaron Rodgers and Kirk Cousins’ outlook. According to FantasyLabs’ trends tool, quarterbacks average 1.8 fantasy points per game below expectation when winds exceed 15mph. This game should be run-heavy and favor another big workload for Jamaal Williams with Aaron Jones (calf) likely to miss another game.

We have a number of potentially slow affairs this week, but this matchup is the worst of them all. Both the Saints and Bears are bottom-5 in pace and just like Vikings-Packers, this game has massive weather concerns. Game-time temperatures are going to be around 40 degrees in Chicago with winds sustaining around 20-25mph. Vegas is all over this game, too, and have already knocked the over/under down from 45.5 to 43.5. The good news? Drew Brees rarely throws downfield anymore, so we shouldn’t be overly concerned about him being able to complete 15 dump-offs to Alvin Kamara. 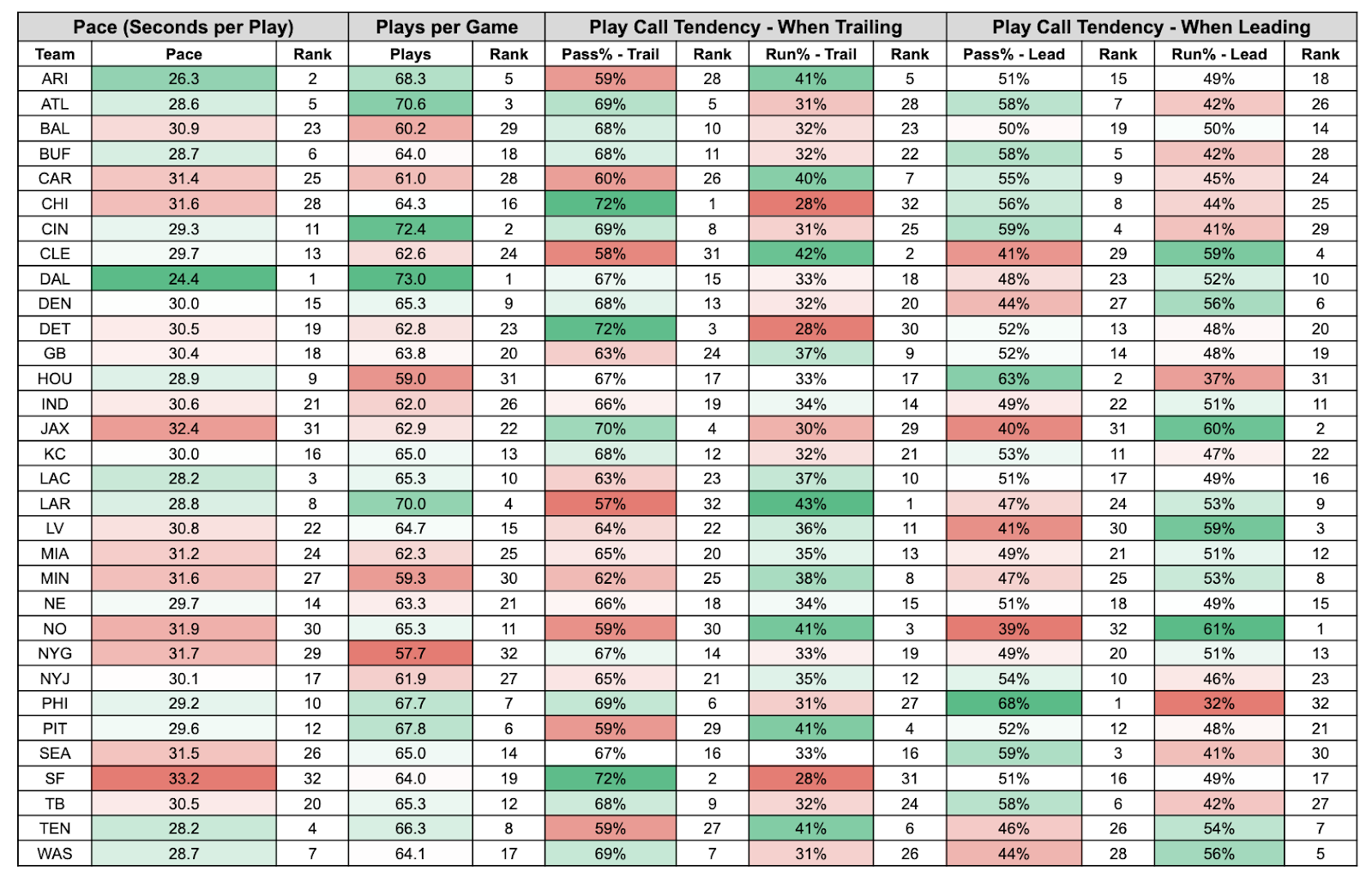