It looked like the Chiefs were going to finish one win short of hoisting the Lombardi Trophy last season before Patrick Mahomes hit Tyreek Hill on a 44-yard bomb on a third-and-15 play midway through the fourth quarter of Super Bowl LIV. The connection sparked a three-touchdown outbreak in the final six minutes to erase a 10-point deficit to help the Chiefs win by margin against the 49ers. The Super Bowl victory capped an extraordinary run for the Chiefs in the second half of last season as they won nine straight games overall while going 8-0-1 against the spread. The Chiefs made their backers plenty of money during that stretch by making the playoffs (-450) and by winning their division (-200), the AFC (+250), and the Super Bowl as the second favorite (+600) behind the Patriots. The run also helped Mahomes net the richest contract in American sports history.

Kansas City finished with a 15-4 overall record and an impressive 13-5-1 ATS mark, which included a 7-2 ATS finish in road/neutral affairs. The Chiefs finished with a 5-4 record in one-score games, and they went a perfect 6-0 in contests decided by three scores or more. The Chiefs ended the year with a 10-9 mark to over totals after scoring the second-most points per game (29.9) while allowing the 10th-fewest points per game (20.2).

The Chiefs are by far the biggest favorite to reach the 2020 playoffs at -1115 and they have the league’s highest win total this season at 11.5 victories, which is a one and a half win jump from their 2019 season win total (10). Even with Mahomes missing two games last season, the Chiefs cleared their season win total by Week 16 with a Sunday Night victory over the Bears. Entering training camp, I have the Chiefs power rated as the second-best team in the NFL (+600 to win Super Bowl LV), as the second-best team in the AFC (+300 to win the conference), and as the best team in the AFC West (-455). Baltimore is the only team I have power rated above the Chiefs entering the season, and the Chiefs are by far the biggest favorites to win their division this season with the Ravens the next closest at -225.

The Chiefs look primed for another run at 12+ wins and to defend their Super Bowl title with a roster that stayed largely intact after the 2019 season. It’s common for Super Bowl champions to have their roster raided a bit after winning a title the previous season since players are looking to capitalize on the attention they gained from playing deep into the playoffs. The Chiefs lost just journeyman interior O-lineman Stefen Wisniewski and LB Reggie Ragland from their Super Bowl LIV starting lineup — their biggest loss was slot CB Kendall Fuller.

With Tom Brady finally leaving New England, the Chiefs may have the most organizational stability in the league with HC Andy Reid and GM Brett Veach running the show. The Chiefs have reached 11+ victories in five of their seven seasons with Reid in charge — they’ve won 9+ games in every season — and organizational continuity could be more important than ever before heading into what could be the most hectic NFL season in league history.

I’ve gone too far without mentioning that the Chiefs have the NFL’s best quarterback in Patrick Mahomes, who has led the Chiefs to back-to-back 12-win seasons with deep playoff runs. Kansas City’s defense also steadily improved throughout their first season under DC Steve Spagnuolo. The Chiefs 21 or fewer points in their final six regular season games after allowing 22+ points seven times in their first 10 games last season.

The Chiefs are favored by 4.5 points or more in six of their seven games that are lined so far, and they’re short road underdogs to the Ravens in the other contest in Week 3. Using DraftKings 2020 win totals, the Chiefs are in the only division in the league with just one team that’s lined above eight or more wins — the Raiders are sitting at seven wins while the Broncos and Chargers are projected for 7.5 wins.

The Chiefs managed to get 12 wins last season even with a bumpy ride last season. Patrick Mahomes missed two games and he played at less than full strength through his knee injury even when he did return in November. Mahomes has reached 12 wins in each of his first two seasons, and Andy Reid’s teams have hit 12 wins in three of their last four seasons with Alex Smith previously quarterbacking the Chiefs.

The Chiefs will once again go over 11.5 wins this season unless their NFC West opponents finally step up and challenge them in some head-to-head matchups. Kansas City owns an incredible 27-3 record against its AFC West counterparts over the last five years, which is the best five-year stretch for any team against their division opponents since the NFL realigned divisions in 2002. 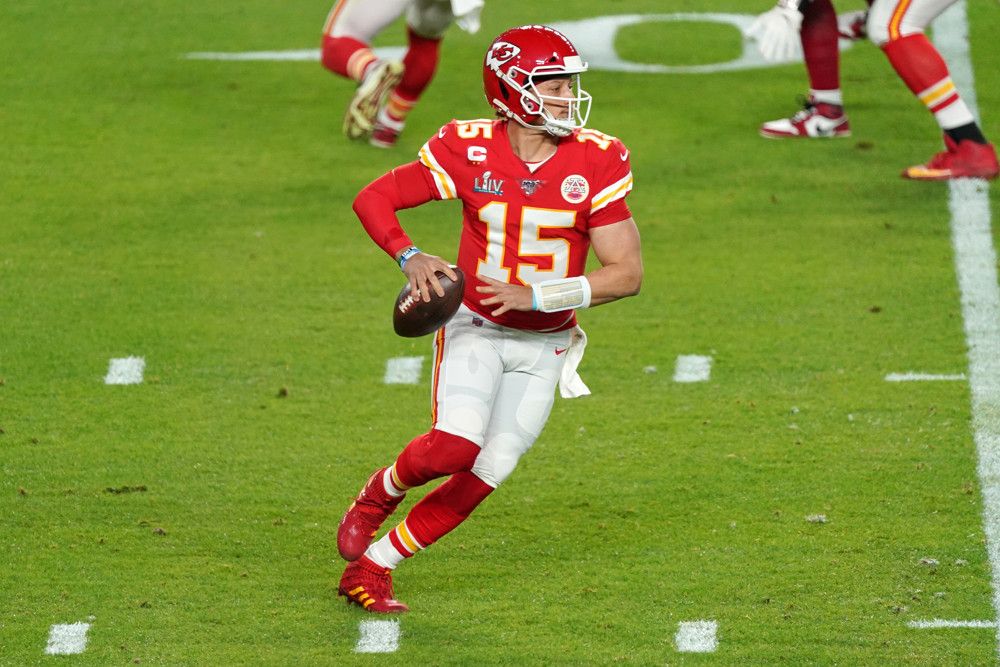 I have a difficult time getting to the window betting any team over an 11.5 season win total, and it’s made even more difficult this year with a global pandemic potentially throwing a wrench into the 2020 season. With that said, I can’t wager against the Chiefs in what is the weakest division behind them in the league, a division in which they own a 27-3 record against over the last five years. I’m only looking at their season win total as a bet on the Chiefs over the total or as a pass, and I’m strongly leaning toward the Chiefs over 11.5 wins this season.

Just like I’m not looking to bet the Chiefs under their season win total, I’m also not looking to bet under season player props when it comes to the weapons in this potent offense. We’ve been as high on rookie Clyde Edwards-Helaire for fantasy purposes as any site out there so it’s probably not shocking that I’m leaning toward Edwards-Helaire to go over 1125.5 rushing and receiving yards. Our projections are forecasting CEH to easily clear this total by 269.5 yards, and we’re clearly much higher on his potential as a receiver. We have the rookie projected as a top-10 receiving back with 480 receiving yards (30 yards per game) while DraftKings has his receiving total around 325 yards (20.3 yards per game). I would’ve made this a Best Bet a couple weeks ago but I backed off because it’s becoming even more clear that rookies are going to have a difficult time making an impact early in the season with the ever-changing landscape for this season.