What to Expect: Hamstring Strains

What to Expect: Hamstring Strains

Intro: Hamstring injuries are the most common injury among pass catchers in the NFL because of their positional demands and physiological makeup.

Expectations: Return times vary, but generally speaking, skill players will miss a mean of 1.4 games (median of 1 and a mode of 0). If the injury is a recurrence, those numbers are 1.3, 1, and 1 respectively. Overall, 33% of players will miss zero games, 33% miss one game, and 15% miss two games. Hamstring injuries recurred within two years 28% of the time and of those recurrences, 71% were within the same season. When a recurrence happened in-season, 23% it occurred in the first week back from injury. Risk factors for future injury also include age of 27 or older.

Conclusion: Hamstring injuries cause a large variation in missed time and tend to recur causing objective dips in production with a boom/bust nature once the player returns. The first week back from injury is the riskiest time to insert these players into a lineup and challenges the “start your studs” argument.

The hamstring muscle group is made up of three large muscles and a fourth smaller muscle, spanning from the bones that make contact with a chair while sitting, then down the back of the thigh, crossing the knee joint before attaching on the outside of the knee. The primary roles of these muscles are to extend the hip, bend the knee, and aid in deceleration. As is the case with all muscular strains, hamstring strains are micro-tears in several individual fibers often causing pain and swelling. Hamstrings are the third most common injury by anatomical location in the NFL and the most commonly affected positions are defensive backs and wide receivers at 23% and 21% respectively. Why is that?

The body is made of primarily two types of muscle fibers, cleverly named Type I and Type II fibers. Type I fibers have great endurance and consume a lot of oxygen over a long period of time. Conversely, Type II fibers use very little oxygen and are able to contract and relax quickly for short periods of time. The hypothesis is that greater blood flow, as is found in Type I fibers, protects muscles from overstraining meaning that Type II fibers are more prone to strains while sprinting. In addition to the natural physiology of receivers and defensive backs, the frequent stop and start nature of the respective positions can create fatigue in those muscles ultimately leading to a strain. This is why 82% of NFL hamstring strains occur without contact and primarily occur to the fastest positional groups in the league.

In this study of NFL players over a ten year period, 41% of players with the injury returned in less than a week, another 41% returned between one and three weeks, and only 18% of injuries lasted longer than three weeks. The overall average missed time among players with hamstring strains was 13 days. It’s also remarkable that in this study 34% of players who suffered an injury had a history of at least one hamstring strain dating back to college. The most important point of all is to be aware of players whose hamstring injury has been labeled “mild,” as this study points out that the first two weeks after a hamstring injury brings the highest risk of reinjury. Simply put, athletes sometimes are simply not ready to return. (Looking at you, 2019 Adam Thielen.)

Diving deeper into timelines specifically for skill players, my own research from 2016-2019 found similar patterns:

As for the mean missed time for recurrences, it breaks down as follows:

Recurrence rates are crucial to consider on a week-to-week basis as Julio Jones, Keenan Allen, and Mike Evans demonstrated in 2020. To this point, from 2016-2019 there were 55 hamstring injury recurrences (out of a total of 194 instances) within two years of the original injury. Of those 55 re-injuries, 47 were within one calendar year and 39 were within the same season. Worded differently, 20% of hamstring injuries during that four-year period were recurrences that happened within the same NFL season. What’s worse, in 9 of those 39 instances (or 23%) the player re-injured either in the first week back from injury or trying to play through the tag. This is complicated even further when combined with the fact that from 2016 to 2019, there were 25 additional instances in which a skill player tried playing through a hamstring strain and scored fewer than 5 half-PPR points.

If you weren’t weary of hamstring injuries before and just YOLO’D your way through cash games and high stakes leagues with a “risk it for the biscuit” mentality, perhaps it’s time to rethink those decisions more intelligently.

Assessing a Player’s Risk and What to Expect

As of now, there is no way to predict when and if an injury will occur, but there are certain common characteristics some players share such as being a WR or DB. Below is a chart listing modifiable (changeable) and non-modifiable (not changeable) risk factors for elite athletes as it relates to hamstring strains. This is in addition to the first one to two weeks after an initial injury: 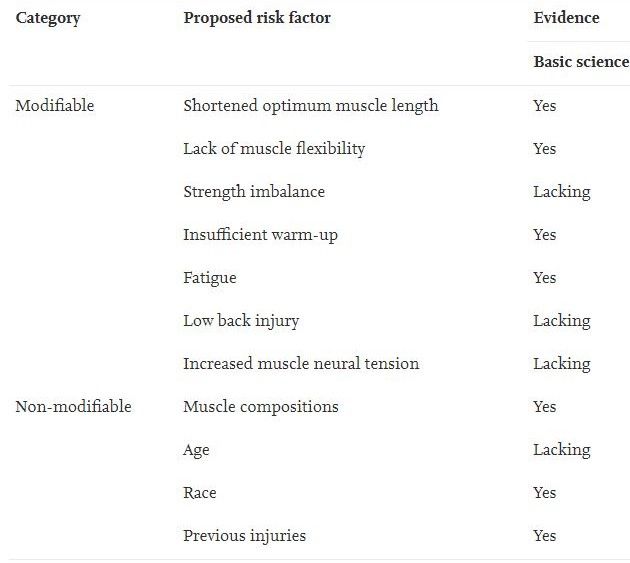 The most important point for fantasy football players to consider when analyzing a player’s risk for hamstring injury is age. Of the subjects in our NFL study who suffered a hamstring strain, the average age was 27 years old. Now, 27 doesn’t sound so old on the surface, but by that age, most players have been playing football for almost two decades. Not to mention that by age 27, many physiological factors like testosterone, strength, and bone density have peaked. That’s not to say these players are toast, it’s just that players like Julio Jones (age 32) are more the exceptions than the rule in terms of defying Father Time physically.

Note: The first edition of this article was published in the 2020 pre-season, and given the volatile nature due to the pandemic in addition to Jones’ age, it was not a shock to see him go down with hamstring injuries.

In summary, hamstring strains are the most common injury among pass catchers and vary greatly in missed time. A player is most susceptible to reinjury in the first one to two weeks after the initial injury — especially if trying to play through after limited or no practices all week. If they do play, their production suffers. Cash gamers and high-stakes players should be more intelligent in crafting lineups when hamstring injuries are involved.