With Rodgers out, a lot of the steam has been taken out of this game. The markets have adjusted the total down a whopping eight points since open and the Chiefs are now 7.5-point favorites despite all of their struggles. We have two massive competing trends converging here. First and foremost, Kansas City has been absolutely terrible ATS dating back to last year (as Brolley noted above) and they now have a great chance to pick up a much-needed win against Jordan Love making his first start. On the flipside, this Chiefs defense is awful. Like, apocalyptically bad. Kansas City has allowed 27 or more points to 6-of-8 opponents with the lone teams failing to hit that mark being the NFC East’s Washington and Giants. Can Green Bay and Love take advantage on fairly short notice? I’m not sure. Love looked like a rookie quarterback in the preseason and made some egregious decision-making errors with the ball. The good news is that this matchup couldn’t be much better and the Packers have a fantastic run game that will help lighten Love’s load.

NOTE: Each week, Huber’s Key Matchup Notes in the Fantasy Points Game Hubs are little snippets from Wes Huber’s industry-best, comprehensive Advanced Matchups bible. A DFS-slanted article typically available to only our Premium Subscribers, we are making this week’s edition FREE to coincide with our midseason price drop, with rates reduced by 50%. There is still plenty of time to get on board!

The absence of Aaron Rodgers cuts the legs out underneath everything the Packers hope to accomplish. With Mr. Rodgers in play, my money would have been invested against the Chiefs. Without him, the upside of the entire Green Bay offense is cut in half… sans Jordan Love, of course.

For the Chiefs… I’m gonna bite. The last time I listed Mecole Hardman as a Target, he returned my trust with his second-lowest output of the season (5.8 FPs in Week 7). But the Packers’ secondary losing the luxury of hiding their deficiencies is just too compelling to ignore. The defender I’ve had my eye on for multiple weeks is Chandon Sullivan. Following Jaire Alexander’s placement on IR, Sullivan has stepped in with surprising results as GBs replacement nickelback. But those numbers highlighting his success are of little interest to me this week.

Patrick Mahomes II has easily played the worst ball of his NFL career this season. But he’s completely maintained his extremely aggressive approach. And Sullivan will not only be forced to deal with aggressive lazers inside his zone to Hardman, some random gents named Tyreek Hill and Travis Kelce will also traverse his territory. But Hardman offers some interesting numbers that drew me toward him here. When working against Cover 6 during his career, Hardman leads all wideouts with 0.63 FP/Rt. He ranks second-best with 3.04 YPRR, second with 19.1 YPT, and third with a 47% increase in air yards/target.

Obviously, the news cycle has been dominated by the fact that Aaron Rodgers has COVID-19 and, because he is not vaccinated, is in danger of missing not just this week’s game — which he is out for — but next week’s game. Why? Because unvaccinated players cannot return until at least a 10-day period has passed, and Rodgers was placed on the COVID-19 list on Wednesday… meaning the earliest he can be cleared is next Saturday.

I won’t get into his Friday comments — you can find them elsewhere.

We’ve seen no meaningful in-game action from Love — just preseason — so I thought it’d be interesting to look at Greg Cosell’s scouting report from our 2020 NFL Draft Guide: 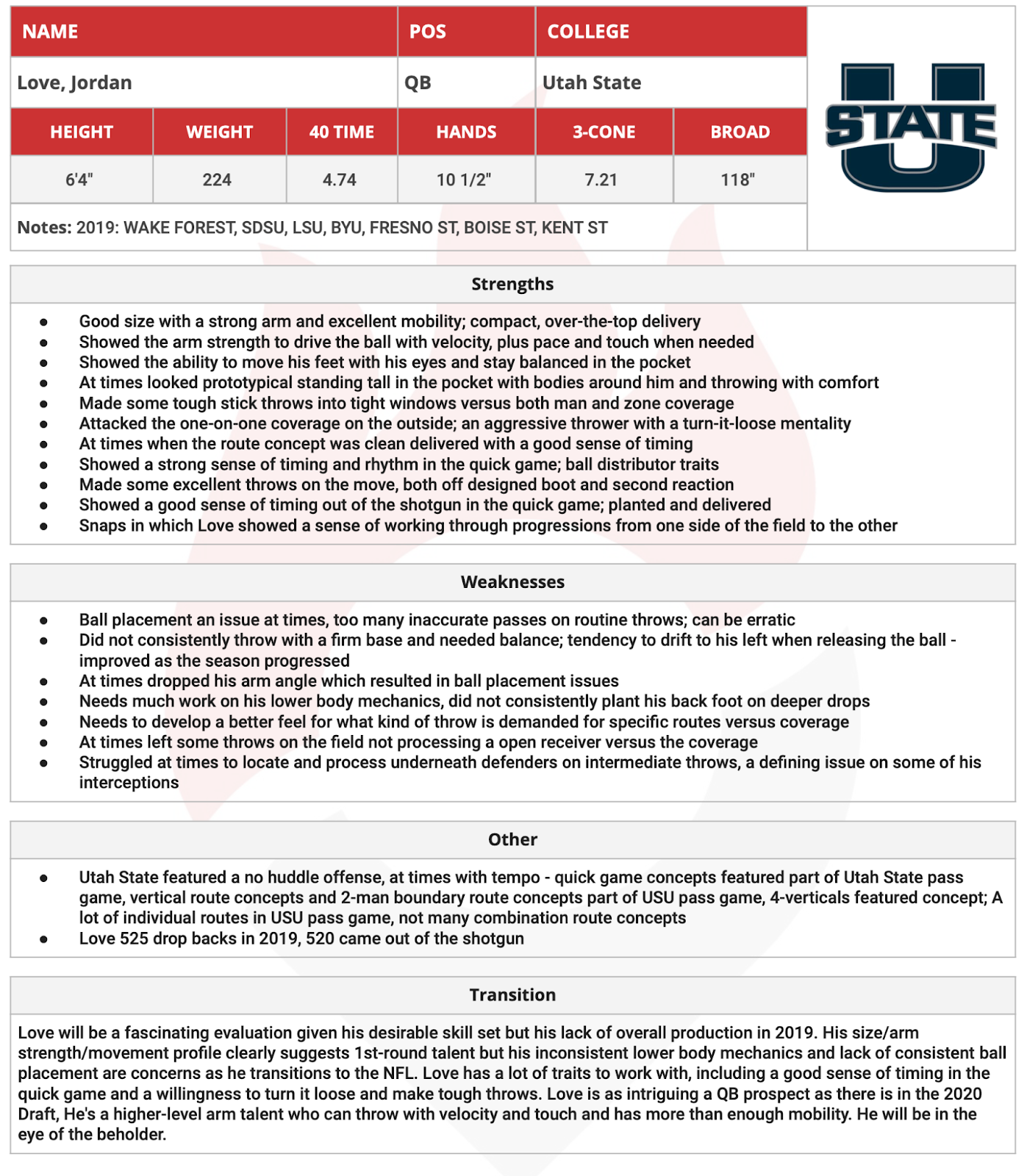 Indeed, Love was a high-level traits prospect with some red flags, which is why he fell to the end of the first round. While this is an intimidating spot for Love, it’s important to note that he’s gotten a full week of practice as the starter, and Kansas City’s defense has been abysmal.

The Ringer’s Kevin Clark has an idea of where Love should be throwing the ball:

Anyway, from a season-long standpoint, I’m going to struggle to put anyone besides Aaron Jones and Davante Adams — who is back from COVID — into my lineups, though Love does offer some intriguing upside as a QB streamer in this glorious matchup. It is interesting for those who want to take a flier of all fliers that Marquez Valdes-Scantling looks likely to return from his hamstring injury this week.

The #Packers currently have 50 on their roster and assuming they activate WR Davante Adams this week, they have room to also activate LT David Bakhtiari and WR Marquez Valdes-Scantling.

For sure, it also helps Love that LT David Bakhtiari (ACL recovery) could make his 2021 debut against a Chief defense that just acquired EDGE Melvin Ingram at the trade deadline.

The only thing people are asking about the Chiefs right now is “what’s wrong with them?” And though their sheer talent level has them at 4-4, I would think Chief fans aren’t exactly thrilled with how Patrick Mahomes has looked. Indeed, the tape does show a different Mahomes than we’ve gotten used to seeing.

Here’s what Cosell has to say:

So, yeah. Mahomes’ struggles are directly contributing to those of Travis Kelce, though Kelce might also be dinged. Kelce took a big hit back in Week 5 and had a stinger as a result. Over his last three games, Kelce’s average depth of target has shrunk to 7.1 yards. In his first five games before injury, Kelce’s aDOT was 9.6 yards.

Tyreek Hill is at least the apple of Mahomes’ eye, and Wes said up above that he actually likes Mecole Hardman this week. Good luck!

Anyway, the breakout “star” of last week for the Chiefs was journeyman RB Derrick Gore, who played just 16 snaps but posted 11/48/1 on those snaps, as the Chiefs ran it to potentially protect Mahomes (it didn’t stop Darrel Williams from dominating in the passing game, however).

Reid says Derrick Gore is a quiet kid, but a hard worker... he knew he had to work on the pass game. Also mentions he has quick feet and is a "different pitch" from other runners.