Hello, and welcome to the Week 7 XFP Report. If you’re unfamiliar with XFP, I’ll get to that in a little bit.

Through 6 weeks of action, here are the top-25 players in expected fantasy points (XFP) per game: 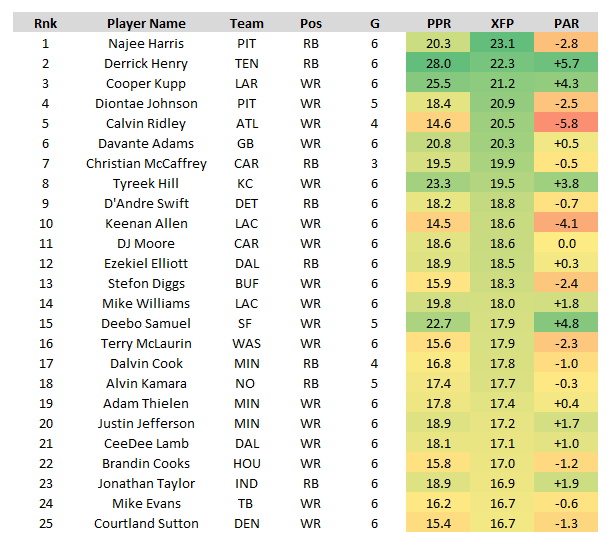 Obviously, he’s a glaringly obvious sell-high candidate with Jerry Jeudy on the mend. But with Jeudy doubtful for Week 6, you should get at least one more week of WR1 production out of him. He gets a Browns defense that ranks worst in schedule-adjusted FPG allowed to opposing WR1s (+9.0). And what that means is, basically, (based on the matchup) you can tack on an extra 9.0 points to Sutton’s 17.9-point FPG average.

With Ben Roethlisberger looking 2015 Peyton Manning-levels of cooked. And with Pittsburgh’s offensive line playing about as poorly as we all anticipated (2nd-worst in PFF run block grade), Harris is understandably a little inefficient (-2.8 PAR). But that doesn’t really matter much at all, given the elite levels of volume he’s seeing.

Basically, he’s like a slightly less efficient healthy Christian McCaffrey. Or, a more consistent and gamescript-proof but less efficient Derrick Henry. Or, a deeper cut for loyal XFP devotees, if 2019 Leonard Fournette were allowed to score touchdowns. Which is to say, he’s an elite bell cow and an easy top-3 RB at least until McCaffrey and Saquon Barkley return from injury.

Cooks was an obvious regression candidate heading into Week 6:

But, in his defense, he did walk away with a 54% YMS in Week 4 (12th-highest of any player in any week this season). And in Week 5, we expected him to flop, as New England always sells out to stop an opposing team’s top weapon. This opened things up for the rest of the offense, as QB Davis Mills posted a shocking and impressive 21/29-312-3-0 line, though only 3 catches and 23 yards went to Cooks.

What’s the difference between Smith and Brown? Efficiency.

Obviously, given the bottom-/top-10 rankings, we should be expecting a major efficiency regression to the mean for both players. But Brown should also continue to pace Smith for the remainder of the season in fantasy points scored. Smith is no doubt an elite prospect and the team’s clear WR1, but he’s also just a rookie. And Brown, meanwhile, is inarguably one of the 5 greatest fantasy WRs of all-time. Further, with WRs, it’s crucial to note the impact of QB efficiency on a player’s performance. Maybe Smith is playing well, but his QB is the bigger issue. And in this regard, Antonio Brown has a massive advantage catching passes from the GOAT.

One point of optimism for Smith-owners: WRs tend to play much better in the second-half of their rookie season, earning a 51% uptick in targets and a 55% uptick in fantasy points. That should also benefit the next name on our list, and, though it’s scary to think about, maybe also Ja’Marr Chase, who is currently on pace for the most receiving yards by any rookie WR in NFL history.

But, with QB Tua Tagovailoa back and fully healthy, I like him quite a bit more this week than these numbers imply.

On a small sample size, Waddle is averaging about 9.9 targets, 71.4 receiving yards, and 23.5 fantasy points per four quarters with his former Alabama teammate Tagovailoa under center. Clearly they have a special rapport; Waddle has comprised a team-high 26% of Tagovailoa’s pass attempts (next closest sits at 15%), a team-high 26% of his passing yards, and 100% (3 of 3) of his passing touchdowns.

Waddle’s usage was also a little different with Tagovailoa under center. In the two games he started and finished, Waddle has seen his per-game air yardage totals jump 1.87X, with deep targets per game also jumping 5.0X. But even if Waddle’s high-volume / low-aDOT-role was all he had going for him, that’d be enough for a mid-range WR2 expectation. (Basically Jakobi Meyers-plus.) Because Waddle showed in college, a target for him is more valuable than a target to just about anyone else.

FantasyPoints-favorite Diontae Johnson, remains an absolute monster. And, I assure you, he is still being severely underrated.

Over the past two seasons, Johnson has played in 20 games with Ben Roethlisberger under center. He's been hurt in five of those games and was once benched for drops. Including the two injury games this season, but removing the other four games, Johnson has hit double-digit targets in 15 of 16 games, averaging 12.1 targets, 79.7 receiving yards, and 19.6 FPG.

And he’s even more of a monster this season, hitting at least 14.5 fantasy points in 5 of 5 games (despite 2 injury games). He's finished top-10 in XFP in 4 of his 5 games this year. And you can contrast that to the position leader in XFP Cooper Kupp, who has just 2 top-10 finishes in 6 games.

The Steelers are on a bye this week, and then, in Week 8 Johnson gets an ideal matchup against the Browns who, remember, rank worst in schedule-adjusted FPG allowed to opposing WR1s (+9.0). I have no idea what his DFS salary is going to be, but I know it’s probably going to be too damn low, like it is every week.

Contrary to public opinion, Jakobi Meyers is not a massive touchdown regression candidate. He ranks just 78th among all WRs in XTD (0.98). He totals 54 targets on the season, but zero end zone targets and just one target inside the 10-yard-line. He averages just 0.16 XTD per game, after averaging just 0.14 last year. You can contrast that to CeeDee Lamb’s 0.66, who is tied with Meyers’ 9.0 targets per game. So, just know, he’s probably never as GPP-viable as you think he is.

Kadarius Toney has massive league-winning upside whenever he should return from injury. He ran just 4 routes last week, but was targeted 3 times (0.75). Over the last three weeks, he’s been targeted on 35% of his routes, ranking 2nd in between Antonio Brown (36%) and Cooper Kupp (32%). Granted, Sterling Shepard and Darius Slayton have missed some time over this stretch, but also, these aren’t ordinary targets. OC Jason Garrett is going out of his way to scheme his production via designed screens and pick plays. The way I see it, Toney could be in for a 2014 Golden Tate-type season.

Last week, Jalen Reagor scored zero fantasy points on 5 targets and 124 air yards. And, well, that's not great. But he did have 95 DPI yards (most by any player this season, let alone in one game). So, that’s a positive sign, and unless you’re Torrey Smith, something that will probably regress towards the mean over time.

Over the past two weeks, with Logan Thomas out, Ricky Seals-Jones has played on 100% of the team’s snaps, averaging 7.5 targets and 12.5 FPG. If including plays negated due to penalty, he’s averaging 8.5 targets, 74.5 receiving yards, and 16.0 FPG. He’s a bell-cow TE, so start him this week as a mid-range TE1 against a Packers defense that ranks 4th-worst in schedule-adjusted FPG allowed to opposing TEs (+4.7).

H. Roseman: “Getting him in a role where it’s not just sharing time and he’s the guy, because in terms of our bargaining power, there’s going to be no discount on Dallas Goedert. We know that, so we want to get as much information and give him as much opportunity to take over…” https://t.co/mLfcG0HySP

After Myles Gaskin barely played in Week 4 (24% of snaps), and then saw a bell cow workload in Week 5 (67%), HC Brian Flores went back to the three-way committee in Week 6. Gaskin played on just 35% of the team's snaps, in between Malcolm Brown (37%) and Salvon Ahmed (26%). Gaskin saw significantly better usage (13.8 XFP) than either Brown (3.7) or Ahmed (7.1), but he wasn't at all effective, scoring just 3.4 fantasy points… You can call Flores any name in the book, but you can’t call him a liar. He warned us of exactly this in the offseason.

With D.J. Chark out, Laviska Shenault has been moved from the slot to the outside (79%) and is now playing a full-time role (80% route share), no longer coming off the field in 2WR sets. Fantasy players have long begged for Shenault to see more target volume, and though that came last week, it didn’t amount to much (11.4 fantasy points on a 17.5-point expectation). And that’s been an issue for Shenault most of the year, falling 19.2 points short of his expectation (9th-worst)… So, is he a regression candidate or is he a trap? I suppose it depends on your initial evaluation.

Dak Prescott is in a walking boot, so maybe this isn't too relevant now, but he is a major touchdown regression candidate. He has zero rushing touchdowns despite a 2.2 XTD, which includes 6 rushes inside the 10-yard-line. Basically, this alone is the difference between him ranking 6th (23.6) and 9th in FPG (21.6).

After totaling just 11 yards on 11 targets last week, Robby Anderson is now a top positive regression candidate at any position, falling 30.0-points shy of his volume-based expectation (worst). He's seeing mid-WR4 levels of volume (12.7 XFP) but producing like a mid-range WR7 (6.6 FPG). After totaling 1,096 yards last year, and 750-plus yards in two seasons with Darnold captaining the Jets, I’m not sure what’s going wrong. Initially, I wanted to blame the inherent high-volatility of his deep target role, but he ranks just 23rd in deep targets. And he actually hasn’t been at all inefficient in that department (16.2 fantasy points vs. 20.5 XFP on deep targets). So, I’m not really sure what’s going on here.

I’ll save a longer write up for Darrell Henderson as well, who is still looking like a high-end bell cow, despite HC Sean McVay’s comments heading into last week’s game. 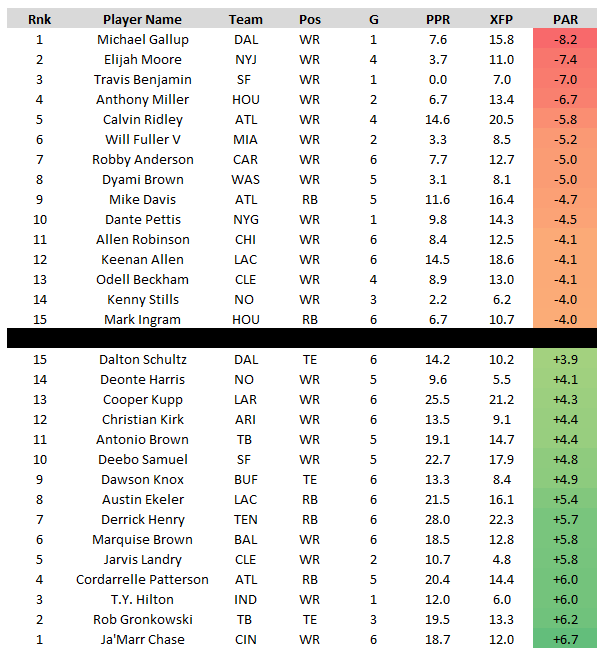