Hello, and welcome to the Week 18 XFP Report. If you’re unfamiliar with XFP, I’ll get to that in a little bit.

Through 17 weeks of action, here are the top-25 players in expected fantasy points (XFP) per game: 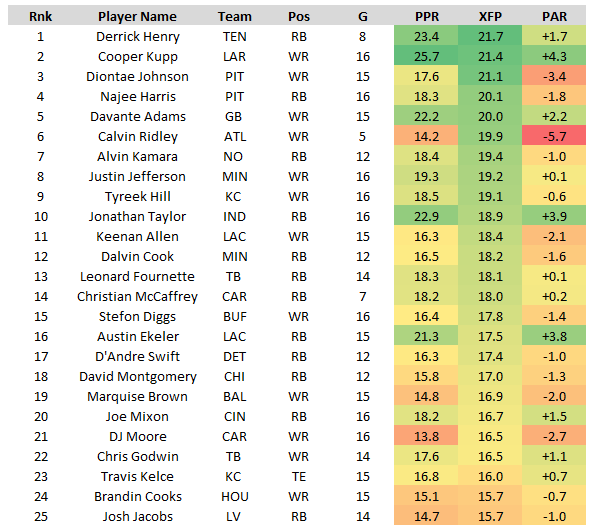 Very quietly, Meyers and Gage have had two of the toughest schedules of any player in fantasy. Meyers and Gage run (respectively) 61% and 49% of their routes from the slot, but the far majority of opponents they’ve faced are among the best teams at defending slot WRs. That doesn’t seem very fair, does it?

Good news! Both get favorable matchups this week.

Meyers gets a pillow-soft matchup against a Miami defense ranks 5th-worst in FPG allowed to opposing slot WRs (14.9). We like him as a low-end WR2 this week.

Gage gets a Saints defense that’s given up the 12th-most FPG to opposing slot WRs (14.3). We like him as a mid-range WR2 this week.

DeAndre Hopkins’ absence has led to a massively improved role for both TE Zach Ertz and WR Christian Kirk,

Though Ertz has seen the better volume (+2.7 XFP/G), Kirk has been more productive (+3.8 FPG). I have a hard time picking between them this week, but, luckily, on DraftKings you can play both. And both are popping as enticing values this week — Kirk ranks just 17th among WRs in salary ($6,000), and Ertz ranks only 6th among TEs ($5,300). And both have excellent matchups. For Ertz, Seattle ranks 4th-worst in schedule-adjusted FPG allowed to opposing TEs (+3.6). For Kirk, who has run 73% of his routes from the slot over this span, Seattle has given up the 3rd-most FPG to opposing slot WRs (15.3).

Bonus: WR Antoine Wesley ($4,100) has also seen more work of late, as his route share has jumped from 31% to 72% over this span. He’s tied with A.J. Green in target share over the last three weeks (12%), and has three touchdowns over his last two games. But both both WRs are easily fadable this week. Wesley and Green have run (respectively) 85% and 96% of their routes from the outside over this span, and Seattle ranks 2nd-best in FPG allowed to outside WRs (15.5).

Those numbers are ridiculous for any WR, but almost unfathomable for a rookie WR. He’s scored 125.0 fantasy points over his last five games, which is a feat only two other WRs have accomplished as rookies — Randy Moss and Odell Beckham Jr.

On one hand, he’s been one of the top-5 most productive, and arguably the single-most consistent, WR over the last five weeks. And he’s no doubt still a little mispriced on DraftKings, as just the WR12 of the week ($6,800). But on the other hand, it’s plausible to assume he takes a slight step back this week.

St. Brown has run 69% of his routes from the slot over this hot-streak. Each of his last five opponents ranked bottom-16 in FPG allowed to opposing slot WRs, but Green Bay ranks 12th-best (11.7).

Singletary was seemingly promoted to bell cow-status four weeks ago. Over this stretch, he’s played on 81% of the team’s snaps, while handling 83% of the carries and 89% of the targets over the backfield. He averages 15.6 carries, 4.3 targets, 15.8 XFP/G, and 18.3 FPG (low of 14.9) over this span. He ranks 5th by FPG over this span, but behind only Rashaad Penny by total fantasy points scored.

Week 18 should be another lopsided victory for the Bills, and Singletary’s best matchup yet. The Bills will clinch the AFC East with a victory, and Vegas is expecting them to win by 16.5-points, while scoring 30.0 points (most on the week).

For whatever reason, DraftKings absolutely refuses to price David Montgomery like a high-end RB1, though that’s clearly what he’s been over the last five weeks.

7.0 targets per game is a crucial stat. That alongside his 76% snap share this year (2nd-most) means he’s not at all gamescript-sensitive; he’s a true bell cow. And the numbers bear that out. He’s been incredibly consistent over this span, despite mixed gamescript, finishing 1st, 9th, 3rd, 1st, and 8th among all RBs in XFP over the last five weeks.

Braxton Berrios will not practice today. Quad. It's not serious according to Saleh.

Jamison Crowder is back. Elijah Moore will practice on the side, "full intent" to get him back out on Sunday.

Moore, reportedly, has a chance to play this week, and it wouldn’t surprise me if he does. I can see HC Robert Saleh wanting his electric young wideout to end his rookie season on a high-note.

Admittedly, he’s a little tough to trust, coming off a quad injury and then COVID-19 list. But that’s more than baked i to his salary on DraftKings, priced as just the WR43 ($4,700).

Of course it’s also a little worrisome he’s cracked 10.5 fantasy points just once with Zach Wilson under center. But he did accomplish that feat in their last game together, when he turned 12 targets into 20.6 fantasy points, and despite the handicap of running 58% of his routes against CB Darius Slay — PFF’s 4th highest-graded CB. Unfortunately, this week’s matchup looks just as tough, as the Bills rank best in FPG allowed to opposing outside WRs (13.1).

Still, if he’s active, he’s probably one of the better values of the slate.

Marquez Callaway has returned a 29.2% target share over his last four games, which ranks 7th-most over this span. Of course, on the sloth-paced and run-heavy Saints, that hasn’t amounted to much. But he has reached 95 yards in each of Taysom Hill’s last two starts, averaging 9.5 targets, 104.5 YPG, and 16.5 FPG.

Last week, Kenny Golladay ran a route on 94% of the team’s dropbacks. He earned just 1 target and failed to haul it in. He’s been the single-least efficient WR in fantasy this year, falling 4.1 FPG shy of his volume-based expectation… The Giants made him the 6th highest-paid WR in the NFL this past offseason.

Javonte Williams was atypically hyper-inefficient in Week 17, falling 12.0-points shy of his expectation. Against a Chargers defense that went into the week ranking 3rd-worst in YPC allowed (4.63) and 3rd-worst in rushing FPG allowed to opposing RBs (19.1), Williams managed just 2.1 YPC and 4.2 fantasy points on 14 carries, 2 targets, and 4 opportunities inside the 10-yard-line (16.2 XFP)… And this came one week after Williams managed just 20 yards on 9 touches… Williams averages only 1.5 YPC over his last two games, though he averaged 4.4 YPC or better in 5 of his prior 6 games and 5.0 YPC overall… Poor QB-play and bad gamescript is partly to blame, but not fully responsible, as Melvin Gordon fared slightly better. So, I think it makes the most sense to blame this recent down-stretch on injury — he’s been limited in practice all week dealing with a knee issue. 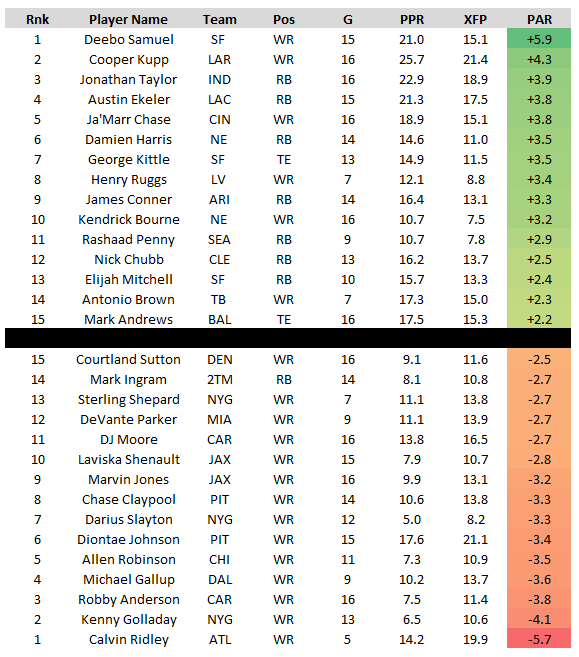